Four Cups of Coffee for Freedom—Focus on Black History 2021 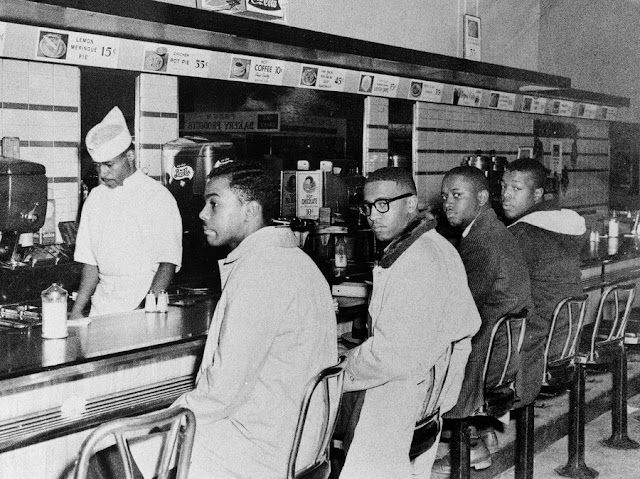 Day two at the Woolworth's Luncheonette in Greensboro, North Carolina James A. McNiel and Franklin McCain from the first day action were joined by fellow students William Smith and Clarence Henderson.  What were the thoughts of the young black man behind the counter?  About the same age as the students he may have needed the job to support his family.  Were the students jeopardizing that?  Did he view them as privileged and spoiled students?  Did he yearn to join them?

There was no charismatic leader that day, no eloquent preacher, no carefully planned campaign.  Just four young guys, freshmen no less, from an obscure public college for Negros, the Agricultural and Technical College of North Carolina.  One afternoon, February 1, 1960, they ambled over to downtown Greensboro where they causally plopped themselves down on four stools of a Woolworth's Luncheonette.  They ordered coffee.  Very politely.

In those days before chain fast food joints, the lunch counters at Woolworths, other dime stores, and drug stores were the top options for an inexpensive, quick meal while running errands in the still thriving downtowns of American towns and cities.  Woolworth's, like other chains, had a policy of “honoring local custom and law.”  In the South that meant they would not serve Blacks.  That in turn meant employees of down town business as well as customers of those stores who happened to be Black often had no place to grab a lunch or rest their feet.

It was an injustice.  Joseph McNeil, Franklin McCain, Ezell Blair, Jr. (later known as Jibreel Khazan), and David Richmond decided to do something about it.  So they ordered coffee.  The waitresses at the counter informed them that they could not serve “Coloreds”.  They politely told her that they intended to stay until they were served.

So they sat until closing, enduring the taunts and jeers of white customers.  When the store closed, they returned to the campus with the promise to return.

On the second day McNeil and McCain returned to the lunch counter with two other students.  This time a TV camera man was on hand to film their defiance.  Articles appeared in the local press.  Word was getting out.  Crowds of angry whites began to mill about the store.

On day three about sixty people from the college and community turned out in support of the rotating cast of young men in those four stools.  Word of the protest made national headlines and mention on the network evening news programs.  Woolworth's corporate headquarters issued a statement promising to continue to honor local custom.

More than 300 turned out on day four and the sit-in was extended to another lunch counter at a local Kress store. 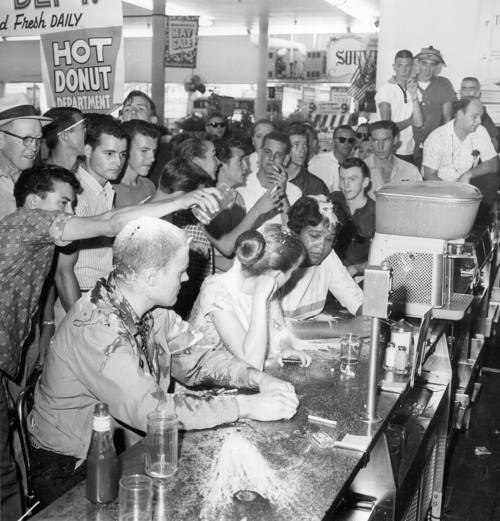 Lunch counter sit-ins spread across the South and continued for years.  On May 28, 1963 these Black and White Civil Rights volunteers were abused in Jackson, Mississippi.


By the end of the week black college students had spread the sit-ins to Woolworth stores in Winston-Salem, Durham, Raleigh, and Charlotte as well as towns in other states.  The Greensboro Four, as the original protestors came to be called, had sparked a largely spontaneous movement.

It was not that sit-ins were unknown.  The first in the South had been more than twenty years earlier in 1939 as a protest in the Alexandria, Virginia public library.  In the late 1940’s the Quaker Fellowship of Reconciliation (FOR) which was urging the adoption of Gandhian non-violent resistance, began to use the tactic sparingly.  In the early 1950’s volunteers from the Congress for Racial Equality (CORE) who had been trained by the FOR’s Bertrand Russell and others used sit-in protests in Northern and borders state cities like Chicago, St. Louis, and Baltimore.  But in the mid-‘50’s civil rights protest had moved to business boycotts, voter registration campaigns, and mass marches.  Dr. Martin Luther King, Jr., the Southern Christian Leadership Conference, and their allies at the Student Non-Violent Coordinating Committee (SNCC) had spread this brand of protest successfully in high profile campaigns.

But something about the Sit-in protests struck a chord with both the public and with newly empowered activists.  The movement spread to cities throughout the South.  In Nashville FOR trained pacifist James Lawson had already trained a disciplined cadre of students in the tactics of passive resistance who spread out over the city and surrounding area with a well-coordinated campaign. 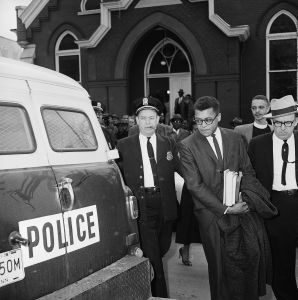 The Rev. James Lawson of the pacifist Fellowship of Reconciliation trained with Bayard Rustin in Gandhian passive resistance and organized a highly disciplined campaign of sit-ins in Nashville.  Here he is being arrested.


Meanwhile the original Greensboro students decided to declare a nationwide boycott of Woolworth's and were supported by volunteers from existing civil rights organizations including the National Association for the Advancement of Colored People (NAACP.)  Pickets showed up at stores across the country.

In far off Cheyenne, Wyoming I was 11 years old and encountered my first demonstrator of any kind—one lone guy in a sandwich board sign outside the downtown Woolworth's where I used to go for lunch every Saturday.  After a gruff beginning, “What are you staring at, kid,” I was informed about the boycott.  I had seen footage of the sit-ins on TV.  I was sympathetic.  It was the first picket line I refused to cross.

Maybe the loss of an 11 year old’s once-a-week lunch money, didn’t harm the company, but the boycott was cutting deeply into profits.  Woolworth's stores were Stone Age discount houses and were the preferred shopping places of poor Blacks across the south and in the big cities of the North.  Whites could afford the upscale downtown Department Stores.  Woolworths found its sales off as much as 30% in key cities.

The chain was also taking a beating in the court of public opinion, especially in the north.  Highly respected President Dwight Eisenhower proclaimed that he was, “deeply sympathetic with efforts of any group to enjoy the rights…of equality that they are guaranteed by the Constitution,” when asked directly about the sit-ins during a news conference.

In Nashville Lawton’s campaign paid off when they won city-wide desegregation of lunch counters in May.  In other towns local merchants capitulated as the boycotts and sit-ins ate into the bottom line. 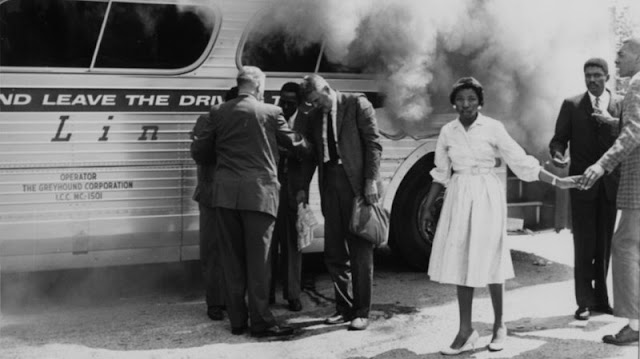 In 1961 the Freedom Riders put the sit-ins on wheels and risk their lives.


On July 25 the Greensboro Woolworth's threw in the towel.  That day they served their own Black employees for the first time.  The next day the lunch counter was officially opened to Backs not only in that town, but across the entire chain.

In the next few years the sit-in tactic was applied to all sorts of struggles for equal access to public accommodation.  The bloody Freedom Rides of 1961 put wheels on the sit-in.  The tactic helped bring about the public outcry that led to the landmark Civil Rights Act of 1963 which guaranteed equal access to public accommodations in interstate commerce. 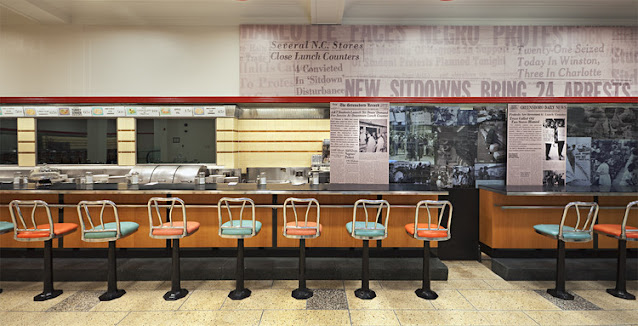 In the original building the Greensboro Woolworth's Luncheonette has been recreated in the International Civil Rights Center and Museum.


Today the Greensboro Woolworth's building has been transformed into the International Civil Rights Center and Museum.

All in all, not a bad legacy for four college kids who wouldn’t take no for an answer.

Posted by Patrick Murfin at 5:59 AM