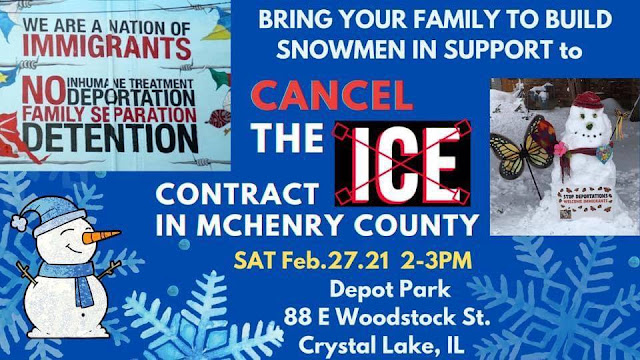 The weather prognosticators, mavens, and maybe even Woodstock Willie the groundhog say that this Saturday afternoon, February 27 temperatures will near 50° after several days above the freezing mark.  But don’t worry, we have had so much snow cover in Crystal Lake that there should still be plenty to build some snowmen and women for immigrant justice.

Community members representing 20 grassroots organizations will hold a demonstration in favor of canceling the contract between McHenry County and the U.S. Marshall's Service to imprison immigrant people on behalf of Immigration and Custom Enforcement (ICE) at the County Jail. During the family friendly event, demonstrators will be building snowmen which will be holding signs about immigrant detention.  Participants will explain the issue and testify why they are committed to this cause.  Folks out and about in downtown Crystal Lake will be invited to join. 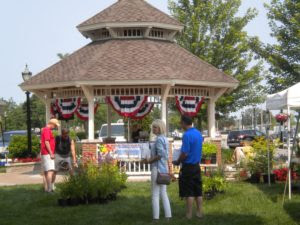 The gazebo in Crystal Lake's Depot Park in warmer weather

The event will be held at Depot Park, 88 East Woodstock Street at the head of downtown’s main drag, Williams Street this Saturday between 2 and 3 pm. and is sponsored by The Coalition to Cancel the ICE Contract in McHenry County.

For the last several months some members of the McHenry County Board with the vocal support of local citizens and residents have been pressing for an end to the ICE contract with the Jail.  So far that proposal has not yet come to a vote.  The action in Crystal Lake will be just the latest in a series of events and vigils meant to raise public awareness of the issue.

“We have met with McHenry County officials, and heard their concern that if we do not house people detained by ICE, that they will be sent to some other less humane jail. We are here to tell them that every jail is inhumane. Each dollar McHenry County accepts from ICE undermines community trust with local government, including the police, the schools, the courts, everything,” said Amanda Y. Garcia, a local attorney.

Although President Biden’s administration just released a plan that would offer a path to citizenship to millions of people, the Coalition members believe protecting the rights of immigrants at the local level is long overdue. “With the promise and hope of the new administration, we’ve been told to hold off. We’ve been told to wait and see what changes will be brought to immigration policy and reform; waiting isn’t an option anymore” said Sandra Davila, one of the community leaders and member of the Coalition. “We want our tax dollars to fund education, housing, nutrition, and health care programs, all of which create opportunities to grow and thrive,” said Davila.

The detention of immigrants is the unjust practice of incarcerating individuals while they await a decision on their immigration status or potential deportation. A different approach is possible by allowing people navigating their immigration cases an administrative procedure, to do so while still being active in their communities and not behind bars. The majority of people in detention have been living in the U.S. for many years and have not adjusted their status due to archaic laws, incredible backlogs, and an impossible maze of red tape.

Member organizations of the Coalition include:

Standing Up Against Racism - Woodstock 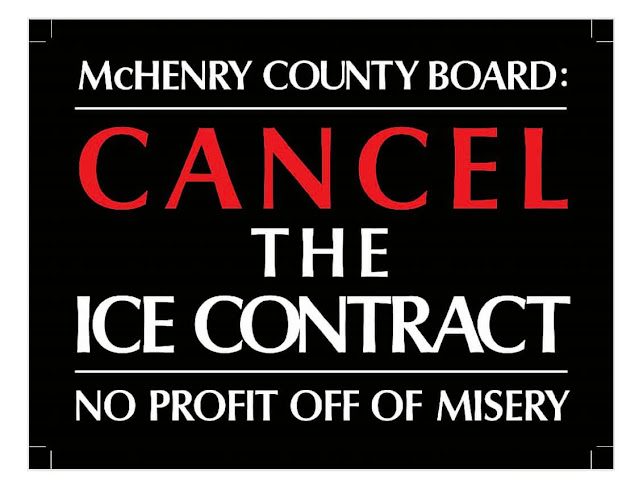 For more information on the Coalition and to keep abreast of developments in the campaign to end the ICE contract join and visit the Coalition to Cancel the ICE Contract in McHenry County Facebook Group .

Posted by Patrick Murfin at 9:00 AM