Ambrose Bierce—The Writer Who Was the Devil Himself 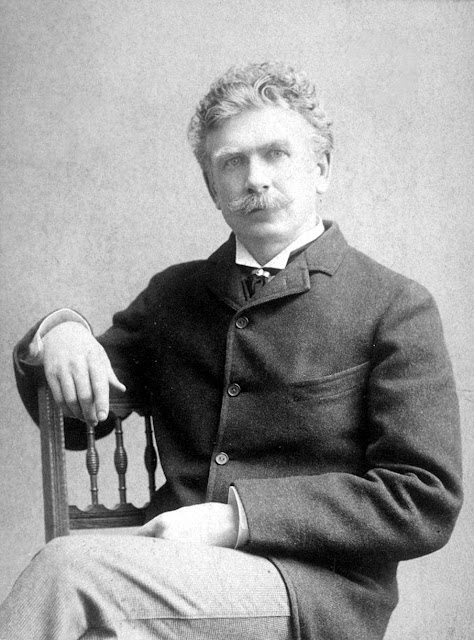 Ambrose Bierce was born on June 24, 1842 in Meigs County, Ohio, the tenth of fourteen children of a poor, but literary minded couple.  The family relocated to Indiana where Bierce briefly attended high school before dropping out at age 15 to help support his family as a printer’s devil at a local newspaper.

When the Civil War erupted he joined the first rush of volunteers.  As a private in the 9th Indiana Infantry and soon saw action in the Western Virginia Campaign, the first major land action of the war.  He was singled out and mentioned in newspaper dispatches for bravery in the Battle of Rich Mountain in July 1861 for a daring rescue of a wounded comrade under heavy fire.

In February of 1862 Bierce was promoted from the ranks to First Lieutenant and assigned to the staff of General William Babcock Hazen as a Topographical Engineer.  His often dangerous job was to scout and map the terrain of campaigns and potential battlefields.  The accuracy of these maps was critical to making command decisions about the disposition of troops and artillery and executing maneuvers on the battlefield. 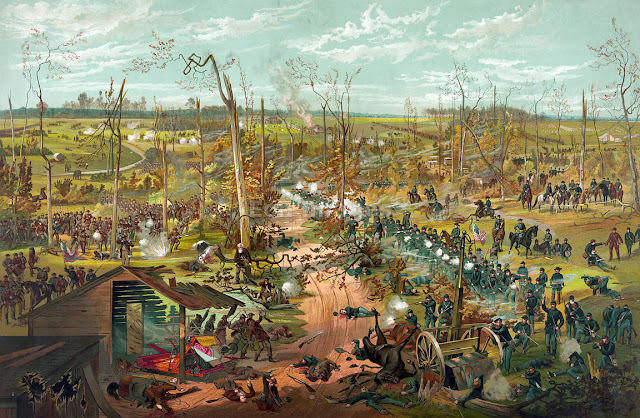 The Battle of Shiloh was one of the bloodiest of the Civil War and left a lasting scar on a young Lieutenant of the Topographical Engineers.

Bierce again saw action in the horrific Battle of Shiloh in April of 1862, a battle that had a lifelong effect on him and inspired many of his post war writings including a memoir, What I Saw of Shiloh and several of the short stories that would first make him famous including An Occurrence at Owl Creek Bridge, a classic horror tale.

Bierce continued to see action with the western Union armies until he received a severe head wound at the Battle of Kennesaw Mountain in June 1864.  Although he returned to active duty in September, he was discharged in January 1865 because of his wounds.

In 1866 his old commander General Hazen induced him to return to the Army to accompany him on an expedition to inspect military outposts in the West and survey supply routes and possible locations for new posts, a key mission as Red Cloud’s War raged in the Northern Plaines.  The expedition traversed the West from Omaha, Nebraska to San Francisco, California by wagon and horseback with many surveying side trips.  Bierce, although wracked with asthma and suffering from his war wounds, completed his duties.  He resigned from the Army with a rank of brevet major and settled in San Francisco.

He returned to newspaper work and quickly established a reputation as a writer contributing to The San Francisco News Letter where gained fame for grizzly crime reporting, The Argonaut, the Overland Monthly, The Californian and The Wasp.

He married and began a family.  From 1872 to 1875 he lived and worked in England where his first book, a collection of his journalism pieces, was published.

He returned to the City by The Bay, where he worked for years, with the exception as a brief fling as a gold mine manager in Deadwood.  By 1887 he was a leading columnist in William Randolph Hearst’s San Francisco Examiner.

He became a leader of a burgeoning West Coast literary circle that included local color writers like Bret Hart, and poets Ella Wheeler Wilcox and Edwin Markham.  His short stories had been attracting wide-spread admiration since 1871.  His poetry reflected bitterness at the cruelty and cupidity of humanity.  He became popularly identified as a cynic and misanthrope, although much of his bitterness came from the failure of high ideals that he had once treasured. 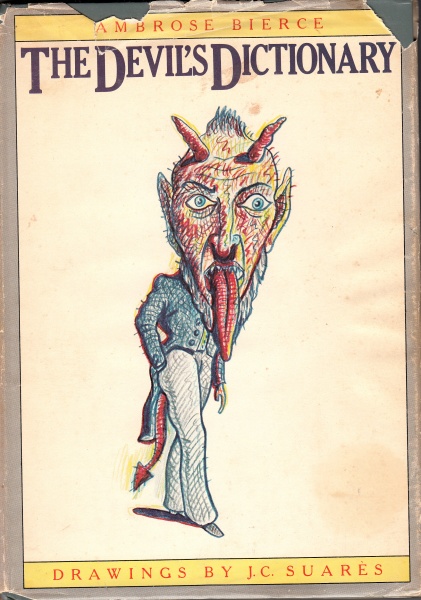 There have been scores of editions of The Devil's Dictionary and it has never gone out of print.


In 1911 Bierce published The Devil’s Dictionary, the work for which he is now best remembered.  The Dictionary was filled with pithy, deeply sardonic definitions like these:

Christian, n.: one who believes that the New Testament is a divinely inspired book admirably suited to the spiritual needs of his neighbor.

Cynic, n. A blackguard whose faulty vision sees things as they are not as they ought to be.

Education, n. That which discloses to the wise and disguises from the foolish their lack of understanding.

Egotist, n. A person of low taste, more interested in himself than in me.”

Faith, n. Belief without evidence in what is told by one who speaks without knowledge, of things without parallel.

Two years later, with two of his children and his long estranged wife dead and himself  in poor health, Bierce disappeared into revolutionary Mexico after a final tour his old Civil War battlefields. 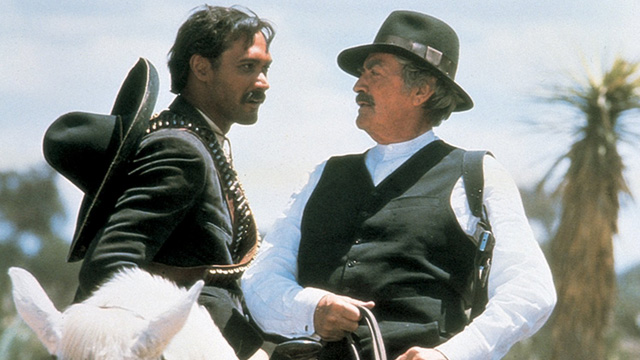 Jimmy Smitts as a Villista officer and Gregory Peck as Bitter (Bierce) in The Old Gringo in 1989.

He reportedly traveled with Pancho Villa’s army.  Some reports say he was executed by Villa, but there is no proof.  He simply disappeared.  His fate itself became the stuff of literary legend and has inspired books, plays, and the popular film The Old Gringo starring Gregory Peck in one of his last roles as the writer.

Posted by Patrick Murfin at 5:53 AM