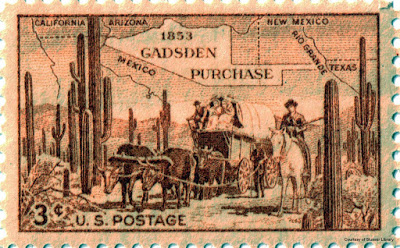 In 1953 the Post Office celebrated the centennial of the Gadsden Purchase with a commemorative stamp.

In 1853 a lot of Mexicans woke up to discover that they were living in another country in which at best they were third class citizens and at worst considered vermin to be erased at the earliest opportunity.  A shady international real estate scheme pushed the Mexican/US boarder south, deep into the deserts of the future states of New Mexico and Arizona.  Without that land grab desperate Central American refugees would have had a hell of a lot longer walk to seek asylum and Trump’s Wall even more useless.

The boundaries of the continental United States were expanded for a final time when President Franklin Pierce signed the agreement for the Gadsden Purchase on June 29, 1853.  The purchase added 29,670 square miles south of the Gila River and west of the Río Grande to what was then New Mexico Territory.  The land included the Mesilla Valley which had been identified as the logical route for a southern transcontinental railway which the slave holding South hoped would tie them to California and bring that state, or a divided southern half of it, into the slave holding orbit.

Negotiations with the Mexican government, first initiated by the James Buchanan administration, were also meant to clear up boundary issues left unresolved the Treaty of Guadalupe-Hidalgo that ended the Mexican War and resulted in the acquisition of much of the Southwest and California by the United States.  The Mexican government was also interested in large compensation from America for failing to live up to the terms of the treaty by stopping wide-spread raiding into Mexico by Apache and Comanche tribes from U.S. Territory. 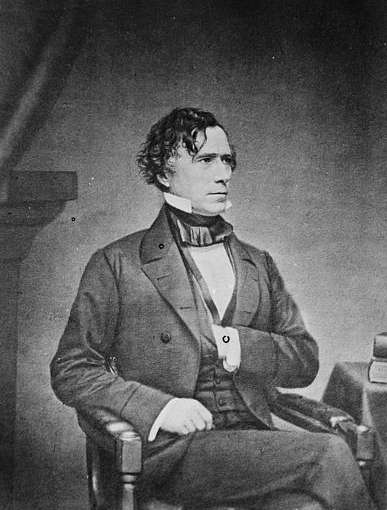 Democrat Pierce, though a New Englander, was Doughface, was a “Northern man with Southern sympathies”. At the suggestion of his Secretary of War, Jefferson Davis, Pierce selected South Carolina born southern firebrand James Gadsden as Ambassador to Mexico with instructions to reach an agreement on border issues and to secure permission to build a railroad or canal across the Isthmus of Tehuantepec.

But Gadsden had no interest in furthering the scheme for an Isthmus railroad.  Instead he was a promoter of, and had a financial interest in, a potential railroad through the Mesilla Valley.

Gadsden was a former Army officer who had served with Andrew Jackson in the War of 1812 and against Indians in Florida.  In 1832 he resigned from the Army to accept appoint by President Jackson as one of the Commissioners in charge of Seminole removal from Florida and Georgia, a job he perused with ruthless enthusiasm.  He broke with his old commander and political sponsor, however, during the South Carolina Nullification crisis in 1831 and was a supporter of John C. Calhoun. 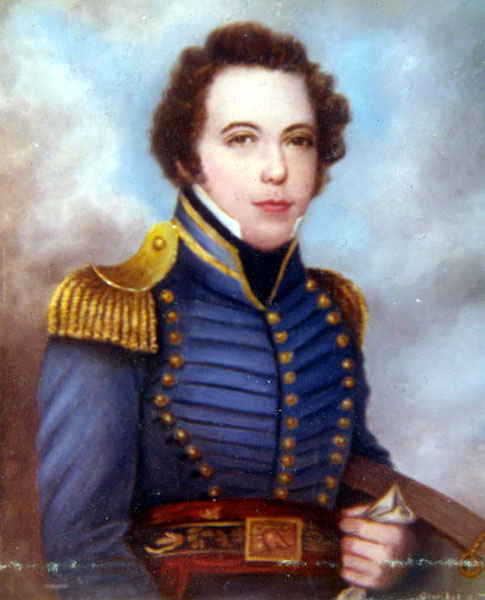 Gadsden as a young Army Lieutenant, the only known image of him.

As a member of the South Carolina legislature in 1850, he advocated secession from the Union because of the admission of California as a free state.  At the time he was also President of the South Carolina Canal and Railway Co. and was engaged in plans to connect all southern railroads into a unified network.  In 1847 he had helped convene a convention of southern railroads in Memphis to that end. The convention endorsed establishing the southern transcontinental route although it failed to agree on how to finance it.

After California was admitted, Gadsden entered a scheme with Southern sympathizers in the state to divide it in two, with the southern half embracing slavery, including the use of slave labor to build the southern railroad.  He proposed importing 1200 settlers from South Carolina and Florida along with “not less than Two Thousand of their African Domestics” to populate a special rural district that would ape the Southern plantation economy by raising cotton, rice, and sugar cane.  Although this proposal died in the state legislature, it was well known in Washington, as was Gadsden’s financial interests in the southern railroad project.

None-the-less, Gadsden was tapped as negotiator.  Secretary of State William L. Marcy gave him clear instructions to secure the Mesilla Valley for the purposes of building a railroad through it, convince Mexico that the US had done its best regarding the Indian raids, and elicit Mexican cooperation in efforts by US citizens to build across the Tenhuantepec isthmus. 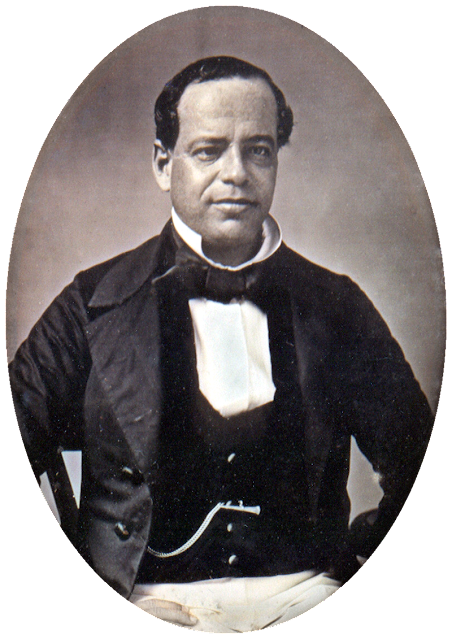 Santa Anna in 1853, President of Mexico for the 7th and final time.

Gadsden arrived in Mexico City to find General Antonio Lopez de Santa Anna had been returned to the Mexican Presidency for the seventh and final time.  As an ardent nationalist Santa Anna was opposed to territorial concessions to the U.S. and determined to get reparations for continued Indian raids.  Moreover, he was deeply offended by Gadsden’s brusque, insulting demeanor.  Gadsden blithely told the President that “the spirit of the times” would inevitably lead to the secession of Mexico’s northern states and demanded that he sell most or all of the states of Sonora, Chihuahua, and Baja California.

Mexico, as usual, was in political and financial turmoil at the time.  Gadsden soon realized that Santa Anna desperately needed cash to revive and rearm the Mexican Army in defense of expected aggression by the American government and from Filibusterers like William Walker who had recently tried to capture Baja California with 50 men.

After informing Marcy of the Santa Anna’s desperation, Gadsen received new instructions to negotiate for the sale of six large parcels of land and that the price for them would include reparations for the Indian raids and absolution from any U.S. responsibility for future raids.  Prices ranged from $50 million for Baja California and large swaths of the northern Mexico states to $15 million for the main proposed railroad corridor along the Mesilla Valley.

He was also instructed to keep pressing for the Tenhuantepec isthmus route.  Gadsden soon abandoned all pretext of seeking the isthmus route, which would have been in competition with the proposed southern transcontinental route.  He also quit pressing for wider land concessions in order to quickly secure his railroad route.

In the end Santa Anna was glad to sell mostly wasteland which would also serve as a buffer between Mexico and the hostile tribes to the U.S. for $15 million.

The U.S. Cabinet began reviewing the treaty in January of 1854 and although Jefferson Davis was disappointed that further territorial concessions were not obtained and others were upset by the loss of the Isthmus route, the treaty was sent to an uncertain fate in Congress in February.

There it immediately became ensnared in sectional conflict over the Kansas-Nebraska Act and the extension of slavery to new western territories.  Many Northern senators were particularly concerned about the possibility of the southern railroad, which would have both conflicted with their own interests in a northern route and possibly become a “conduit of chattel slavery into the West.”  On April 17 the Senate voted 27 to 18 in favor of the treaty, falling three votes short of the necessary two-thirds required for approval. 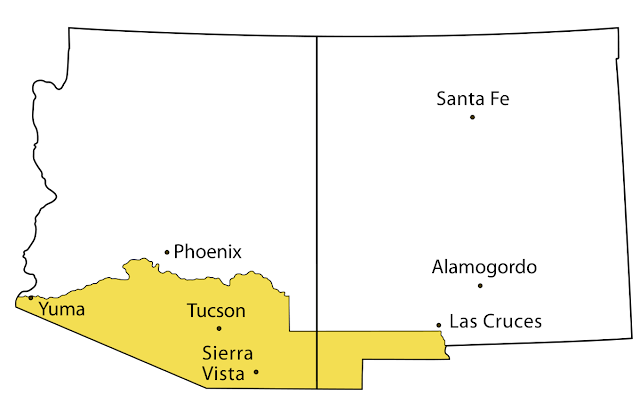 The final version of the Gadsden Purchase overlaid on a map of modern Arizona and New Mexico.

Davis urged that the President save the treaty by accepting several modifications including re-opening the possibility of the Isthmus route, giving the U.S. the right to use “when it may feel sanctioned and warranted by the public or international law” in protection of construction of a canal or railroad across the Isthmus, and a reduction of territorial concession by 9,000 square miles with a corresponding drop in purchase price of $10 million.  The changes were enough to secure additional northern votes and the treaty finally passed by a vote of 32 to 12.

Gadsden presented the amended treaty to Santa Anna who reluctantly agreed.  No progress was ever made on securing concessions for the Isthmus of Tehuantepec project.  In the end, the treaty only really secured a real estate deal covering some very inhospitable desert land.

Santa Anna’s popularity in Mexico declined because of agreeing to what was seen as yet another humiliating concession to the U.S. and because he squandered the infusion of hard cash from the purchase.  He was removed from power for the final time by the Ayutla Rebellion of 1854. 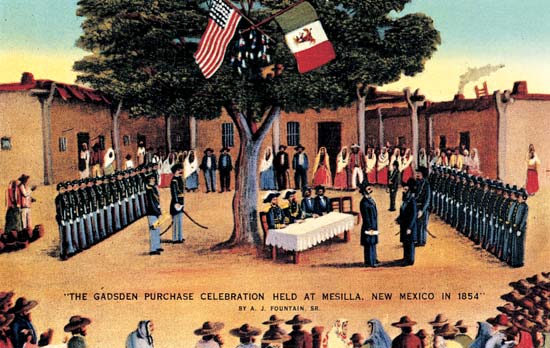 The official hand-over of the Gadsden Purchase in a ceremony a Mesilla, New Mexico, right where Gadsden and his cronies wanted to run their transcontinental railroad to California.

In the U.S. the political fallout over the ratification debate and hardening sectional hostilities meant that the railroad through the Mesilla Valley would never be built.  During the Civil War most of the purchase ended up in the newly created Territory of Arizona.  When the Southern Pacific Railroad finally built a southern route in the 1880’s it did not follow the Mesilla Valley, but went further north along a line only partially within the Gadsden Purchase.

Today the land includes Tucson, Bisbee, and Yuma Arizona but is otherwise sparsely populated and mostly owned by the Federal Government as Indian reservations, conservation land, and military reservations.  The in the last census the total population in the Purchase area was about 1,373,000 with three-quarters of the people residing in the Tucson metropolitan aria.

Many of the brown skinned residents of the area descend from folks who were there when it was Mexican territory.  Yet in modern Arizona they were often swept up in the anti-immigrant hysteria that was codified in that state’s draconian laws several years ago before much of their content was declared Unconstitutional by the Supreme Court.  Today when they are stopped by Border Patrol Agents and required to show identification, they complained loudly—and rightly—that “We didn’t cross the border, the border crossed us.”  Several U.S. Citizens have been swooped up anyway and spent days, weeks, even months in custody.