It’s Bloomsday—James Joyce and Dublin of the Imagination

Today is Bloomsday, a literary festival celebrated around the world in honor of Irish novelist James Joyce and his masterwork Ulysses.  It celebrates June 16, 1904, and the life and thoughts of Leopold Bloom, a Dublin Jew, his wife Molly and a host of other characters both fictional and real from 8 am that morning to the wee hours of the next day.

He set his novel on that day because it was the occasion of the first date between Joyce and his future mistress and wife, Nora Barnacle.

Joyce was born in Dublin in 1882, the eldest of ten children.  He was educated at Jesuit schools before enrolling at University College on Stephen’s Green where he studied modern languages at a time when Irish nationalism was spurring a renaissance of national culture and literature.

Upon graduation he went to Paris as a medical student but spent most of his time drinking in cafés and writing.  He was called home for the terminal illness of his mother in 1904 during which time he met Nora. 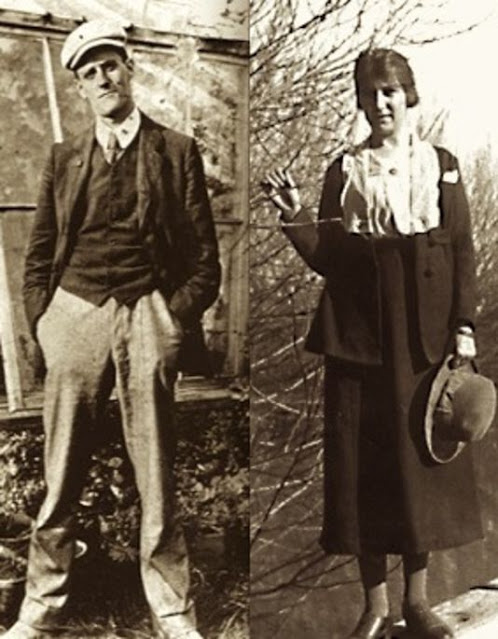 Young Jim Joyce and Nora Barnacle in 1904--the would-be writer and his red haired future mistress and wife.

That August the first of his short stories was published in the Irish Homestead magazine.  In October he left Ireland with Nora in tow for a job as an English teacher with a Berlitz school in Pola, Croatia.  He would only return to Ireland for four short visits after that, and the last of those was in 1912.  The couple lived as expatriates.

For ten years they lived in the city of Trieste where they immersed themselves in the local culture, spoke the local Italian dialect at home, and added two children, Georgio and Lucia, to the family.  Joyce contributed articles in Italian to the local press and lectured on literature.

Joyce’s separation from Ireland crystallized his memories of it and fixed them perfectly in a set time in a way that might not have been possible had he been living there amid the inevitable changes.

In 1914 Joyce had a breakthrough year as a writer.  American poet Ezra Pound assisted getting his first novel, the semi-autobiographical A Portrait of the Artist as a Young Man, published as a serial in Harriet Weaver’s London magazine, Egoist and his collection of short stories, begun in 1904, was published as The Dubliners.  These two works, plus a short play, The Exiles, introduced him as an important writer.

World War I erupted the same year and disrupted Joyce’s life. Italian speaking Trieste was a southern outpost of the Austo-Hungarian Empire.  Suddenly Joyce and his family were “enemy aliens” in hostile territory apt to be arrested.  They escaped to Zurich, Switzerland where they waited out the war and lived in squalor and poverty, supported by handouts from friends and literary admirers.

Joyce was working on the manuscript for Ulysses in which tied the events of Homer’s Odysseus to Bloom’s story and he incorporated people he knew from Trieste and Zurich into characters in his story.  Nora, particularly her distinct speech pattern and red hair, was the model for Molly Bloom. 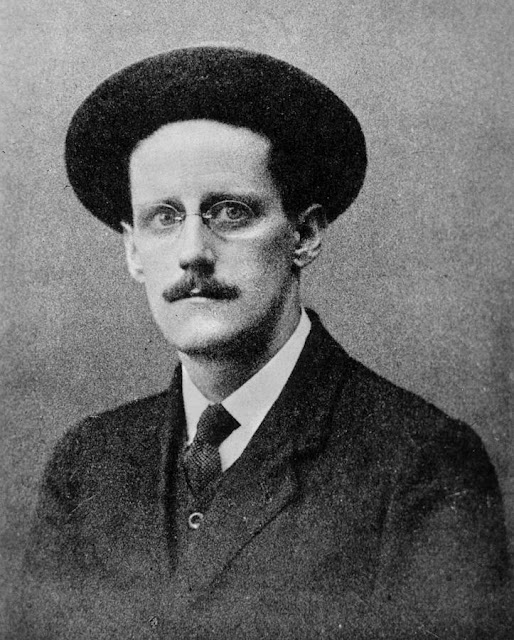 Joyce as an expatriate language teacher and writer.

After the war Pound induced the family to move to Paris, where they stayed for twenty years.  Joyce became part of the international community of expatriate writers and intellectuals that included his some-time drinking companion, Ernest Hemmingway.

In 1921 the serial publication of Ulysses in the American magazine The Little Review was stopped when the government charged the publisher with circulating pornography through the mails.  An English edition was scuttled before it could be issued when Harriet Weaver could not even find a printer willing to typeset the now notorious book.  In 1922 the American expatriate owner of the Shakespeare & Co. bookshop in Paris, Sylvia Beach finally published the novel, which was hailed as a masterpiece and denounced as lewd, unintelligible trash.  In 1932 an edition of the book was published by Joyce’s friend and associate Paul Léon, a Russian Jewish émigré living in Paris, under the imprint of Odyssey Press. 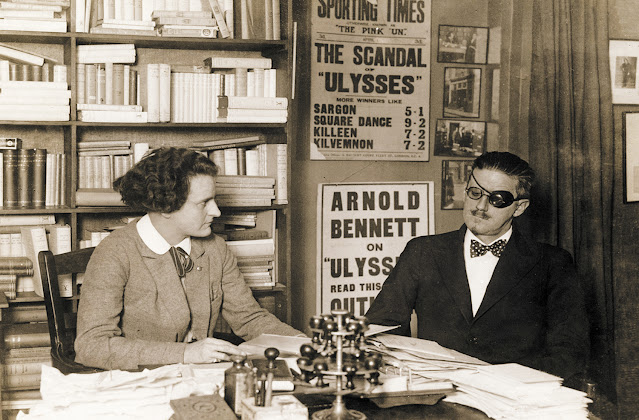 Joyce with the publisher of Ulysses, Sylvia Beach the American owner of Shakespeare & Company bookstore in Paris.

Despite a pirated 1929 edition, Ulysses remained banned in America until Benet Cerf of Random House, a friend from Paris, arranged to have a French edition of the book seized by Customs authorities so he could challenge the earlier obscenity ruling.  In 1934 U.S. District Judge John M. Woolsey ruled that the novel was not pornography and thus not obscene. The decision was upheld on appeal the next year.   Random House published an authorized American edition the same year.

The case was the death knell of using postal regulations to censor literary works in the U.S.  Two years later British censorship restrictions fell and the Bodley Head edition was published.

Each of these and subsequent editions have major differences in texts resulting from the lack of a single, unified original manuscript by Joyce, various textual editorial theories of the publishers and editors, and attempts to correct perceived “mistakes” in earlier editions.

While all this publication drama swirled around him, Joyce worked on the manuscript of his most complex work, the enigmatic Finnegan’s Wake published in 1939.

War once again disrupted his life as the Nazis closed in on Paris in 1940.  Joyce and family fled to the South of France before being given refuge once again in Zurich.  The faithful Paul Léon dared to return to Paris to rescue Joyce’s personal effects and manuscripts, which he put in hiding. 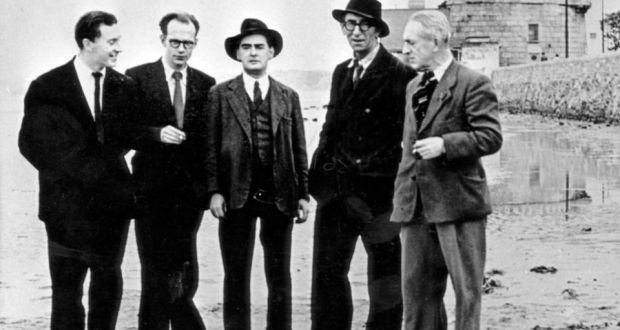 The first observation of Bloomsday was organized by the Irish writers Patrick Kavanagh and Flann O’Brien in 1954 on the 50th anniversary of the original date.  A tour of the various sites in the book was never completed when the participants partook too deeply at pubs in route.  Joyce would have approved.  Since then, Bloomsday events, usually involving extended readings from the book, have been spread around the globe.  Want to participate?  You can start from the beginning:

STATELY, PLUMP BUCK MULLIGAN CAME FROM THE STAIRHEAD, bearing a bowl of lather on which a mirror and a razor lay crossed. A yellow dressing gown, ungirdled, was sustained gently-behind him by the mild morning air. He held the bowl aloft and intoned:

.
Halted, he peered down the dark winding stairs and called up coarsely:

—Come up, Kinch. Come up, you fearful jesuit.

Solemnly he came forward and mounted the round gunrest. He faced about and blessed gravely thrice the tower, the surrounding country and the awaking mountains. Then, catching sight of Stephen Dedalus, he bent towards him and made rapid crosses in the air, gurgling in his throat and shaking his head. Stephen Dedalus, displeased and sleepy, leaned his arms on the top of the staircase and looked coldly at the shaking gurgling face that blessed him, equine in its length, and at the light untonsured hair, grained and hued like pale oak.

Buck Mulligan peeped an instant under the mirror and then covered the bowl smartly. 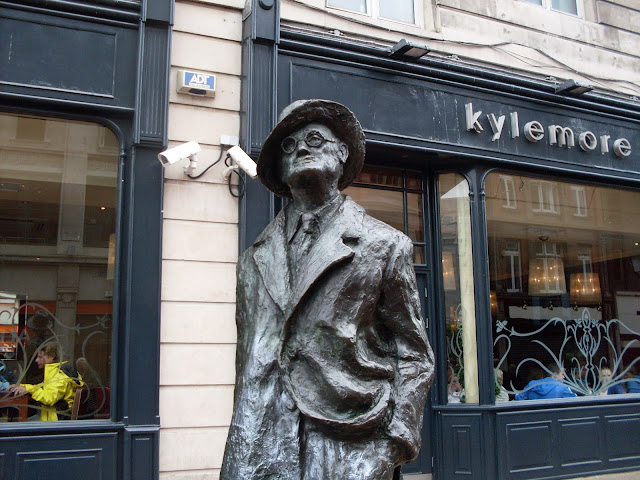