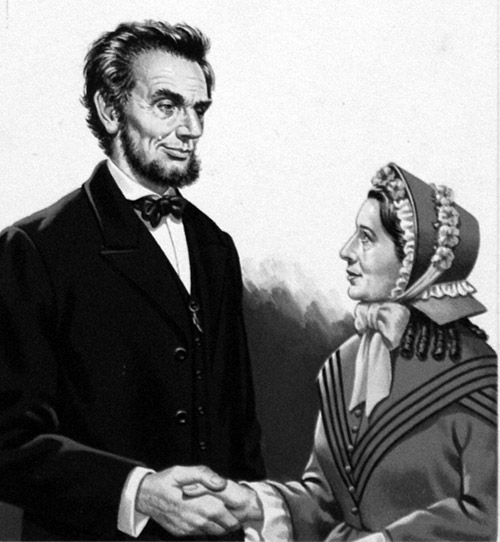 When Abraham Lincoln was introduced to Harriet Beecher Stowe in 1861, he famously remarked, “So this is the little lady who made this big war.” Of course he was referring to her novel Uncle Tom’s Cabin; or, Life Among the Lowly which had its first installment published on June 5, 1852 in the abolitionist newspaper National Era.  It ran for ten months and then on March 20, 1853 was published as a book.

The novel was, to say the least, a sensation.  It was the leading best seller of the whole 19th Century, lagging in sales only to the Bible.  Within the first year 300,000 copies were sold in editions that ranged from a 13½ cent paper covered “Edition for the Millions” to a lavishly illustrated two volume leather bound edition available for a whopping $5.  It sold nearly as well in Britain where 200,000 copies sold in the same period. 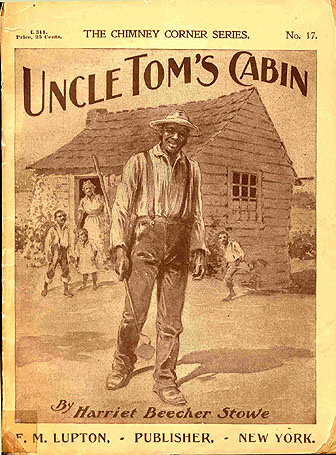 Stowe was a devout Christian from an ardently abolitionist family that included her brother the Rev. Henry Ward Beecher, the most famous preacher of his day.  She composed the book out of outrage over the 1850 Fugitive Slave Act, which required Northerners to cooperate in the capture and return of escaped slaves.  She published the first chapters in the National Journal the following year.

Although she had never visited the South, she based her characters and situations on popular anti-slavery publications already in circulation, including the autobiography of Josiah Hensen, an escaped slave living in Canada who was reputedly the model for the book’s title character.

The sentimental story was fraught with melodrama as it followed the noble slave Uncle Tom and his relations through the brutality of bondage.  Scenes like the escape of the young house slave Eliza clutching her infant over the ice floes on the Ohio River, the mystical vision of the saintly dying white child Little Eva, and Tom’s brutal murder seared the imaginations of readers.

When the book came out abolitionists were a despised minority even in the North.  Within a few years it so stoked resentment of the Southern slave culture in the North that it helped get slavery opponent Lincoln elected president. 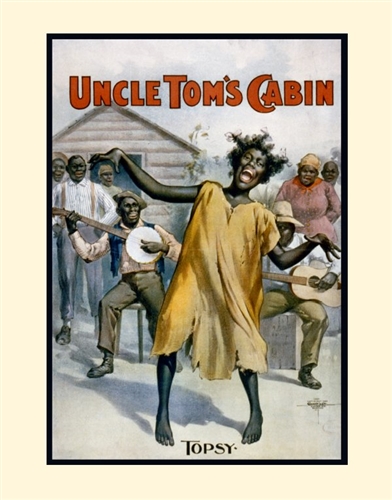 Uncle Tom's Cabin was accused to manufacturing or perpetuating stereotypes like happy slaves erupting in dance at the drop of any hat and "pickaninnies."  But how much of that came from the novel, and how much from the decades of Tom Show that followed?


Despite its pivotal role in changing public opinion in the 19th Century, the book, and particularly Uncle Tom became controversial in the 20th.  It was criticized for the stereotypes of its slave characters including the shuffling, subservient male, the happy mammy to the white family, mulatto and light skinned slave women as sexual objects, and children as “pickaninnies.”

In particular Uncle Tom offended militants emerging from the Civil Rights Movement who used his name as an epithet against Blacks that they considered subservient or insufficiently assertive of their rights.  Many of these stereotypes and images came not so much from Stowe’s original book, which was seldom read in the modern era, but from the stage adaptations the flooded American theaters for decades.

The first serious attempt at faithful stage adaptation was a one-hour play by C.W. Taylor at Purdy’s National Theater in New York City.  It ran for only ten performances or in August–September 1852 but set an ominous pattern sharing a bill with a blackface comic set piece featuring T.D. Rice who rose to fame in the 1830s for the character Jim Crow.  That name would be applied to the new wave of segregation, oppression, and political disempowerment of Blacks in the South after the end of Reconstruction.  Rice himself would rise to even greater fame as the most celebrated actor to play the title role of Tom in another version of the story, a play by play H.E. Stevens that opened in January 1854 at the Bowery Theatre. A Spirit of the Times’ reviewer described him as “decidedly the best personator of negro character who has appeared in any drama.” 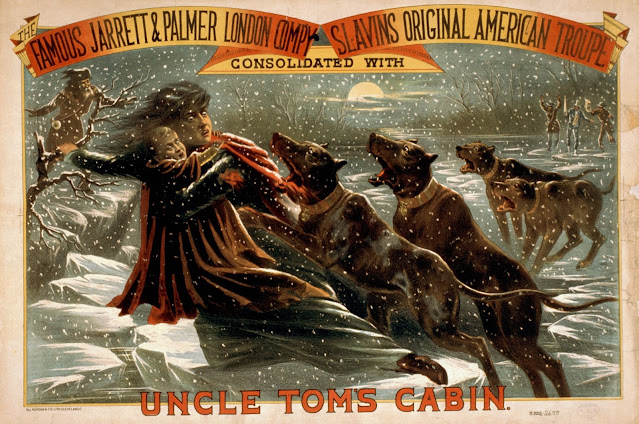 The escape of mulatto house slave Eliza over the ice floes on the Ohio River pursued by dogs was the dramatic high point of Tom Shows and often promoted in lurid posters like this from 1881.


Several versions toured, many applying stereotypes borrowed from the minstrel show to the characters in the novel.  Stowe had no control over any of these “Tom Shows,” as they became known but literally millions of Americans saw them.

Tom Shows persisted well into the 20th Century mostly touring small towns until the popularities of movies drove most out of business as they did other popular forms of stage entertainments including Minstrel Shows and Vaudeville.  The last troupes were reported struggling in the Ohio hinterlands into the Depression.

Two versions of Tom Shows were filmed in  1903, both using white actors in blackface, including one by Edwin S. Porter, Thomas Edison’s main director and the man responsible for the first film with a plot, The Great Train Robbery earlier the same year.  Literally dozens of silent versions followed. 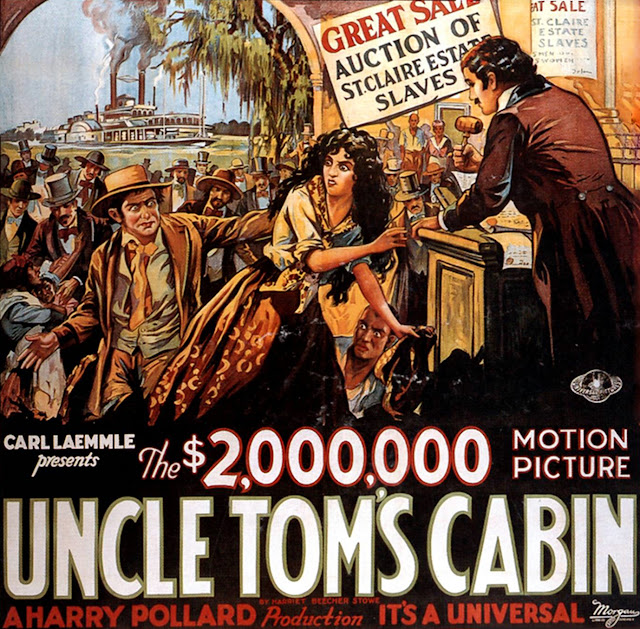 The epic 1927 silent version actually featured Black actors and attempted to be more explicitly anti-slavery than the previous Tom show mummery, but fears of Southern boycotts and white riots caused Universal to cut most of that material from the ultimate release.


The most ambitious—also the only one to break the mold of the submissive stereotype Uncle Tom had become was a two-hour movie directed by Harry A. Pollard who had played Tom in a 1913 release.   The elaborate 1927 film spent an unheard-of year in production and cost $1.8 million, the third most expensive film of the silent era.  The script departed from both the usual Tom Shows and Stowe’s novel.  After Tom dies, he returns as a vengeful spirit and confronts Simon Legree before leading the slave owner to his death. Black critics loved the film, but the studio—fearful of a backlash from Southern and white audiences cut out controversial scenes, including the opening scene at a slave auction where a mother is torn away from her baby.  The film was also notable for featuring African American actor James B. Lowe as Tom.

In the sound era studios refused to film new versions because of the controversial content.  But references and burlesques of the story ended up in many films and cartoons, virtually unanimously embarrassing. 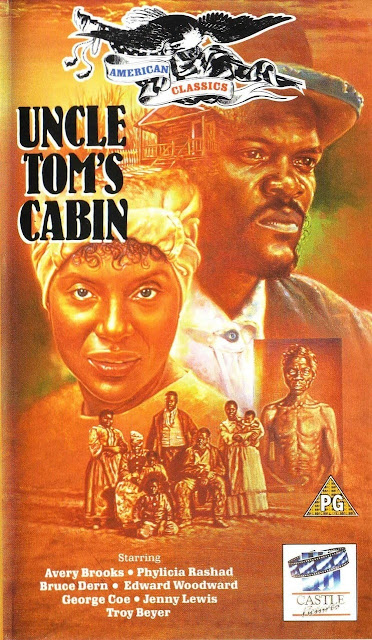 The home video package for the 1987 TV movie which re-cast the previous film and stage versions in the mold of super-successful Roots.


In 1987 after the success of Roots, a new TV movie version was mounted featuring leading Black actors including Avery Brooks as Tom, Phylicia Rashad as Eliza, Paula Kelly, and Samuel L. Jackson in addition to white stars Bruce Dern and Edward Woodward.  This version was advertised as a frank exposé of the horrors of slavery and Tom was not only noble and long suffering, but a powerful communal figure.  Despite its good intentions, the character of Uncle Tom was then in such disrepute in the Black community that the film was a ratings failure.

From the early 20th Century on the depiction of Blacks in films were often directly drawn from the stock figures of the touring Tom Shows, often plunking Black characters into any plot or situation mostly for comic relief.

Today, some Black scholars like Henry Louis Gates, Jr. have expressed a renewed respect for the place of the book in the history of American race relations.

Posted by Patrick Murfin at 6:42 AM