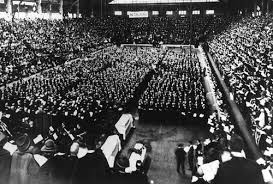 The inaugural worship service of he new United Church of Canada held on June 10, 1925 in the Mutual Street Arena in Toronto attracted thousands and lasted for hours.

On June 10, 1925 member congregations in the Toronto area held their first worship service as part of the new United Church of Canada.  The denomination was an amalgam of Canadian Congregationalist, Methodist, most Presbyterian, and Prairie Provinces churches which had already federated locally and were loosely formed as the Association of Local Union Churches.  The United Church instantly became, behind the Roman Catholics, the second largest Christian church body in Canada and despite recent declines in membership mirroring similar trends for mainline Protestants in the United States remains so to this day.

Although the name of the new denomination seems to imply official status as a State Church, that is not the case.  Anglican Church of Canada, of which Queen Elizabeth is titular head as Defender of the Faith, and is the third largest denomination in the country has special status but is also not a State Church.  In Francophone Quebec the Roman Catholic Church likewise has special status.


The Canadians accomplished what American Protestants had often claimed they yearned for but never did.  Instead, American Protestantism remained mired in sectarianism and the tendency of church bodies to schizmatize over doctrinal, ritual, political, and sectional differences.  The Congregationalists tried valiantly to do the same, but were rebuffed by most of the largest potential allies, notably the Presbyterians with whom they shared nearly identical theological roots.  Of course they also spurned potential allies like the Universalists and their cousin Unitarians over doctrinal differences.  In the end the Congregationalists could join only with a faction of the [Dutch] Reform Church and a few small sects to form the United Church of Christ in the 1950’s.  Hope that the creation of the UCC would spur others to join proved fruitless.

The impetus for the amalgamation actually came from the Provinces outside the Protestant motherland of Ontario.  Many small towns had churches from all three of the founding denominations but had trouble finding and keeping highly educated clergy willing to work in the “wilds” for little pay.  They also struggled to maintain separate buildings.  It became common for a minister of one denomination to provide pastoral care for the others when they had no settled ministry.  This led to preaching from their pulpits on occasion and eventually to the creation of local Union churches serving adherents of all groups.  By the turn of the 20th Century the situation was becoming so common that the Association of Local Union Churches was formed to provide some moderate level of support and coordination. 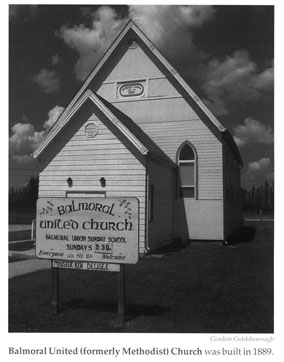 This former Methodist church built in 1899 was typical of the small and struggling churches in the Prairie Provinces.  It shared its space with a Presbyterian congregation for some time before forming a Union Church and becoming part of the movement that led to the creation of the United Church of Canada.

This encouraged talks among the parent organizations.  Talks dragged on for years before an agreement was made between the governing bodies of each church.  Then it had to be ratified by votes of member congregations.  The Methodists, largest of the groups, and Congregationalists voted overwhelmingly to participate.  But there was a split among Presbyterians.  302 out of 4,509 Presbyterian congregations, mostly concentrated it the Scots heartland of southern Ontario, voted against affiliation.  Under a freedom of association clause, they were allowed to go their own way and set up their own new Presbyterian Church in Canada.

The next step was untangling the various property issues resulting from different polities.  That required an Act of Parliament which was passed in June, 1924 to go into effect a year later.

On Sunday, June 10, 1924 thousands jammed Mutual Street Arena in Toronto for a gala opening worship.  It must have been quite an event.  Worshipers were handed a 38-page order of service containing the full text of the liturgy, prayers, hymns, and music.  The program aimed to be inclusive and respectful of all traditions so hymns and prayers from all were included.  Clergy from all joined in leading prayers, offering greetings, and in the sermon. 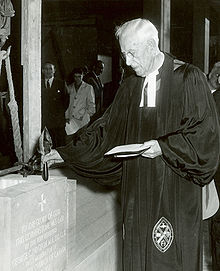 The first General Council, the governing body of the new denomination, selected the Rev. George C. Pidgeon, last Moderator of the Presbyterian Church as he first Moderator of the United Church.  The leader of the Methodists, who had been expected to take the position, withdrew in hope that Pidgeon could convince the recalcitrant Presbyterians to join the fold.

Structurally, the Methodists gave up their Episcopal structure.  What became of unemployed Bishops is not clear.  The church was organized around localized Presbyteries, but local congregations had much more autonomy than under the classic Presbyterian model, a nod to the Congregationalists.  85 or so Presbyteries were organized in 18 Conferences which elected members of the General Council which meets every three years.

Theologically the United Church has always been liberal and has grown more so.  It offers open communion in memory of the Last Supper.   There is infant baptism, but adults have to be confirmed as members after making a public confession of faith to the congregation.  Originally that confession was expected to reflect basic Christian tenets, but most congregations now admit wide personal statements and admit non-traditional Christians, theists, agnostics, and in some cases even atheists.  Adults entering the church are baptized.

Not all attending United Church worship are members.  In fact the United Church now claims about 300,000 members but over a million “adherents.”  Many of these are regular church goers and participate fully in congregational life but choose for one reason or another not to formally join—most because of the baptism and profession of faith requirements.  Adherents can’t vote for officers or on ministerial calls, but on all other congregational issues are typically included by a motion at the beginning of annual congregational meetings to allow voting by, “all who are present.”

The United Church and the Anglican Church have been in discussions for decades and in 1943 signed a statement permitting mutual ministry, but the Episcopal structure of Anglicanism and the status of their ministers as priests has prevented formal merger. 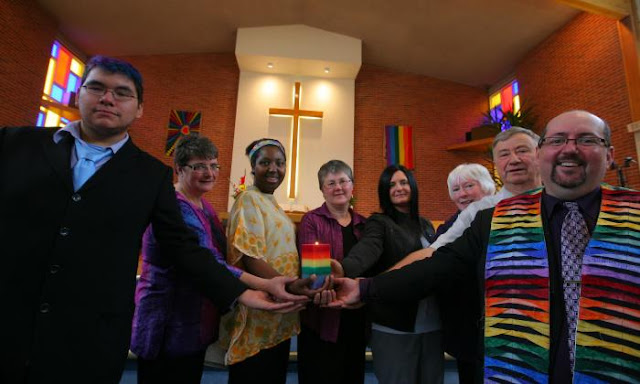 The United Church of Canada was one of the first Protestant bodies in the world to affirm complete equality in the pews and pulpit for "all persons regardless of sexual orientation" in 1988,  Although some congregations were lost and individual members withdrew, the Church remains a bastion of equality.

In 1988 the General Council voted to allow “all persons, regardless of sexual orientation, who profess their faith in Jesus Christ are welcome to be or become members of The United Church of Canada” and that “all members…are eligible to be considered for ordered ministry.”  This created a minor schism.  Membership fell nearly 75,000 over the next four years and a number of congregations left.  Despite this, the United Church has continued its commitment, which is now widely supported in the pews.

The church has also had to deal with the heritage of operating government sanctioned native residential schools that were designed to assimilate native children into Canadian culture.   These had been inherited from the founding denominations.  By the late 40’s the United Church began to close the schools as assimilation was recognized as destructive to First Nations peoples and culture.  But the hangover has lingered for decades, spurred in recent years of accounts of sexual exploitation at some of the schools.  The United Church has dealt with it repeatedly.  It elected a Cree, the Reverend Stan McKay as Moderator in 1992 and two years later it set up a “Healing Fund” and later issued a formal apology to the First Nations.  In 2006 the church signed the Indian Residential Schools Settlement Agreement, a part of a formal pact between the Government and the First Nations which had the support of the Church. 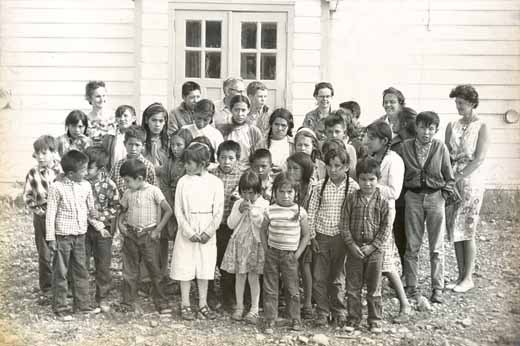 First Nations residential schools managed by the United Church like this one on Chiniki Reseerve in Morely, Alberta in the 1930's, remain a troubling legacy for the church.

The United Church now struggles now with declining membership, like mainline U.S. Protestants, but still stands at the forefront of social justice in Canada.

Here’s wishing them a happy birthday!

Posted by Patrick Murfin at 6:02 AM