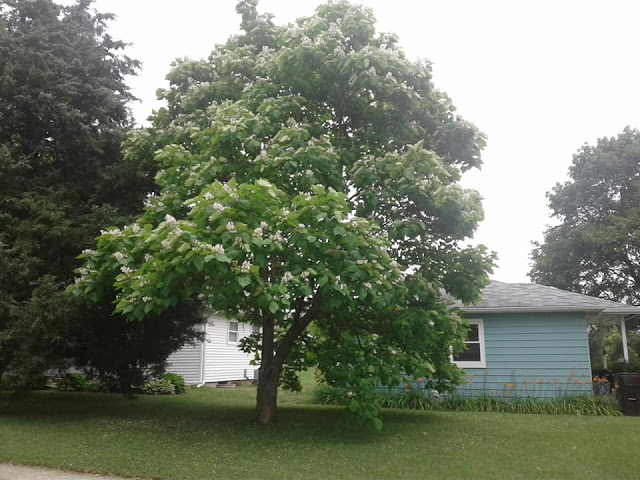 The Murfin Estate catalpa in bloom.

Note:  Revisiting a post that first ran eight years ago. The tree got bigger, much bigger. Its branches have spread wide across our side yard offering deep, cool shade.  The boughs stretch almost to the sidewalk alongside the house and the crown now towers over our roof.  Meanwhile other investments in the future have been made in the yard.  A volunteer maple seedling that sprang up in an inconvenient spot was transplanted to the boulevard along Ridge Avenue eight years ago by my grandson.  Nick’s tree is now thriving and more than 12 feet tall. Seven years ago, Kathy planted a foot high spruce out by the garage to replace the towering 40 footer that blew over in the big storm a few years ago. It grows more than a foot a year, its bright green new growth shoots still growing practically by the minute.   Three years ago, Kathy and I collaborated in putting in young lilac bushes flanking the sidewalk from Ridge Ave. to the house.  The bushes grow more slowly than any of the trees, but after some decades should form a glorious arch gate.  We will not last that long, but with luck our living legacies will grace the lives of whoever comes after. 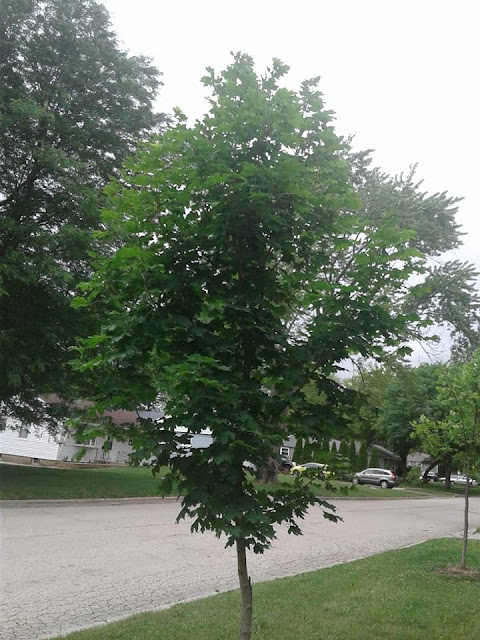 My wife Kathy and I enjoyed watching birds at a feeder and bath outside the kitchen window of our extremely humble abode in Crystal Lake, Illinois.

The great American elms that once shaded that side yard succumbed to disease and were removed more than twenty years ago leaving the yard sun-parched on hot summer afternoons.  So we wanted to plant a tree near the feeder to help attract birds and eventually shade the house.

One Sunday maybe eighteen years ago I came home with a stick barely thicker than my thumb and maybe two feet tall.  It was allegedly a catalpa tree.  We planted that stick a few feet from the bird feeder.  And we waited.

After the first year when just two brave twigs emerged from the stick, you could actually see the damn thing grow day by day.

I like to bend a branch down and show visitors the two or three sets of new leaves nestling like Russian dolls inside the wreath of earlier growth at the tip of a green shoot which has grown several inches in the less than a month since buds first appeared after a late cool spring.  The tree could grow another foot or more in all directions this year before the season ends. 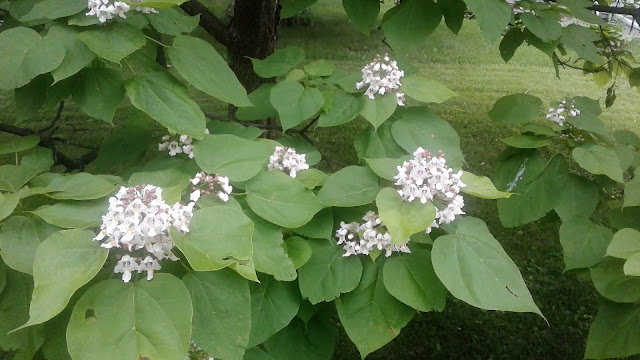 The tree now looms much higher than the peak of the roof of our ranch house, its numerous branches thick with heart shaped leaves the size of a dinner plates, its trunk the girth of a sturdy elephant’s leg.   It shades the kitchen window now in the fierce late afternoon sun but if so overgrew the bird feeders that we couldn’t keep the squirrels from launching themselves and gorging on $50 of seed and feed a week.  Sadly, we had to give up the feeding station.

Right now, the tree is bursting with clusters of white flowers.   In the fall it will develop long thin, bean-like pods which will cling to the bare tree over the winter finally dropping one by with the new growth next spring. 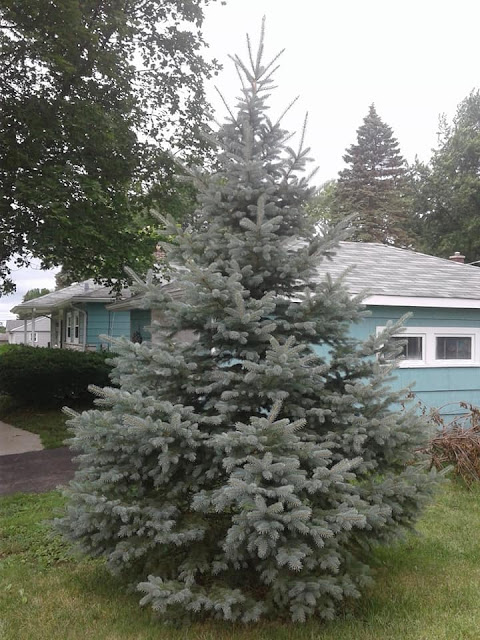 Kathy's tree--a spruce that quickly became way to tall to top with a star a Christmas.

A lot of folks think of catalpas as virtual weed trees because of the litter of dropped pods and because those enormous leaves do not get brightly colored in the fall, but slowly fade to an ugly olive green, wither and drop when decent trees are already bare.  A lot of folks think that those things make it a hassle and a nuisance.

Most people prefer the slow growing oak or a more vigorous maple.  They have their charms as well.  Planting an oak is a ticket into the future, a legacy.  Its eventual shade may not be as intense, but it will spread even further.  The sturdy trunk will withstand gales that would break or uproot the catalpa.  And, if left undisturbed, it will stand for centuries after the stump of the short-lived catalpa has rotted away.

We compromised between the two and added Nick’s little maple a few years ago which will mature into a formidable tree with bright yellow fall foliage in another decade. 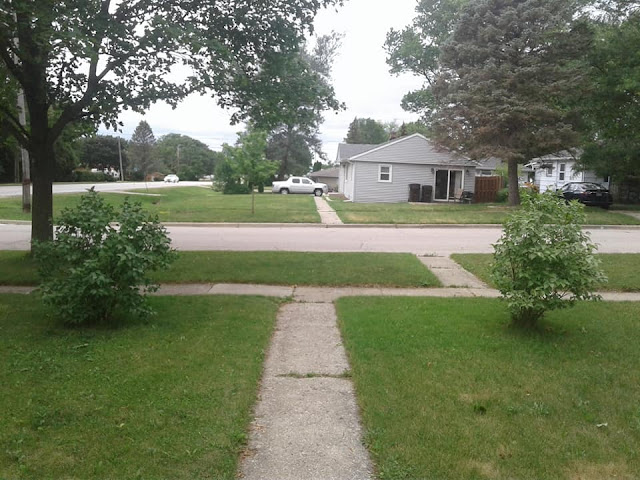 Long after Kathy and I are gone these young lilacs will form an archway over the side entrance to our property.

But I gain enormous satisfaction and a peculiar connection to nature watching that odd, weed of a tree.

But if I was thinking of my grandchildren and descendants, I should plant an acorn—and soon.

Posted by Patrick Murfin at 7:03 AM