Cooperstown and the Hall of Fame in the Middle of Nowhere 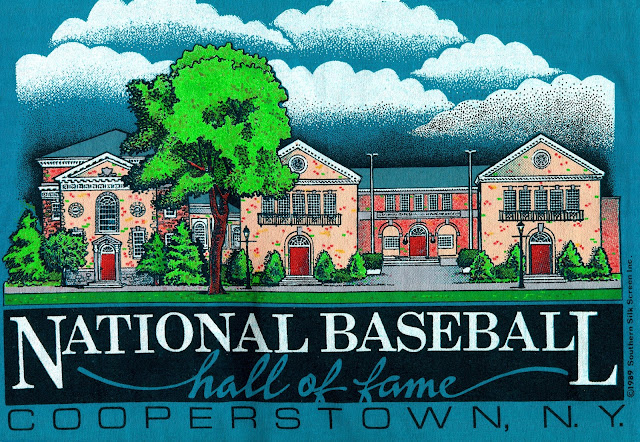 With local boosters licking their chops and a somewhat embarrassed Major League Baseball trying desperately to hold on to a ridiculous origin legend for the game saddled on them by the Mills Commission of 1908, the National Baseball Hall of Fame opened its doors in beautiful but un-bustling Cooperstown, New York on June 12, 1939.

The pedigree of the National Pastime was somewhat murky.  Everyone knew that it grew out of ball, bat, and tag games like Rounders and Townball which had been played on village greens since at least the turn of the 19th Century.  It was assumed to be related in some way to Cricket, the English national game which began taking hold in big American cities with the establishment of clubs of well-heeled sportsmen.  The connection to Cricket, and even to Rounders, another game of English origins, offended the sense of cocky jingoism that accompanied the coincidental rise of baseball and America as a muscular new world power in the later half of the century.

If the paths of evolution were befogged in the mists of time, the actual beginning of modern baseball was not, and plenty of people knew it.  The game as we know it came into being with the formation of the New York Knickerbockers founded on September 23, 1845.  It was one of several amateur sporting clubs made up mostly of young clerks playing bat and ball games to a variety of rules.  Alexander Cartwright and other members hammered out the Knickerbocker Rules, the first ever published.  The adoption of these rules by other clubs made games between squads of rival clubs possible without long negotiations over field or day rules. 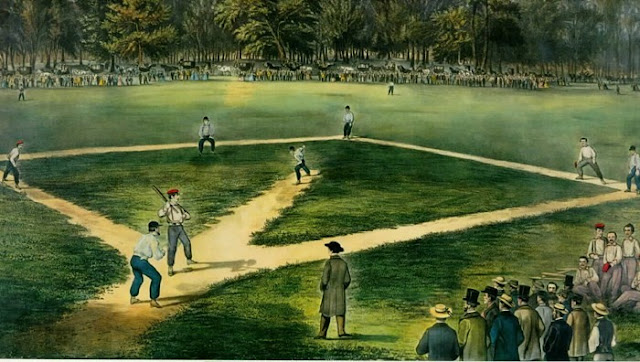 
The first inter-club game under these rules was played at Elysian Fields in Hoboken, New Jersey on June 19, 1846.  The Knickerbockers, by the way, lost to a club called the New York Nine.  But it was pretty clearly THE first game.

By the onset of the Civil War baseball was being played by clubs adopting the rules throughout the Northeast, Mid-West, and Upper South, although various other versions were still played locally in small towns and villages.

Many a lad packed his bat and ball with his kit when reporting for duty in the Union Army. Baseball games enlivened the deadly boredom of camp life between episodes of unimaginable horror in the big battles of the war.

Young Abraham Mills—no known relation to my mother’s family—of the 5th New York Volunteers—Duryée’s Zouaves—participated  in one notable game on Christmas Eve of 1862 against members of other regiments before 40,000 troops camped at Hilton Head Island, South Carolina.

Mills returned from the war as a second lieutenant, completed law school and set off on a distinguished career.  But he kept his hand in baseball as the player manager of the amateur Olympic Base Ball Club in Washington, D.C.  Eventually his legal and business connections and baseball experience secured him the Presidency of the National League.

In 1908 the former executive was put in charge of a special commission charged with investigating the origins of the game.  Privately it was understood that he was to discover a uniquely American pedigree un-besmirched by close association to British games. The Mills Commission did not work very hard or very diligently. 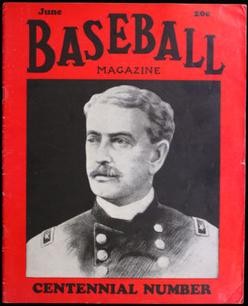 Union General Abner Doubleday of Cooperstown.  Despite the myth promoted by MLB he was decidedly not the inventor of baseball.


On the strength of a claim in one letter from a Colorado mining engineer, Abner Graves who claimed to have witnessed the first game played by Abner Doubleday, a future Union Army general, and students of the Otsego Academy and Green’s Select School in Cooperstown in 1839.  Despite numerous inconsistencies in the story, the Commission declared to the world that Doubleday was the founder and Cooperstown the cradle of baseball.

That was their official story, and they were sticking with it, even as mounting evidence year by year undercut the claim.

Cooperstown was a once thriving town off the beaten track in central New York State.  Near-by Lake Otsego is the source of the Susquehanna River.  Its other connection to fame was that it had been platted from a claim by the father of writer James Fenimore Cooper.  Once the center of a hops growing region, it had been hit hard first by Prohibition and then by the Depression which had cut deeply into a summer resort business.

Stephen Carlton Clark, whose family had made a fortune as co-founders of the Singer Sewing Machine Company and who had extensive holding in the town, including half-empty resort hotels began scheming to find some way to boost tourism.  He realized that the Doubleday connection was just what he needed.

He began promoting the idea of a Hall of Fame in his hometown in the mid-1930s.  Finally securing the blessing of Major League Baseball, he launched a well-publicized national campaign to elect the first members of the Hall while preparing his building in Cooperstown.

On January 29, 1936 the first “class” was elected  And quite a line-up it was—Ty Cobb, Babe Ruth, Honus Wagner, Christy Mathewson, and Walter Johnson.  With the standards for on field performance—not personal behavior—set so high, no subsequent class would be admitted without controversy and argument.

On the strength of those names, particularly Ruth, who had only recently retired and was still the Sultan of Swat to well-heeled Yankee fans for whom the tedious trip to Cooperstown was not quite so inconvenient, Clark finished his shrine and launched it to great hoopla.

It was an even greater goldmine than Clark ever imagined.

Currently there are 333 elected members of the Hall including former MLB players, Negro leagues (now recognizing those organizations as Big Leagues), managers, umpires, and pioneers, executives, and organizers. In addition sportswriters and broadcasters are also honored as are collectively the members of the All-American Girls Professional Baseball League.

This year there will be no players voted on by sportswriters inducted for the first time since 2013.  No player quite made the required cut despite the presence of at least three who would ordinarily be shoe-ins—pitchers Curt Schilling, Roger Clemens, and intimidating slugger Barry Bonds.  But all of them, like many top players of their era, have been tainted to one degree or another steroid use which a significant portion of the baseball writers currently feel should be disqualifying. 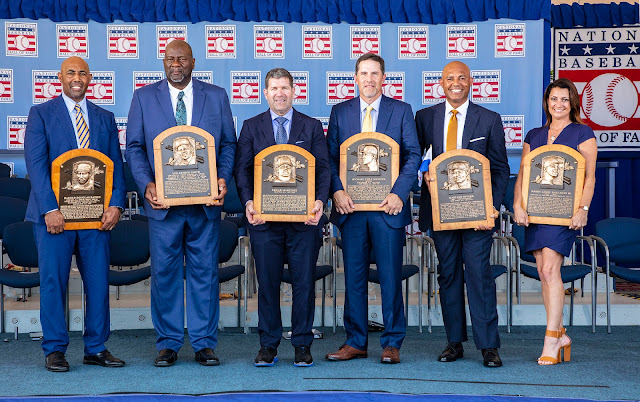 The HOF class of 2020 will finally have their induction ceremony in Cooperstown this fall.  In additions to Jeter--a virtually unanimous pick on his first appearance on the ballot--and Walker the Modern Baseball Era Committee  which reviews players snubbed by the baseball writers' popularity contest included catcher Ted Simmons.  Players from the Negro Leagues were also selected.


There will, however, be inductees honored.  2020 additions to the Hall—Derek Jeter, Larry Walker, Ted Simmons, and the late Marvin Miller, the controversial Executive Director of the Major League Baseball Players Association (MLBPA)from 1966 to 1982. Believe me, team owners and league executives hate that last selection and fought it for years. had their ceremonies canceled last summer by the Coronavirus pandemic.

The 2020 cancelation and the general Covid-19 travel shut down was a huge economic blow to Cooperstown, the Hall, and the Clark family.  With no new inductees the traditional Awards Presentation will remain an indoor, television-only event, Saturday, July 24.  There will, however, be an induction ceremony in September with very limited seating at the Clark Sports Center which has hosted it outside on the lawn since 1992.  But far fewer than the usual crowds which approached or surpassed 50,000 at five of the last six ceremonies from 2014-2019 will be on hand.

Before the pandemic about 315,000 fans annually made the still inconvenient pilgrimage to what is now considered a reverential shrine.  With a full 2021 season reviving enthusiasm for the National Pass Time, and the public eager to resume traveling, those numbers may well be exceeded next year.

Decedents of the Clark family certainly hope so.  They still sit on the Board and own just about all the available accommodations in town.  They are very good at counting money.

Like a Muslim Hajj, very devoted baseball fan is expected to make the pilgrimage at least once in his or her lifetime.  I haven’t met that holy obligation yet.  Contributions to the cause will be gratefully accepted.