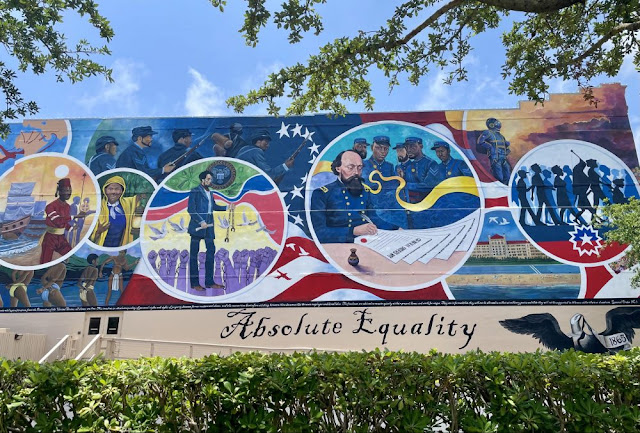 A new mural unveiled in Galveston commemorates Juneteenth and Black history with images representing the enslaved African Esteban who was shipwrecked on the island and became a noted guide for the Spanish, the arrival of other enslaved Africans in Virginia, Abraham Lincoln and the Emancipation Proclamation, General Gordon Granger signing his order announcing the end of slavery and the U.S. Colored Troops he commanded, and modern celebrations of the holiday.

Note—Interest in Juneteenth has exploded nationally since the murder by police of George Floyd and others set off a new national movement.  This week the observance became an official National Holiday.  ABC TV featured a two hour special last night and other networks and local stations have had special programs.  But just a year ago the former denizen of the Whitehouse went out of his way to stoke white racial resentments and stick his thumb in the eye of the Black Lives Matter movement by making a point of holding his first big rally of the pandemic in Tulsa, Oklahoma just weeks after the well-publicized anniversary of the 1921 Tulsa Race Massacre.  His big to-do became a well-documented coronavirus super spreader event.

Abraham Lincoln issued the Emancipation Proclamation on September 22, 1862.  Word spread through the slave grapevine quickly in much of the Confederacy and, as Lincoln had hoped, many slaves abandoned their plantations and sought the safety of Union forces wherever they could.  Not only did this cripple the Rebel economy, but the refugees formed a pool of laborers, teamsters, and—eventually—troops in support of the war effort.

But things were different in Texas at the far western edge of the Confederacy.  Word was slow getting there.  After the fall of Vicksburg in 1863 Confederate territory west of the Mississippi was mostly cut off from the eastern states.  Although word might have leaked through in some places, around Galveston, the main port for cotton export from East Texas, slave owners evidently were successful in keeping their property from learning that they were free. 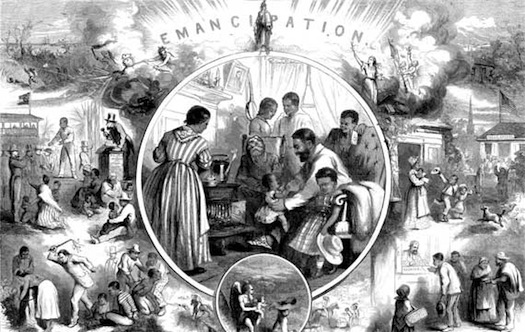 Juneteenth is now the largest and most widespread of all of the local Jubilee celebrations of Emancipation.

Far from the main theater of the war, the last battles were fought in Texas along the Rio Grande on May 13 and Major General Kirby Smith, commander of the Trans-Mississippi District became the last major Rebel commander to formally surrender on June 2.

On June 18 Major General Gordon Granger landed on Galveston Island to take possession of Texas for the Union.  The next day, June 19, the General was said to have stepped onto the balcony of the Ashton Villa and addressed a large crowd of Blacks.  He read them his General Order #3:

The people of Texas are informed that, in accordance with a proclamation from the Executive of the United States, all slaves are free. This involves an absolute equality of personal rights and rights of property between former masters and slaves, and the connection heretofore existing between them becomes that between employer and hired labor. The freedmen are advised to remain quietly at their present homes and work for wages. They are informed that they will not be allowed to collect at military posts and that they will not be supported in idleness either there or elsewhere.

The announcement set off joyous celebrations and the word spread across Texas.  The next year, former slaves marked the occasion with more celebrations, which soon became yearly. The events were similar to those that occurred across the South on local anniversaries of the Jubilee Days of Emancipation. 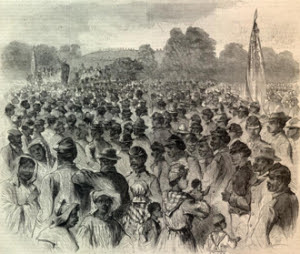 The first Juneteenth celebration one year after the news arrived in Texas.  Note the many celebrants in Union Army forage caps and fragments of uniforms.  In addition to those who had served in the ranks during the war, many other collected the garments while serving as teamsters or laborers for the Army.  Others acquired the gear as surplus after the war.


The Texas observances quickly became major annual events in Black communities.  By 1870 the day became known as Juneteenth and various traditions started to be associated with it.  Outdoor gatherings of extended families, churches, or communities grew to be all day festivals.  The day typically began with a reading of Gordon’s order and the text of the Emancipation Proclamation followed by recitations of family stories, singing songs like Swing Low, Sweet Chariot, dancing, the recitation of poetry, and prayer.  The central event of the day was usually a community-wide barbeque and potluck.

Because slave codes often forbade those in bondage from wearing finery of any kind, by the late 19th Century people turned out in their best clothes.  There were games and contests, particularly baseball, races of all sorts, and—particularly in West Texas—rodeos.

In many towns local blacks pooled their funds to buy land for the annual gatherings.  These Juneteenth Grounds have become city parks in places like Houston and Austin. 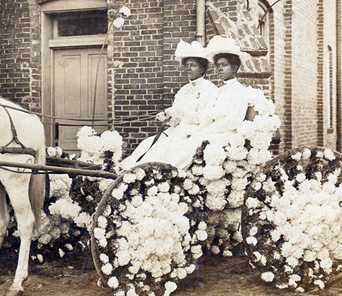 
Needless to say, large, exuberant gatherings of Black people frightened and alarmed many whites.  There were attempts to discouraged participation, but the celebrations continued.  The Depression took a toll on observances as families were dispersed, and many rural Blacks sought work in cities where employers did not take kindly to taking a day off work.  Younger folks also began to look on the gatherings a simply old fashioned.

The Civil Rights movement reignited interest in the ‘50’s and ‘60’s.  After Martin Luther King’s assassination the Reverend Ralph Abernathy promoted celebrations of Juneteenth during the Poor People’s Campaign in Washington.  Observances began to spread beyond Texas. 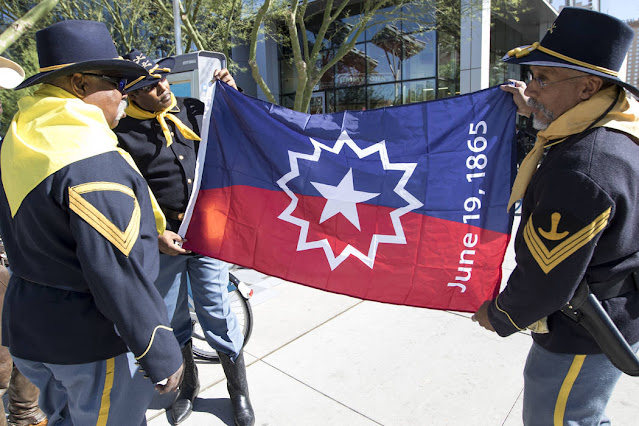 In 1997, the founder of the National Juneteenth Celebration Foundation (NJCF), Ben Haith, created the Juneteenth flag. Raising of the flag ceremonies are now held in Galveston as well other cities across the country. It is raised after the U.S. flag and the national anthem and before the anthem Lift Every Voice and Sing.  Here Buffalo Soldier reenactors hoist the colors.


By 2000 a movement arose to make Juneteenth a holiday of some sort in all states and recognition by the Federal Government.  It is an official state Holiday in Texas and now 49 36 states have granted some sort of recognition including Illinois were Governor J.B. Pritzker signed a bill into law earlier this week which made Juneteenth a full official state holiday including paid days off for state employees and public school teachers.  It also mandates Juneteenth curriculum in the schools.


Then on Thursday President Joe Biden conducted a public signing ceremony establishing a Federal Holiday, Juneteenth National Independence Day.  After years of campaigning by activists like 94-year-old Opal Lee the legislation unanimously passed the Senate and was overwhelmingly approved by the House of Representatives.  Of course, the were 14 no votes, all cast by Republican White Men mostly from former Confederate states, hyper conservative enclaves in Southern California, Arizona, and the sole Montana Representative.

But the deed is done!

Posted by Patrick Murfin at 5:40 AM