1984 Wasn’t Meant to be an Instruction Manual 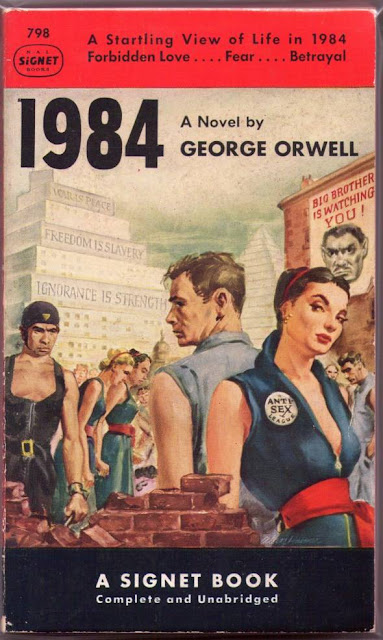 Eric Arthur Blair a/k/a Orwell was at the time a 45 year old English writer who had been born to a civil servant in India.  After a largely unhappy public school education back home—a private, residential academy to Americans—he returned to the orient as a policeman in Burma.  He was an outsider among his British colleagues there, preferring to explore the country, learn the language and culture.  He was soon sympathetic to the colonial people and alienated from his own Empire and career.

In the mid 1920’s Blare left the service and moved to Paris, the scene of a well-known expatriate community of writers and artists.  Even there, he spent more time with the French working class than with the self-exiled intellectuals. After returning to England, he based himself mostly at his parent’s comfortable suburban home while making frequent forays into the poverty stricken London East End.  He tried to live the life of the poor at intervals, for instance as a Kentish hops picker.

Blare began to write about his experiences while teaching school.  His first book Down and Out in Paris and London an account of his life as a self-described tramp was published in 1933 under the nom de plume Orwell to avoid embarrassment to his family. 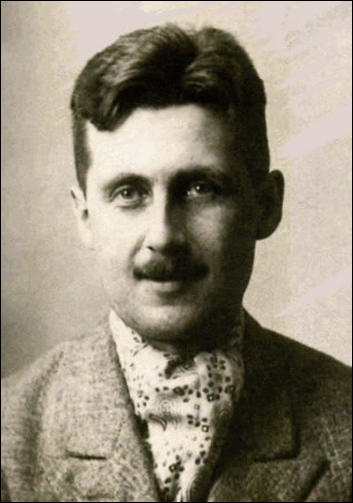 
He published a novel and then a memoir of his Burma years in America but was only slowly establishing himself as a writer.  He knocked around London working part time in a bookstore, rooming with old friends, and then taking a walking tour of the industrial north, then in the depths of the Depression.  He attended meetings of both Oswald Mosley’s Black Shirt fascists who deeply offended him and of the Communists whose cause appealed to him even as their authoritarian methods left him queasy.  The result of that trip was The Road to Wigan Pier, published by the Left Book Club in 1937.  It contained a frank avowal and defense of Socialism while describing his journey from a middle class upbringing to it.  But he was not uncritical of the left and raised questions about barriers to a truly egalitarian society.  His publisher was so afraid that those critiques would not be met well by the left, that he inserted his own apologetic forward in the printed edition.

By the time the book came out Orwell had traveled to Spain to fight fascism.  Arriving in Catalonia he enlisted in the militia of the Partido Obrero de Unificación Marxista—POUM, a Trotskyist Communist Party that was then in coalition with the anarcho-syndicalist Confederación Nacional del Trabajo (CNT) and the Unified Socialist Party of Catalonia, a wing of the Spanish Communist Party, which was backed by Soviet Union.  All were fighting Federico Franco’s Falange forces under a supposedly united Republican banner. 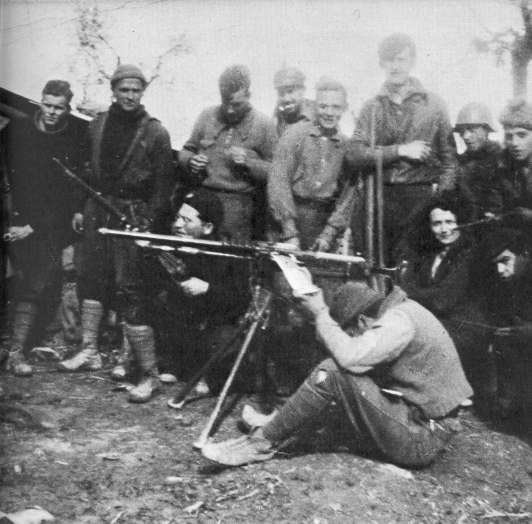 Orwell is the tall man in the back row of this group of international volunteers in the POUM militia in the Spanish Civil War.


Catalonia and its capital Barcelona were the most secure ground of the Republic.  The coalition, largely led by the CNT was firmly in control, well-armed, and the economy, including a vigorous industrial sector and agriculture had been re-organized in workers and peasants co-operatives.  The province was able to send troops to other fronts and provide arms and food to the cause.  It was the heart of the Republic, operating along non-authoritarian communal lines.

Orwell’s experiences in Spain would forever change the idealistic young man.  In his first winter there, he was posted to a quiet sector and experienced mostly discomfort and boredom.  He yearned to get into the fight.  Returning to Barcelona he decided to ask for a transfer to the International Brigade so that he could get to the front around Madrid.  But in May of 1937 street fighting broke out in the city as the Communists attacked POUM, who it labeled as “objectively fascist” for supporting revolutionary reform of society even as the war was pursued.  In this they were allied with the CNT.  But on other issues they clashed with the Anarchists.  Orwell laid low during the fighting, aghast at the breach of solidarity as the war against fascism still raged at the front.

He decided to return to the with the Aragon front with the POUM militia rather than wait for the call from the Communists, who he now deeply mistrusted.  There he was wounded in the throat by sniper fire.  After nearly bleeding to death, he was evacuated back to Barcelona where his wife managed to join him from England.  There the situation had deteriorated even further.  The Communists had gotten the upper hand and had outlawed POUM.  They were rousting and imprisoning members, especially international volunteers like Orwell.  He had to go into hiding.

In July Orwell and his wife managed to escape across the Pyrenees to the Mediterranean village of Banyuls sur Mer, France and from there to England.  He escaped just in time.  On July 15 he was charged in abstencia by the Communist Tribunal for Espionage & High Treason along with POUM leaders with “rabid Trotskyism.”  His trial was held in October.  Had he been in attendance he would have been found guilty and executed.  Orwell was recovering in French Morocco at the time and noted that the trials were “only a by-product of the Russian Trotskyist trials and from the start every kind of lie, including flagrant absurdities, has been circulated in the Communist press.”

Orwell’s health was nearly broken by his experience, as he was nursed back to health he processed his experience in writing.  He had now concluded that authoritarianism of the left and right were mirrors of each other and equally evil.

Homage to Catalonia was published in 1939 and was immediately attacked by the British Communist press and much of the left that was still sympathetic to them.  The opinion at home was the Communists were the heroes of the Spanish Civil War and that POUM and the CNT had sabotaged the war effort by demanding immediate revolutionary reform instead of concentrating on the war effort.  In fact, as Orwell recognized the Communists had concluded that it was better to lose the war in Spain than allow a successful alternative revolutionary system to arise.  The book sold poorly.  It is now considered a classic by the libertarian left.

With Britain’s entry into World War II, Orwell struggled to join the effort.  He was rejected by the military and for most active work because he had contracted tuberculosis in Spain.  It took until 1942 to get a post with the BCC in charge of cultural programing to be aired in India to counter Japanese propaganda there.  He was not comfortable as a bureaucrat and left the service after two years to concentrate on writing his parable of fascism, Animal Farm. 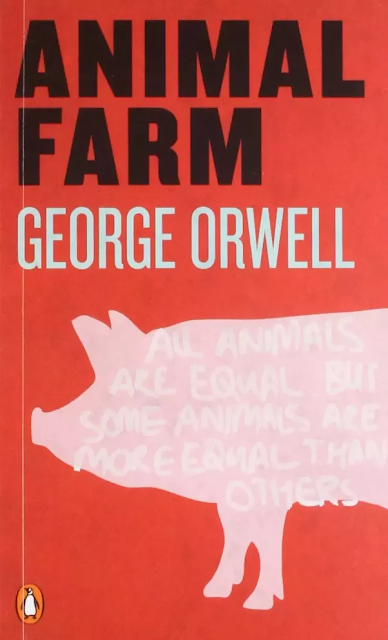 Orlwell's barn yard fable of fascism was his fist critical and popular success.


Animal Farm was Orwell’s first commercial success and sales helped make him financially secure for the first time since his youth.  But his health continued to deteriorate.  He worked desperately on the manuscript for Nineteen Eighty-four.

In this future world Britain was just part of one of three warring totalitarian regimes that between them control the world.  England is now Airstrip One of Oceania which is at war with Eurasia and Eastasia.  Oceania is supposedly led by Big Brother, the hero of the revolution which followed an earlier worldwide war whose image is everywhere along with the admonition that “Big Brother is Watching.”  But Big Brother may not even exist—he may just be a figurehead.   The official ideology of Oceania is EnglishSocialism or IngSoc in the official language New Speak.  But the system is socialism in no recognizable way.  Instead, it is a total surrender of the individual to the state enforced by constant surveillance. 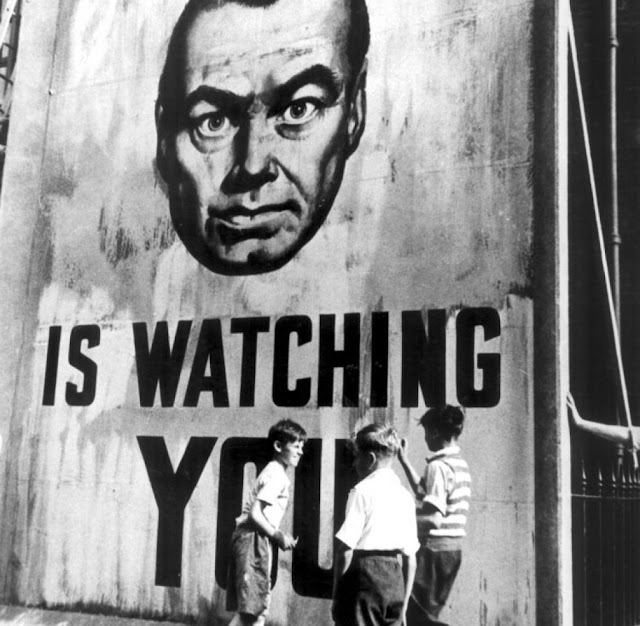 
Protagonist—hero is too strong a word—Winston Smith is a minor functionary in the Ministry of Truth whose growing doubts about the system make him yearn for rebellion.  As Animal Farm was about fascism, Nineteen Eighty-four was clearly an extrapolation of Stalinism.  The book was a success.  In some ways it stoked the Anti-Communism that was sweeping the West, particularly America.


But the real enemy was totalitarianism of any sort.  In America anti-Communism was veering dangerously close to totalitarianism itself.  Enforced conformity and the unchecked power of the security establishment were the hallmarks of post-war America.

Orwell, his health finally collapsing entirely, only tasted the beginning of the influence his novel would have.  He died on January 21, 1950 in London.

73 years after the fact, the technology of the surveillance state described by Orwell has become a reality.  A new hobgoblin—terrorism—is now the excuse to unleash that technology on the citizenry.  Surveillance cameras are everywhere, the cell phones in everyone’s pockets become personal tracking devices, the National Security Agency seems to have the power and the capability to monitor all Americans’ phone usage, e-mail, and computer web surfing habits.

Now in the era of alternative facts and Trumpian double talk, New Speak is fast becoming reality as well. 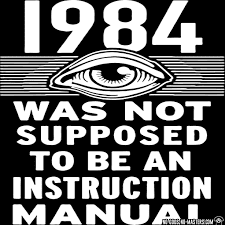 As a popular Facebook meme has it, “1984 was meant to be a warning, not a blueprint.”

Posted by Patrick Murfin at 6:21 AM