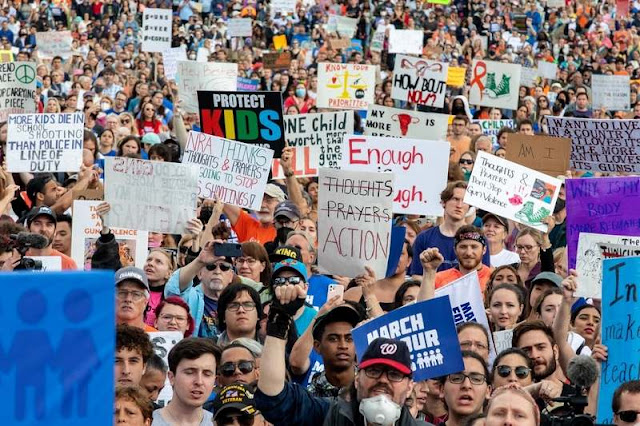 Tens of thousands joined the March for Our Lives event in Washington, D.C. on Saturday.  Their voices were magnified by more than 450 local event in 45 states including the one in Crystal Lake, Illinois.

Saturday more than 50,000 people attended the March for Our Lives flagship event in Washington, D.C.  Many thousands more marched in big cities like Chicago and Los Angeles.  And in every corner of the country there were local events in cities including gun crime ridden urban neighborhoods, towns, villages, and suburbs.  If there is a War on Guns it was a broad front offensive against the NRA, gun manufactures and importers, and bought-and-paid-for politicians.  And the local skirmish in McHenry County played out along a stretch of U.S. Route 14 in Crystal Lake.

The March for Our Lives rallies came less than a month after 10 people were killed in the racist attack at a Buffalo, New York supermarket and 19 children and two teachers were killed at an elementary school in Uvalde, Texas.  There has been a rash of other less deadly but just as tragic mass shootings in recent weeks and floods of high powered weapons fuel the gang wars and car jackings bleeding our cities daily.

March for Our Lives was formed in 2018 after a shooting at Marjory Stoneman Douglas High School in Parkland, Florida, in which 14 students and three adults were killed. Organizers estimated a million people, mostly young, joined protests then.  Although damn little progress was made on the Federal level because of Republican control of Congress and the Orange Autocrat in the White House, some state legislatures, including Florida were forced to enact reforms.  A follow-up March to the Polls help unseat enough gun violence enablers to swing the House of Representatives Democratic and contributed to the victory of President Joe Biden over the Massacre Menace.

The Washington event this year featured gut-wrenching testimony from family members of the Buffalo, Uvalde, and Parkland massacres.  It also heard from two the Parkland survivor leaders of March for Our Lives—David Hogg and X González.  Hogg has become an expert organizer and an articulate advocate for the cause.  He emphasizes election participation to move the needle on comprehensive reform. 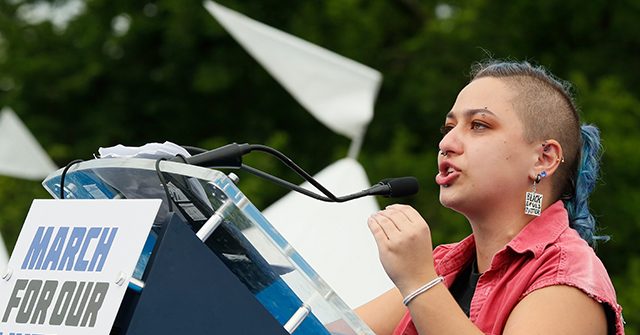 Parkland school shooting survivor and March for Our Lives Organizer X González minced no words in her rage against Congress and massacre enablers.


González, formerly known as Emma, adopted her new name because she does not want people to make assumptions about her identity and “does not consider myself a girl.”  She has also studied to become an effective radical activist at New College of Florida in Sarasota.  She now considers herself a “violence interrupter.”  But at Saturday’s march, her rage boiled over at Congress.

I’ve spent these past four years doing my best to keep my rage in check. To keep my profanity at a minimum so everyone can understand and appreciate the arguments I’m trying to make, but I have reached my fucking limit. We are being murdered. Cursing will not rob us of our innocence.

You say that children are the future, and you never listen to what we say once we’re old enough to disagree with you, you decaying degenerates. You really want to protect children, pass some fucking gun laws…

More than 150 lined Route 14 in Crystal Lake and stretched for a block.

Things were not that pointed in Crystal Lake, but then most of us have as yet been personally insulated from the carnage even as we sympathize with the victims.  But folks were determined and motivated.  About 150 stretched out for over a block carrying signs in a two-hour roadside vigil.  There might have been more, but organizers were cautious about wide-spread publicity to avoid possible confrontations with counter demonstrators.  They relied on members and friends of the sponsoring organizations—Standing Up Against Racism Woodstock, McHenry County NOW, and Together We Stand McHenry County.

Event organizer Amanda Hall of Standing Up Against Racism Woodstock and her three children.


Vigilers may have skewed older than some events—no local youth group was involved in the planning and organization—but there were younger families and children.  Members of several churches were on hand.  I noted folks from First Congregationalist in Crystal Lake, Ridgefield-Crystal Lake Presbyterian, local Catholic parishes, and Willow Crystal Lake.  I am sure there were others.

Teachers were well represented.  A knot of them standing near me attracted the attention of a reporter from the Northwest Herald who featured them in his coverage of the event.

Although the event was officially non-partisan, several Democratic Party officeholders and/or candidates were on hand.  Hardly surprising since Republicans are pretty much united in abetting gun profiteers and the frequently right wing ideological extremists who are often the perpetrators of deadly assaults.  Retiring McHenry County Board Democratic Dean Paula Yensen, who is also President of the NOW chapter, and retiring Board member Kelli Wegener were there along with incumbents running for reelection Michael Vijuk and John Collins.  Old friend and fellow Tree of Life member Gloria Van Hof who is running for a seat was also there.  I also spotted Brian Meyers, Democratic Candidate for State Representative of the 63rd District and McHenry Township Assessor Mary Mahady who is running for County Clerk.  There were likely others.

Congressman Bill Foster not only addressed the crowd, but stayed for in-depth personal conversations with attendees.   It was impressive.


Current Representative for the 14th Congressional District who is locally very popular but has been redistricted out of McHenry County sent a staffer.  But the star of the event was Congressman Bill Foster whose re-drawn district now encompasses a big chunk of southern McHenry County.  He stopped by to offer encouraging and supportive through an inadequate small bullhorn, but unlike many busy pols hot on the campaign trail, stayed for the rest of the event—almost two hours.  He slowly worked his way down the line of folks holding signs but did not just shake hands and move on.  He engaged almost everyone in serious conversations, heard their stories and concerns, and asked probing questions.  For instance, when he talked to Tree of Life’s Dr. Lisa Messinger, a pediatrician, he listened carefully to her advocacy of Medicare for All, although he has so far supported the more piecemeal reform of the current Affordable Care Act (ACA) and heard her concerns for healthcare access for children and for reforms to school lunch programs to offer tasty foods that children will actually eat to combat obesity.


Response from motorists was very supportive with many honking their horns, flashing V signs or thumbs up, and cheering trough open windows.  A whole lot of people are sick to death of the American gun cult.  Only a handful flipped us off or shouted expletives.  It was almost as if the gun fetishists finally realized that they are widely outnumbered even in traditionally conservative McHenry County.

And maybe Congress is also feeling the heat.  On Sunday the broad outlines of a bi-partisan moderate gun reform act that could actually clear the Senate by a filibuster proof margin was announced.  It is far short of the assault weapon ban needed and panders to Republicans on misdirection to hardening school defenses and mental health reforms that won’t screen out many of their own base.  But it is something and Biden has already announced he will sign it.

Congressman Foster in deep conversation with Cathy Johnson of NOW and Tree of Life members Bill Stone and Sandra Bartholmey of Crystal Lake.


To get broader reform voters must turn out NRA enablers and elect responsible people to Congress.  It is critical to hold the House, which pollsters believe will elect a Republican majority due to redistricting and voter suppression and gain a clear majority in the Senate without having to kiss the asses of Joe Manchin and Kyrsten Sinema.

You’ve got your marching orders now.  Time to hit the streets with renewed energy.

Posted by Patrick Murfin at 1:31 PM