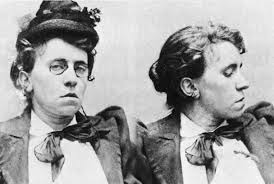 A young Emma Goldman  in her mug shot after her arrest for conspiring with her lover Alexander Berkman  in an assassination attempt on steel baron Henry Clay Frick.

Note—I have posted this poem before, but the two women are particular favorites of mine and I immodestly think that the poem is one of my better efforts.  I also think that they would be astute commentators on the attempted re-subjugation of women by the Supreme Court and Red State governors and legislators.  Emma, of course, a champion of free love and sexual liberation, would never have had faith in the courts to protect women.  An advocate of militant direct action, she would be loudly calling for a real revolution.  Helen, the Wobbly and Socialist, might be supposed to be more moderate, but I wonder if she really would.  She might recommend the ballot box as a defensive action, but she also saw the need for a revolution that would literally “Build a new society in the shell of the old.”

Emma Goldman, whose grave I have visited on pilgrimages to the Haymarket Memorial in Forest Home Cemetery, and Helen Keller, who has fascinated me since seeing The Miracle Worker and reading a paperback biography I ordered from a Scholastic Book Club flyer shared a common birthday on June 27. 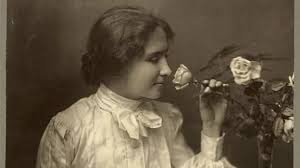 Helen Keller as a student at Radcliffe was already world famous for her astounding achievements overcoming blindness and deafness.


You know, if you have visited here before, that such calendar coincidences trigger an inexplicable urge to commit poetry.

Most people recognize Goldman’s name as America’s most famous anarchist.  They may be surprised to learn that she was also a famous lecturer whose talks on theater, religion, women’s rights, and free love drew as much attention in their day as her calls to smash the state and end capitalism. 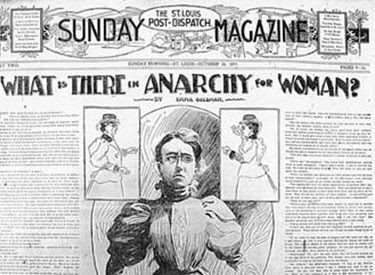 Goldman was such a compelling writer and public figure that even the capitalist press was eager to publish her fiery essays.

Keller’s profound advocacy of Socialism and the IWW has largely been whitewashed from her public image.  But that is changing as folks on the left slowly become aware that she was a comrade and fellow worker. 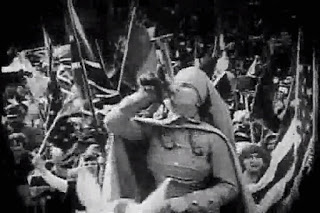 Helen Keller as a Joan of Arc type hero leading the working people of the world to triumph in an allegorical scene from her 1919 silent film Deliverance.  That was the heighth of the post World War I Red Scare which saw hundreds imprisoned,  the IWW and Socialist Party suppressed, and "alien" radicals like Emma Goldman deported.  Yet Helen persisted


In these dark times it is good to remember our Sheroes.

If I can't dance, I don't want to be part of your revolution—Emma Goldman

Emma with her square jaw and carelessly attend hair,

perched upon her nose,

the urban smells of coal fire,

clinging to her frumpy clothes,

barely betraying here and there

Helen, who would have been a delicate beauty

were it not for those disconcerting,

a mantle on her delicate shoulders,

the sweet lilt of a gentlewoman

lost to grunts and moans.

to be a stranger, an exile,

to be a celebrated curiosity.

They learned as a Jew

and as a side show freak,

as women, after all,

but also that they

They swam in a sea of oppression

of the solidarity of the school

that would consume them.

Maybe the world expected little else

who threw her lot early

with the filthy anarchists

to her lover, for god sake,

But the world was aghast

when the delicate Radcliffe flower

who had charmed Mark Twain,

and fell side by side

and the Socialist Wobbly

and a mystic Red Jesus

did not agree on details,

each being a master

But each in her own way

was steadfast to the end

of her long life

for a revolution of liberation

and the ultimate triumph

that as they each

on lecture tour or

if they ever crossed paths

in say, a railway station

in Omaha or a

and fell into each other’s arms

“Sister, sister, I have found you!”

Posted by Patrick Murfin at 7:46 AM