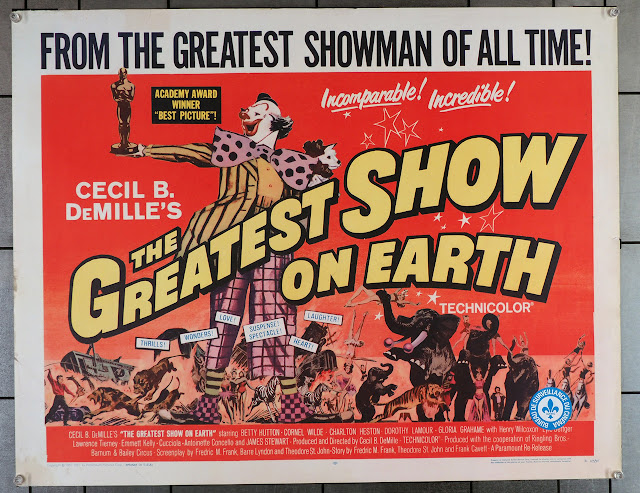 Cecil B. DeMille's 1953 The Greatest Show on Earth was a huge hit and helped save Hollywood as television was keeping people home.  In gratitude the film won the Oscar for Best picture over such certified classics as High Noon, Moulon Rouge, and The Quiet Man.

Old time movie buffs like me are sure to remember the glitzy, gaudy, gauche 1952 Cecil B. DeMille flick The Greatest Show on Earth.  The veteran director put aside his customary sandal and sand Biblical epics to use the Ringling Bros, Barnum & Bailey Circus as the backdrop for a somewhat turgid melodrama.  The film was a box office sensation at the time the movies were losing a battle for viewers to the infant medium of Television.  Impressed, Motion Picture Academy voters picked it as Best Picture over far better films including High Noon, Moulon Rouge, and The Quiet Man, each of which is a certified classic.

The climatic scenes from the movie are a spectacular and gut wrenching circus train wreck and its grizzly aftermath.  In the film a jealous animal trainer and a sideshow operator fired for running crooked games with ties to a shady character with a financial interest in seeing the circus fail, throw a switch leading the circus train to ram a stopped freight.

In the melodramatic climax of the film beloved clown Buttons--James Stewart--exposes his true identity as a doctor on the lam for the mercy killing of his wife to save circus boss Brad--Charlton Heston--who is being cradled by trapeze artist Holly--Betty Hutton--after a gut wrenching train wreck.

The film’s plot threads are all neatly tied up in the wreckage as the beloved never-seen-without-his-make up Buttons the Clown (James Stewart) reveals his true identity as doctor on the lam wanted for the mercy killing of his wife when he saves the life of the rugged and driven circus boss Brad (DeMille favorite Charlton Heston).  Brad’s rival for trapeze artist Holly (Betty Hutton) The Great Sebastian (Cornell Wilde) bitterly nursing an injury that threatens to end his career in the center ring, nobly contributes his blood to help save Brad.  Holly realizes that it was always Brad she loved,  not her erstwhile rival Sebastian, and steps into his role as hardnosed boss to save the circus.  She leads the battered and bloodied troupe into the nearest town at the head of the circus parade while singing the title song and sets up the show for an outside performance.

The movie was the first film that Steven Spielberg saw in a theater and triggered his lifelong passion for the movies.  The train wreck scene in particular inspired his first teen age film efforts and helped inspire his 2011 film Super 8.

What people don’t necessarily know is that DeMille’s circus train wreck was inspired by a true incident, one of the deadliest rail disasters in American history. 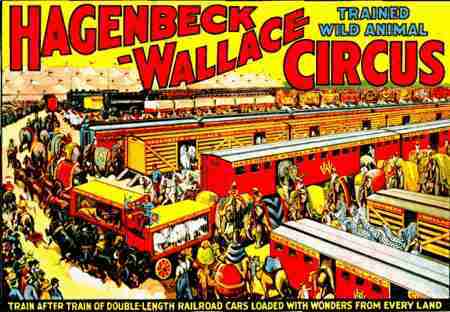 The Hagenbeck-Wallace Circus promoted its shows with posters celebrating its show train.  Unloading the train and a parade to the grounds where the Big Top would be erected were big opportunities to promote the show.


Shortly before dawn on June 22, 1918 a Michigan Central Railroad troop train pulling 20 empty Pullman cars was closely following a slower moving train carrying the cast, crew, animals, and equipment of the Hagenbeck-Wallace Circus, then the second largest traveling show in the country.  Alonzo Sargent, a veteran engineer with sixteen years at the throttle and a spotless record, was at the controls of the deadheading train.

Sargent had been called in for this run at the last minute and had hardly slept in 21 hours.  He knew he was following the slow circus train and had taken care to note signals at several crossings and switch points.  He figured he was two miles or more behind the other train.  But up ahead at the Ivanhoe Interlocking crossing 5½ miles east of Hammond, Indiana the circus train had come to a stop to attend a hot box on a flat car.  The exhausted Sargent momentarily nodded out at the controls of his locomotive.  When he jerked himself awake he could see the red lights of the circus train’s caboose just ahead.  While snoozing he had blown through three signals and the warning flares put out by the proceeding train.

According to his own testimony before an investigating commission:

I awoke suddenly and saw the tail or marker lights showing red on a train directly ahead of me. Not realizing that the rear end of this train was so close. I started to make a service application, but before completing it placed brake-valve handle into emergency position. We struck almost instantly after making the brake application. Don't know whether I closed the throttle or not, but think I did. 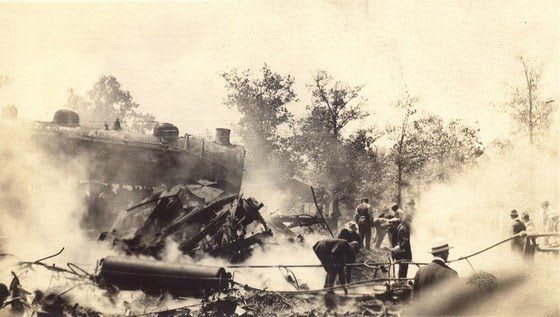 Rescuers and survivors pick through the smouldering rubble of the circus train accident.


Still moving at an estimated 35 miles an hour the train plowed through the caboose and the four ancient wooden passenger cars at the rear.  The cars were jammed with sleeping roustabouts and performers.  Most of the 86 dead were killed instantly, but some were trapped in the wreckage which immediately caught fire from the smashed oil lamps used to illuminate the old cars.  The were 126 severely injured, many of them badly burned, among the estimated 400 circus people and train crew in the four cars and caboose.To his credit, Sargent, who survived the wreck with minor injuries, leapt from his cab and immediately began trying to pull survivors from the wreckage, working frantically for the next two hours. 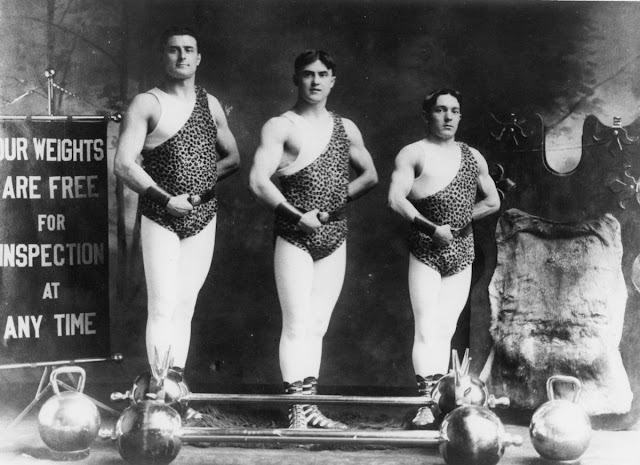 Arthur, Joe and Max Dierickx during their heyday with the Hagenbeck-Wallace Circus before the train wreck that killed Arthur and Max.

Although most of the circus stars were resting in Pullman cars forward, the dead were known to include  Arthur Dierckx and Max Nietzborn of the Great Dierckx Brothers strongman act and Jennie Ward Todd of The Flying Wards.  Most of the victims were burned beyond recognition.

Just months before the wreck the wreck the Showmen’s League of America, a fraternal benefits society formed by William F. “Buffalo Bill” Cody in 1913, had purchased a large plot in Woodlawn Cemetery at the intersection of Cermak Road and Des Plaines Avenue in Forest Park, Illinois for its members.  Five days after the accident the remains of 59 to 61 of the victims were buried in a mass grave.  Markers note unidentified male or female. As was typical of circus folks even when the dead were identified by survivors their real names were often unknown.  So there are markers for Smiley, Baldy, 4 Horse Driver, and others. 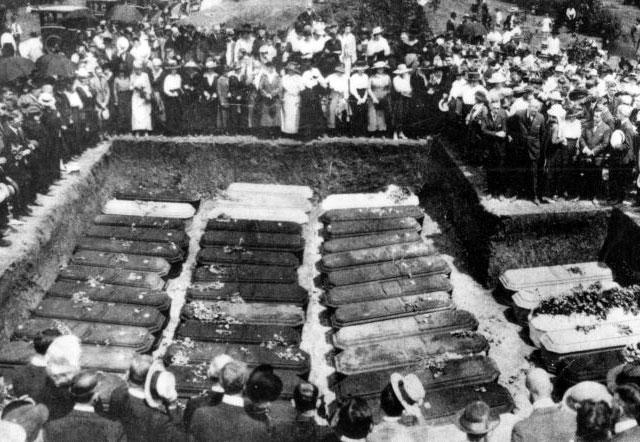 Most of the victims of the train wreck were buried in mass grave at Showmen's Rest at Woodlawn Cemetery near Chicago.  Individual markers were erected--most noting unknown male or female since bodies were burned beyond recognition.

Today the area known as Showmen’s Rest is guarded by five large elephant statues.  There is a gathering every Memorial Day to remember the dead of the train wreck and the many circus and carnival people who continue to be buried there. 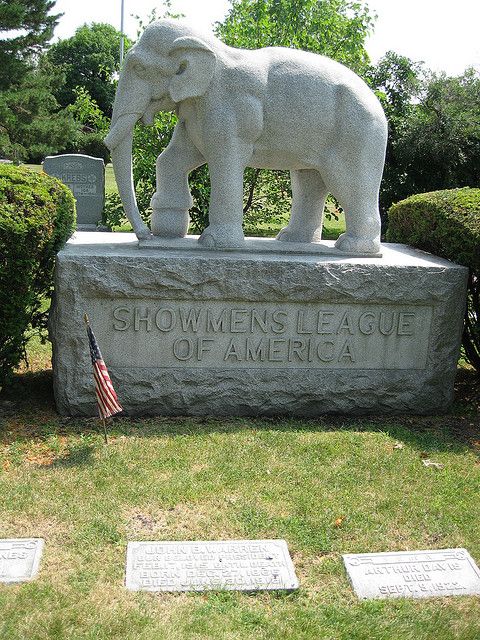 
Meanwhile the shattered Hagenbeck-Wallace show struggled in the spirit of the show must go on later celebrated in DeMille’s film, to resume operations.  In a show of solidarity rivals, including the biggest of them all, the Ringling show, lent equipment, animals and performers to the company.  The circus only missed two dates in Hammond and Monroe, Wisconsin and was able to finish out the season’s tour.

The circus was bought and sold several time after that consolidating with other shows.  It finally succumbed to the Great Depression, folding its tents for the last time in 1938 as the Hagenbeck-Wallace & Forepaugh-Sells Bros. Circus.

The former home base of the show in Peru, Indiana is now the International Circus Hall of Fame.

The Federal investigation of the accident put the blame a squarely on the shoulders of engineer Sargent.  But the report noted that the flimsy, obsolete wooden passenger cars and their oil lamps contributed significantly to the death toll.  After that the old cars were rapidly taken out of service across the country and replaced by modern steel safety cars illuminated and heated by electricity.