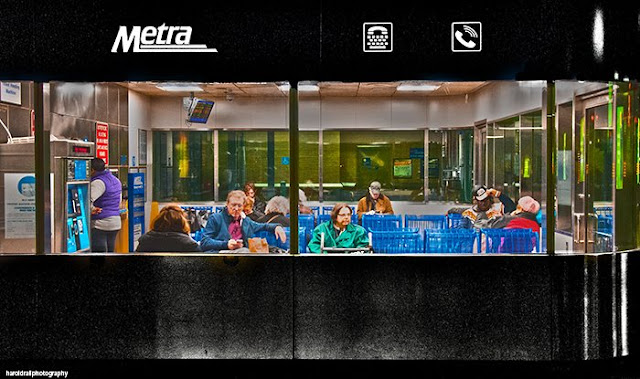 My good friend Harold Rail, photographer and videographer extraordinary, posted the image above on his Facebook page in June 2017.  I was stunned.  Not only was it in some sad ways reminiscent of Edward Hopper’s Nighthawks, but it spoke loudly to me about the world we now live in.

Many Chicagoans will recognize the scene—the glassed-in waiting area on the platform of the Metra commuter station serving the North and Northwest suburbs.  That platform and the train sheds are all that is left of what was once the Chicago & Northwestern Station.  The rest of the once imposing limestone structure was razed in 1984 and replaced with the glass-and-steel 42-story Citicorp Center completed there in 1987.  The bottom three stories were occupied by a new station which was renamed the Ogilvie Transportation Center in 1997, two years after the C&NW merged into the Union Pacific Railroad and surrendered its historic identity.

Today tens of thousands of commuters, and other cattle including some Amtrak passengers pass through the gleaming edifice which is lined with shopping opportunities and a food court worthy of any suburban mall.  The take escalators up to the platform level where there are ticket windows, more shops and kiosks, plenty of flashy illuminated advertising, and a sad little bar that serves over-priced drinks and which is jammed during evening rush hours.  They read arrival and departure times on airline terminal-like video monitors and rush through a bank of doors to the platform and 16 tracks where the locomotives wait with their stainless steel cars in the dim tunnel.

Just inside those doors is the waiting area for those with time to kill before their train.  In off peak hours and on weekends trains can run two hours or more apart leaving plenty of idle time for those who miscalculated and drunks who missed the last one.  If there are any delays at rush hour the little room is quickly overwhelmed, and it doesn’t take long before thousands are spilling over the platforms and out into the waiting commercial arms of the station. 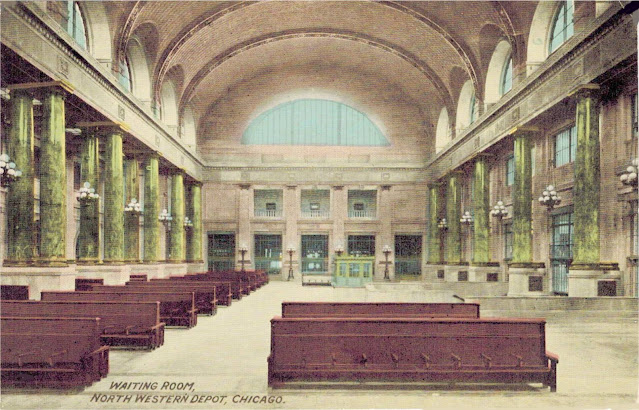 Once upon a time weary travelers could bide their time while pursuing broadsheet newspapers and perhaps getting their shoes shined in the upper level stately waiting room lined with green marble columns, measuring 201 by 202 feet and rising 84 feet to its barrel-vaulted ceiling.

Inspired by a Harold Rail photograph