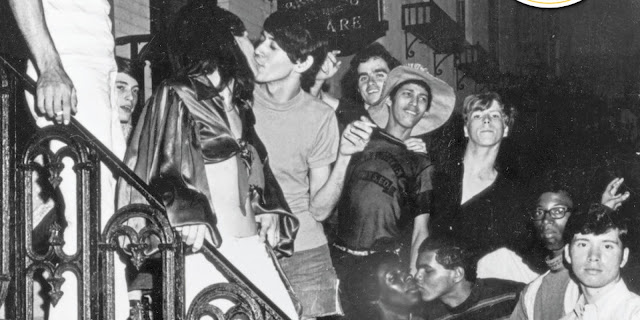 The Stonewall was a dive bar operated by the Mob in New York's Greenwich Village.  It's patrons were outcasts and the most flamboyant of a rough streets scene--young hustlers, drag queens, butch lesbians.  It was also an inter-racial scene that attracted police attention.  Wealthier and more respectable Gays gathered and partied more discretely in posh clubs that authorities usually ignored.

Pride Month is drawing to a close with the anniversary of an unexpected uprising that started it all.  After two years of disruptions due the coronavirus pandemic parades and lavish celebrations are back.  The internet is awash in rainbow Pride Flags and the updates to include transgender and People of Color.  Those additions are particularly apt in light of the history of the spark that ignited the powder keg. 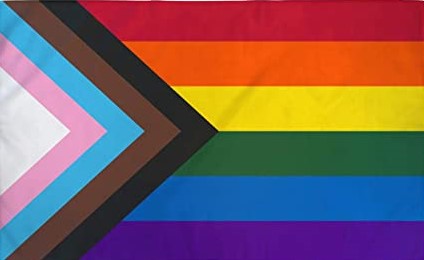 This Rainbow Flag update by Danial Quasar is one of the more popular versions that add recognition to the transgender community and People of Color.


In 2000, before the plague, June was a month of a new surge of Black Lives Matter marches and protests in the wake of the murder by police of George Floyd and a long litany of others.  Members of the LGBTQ of all races were conspicuous participants and leaders in these events.  And that is also as it should be.  Episodes of violence, arson, and looting as well as confrontations between demonstrators and militarized police and National Guardsmen set many tongues wagging bemoaning that “violence never accomplishes anything.”

In point of fact, as much as I am a supporter of militant and creative non-violent direct action and civil disobedience as a tactic, I recognize along with Dr. Martin Luther King that, “Riot is the language of the unheard.”  He recognized that the urban rebellions of the 1960’s grabbed the attention of somnambulant and complacent White America.  Much of the early violence of the marches that month were traced to right wing white Boogaloo activists trying to spark a civil race war, aggressive police action, and simple criminal opportunism, but some was simple pent-up community rage.  Anti-racists have clearly defined the priorities of those more concerned with property damage than Black Lives.

In the end, the BLM movement will outlast the early violence and become a lasting voice for institutional and societal change.  Just as Pride emerged from its violent birth.

Fifty three years ago on the night of June 27, 1969 something snapped when New York City Police made one of their regular raids on a Gay bar.  Instead of meekly submitting to arrest, the denizens of the Stonewall Inn, a Greenwich Village bar operated by the Mafia and patronized by the most marginalized of folks—homeless street kid hustlers, drag queens, butch dikes, and others—resisted when police started to arrest them.

The raid was conducted by a small team of detectives and uniformed officers including women led by Deputy Inspector Seymour Pine of the Public Morals Squad. 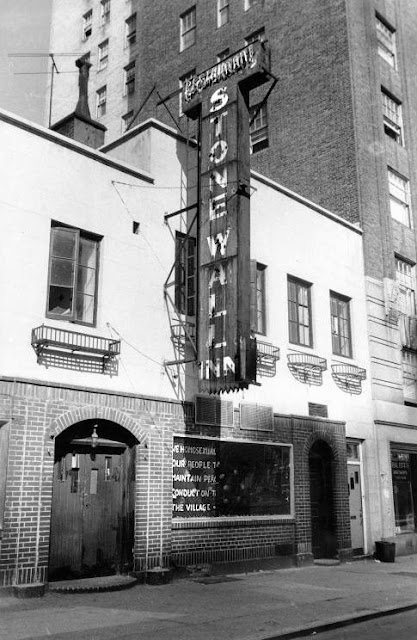 The Stonewall Inn in 1969 looked just as seedy as it was.


For some reason patrons refused to follow the familiar procedure of such raids—allowing restroom inspections of individuals in women’s clothing to determine if they were men and providing identification upon request.  Dumfounded by resistance, police called for backup and patrol wagons.  There was some scuffling inside.

Meanwhile some patrons who had been released were joined by passersby outside the bar.  The crowd quickly swelled.  Taunts and jeers were exchanged between the police and crowd.  The crowd began to interfere as drag queens were led to the wagons.  When a lesbian made several unsuccessful attempts to escape, she was beaten and cried out to the crowd, “Why don’t you guys do something?” 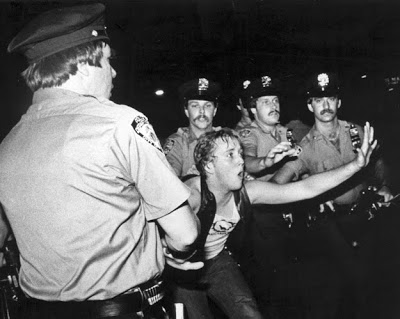 When a lesbian named Betty repeatedly tried to break away from custody and was roughly handled by several cops she famously pleaded, "Why don't you guys do something?"  It became the Remember he Alamo battle cry of a movement.


That ignited the crowd which began pelting police with beer cans, coins, and rubble from a nearby construction site.  They attacked the wagons, freeing some of those arrested.  Police retreated into the bar and barricaded themselves.  They grabbed some members of the crowd as they went, including folk singer Dave Van Ronk who had been playing at a nearby club and came out to investigate the ruckus, and Howard Smith, a writer for the Village Voice.

Observers reported that the most aggressive members of the crowd were the young street kids.  They used an uprooted parking meter as a ram to try and break down the doors of the bar and crashed through the plywood covered windows.  When they got in police drew their pistols and threatened to shoot while rioters used lighter fluid to start a fire. 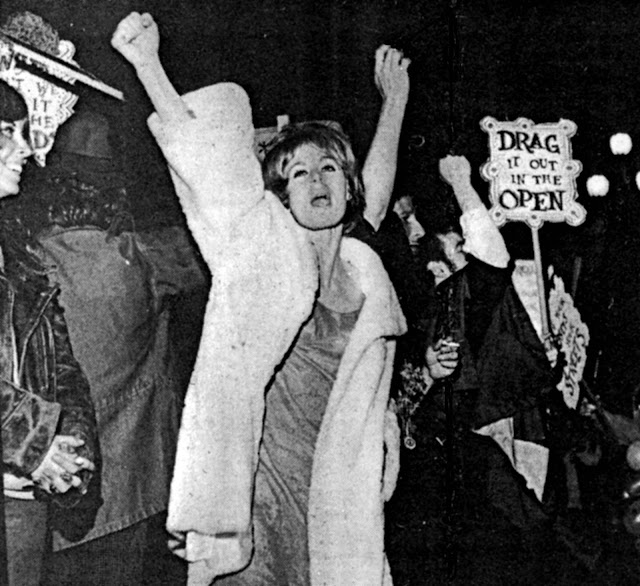 Drag queens played a leading role in the resistance in the the nights that followed the police raid.


The Fire Department responded as the crowd outside grew to hundreds.  The Tactical Police Force (TPF) arrived in riot gear to rescue the besieged officers in the saloon.  They formed a phalanx and moved up the street being blocked and taunted by an impromptu kick line of drag queens and “sissies.”

Rioters and police played a brand of violent tag around the narrow streets of the Village until after 4 AM.

Later that morning the riots were front page news.

And they were not over.  The next night even larger crowds gathered in front of the building and fighting continued.  Despite heavy rain there were sporadic eruptions the next two nights.

Meanwhile the Gay community, which had been largely unorganized except for the small Mattachine Society which advocated a campaign to educate the public that Homosexuals were “normal,” began to meet and debate tactics.  Thousands of fliers were printed for a Wednesday march.

The original rebellion, which had been entirely spontaneous, was already laying the groundwork for a new, open and defiant Gay movement.  Taking cues from the Civil Rights Movement and the Peace Movement, which were also confronting authorities with a new militancy, and taking advantage of the traditional anti-establishment radicalism of the Village, the beginning of a new movement was taking place. 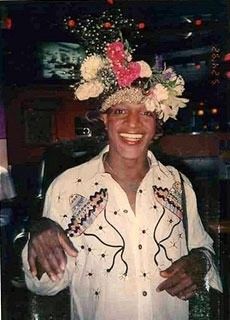 Marsha P. Johnson, a transgender Black woman, is now being recognized and celebrated as the person who threw the first brick at police on the night of the Stonewall uprising.


On Wednesday the Village Voice—the most liberal paper in New York, carried a harshly critical piece on the riots describing participants as “forces of faggotry.”  Angry demonstrators descended on the Voice offices that night and threatened to burn them down.  Other violent confrontations erupted in the neighborhood as police tried to stop marchers, this time for the first time carrying signs and “making demands.”

That was the last night of disturbances, but things changed quickly over the next year.  Two new militant Gay organizations emerged in New York, the Gay Liberation Front, which allied itself with the broader radical movement, and the Gay Activists Alliance which advocated a focused campaign demanding an end to police harassment and for broader rights for Gays.

Similar or allied groups sprang up in major cities and college towns across the country.  New Yorkers founded three new newspapers, Gay, Come Out!, and Gay Power which soon had press runs of 2000 to 2500.  Again, similar publications were founded across the country. 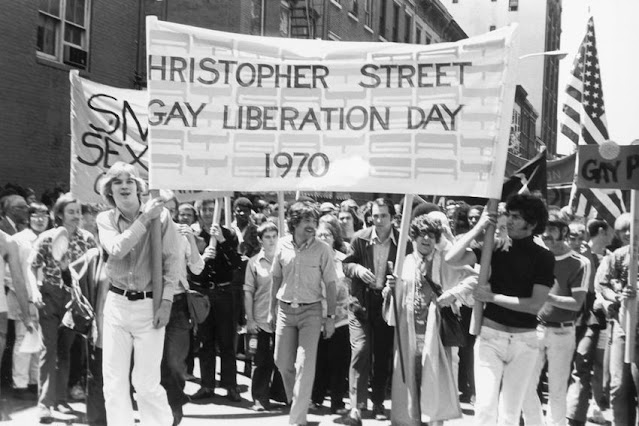 The Christopher Street March on the first anniversary of the Stonewall Rebellion is considered the founding event of the Gay Pride marches now held internationally.


On June 28, 1970 the anniversary of what was now being called the Stonewall Rebellion was marked by Christopher Street Liberation Day and a 51 block march from the Village to Central Park with thousands of marchers filling the streets.  Marches were also held in Chicago and Los Angeles.

These became the Gay Pride Marches and annual events across the country. An indication of how accepted and mainstream Gay rights have become, at least in big cities, is that there are official floats sponsored by city sports teams. Politicians galore and all of the major media turn out to court the potent Gay vote and consumer demographic. 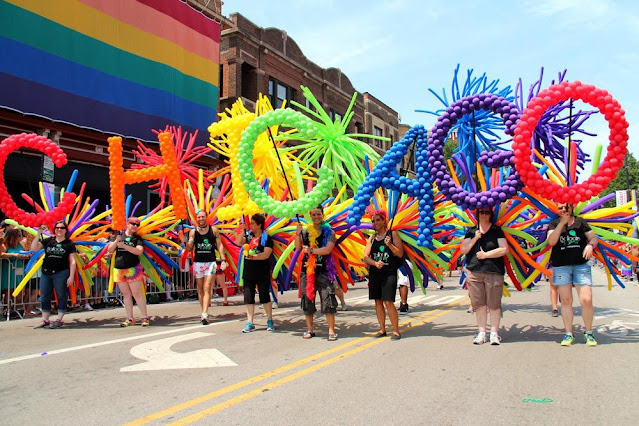 The 2019 Pride Parade in Chicago was typical of colorful and exuberant celebrations around the country which were now courted by politicians and corporations eager to cash in on a lucrative demographic.


In 2019 Gay Pride Parades also reflected a community increasingly under siege by a well-oiled and funded backlash led by religious zealots and abetted by the radicalized Republican Party eager to pander to a big part of its base.  With Republicans in complete control of many governorships and State houses rafts of anti-Gay legislation have been enacted or proposed.

The Supreme Court had recently smiled on so-called religious liberty grounds for refusing service to Gays, lesbians, and transgender folk although it pleasantly surprised many by affirming the legality of marriage equality. 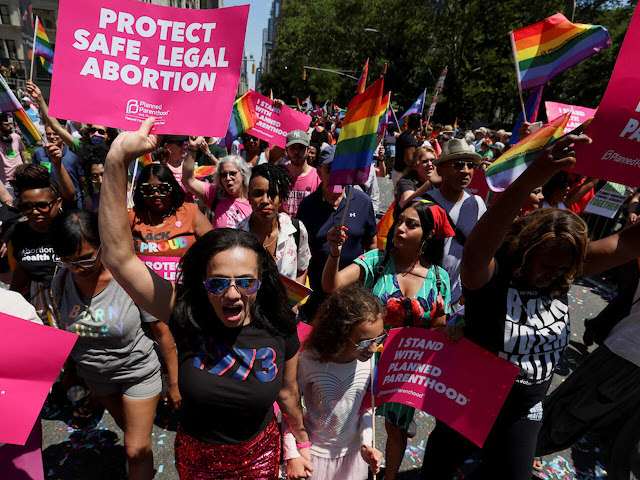 Women and People of Color are bringing their demands for equity, justice, and bodily autonomy to Pride events in numbers greater than ever.


Now the Court, packed by Trump appointed right wing zealot moved to void Roe v. Wade guarantees for the right to abortions.  Although Chief Justice Roberts tried to assure everyone the decision, which argued there is no Federal right to “equal protection under the law,” Justice Clarence Thomas explicitly called for the same standard to be used to strike down Marriage Equality, transgender rights, and a slew of other long established protections.

So, it was not a surprise that the LGBTQ community which enthusiastically joined in the BLM marches or that the debt owed to Black transgender women, drag queens, and butch dikes in the original Stonewall uprising has finally been recognized and celebrated.  This year parades have rallied for abortion rights and body autonomy for all.  And now 53 years after the fact Pride Month has returned to its roots—Resistance!

Posted by Patrick Murfin at 7:49 AM