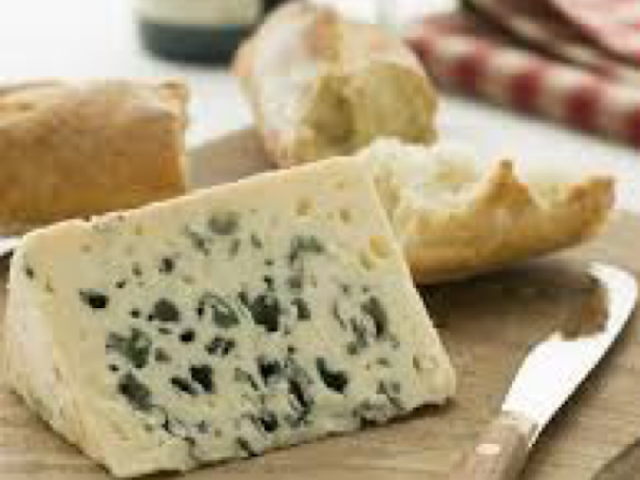 So said an exasperated Charles de Galle, a man who preferred his orders obeyed—and promptly.  He was right both ways.  The French are apparently ungovernable, for which we should all be grateful, and they do love their cheese.  And none of that country’s many cheeses have a more storied or distinguished linage than Roquefort. 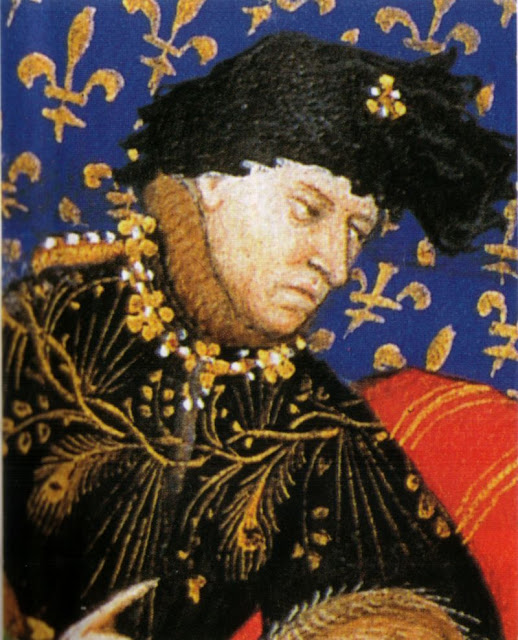 King Charles VI, the Beloved and/or the Mad, King of France an benefactor of the cheese makers of Roquefort-sur-Soulzon.

On June 4, 1411 Charles VI—previously known as Charles the Beloved but by then called Charles the Mad for his periodic spells of violent insanity—issued a Royal edict proclaiming that the people of Roquefort-sur-Soulzon would henceforth have a monopoly on aging a particularly tangy form of cheese made from the milk of ewes.  It is unclear if the order was issued during a period of sanity or delusion.

It really didn’t matter.  For more than 600 years through wars, famines, revolutions, upheaval of every sort, and even the emergence of the European Union they have maintained their privilege more or less intact.  And woe be it to any other producer of bleu cheese from France or anywhere in the world who dares to use the name Roquefort, or even to claim it is in the style of the protected original. 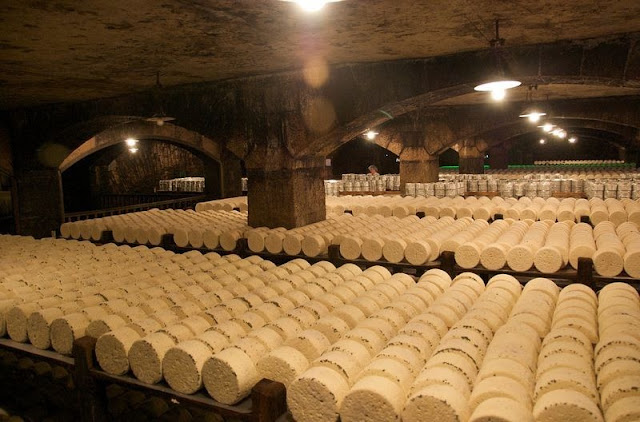 1411 was a long time ago, but the unique cheese had been aged in the Mont Combalou caves in southern France long before that.  The Roman historian Pliny the Elder extolled the virtue of the cheese in 79 AD and there is archeological evidence of cheese making colanders found in the caves from pre-historic times.

Local legend has it that far back in the mists of antiquity a shepherd was diverted from a lunch of bread and cheese in the cool of the caves by a comely lass.  He supposedly returned weeks later to discover that mold from the bread had invaded the ewe’s milk cheese and created a tart cheese marbled with blue-green mold. 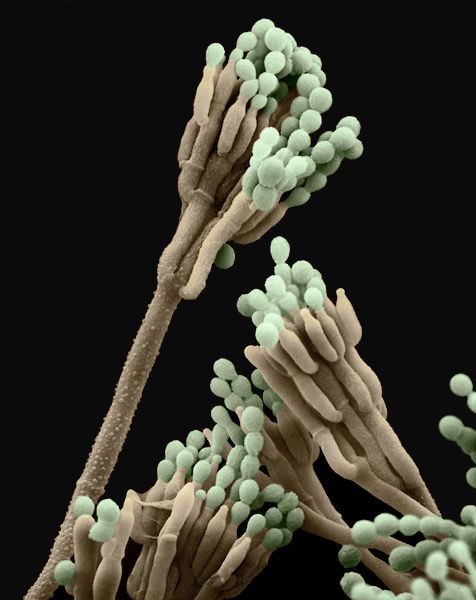 Essentially, that is how the cheese is still made, minus the comely lass.  Bread is left in the caves from six to eight weeks where it picks up mold spores from the soil.  The mold, Penicillium roqueforti, is then dried to a powder.  The powder is introduced to the ewe curd.   The cheese is ripened and aged in the cave for five to six months producing a rindless, firm but crumbly product with a sharp odor and a flavor derived from Butyric acid in the mold.  It is best consumed within six months of being packaged for sale.

The milk of the Lacaune, Manech and Basco-Béarnaise breeds of sheep are used exclusively in production.  About 4.5 liters of milk is required to make one kilogram of Roquefort.  Today that means that 4,500 people are employed on 2,100 farms.  About 19 tons of cheese is produced annually by seven companies with caves in the mountain.

Roquefort is the second most popular cheese produced in France and is widely used across southern Europe in meat sauces, tarts and quiches, pies and fillings.  Only a few hundred tons are exported annually to the United States which ends up mostly in high end salad dressing, wing sauces, and burger toppings—all of which appall French gourmets.  Most Americans call domestically produced blue cheese, Roquefort, but don’t let the French catch you.  The American imitations are a chemistry lesson and much milder than the real thing.

Speaking of America, Roquefort became an international political football in early 2009 when President George W. Bush slapped a 300% tariff on the cheese, by far the highest level of any in the package of tariffs placed on dozens of European luxury goods in response to a European ban on U.S. hormone-treated beef.  The move shocked and outraged the French who were not only hit economically, but whose treasured independence from Washington domination was challenged.

After considerable sturm und drang the European Union and the U.S. negotiated a trade settlement in the dispute and the punitive tariff was lifted.

Charles de Galle had much to say about cheeses and real politic.

But perhaps de Galle would have understood.  After all, he once told Clementine Churchill that nations “…have no friends, only interests.”  On the other hand, he also said, “No country without an atom bomb could properly consider itself independent.”  Maybe it’s a good thing he is dead and gone or he might have nuked us over cheese.

Posted by Patrick Murfin at 6:50 AM