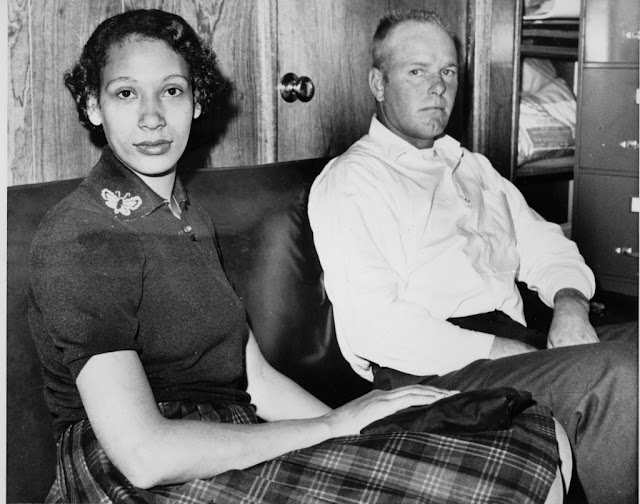 Intensely private Mildred and Richard Loving posed uncomfortably for the press as their case moved through the courts with intense media interest.

Note:  It’s Woodstock Pride Fest today where the LGBTQ community, family members, supporters, and the curious celebrate in McHenry County which not so many years ago was so conservative and hostile that few dared to publicly come out.  Much progress has been made over the last decades including the final victory for Marriage Equality in Illinois a few years ago.  But there are storm clouds on the horizon.  Transgender and genderfluid youth who came out boldly at the first Pride Fest in 2019 find themselves increasingly targeted by proposed legislation demanding school restrooms be open only to those with the reproductive organs and/or identity assigned at birth and preventing athletes from competing with cis-gender teams.  It stands little chance at passage in Illinois, but such laws—and much worse—are sailing through Red State Legislatures.  Meanwhile the prospective Supreme Court decision overturning Roe v. Wade and sending abortion regulation back to the states, has also opened the door to a raft of new anti LGBTQ laws.  And that could even include Marriage Equality which was supported by the Court using the president set by Loving v. Virginia back in 1967 which struck down state anti-miscegenation laws.  If you think that is a bridge to far for the Christian nationalist right wing, you have not been paying attention to how bold and empowered they feel these days.  So today we look back at the couple at the center of that landmark case.

It could not be more appropriate.  Today is Loving Day, the commemoration of a Supreme Court decision that is often forgotten but which profoundly changed America.  Some folks would even like to make it a national holiday.

Mildred Jeter and Richard Loving grew up together in Caroline County, Virginia, near neighbors and friends since he was 17 and she was 11.  As she grew up friendship blossomed into romance.  As is wont to happen when Mildred was 18, she became pregnant.  Richard had no doubts.  He asked his girlfriend to marry him.  They eloped to Washington, D.C. in 1958 then returned home to Central Point, Virginia just north of Richmond set up housekeeping as man and wife.  A story not unlike thousands of others.

Their happiness was short lived.  Within weeks they were awakened to find police in their bedroom.  The couple was arrested and hauled to jail charged with a felony, “cohabiting as man and wife, against the peace and dignity of the Commonwealth.”  Richard, you see, was white and Mildred African American.  They had violated Virginia’s anti-miscegenation law.  At the time 16 states from Delaware to Texas including those of the old Confederacy and most border states made marriage between the races illegal.

The young couple was understandably frightened.  They had known that it was illegal to get married in Virginia, which is why they had gone to Washington.  They did not know that it was a crime to return and live as husband and wife.

To avoid a prison term of one to three years each, the Lovings agreed to leave Virginia, forbidden to return for 25 years tearing them away from their respective families.  They moved to Washington.

Although their relationship was legal in Washington, the nation’s capital was still culturally a Southern city.  The couple found it difficult to secure housing in the essentially segregated city.  They had to endure street harassment from both races when they went out together.  Richard had trouble finding work and was sometimes fired when it was learned that he had a Black wife.  Even their children were harassed.  Both missed their families.  But the couple’s love kept them together.

The passage of the landmark Civil Rights Act of 1964 seemed to offer new hope.    Mildred decided to write a letter to the new Attorney General, Robert F. Kennedy asking for help.  The Justice Department decided not to intervene directly, but Kennedy was sympathetic enough to forward Mildred’s letter to the American Civil Liberties Union in New York.

The ACLU was very interested in the case and decided to support the Loving’s appeal of their original conviction.  Two lawyers, Bernard S. Cohen and Philip J. Hirschkop took the case pro bono.

The appeal process did not go smoothly. The ACLU first appealed to the Virginia courts arguing that the state anti-miscegenation violated the Fourteenth Amendment’s promise of equal protection under the law.  When the Virginia courts dragged their heels in hearing the case, lawyers brought a class action suit in the U.S. District Court for the Eastern District of Virginia. In January 1965, the three-judge District Court decided to allow the Lovings to present their constitutional claims to the Virginia Supreme Court of Appeals. 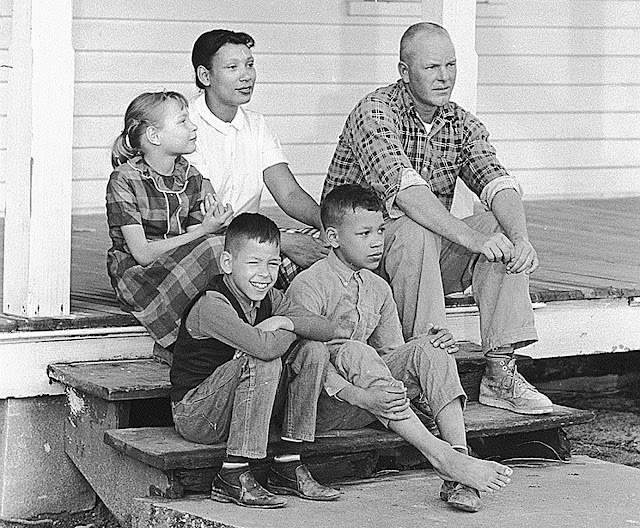 The Lovings with their children, Peggy, Donald, and Sidney.

Virginia Supreme Court Justice Harry L. Carrico ruled against the couple citing the Virginia Constitution.  He also said that the law did not violate equal protection because both defendants, regardless of their race, received the same sentence for the violation.  After modifying the original sentence to allow the couple short visits to their families, Carrico upheld the conviction.

The Loving’s appeal of Justice Carrico’s decision finally reached the Supreme Court.  The Lovings, who personally did not seek the public spotlight, did not attend oral hearings but their lawyer Bernard Cohen conveyed to the Court Richard’s simple personal appeal.  “Mr. Cohen, tell the Court I love my wife, and it is just unfair that I can’t live with her in Virginia.” 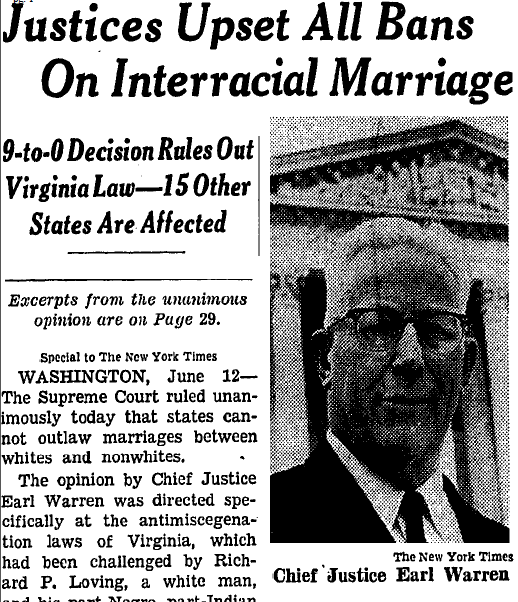 The staid New York Times was typically restrained.  Other headlines were more dramatic and some coverage in Southern papers bordered on hysterical.

On June 12, 1967 the Court stunned the nation by unanimously—and vigorously—upholding the Loving’s appeal.  In his opinion Chief Justice Earl Warren wrote:

Marriage is one of the “basic civil rights of man,” fundamental to our very existence and survival.... To deny this fundamental freedom on so unsupportable a basis as the racial classifications embodied in these statutes, classifications so directly subversive of the principle of equality at the heart of the Fourteenth Amendment, is surely to deprive all the State's citizens of liberty without due process of law. The Fourteenth Amendment requires that the freedom of choice to marry not be restricted by invidious racial discrimination. Under our Constitution, the freedom to marry, or not marry, a person of another race resides with the individual and cannot be infringed by the State…

… There is patently no legitimate overriding purpose independent of invidious racial discrimination which justifies this classification. The fact that Virginia prohibits only interracial marriages involving white persons demonstrates that the racial classifications must stand on their own justification, as measures designed to maintain White Supremacy.

In one fell swoop the anti-miscegenation laws of all states were rendered unenforceable.  But many states were defiant in actually removing them from the books.  It was not until 2000 that the last recalcitrant state, Alabama, repealed the ban on inter-racial marriage that had been written into the state Constitution, when voters overwhelming approved a referendum repealing the provision.

Since the ruling inter-racial marriages, once both rare and dangerous, have grown across the country and now make up more than 10% of all American marriages.

As for the Lovings, they happily returned to Virginia where they raised their three children.  In 1971 a drunk driver struck their car.  Richard, then 51 years old, was killed and Mildred was blinded in her right eye.  She died of pneumonia on May 2, 2008 at the age of 68. 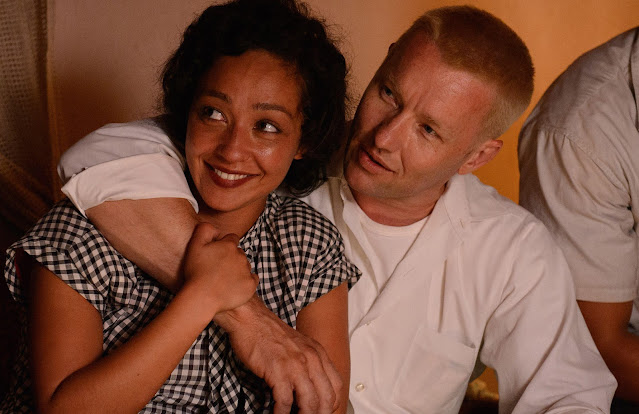 Ruth Negga  and Joel Edgerton stared as Mildred and Richard in the 2011 big-screen biopic Loving which was nominated for a Golden Globe and two Academy Awards.

The precedent of the Loving case also became the basis for the rash of court decisions striking down bans on same gender marriage and was explicitly cited in case after case.  In 2007 the very private Mildred Loving expressed her support for marriage equality:

On June 28, 2015 in the case of Obergefell v. Hodges the Supreme Court held in a 5–4 decision that the Fourteenth Amendment requires all states to grant same-sex marriages and recognize same-sex marriages granted in other states.

The annual celebration of Loving Day began at Parsons the New School for Design in New York City with a graduate thesis project by Ken Tanabe, a graphic designer, who accidentally discovered the Loving case while Googling something else.  The initial celebration was held in New York in 2004 as a multi-racial, multi-cultural event and has spread across the country via a web site and a network of dedicated volunteers. 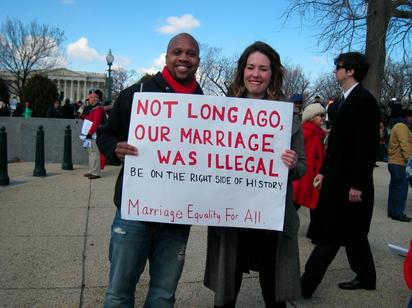 The Loving case was the moral and legal foundation for the movement for Marriage Equality and divided Supreme Court decision that legalized same gender unions.

Many see it as an occasion of special celebration for bi-racial and multi-racial individuals who want to celebrate all parts of their heritage.  As it spread, celebrations have been held in many cities and especially on college campuses.  Marriage Equality supporters also joined in the effort to spread the celebration.

Petitions have been made asking for Loving Day to be recognized as an official national holiday.  While it is unlikely that any holiday that includes paid days off for Federal employees, is likely to be passed anytime soon, declarations of Loving Day as an unofficial holiday have been passed in numerous cities and some states.

Happy Loving Day to all.  Go out and spread the love.

Posted by Patrick Murfin at 4:17 AM