The War When Tribes Almost Drove Out Settler Colonists 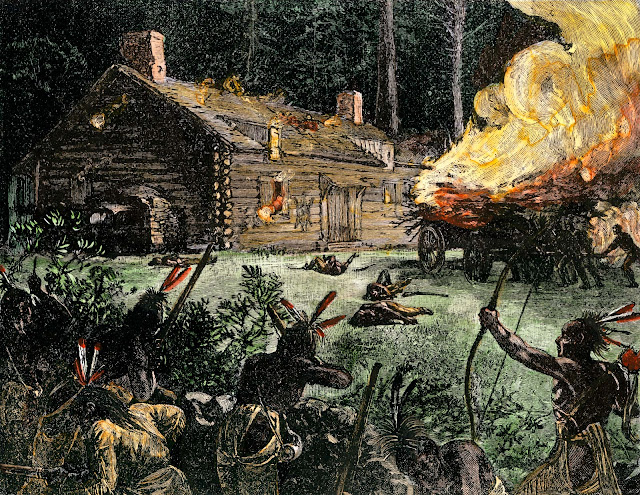 On June 24, 1675 King Philip’s War erupted in New England with the sudden attack on isolated farmsteads in the Town of Swansea in Plymouth Colony by a band of Pokanoket.  The raiders lay siege to the town for five days before capturing and burning it with several settlers killed, including some from other towns who had attempted to raise the siege.

Alarm spread across the colonies.  Forces of Plymouth and Boston responded by raiding and burning a Wampanoag town at Mt. Hope (modern Bristol, Rhode Island).  The war quickly spread across the region with the Wampanoag, Pokanoket, Nipmunk, Podunk, Narragansett, and Nashaway peoples rising up against the colonists and their native allies the Mohegan and Pequoit.

It was the bloodiest conflict between settlers and natives in the early colonial period and per-capita on both sides the bloodiest war ever fought in North America.  Out of a total English population of about 56,000 more than 800 were killed, about 1.5% of the total.  Nearly half of all New England towns were attacked and more remote areas were swept of settlers.

Losses were even worse for native tribes.  Out of about 20,000 people in the various tribes, 3,000 or so were killed outright—about 15% of the population—and many more were injured.  Smaller tribes were nearly destroyed, and many fled their homes to an uncertain fate in the territory of hostile tribes further inland.

What stunned the settlers was that the war erupted after 50 years of general peace and was led by the Wampanoag, long-time allies and trading partners.  The original peace had been made by Massasoit, Sachem of the tribe and Plymouth leaders shortly after their 1620 landing.  It had been Massasoit and his band that had helped the struggling colony survive the first brutal winter, taught them how to grow corn, and were the guests at the legendary First Thanksgiving.  The Wampanoag had prospered trading pelts, meat, and crafts with the colonists for knives, pots, and other desired iron goods.  And the alliance had protected them from their enemies including the Iroquoian Mohegans.

But tensions had gradually been rising as Plymouth and the Massachusetts Bay colony centered at Boston had spread inland, north and south along the coast, and up the Connecticut River stabbing deep into tribal hunting grounds.  The rapid population growth of Colonists put pressure on game populations.  And an economic crisis of sorts arose as the friendly tribes began running out of trade goods and turned to bartering for land—often land that they shared with other tribes.

Attempts to Christianize the tribes was also resented by most, although a few hundred did convert and moved to Praying Towns where they studied the Gospel and learned English crafts and trades.  These Praying Indians were resented by traditionalists, and, when push came to shove, distrusted by their White protectors.

After the elderly Massasoit, who had crafted the alliance died in 1661, relations rapidly deteriorated.  His eldest son Wamsutta became Grand Sachem of the Wampanoag Confederacy.  Wamsutta himself died suddenly, and somewhat mysteriously, while visiting Plymouth Governor Josiah Winslow’s home for negotiations.  He was succeeded as Sachem by his younger brother Metacom, who would become known among the colonists as King Philip. 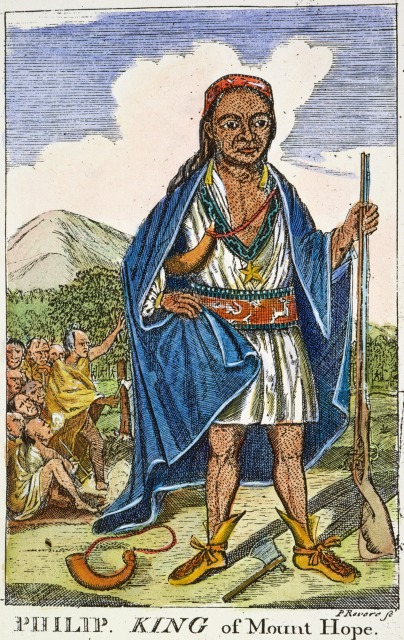 Paul Revere imagined this is what Metacom looked like in  this engraving for the book The Entertaining History of King Philip's War.


In council Metacom had long advocated resistance to the English.  Now he circulated among the tribes, both members of the Wampanoag Confederacy and ancient tribal enemies urging them to unite and rise up.  An advisor to Metacom, Praying Indian John Sassamon and the first native educated at Harvard, became alarmed and warned Plymouth officials of a possible uprising.  His mutilated body was soon found frozen in a pond, likely assassinated by Metacom’s supporters.

Plymouth authorities, acting on tips from other Praying Indians, arrested three warriors, tried them before a jury that included some natives, and hanged them on June 8.  Two weeks later war broke out. 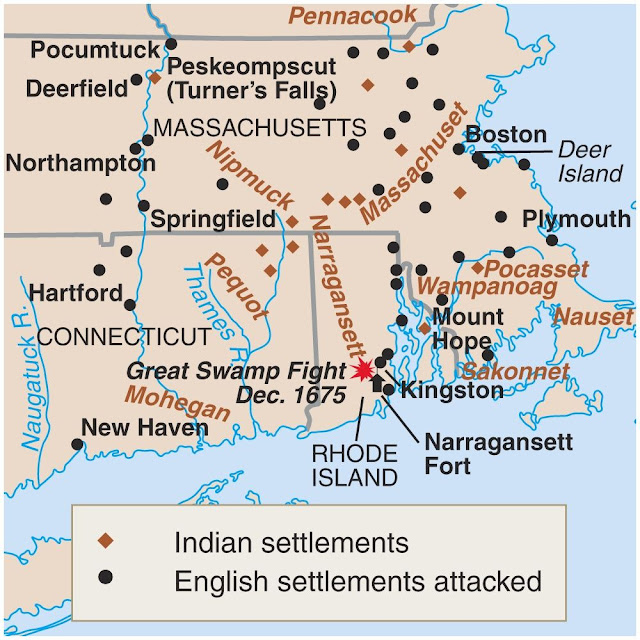 Early in the war the natives were triumphant. During the summer the towns of Middleborough, Dartmouth, Mendon, Brookfield, and Lancaster were attacked, and survivors fled. In early September they attacked Deerfield, Hadley, and Northfield.

100 Militia and unarmed farmers sent to reap harvests abandoned by panicked settlers were ambushed and nearly massacred at Battle of Bloody Bank.


The New England Confederation consisting of the colonies of Plymouth, Massachusetts Bay, Connecticut, and New Haven, declared war on September 9 and began organizing a common defense.  Their first action was a disaster.  A column of about 100 militia and farmers was dispatched to the burned over areas to try to reap abandoned harvests and retrieve other supplies for the coming winter.  They were ambushed near Hadley and nearly massacred at the Battle of Bloody Bank.  More raids against the frontier towns of Springfield and Hatfield continued in the early fall. 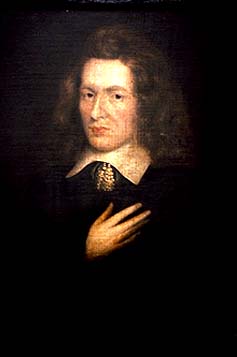 Plymouth Governor Josiah Winslow was the main New England leader in King Philip's War.  The death of Wampanoag Grand Sachem Wamsutta at his home while visiting for negotiations may have been an assassination or an accident, but it set of the war.  He would order the attack on the neutral Narragansett Praying Indians was not only an atrocity, it spread the war.


Led by Plymouth Governor Winslow the Colonists elected not to strike west into the Wamponoag heartland, but south against the Narragansett, who had tried to remain neutral in the war.  Winslow suspected them of harboring Wamponoag women and children and feared that they might join the general uprising.  With friendly Indians for guides the force moved into Rhode Island, not a member of the New England Confederacy and generally friendly to the tribe.  In December they found and destroyed several villages then located the Narragansett stronghold palisade fort near modern South Kingston.  Winslow attacked with about a thousand men across a frozen bog.  The Great Swamp Fight ended with the fort and most of the tribe’s winter provisions burned.  The Narragansett lost at least 300 and the remnants of the tribe were forced away from their homes where many died of exposure or starvation and the surviving warriors joined the general uprising.

The colonists also lost heavily in the fight with 70 killed, including many of their most experienced officers, and 150 wounded. 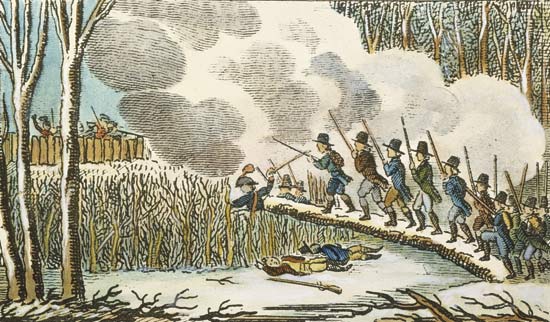 Over the winter the tribal offensive intensified.  Twenty-three towns and villages were attacked.  And in reprisal for the Narragansett raid the Jireh Bull Garrison House near the site of the Great Swamp Fight was attacked, burned to the ground, and its 15 man garrison massacred.  It was a rare instance of a well-fortified colonial post being taken by assault.

Things got even worse that spring.  Plymouth Plantation itself, deep in the most settled and well defended area, was attacked on March 12.  Although the attack was repulsed it demoralized the colonists.  Three more towns were attacked within two weeks.  A sizable company of Massachusetts Militia under a Captain Pierce was ambushed between Pawtucket and Blackstone’s settlement.  Most were killed outright and those taken captive were tortured and killed.

The Rhode Island capital of Providence had to be abandoned and was later burned.  Across the region colonists were forced back on their most populous towns which were fortified to withstand repeated attacks.  Rhode Islanders were forced into a small defensive perimeter around Newport.

But despite battlefield victories, the Indian offensive began to grind to a halt for lack of provisions.  The war had left their own crops neglected and a hunting season was lost to battle.  Hoped for aid from the English enemy the French in Canada did not materialize except for some arms and ammunition used in the northernmost battleground—Massachusetts’s colonies in what is now Maine.

The Wampanoag’s traditional enemies the Pequot and Mohegans joined the colonists in greater numbers and began raiding Wamponoag villages and burning crops.  They played a big role in defending Connecticut from the kind of destruction faced elsewhere.

Desperately Metacom traveled to the lands of his traditional enemies the Mohawks to secure an alliance but instead they launched attacks on his exposed villages and fields.  Hungry bands began leaving the area for safety in Maine, New Hampshire, New York, and even Canada.

In April 1676 the remnants of the Narragansett under Canonchet were defeated and the chief killed.  The next month Massachusetts Militia under Captain William Turner fell upon a large group of natives in a fishing camp at Peskeopscut on the Falls of the Connecticut River killing nearly 200 and forcing many survivors to jump into the river where they likely drown.  It was an expensive victory.  Turner and 40 of his men were also killed.

Battles near Hadley and Marlborough scattered native survivors.  Colonial authorities offered an amnesty to those who would come in to surrender and who could show that they had not been combatants.  Hungry bands began to straggle in.  By early July over 400 had surrendered.

Metacom went into hiding in the Assowamset Swamp near Providence and near where the war had started.  He was hunted my mixed teams of settlers and native allies.  He was found and killed by Praying Indian John Alderman.  He was beheaded, drawn and quartered. 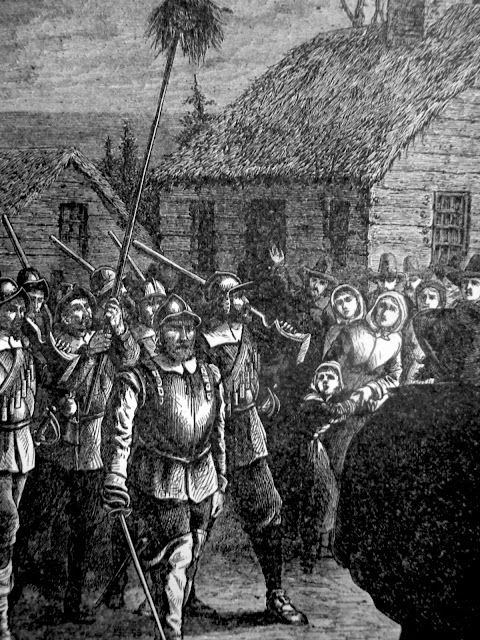 Victorious militia troops march into Plymouth with Metacom's head on a pike.


The severed head of “King Philip” was on display at Plymouth for the next twenty years.  Fighting in northern Maine dragged on another year, but the New England heartland was secure.

Many of the tribes were essentially eliminated as organized bands or pushed beyond the frontier.  Hundreds of native captives were tried and executed or sold as slaves in Bermuda, where many residents today trace their lineage to exiled Indians.

Although Plymouth and other colonies had gone deeply in debt and much capital was destroyed, the amazing population growth of the colonies recouped losses within a few years.  Western settlement was delayed by lingering fears of Indian attacks and by the growing threat of the French but that allowed the core settlements to grow into real cities and encouraged a move away from subsistence farming to trade and manufacture.  By the end of the century the per capita income and standard of living in New England exceeded that of Mother England.