Fifty-five Years Ago The Time Was Right for NOW 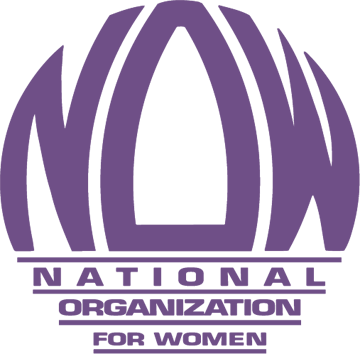 The National Organization for Women's familiar logo had its origins when Betty Freidan doodled the initials NOW on a napkin in a meeting in her hotel room.

On October 29, 1966 thirty charter members gathered in Washington, D.C. to formally launch a new Civil Rights organization dedicated to improving the status of women in all areas of society.  In no time at all National Organization for Women (NOW) was shaking things up and spearheading a new wave of feminist activism.

The steam seemed to have gone out of the women’s movement after decades of struggle finally was rewarded with the adoption of The Nineteenth Amendment to the Constitution in 1920.  Without a clear, unifying focus organizations withered or went off in different directions.  Many assumed that when women exercised the franchise, other societal reforms would follow naturally. 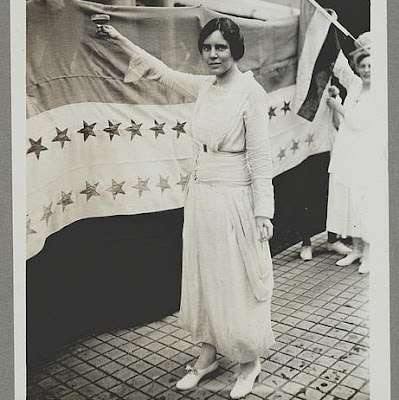 Alice Paul of National Women's Party toasting the final ratification of the 19th Amendment.  After the triumph of women's suffrage the feminist movement became unfocused and splintered.


Culturally the flappers of the 1920s seemed to signal a freedom from the cumbersome garments that had restricted the ability of women to move easily in the world and promised a daring new sexual equality.  The grim realities of the Depression years focused attention on other issues, especially unemployment which as seen as a problem of men who could not support their families.  World War II brought women into the workplace as never before, proving that in a wide range of jobs from the factory floor to the executive suite that they were as capable as men.  But at war’s end there was enormous pressure on women to abandon their new jobs to make way for the waves of returning veterans.  Partly this was to prevent the post-war joblessness of veterans and that had haunted the immediate years after World War I.

By the 1950 cultural expectations were pressing women to conform to a role in an entirely new kind of family—the autonomous nuclear family of dad, mom, and kids with mom at home and without the support of extended family or community.  Even though more than a quarter of women of age remained in the work force they were increasingly confined to career ghettos as teachers, nurses, secretaries, and such with little or no chance of advancement.  Many more women, largely ignored even by activists willing to speak up, were employed in low level factory work, as waitresses, in retail, domestic service, and—most invisible of all—in agriculture.  The existing women’s organizations, while well-meaning and often vocal, seemed incapable of finding a handle on how to deal with the situation. 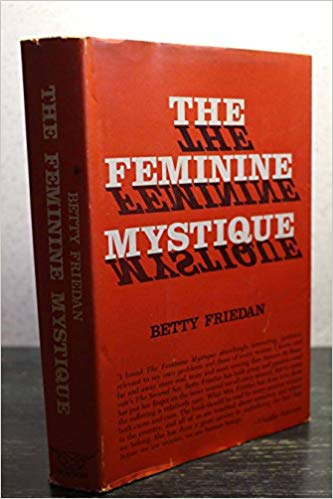 Friedan's The Feminine Mystique was the fuse that lit second wave feminism in the 1960's and which led to the founding of NOW.


There were stirrings of discontent.  Betty Friedan’s 1963 bestselling book The Feminine Mystique is generally regarded as both manifesto and a launching pad for a second wave of feminism.  But as much of a breakthrough as it was, it could not have been successful if it did not touch deep wells of discontent and resentment by women chaffing at their assigned roles in society.  The same year Congress passed the Equal Pay Act of 1963 which called for “equal pay for equal work” for women but left it largely unenforceable and did not address the problem of low paying job ghettos.

The following year Southern Democrats inserted an amendment to add a ban on discrimination on account of gender to the Civil Rights Bill of 1964.  Although the original sponsor of the amendment, Chairman of the House Ways and Means Committee Howard W. Smith of Virginia did have a long relationship with Alice Paul, the former militant leader of the National Women’s Party, most Southern Democrats supported the amendment in hopes it would derail the entire bill.  The strategy failed.  With the strong arm twisting of President Lyndon Johnson, a filibuster in the Senate was broken and the law passed with Title VII banning sex discrimination in employment intact. 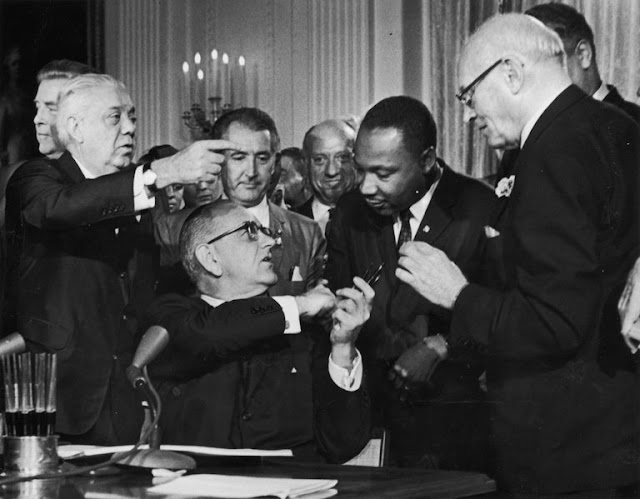 Women were nearly invisible at the ceremony when Lyndon Johnson signed the landmark Civil Rights Act of 1963.  But Title VII of the law included what was meant to be a poison pill to kill the legislation--the inclusion of women the definition of employment discrimination.   NOW arose out of frustration in getting the law enforced for women.


The Equal Employment Opportunity Commission (EEOC) was formed in 1965 to enforce the Civil Rights Act. Aileen Hernandez and Richard Graham fought hard as commission members to enforce the Title VII prohibition on sex discrimination but were outvoted 3 to 2 on the critical issue of whether sex segregation in job advertising was permissible.  A month later Yale law professor Dr. Pauli Murray, a member of the President’s Commission on the Status of Women, made an impassioned public denouncement of the Commission’s decision. After reading an account in the press, Friedan contacted Murray and they began to explore possibilities for further action.

The first opportunity was the Third National Conference of Commissions on the Status of Women which met in Washington June 28-30, 1966 and was attended by both women.  Despite the theme of the Conference, Targets for Action, they and other women were stymied in an attempt to pass a resolution demanding that the EEOC carry out its legal mandate to end sex discrimination in employment. They were told that they had no authority to even put such a resolution forward.  Dissident EEOC commissioners Hernandez and Graham and Commission attorney Sonia Pressman Fuentes privately told Friedan that there was, “…need for an organization to speak on behalf of women in the way civil rights groups had done for Blacks.” 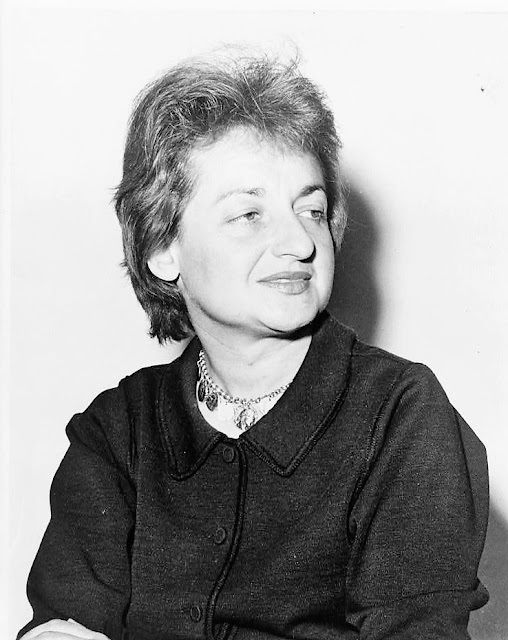 Betty Freidan was not only the best known of the women who gathered in her hotel room in June 1966, she was central to pushing the establishment of a new organization forward and quickly became its leader and public face.


On the evening of June 19 fifteen or twenty angry women met in Freidan’s hotel room to plot a strategy including Murray, Catherine Conroy, Inka O’Hanrahan, Rosalind Loring, Mary Eastwood, Dorothy Haener, and Kay Clarenbach.  They agreed that some sort of organization was needed.  Freidan doodled the initials NOW on a napkin.  The next day at the formal concluding banquet for the Conference 28 women sat together.  According to participant Gene Bower, “Catherine Conroy pulled out a five-dollar bill from her wallet and, in her usual terse style, invited us to ‘put your money down and sign your name.’”  An infant organization was launched.

There was some debate whether NOW would be the National Association of or for Women.  The former would indicate an organization for women only; the latter would be open to men who agreed with its aims.  It was decided to be inclusive although only a handful of men, notably Commissioner Graham, were among the 300 or so charter members who signed on before the official founding conference in October. 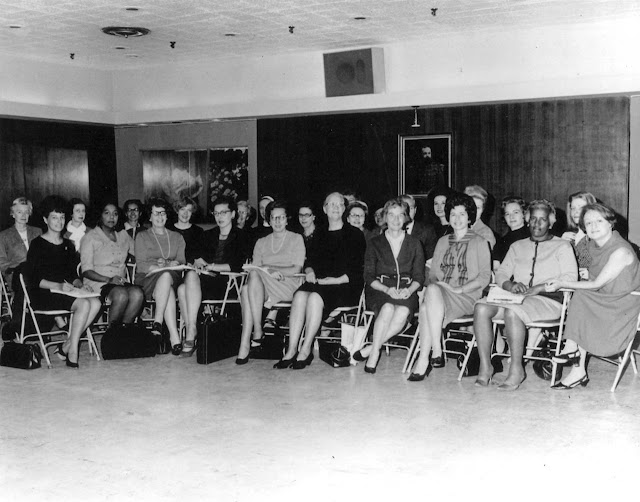 On folding chairs in a modest Washington hotel meeting room members of the NOW founding conference posed for a group photo.  Freidan on the far right.


Although only 10 % of that charter membership was able to attend the founding conference, participants wasted no time getting the new organization up and running.  Freidan was elected President, Clarenbach Board Chair, Hernandez Executive Vice President with the responsibility of day-to-day administration, Graham as Vice President and Caroline Davis Secretary-Treasurer.  The organization entrusted authority to its general membership in Annual Conferences with a Board of 35, including the five officers empowered to act between Conferences.  Between regular Board meetings the five-member Executive Committee would be free to act to carry out decided policy.

Freidan drafted a founding Statement of Purpose, which was intensely debated, but ultimately adopted with mostly cosmetic changes.  It outlined the broad concerns and aims of the organization in all aspects of affairs that impact women and avoided becoming a single issue organization.

On a practical level, the Conformance launched the first initiatives of the new organization including immediate action on Title VII enforcement efforts and authorization for a legal committee to act on behalf of flight attendants and to challenge so-called protective labor legislation.  Task forces were devised to take up these and other issues.

We wasted no time on ceremonials or speeches, gave ourselves barely an hour for lunch and dinner...At times we got very tired and impatient, but there was always a sense that what we were deciding was not just for now “but for a century...” We shared a moving moment of realization that we had now indeed entered history. 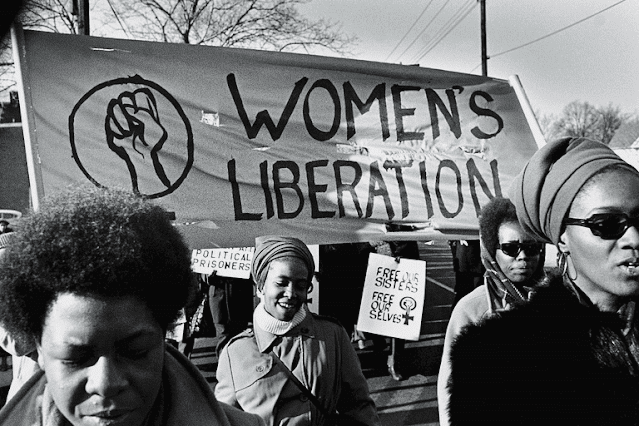 Early on NOW was perceived as an organization of privileged white women by militant Black, Brown, and working class women in the 1970's.  More recently its ambivalent attitudes toward trans and gender non-conforming persons has caused criticism.

Soon the rapidly growing organization in addition to pioneering work on workplace equality was spearheading a renewed drive for the Equal Rights Amendment, demanding the end of restrictions on access to contraceptives and abortion, pushing for equal opportunity in academics and sports.  NOW saw the “second wave” of feminism grow into a tidal wave by the end of the decade.  Dozens of other organizations, many of them seeded by NOW or founded by their leaders joined the efforts on specific issues. 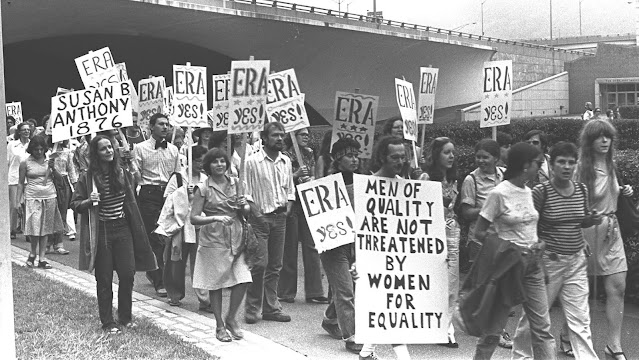 Passing the Equal Rights Amendment and securing abortion rights were central issues for NOW in its first decades.


Despite strains in the movement over militant separatism in the ‘70’s and changes in society, NOW remains the preeminent voice for women’s rights. Its familiar round logo is seen on signs at demonstration across the county wherever past gains are threatened or new ground is to be broken.  It rose to the challenges of Trump Era misogyny and repeated assaults on hard fought feminist gains including freedom of reproductive choice, women’s health, and civil rights protections while confronting sexual harassment, intimidation, and violence. 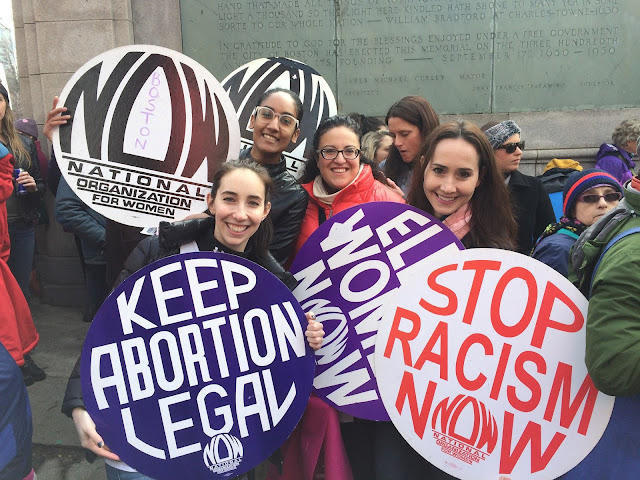 The Trump era, National Women's marches, the Me Too movement, and new battles to keep reproductive rights from being rolled back by Republican legislatures and stacked Federal Courts have drawn many young women into the aging organization.
Posted by Patrick Murfin at 7:07 AM