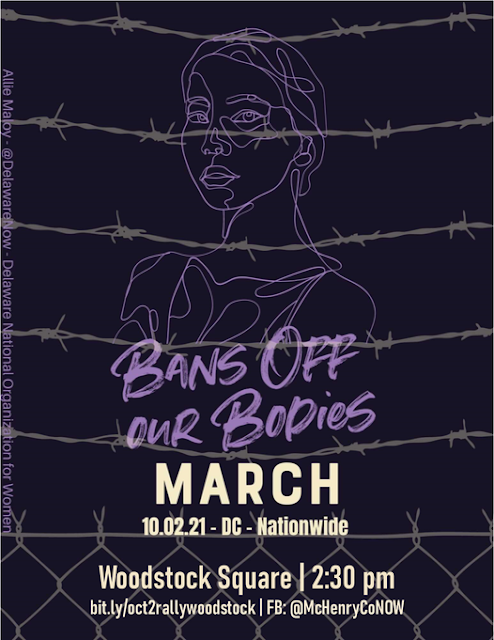 They're back and they are pissed off.  Who?  The women by the millions who launched the resistance the day after pitiful inauguration of the former Resident of the White House and his minions in Congress, state capitols, and local government in January 2017.  That led directly to women seeking election at every level, the Blue Wave election of 2020 that re-took the House of Representatives and launched the powerful new voice of the Squad, and in no small measure mobilized the voters who ousted the scum-bag-in-chief.  They also amplified the Me Too movement and inspired other resistance movements to take to the streets in unprecedented numbers. 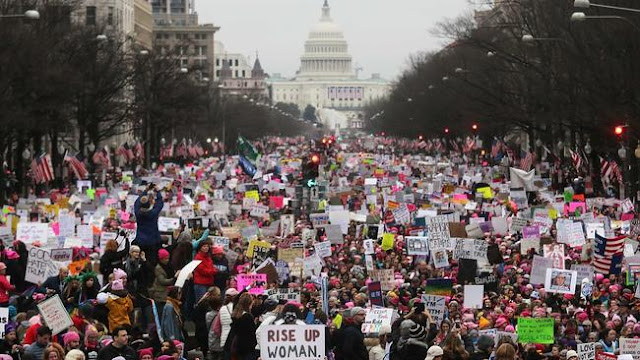 The day after the Cheeto's inauguration in 2017 the first Women's March jump started the Resistance that ultimately ousted the corrupt traitor from office.

Despite these successes, Federal courts were stacked against them and the Supreme Court now has a majority hostile to women, their bodily autonomy, and rights.  Enabled by gerrymandering, voter suppression schemes, deep pockets funding Astro turf organizations and candidates, and MAGA delusional madness, Red State governors and legislatures have launched relentless attacks on abortion rights and women’s rights to control their own bodies and lives.  The recent Texas law which the Supremes allowed to go into effect circumvented the established right to abortions under the Roe v Wade decision by placing a civil bounty of $1000 on anyone who aids an abortion in any way to be paid by the state for each successful civil suit brought against them.  More than a dozen states are ginning up copycat laws. 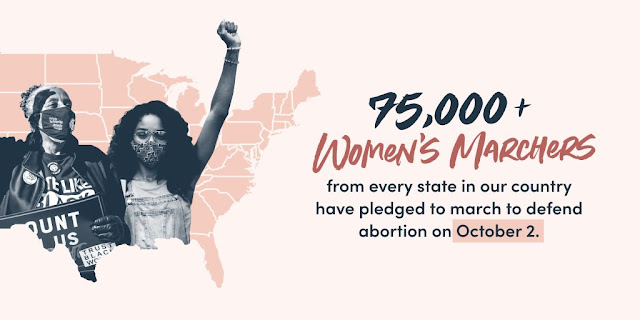 Since this graphic was created the number signed up for marches today has swelled to well over a million.

So this fall’s iteration of the Women’s March which will be held today in Washington, D.C. with more than 650 sister marches around the county will Rally for Abortion Justice.  It should be the largest single-day mobilization dedicated to abortion justice and reproductive freedom in history.

A call to march posted by one of the March’s chief sponsoring organizations Planned Parenthood stated:

On October 2, we’re marching in every single state ahead of the Supreme Court reconvening on October 4. Women’s March and more than 90 other organizations, including National Latina Institute for Reproductive Justice, Planned Parenthood, SHERO Mississippi, Mississippi in Action, Access Reproductive Care-Southeast, The Frontline, Working Families Party, SisterSong, [and the Unitarian Universalist Association]  are organizing a national call to mobilize and defend our reproductive rights.

Abortion has never been fully accessible, but we are at the risk of losing our reproductive freedom completely. The call to action is clear, and urgent. The relentless attacks from Texas to Mississippi are ramping up quickly. Anti-choice extremists have a deep desire to return to a time when there was more clear and effective domination and control over queer and trans folks, women, and people of color; they want to revive those old values and societal norms to the point of re-acceptance. The authoritarian agenda of reproductive control is fueled by misogyny and racism - and we must challenge it, together.

On October 2, we’re going to send the Supreme Court and lawmakers across the country a clear, unified message. The attack on our reproductive rights will not be tolerated.

We have this opportunity to invite all the people that know us and love us into this important movement and work united as we build something better for our families and communities. As a small powerful group tries to come for our human rights over and over again, we’ll never let go of our vision of reproductive justice; for unfettered abortion access and everything we need to support and grow our families to thrive and live healthy lives.

The Washington March will begin at noon at Freedom Plaza, 1455 Pennsylvania Ave NW and march to the steps of the United States Supreme Court.  In Chicago the March to Defend Abortion Access will begin at 11:30 at the Daley Center, 50 West Washington Street.

Closer to home for those of us in McHenry County the Rally for Rights will be held on Woodstock Square at 2:30 pm, rain or shine.  Participants are asked to mask up and come with suitable rain gear.  Members and friend of the Tree of Life Unitarian Universalist Congregation in McHenry will be there.  Look for the TOL banner if you want to march with us.  The local March is organized by the Women’s March Woodstock,  McHenry County NOW, Democratic Women and other progressive organizations.

Don’t be surprised if today’s uprising is as effective at the first one, pink pussy hats or no. 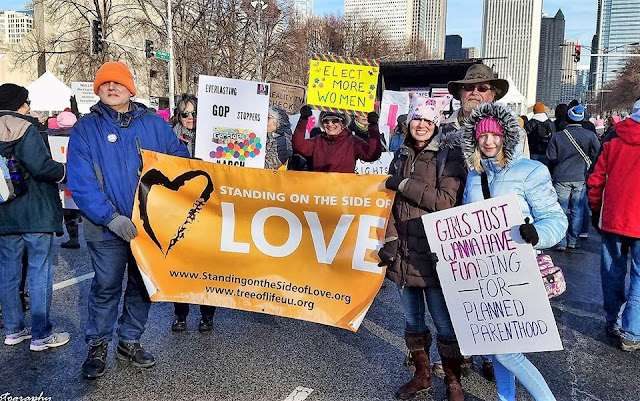 It has been one of the honors of my life to be able to attend and support in Chicago and Woodstock as a male ally since the beginning.  After the second Women’s March in Chicago in January 2018 I dared write:

Today, I Am a Woman

After the Chicago Women’s March

Today, I am a woman—

a never hit on by Cosby, Weinstein, or Trump woman,

a lumbering lummox of a lady,

a disappointment all around.

But Sisters, today, I am a woman—

if you will have me.

Tomorrow I will be just another prick.

Posted by Patrick Murfin at 8:47 AM