Shoemakers and Coopers Lead the Way—First Colonial Workers to Organize 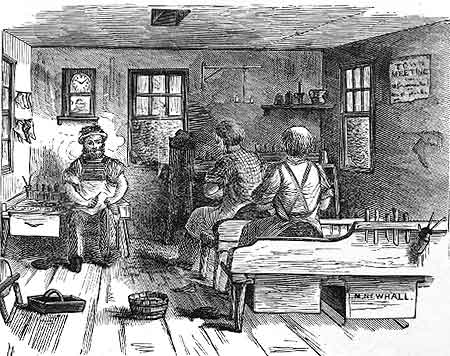 A typical Colonial shoe shop--a Master, journeymen, or possibly an apprentice.  Every shoe or boot made by hand with minimal tools and a small investment in leather.  Cobblers required much less capital and equipment than many other trades making it easier for craftsmen to set up shop.

According to some sources the first labor unions in the English Colonies of North America were organized in Boston on this date in 1648.  Close but no cigar.  In fact, it is wrong on at least a couple of different counts.

First, it was not the date that shoemakers and coopers first organized.  That had happened earlier.  It was the first time any organizations of craftsmen were legally recognized with an official Charter to allow them to operate.

Second, these organizations were not, in the modern sense, trade unions, which consist of employees organized to bargain with their employers for wages, benefits, and over conditions on the job like work rules and seniority. 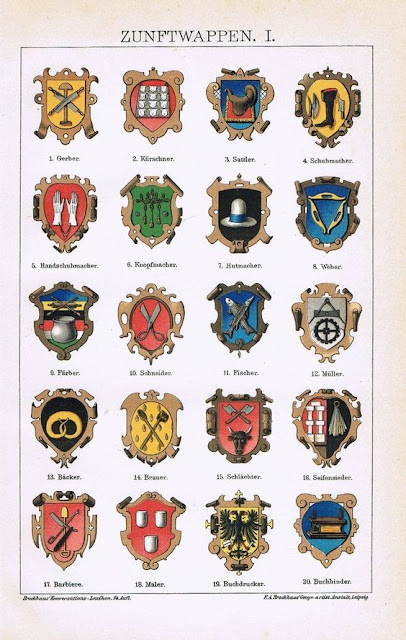 Coats of Arms for some medieval German guilds featured tools of the craft.  Shoemakers top right.

These organizations mimicked the medieval guilds, companies of master craftsmen organized to protect the craft, set prices, and provide fraternal aid and benefits to their members.  Guilds had played a powerful roll in transitioning from a feudal system to the emergence of cities, mercantile trade, and the burgher class as a powerful new political force.  They were organizations of master craftsmen, who in turn were often the employers of journeymen and apprentices.

Since its founding in 1630 as the capital and hub of the new colony of Massachusetts Bay by that “company of saints,” the Puritans, civic authorities had tried to suppress class distinction.  But after only 18 years Boston was a rapidly growing port city and the trade center for an expanding arc of settlements stretching along the coast and reaching inland by dozens of miles.  Craftsmen had naturally emigrated from England and set up shops to make and sell goods that did not have to be imported at enormous costs across the Atlantic.  These crafts included those related to ship building and supplies; smiths—metal craftsmen—of various types; carpenters, masons, thatchers, shingle weavers, and others in construction trades; and those who provided needed personal items like tailors, hatters, drapers, and shoemakers.

These craftsmen, sometimes relatively wealthy, but universally recognized as below the status of gentlemen or free holding farmers, yearned for the respect and mutual support they had enjoyed in the mother country as members of guilds.  And in some cases, there were now enough shops that competition was driving down prices.  They wanted to fix prices to preserve income, as well as to prevent others, not properly steeped in the traditions of the crafts and who had not completed training as apprentices and experience as journeymen from establishing themselves.

The Puritan fathers on the General Court, the colony’s governing body, were highly suspicious. 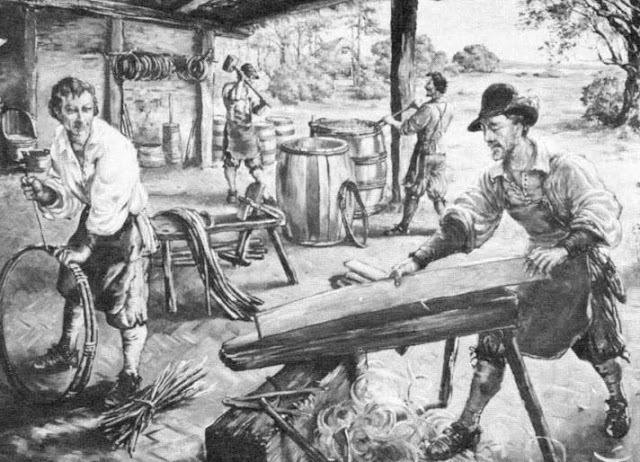 The movement to gain official sanction with charters was led by the shoemakers and the coopers.  Of all of the trades, shoemakers probably had the lowest status because they did not require much capital to open a shop.  They were generally small shops where the craftsman did most or all of the work or employing only one or two journeymen and maybe an apprentice.  Coopers on the other hand, were essential for the colonies burgeoning trade.  So many things, solids as well as liquids, were shipped in barrels in those days—grain from the countryside and beer, the universal beverage of choice where potable water was scarce, for instance.  But perhaps most important—barrels made by coopers were essential for shipping what was becoming the number one export of the colony since local fur supplies had been depleted—salt cod.

What the shoemakers lacked in social standing they made up for in numbers—there were several shops in Boston and more in the surrounding villages—and a certain propensity to make themselves heard in Town meetings and elsewhere.  The coopers had economic clout.

So, it was two these two trades that the General Court granted the first charters to The Company of Shoemakers and The Company Coopers.  But they placed severe restrictions on the fledgling organization, barring them from many of the privileges of English guilds. The Court approved the association solely “for the suppression of inferior workmanship.”  They were stripped of the power to cooperate to provide education and fraternal benefits to their members.  Most importantly, they were forbidden to act “contrary to the public interest” by fixing prices.

Despite the official limitations of the charters, once organized the companies informally and secretly compelled their members to adhere to agreed upon pricing.  Within decades they were doing so openly.

Shoemakers would continue to press for more effective organization.  Courts suppressed an attempt by Philadelphia shoemakers to organize to fix prices and set wages for journeymen and apprentices in 1805. 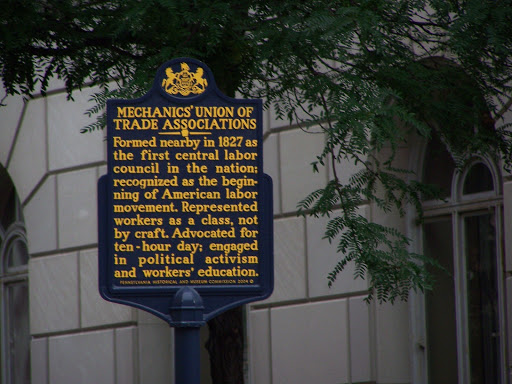 About the same time those journeymen and apprentices began to organize trade organizations separate from the associations of the master craftsmen, their employers.  These were the first proto-unions.  In 1827 to protest debtors prison sentences in a time of financial panic, Philadelphia workers from several trades came together to launch the short-lived Mechanics’ Union of Trade Association.  Although crushed within two years, they are generally viewed at the beginning of a true trade union movement in the United States.