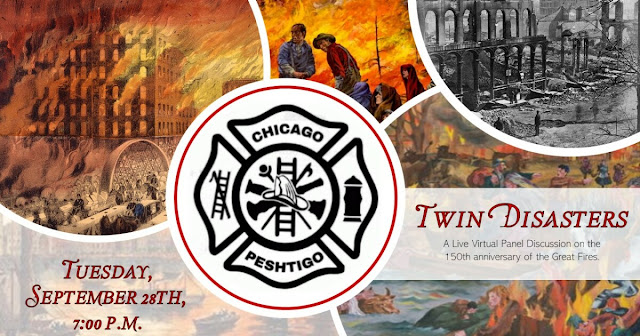 The Chicago and Peshtigo, Wisconsin fires of October 8, 1871 were just two of the deadly blazes that swept the upper Midwest that day.  Libraries in Illinois and Wisconsin hosted a virtual on-line discussion.

Note—Back by popular demand, especially that of Ron Relic, and updated.

You may have noticed that this is National Fire Protection Week.  The annual event is marked by news stories extolling the virtues of smoke alarms and family fire evacuation drills.  Your local fire station may host school field trips or an open house—maybe they will let you climb on an engine or even slide down a pole.  Ask and you will be told that this week was selected because the Great Chicago Fire broke out on October 8, 1871.

This is the sesquicentennial of that conflagration—and also of little remembered but even deadlier Midwestern fires.

The Chicago fire was certainly memorable.  After breaking out in an immigrant south side neighborhood, winds whipped flames north and west across the sprawling city.  It burned for two days consuming 4 square miles, including the downtown business district, killing an estimated 200-300 and leaving 90,000 people homeless.  The fire originated in the O’Leary family barn—the house was spared because it was up wind—but neither the lady of the house or her cow had anything to do with it.  Apparently neighborhood layabouts set it off while shooting craps. 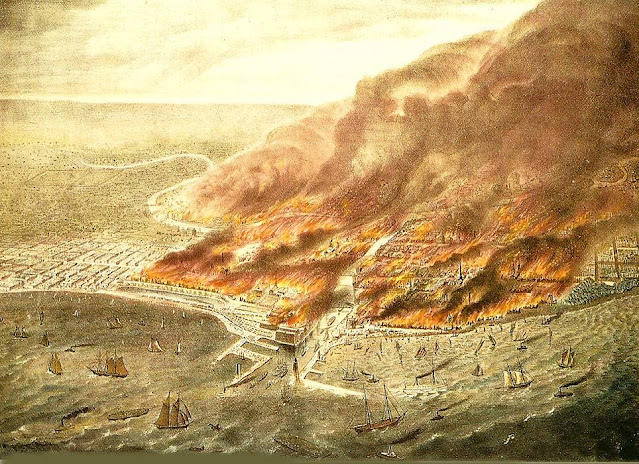 A popular contemporary lithograph print showed an imaginary aerial view of the Great Chicago Fire after it jumped the Chicago River burning the North side of the the city.

Word of the fire spread rapidly across the country and within a week national publications were carrying firsthand accounts and illustrations of the carnage.  The city famously rose from the ashes, replacing its largely ramshackle wooden buildings with modern—and fire resistant—brick and stone.  In less than a decade the city had not only fully recovered, but it had also doubled again in size.

But the fire in Chicago was not the only conflagration that day.  After an extended long drought that covered the entire upper Midwest, a fast moving cold front drove intense winds before it.  Fires swept Holland and Manistee, Michigan and swaths of surrounding areas on the east shore of Lake Michigan.  More than 200 died when another fire consumed Port Huron, Michigan on the southern shores of Lake Huron.

As devastating as those fires were, they all paled compared to the great fire in Wisconsin’s North Woods centered on the lumber town of Peshtigo.  Despite tinder dry conditions, careless neglect sparked several fires in the area that had burned more or less unchecked for several days before.  These fires were attributed to cinders from railroad locomotive smokestacks, small heating and cooking fires left unattended by hunters, farmers burning to clear brush of the treetops stripped from logging operations.  Local experience was that these fires would burn themselves out or be extinguished by the early snows expected in the region by mid-October.  The night before the big fire survivors reported seeing several small blazes on surrounding hills. 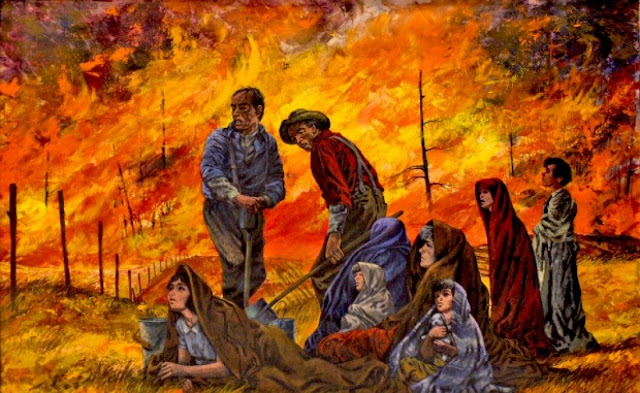 A family seeks refuge from the Peshtigo fire in cleared farm field.

By the evening of the October 8 high winds were merging the fires, which began to move on broad fronts burning, among other things, the telegraph lines that Peshtigo and another dozen small towns could have used to signal for help.  By the time a wall of flame erupted over a ridge near town, the fire was roaring with unprecedented fury, moving at high speed directly on the town.  Residents had little time to gather possessions and attempt to flee before the town itself was engulfed.  By then the fire was traveling from treetop to treetop creating its own cyclonic winds, including at least one “tornado of fire” witnessed by several survivors.  The firestorm fed itself creating internal winds of up to 80 miles an hour ripping the roofs off houses, blowing over barns, uprooting trees, and tossing a 1,000 lb. wagon like tumbleweed.

Before it was over the fire burned over 1.2 million acres.  Winds carried embers to both sides of the Peshtigo River and across Green Bay where it burned the Door Peninsula from Dykesville almost to Sturgeon Bay to the north.  Sixteen towns were totally destroyed.  In Peshtigo alone, 800 lives were lost.  The total death toll will never be known exactly because town records across the region were destroyed and whole families wiped out.   In addition, hundreds of lumber workers, isolated small farmers, hunters, and trappers were in the woods with no way to determine their fate.  Best estimates of the death toll range from 1,200 to over 2,000. 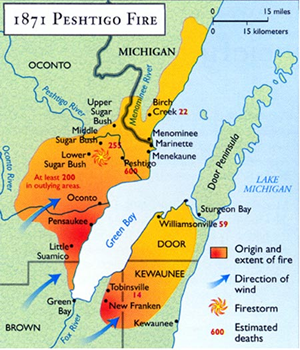 High winds carried burning embers from the Peshtigo file all the way across Green Bay.

Word of the Peshtigo fire and the other disasters in the north was overwhelmed by news from Chicago.  To this day the largest loss of life by fire in American history remains little known outside of Wisconsin and among fire historians.

During World War II, however, the Army Air Force was aware of the historic firestorm.  It commissioned American and British scientists to study it to find ways of duplicating the firestorm through incendiary bombing.  The destruction of Dresden, Germany by fire storm, which took more lives than either of the atomic bombs used against Japan, was partly the result of that research. 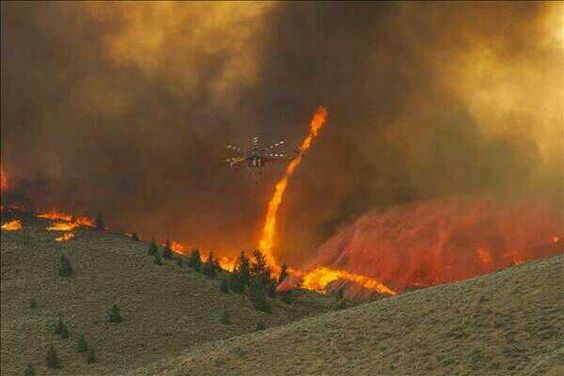 Firenados like this were seen with the firestorms around Peshtigo and other Upper Midwest communities.  These reports were long thought to be exaggerations until firenados  were observed in Western wildfires and in Australia.

Today a museum in Peshtigo commemorates the fire.  It has very few relics of the town—almost everything burned up except for one house freshly built of green lumber.  Among the few artifacts of the fire are the Tabernacle from the Catholic Church which was saved by survivor Father Peter Pernin by submersing it in the river, a melted can of peas, some fused ceramics, a charred piece of lumber from the surviving house, and artifacts recently dug up, including a Bible discovered opened to Psalms.

This year Peshtigo commemorated the 150th anniversary at the annual Peshtigo Historical Days held over three days, September 24, 25, and 26 with a $50-dinner show with stories from the great Peshtigo fire, reenactors at a local park, parade, family friendly activities, and ironically fireworks.

Despite the fact that conditions across the region were perfect for widespread fire, that many eyewitness accounts of numerous fires burning for days around the town, and that the origin of the Chicago fire can be traced to the O’Leary barn, speculation that the fires had some common origin has gone on for years.  As early as 1883 there was speculation that the fires across the region might have been caused by impact of debris from the Comet Biela, which was observed to break up in its 1854 appearance.  The intersection of the projected route of the comet’s return in November 1872 was marked by an intense meteor shower.

The 1985 book Mrs. O’Leary’s Comet: Cosmic Causes of the Great Chicago Fire by Mel Waskin revived that theory.  In 2007 Robert M. Wood published a scholarly article in the Journal of the American Institute of Aeronautics and Astronautics which calculated that gravitational pull of Jupiter when debris of the comet crossed its path may have accelerated the arrival of that debris by as much as a year.  Observations of “fire balls” falling from the sky in both the Peshtigo and Chicago fires might have been burning gasses from the dead comet.

Other experts remain skeptical of this theory. Many dismiss it as the kind of pseudo-science peddled on the History Channel.  The skeptics point out that the extreme and prolonged drought and gale force winds over a wide area is a sufficient explanation. Their argument has been fortified by the scores of independently started but near simultaneous fires that swept the Western United States and Canada in 2017 in very similar conditions.

Chicago marks the occasion in several ways but particularly with a special up-dated exhibit at the Chicago History Museum and a Magic Lantern show with narration and music presented tonight in front of the Newberry Library.

One thing we know for sure.  Mrs. O’Leary’s innocent cow had a better press agent than the victims of the Peshtigo inferno.
Posted by Patrick Murfin at 6:43 AM