The Johnny Bright Incident Was An Indelible Stain on College Football 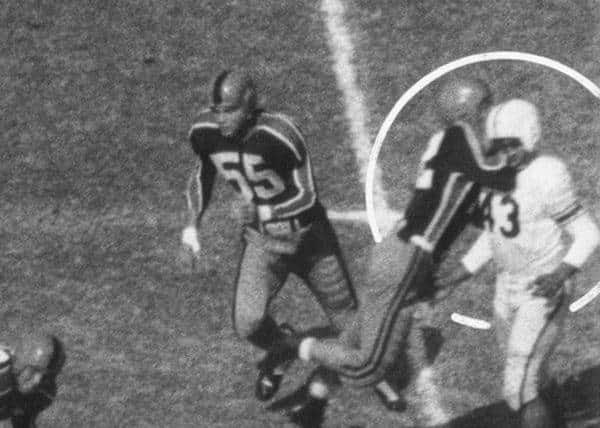 An isolation and blow-up from a series of photographs in the Des Moines Register clearly show Johnny Bright  being smashed in the face after handing off the ball.  The brutal late his was the third time Bright was knocked unconscious in the first quarter of a 1951 Drake vs. Oklahoma A&M football game.

It was the most brutal and flagrant on-field racist attack in NCAA college football history.  The irrefutable evidence was splashed on front pages across the country.  The leading contender for the 1951 Heisman Trophy was severely injured and knocked out of a game causing his undefeated team to lose its only game of the season.  Yet no action was taken against the player who assaulted Johnny Bright, the coach who ordered the hit and drilled the assault in practice, or the administration which apparently approved, defended, and covered up the attack.  In fact, for decade after decade the University denied any wrongdoing and refused to apologize to the wounded player or the team they cheated.  It was not until September 28, 2005 that an Oklahoma State University President acknowledged wrongdoing in a letter to the President Drake University.  The apology came almost 54 years after the assault and 22 years after the victim’s death.

Johnny Bright was born to a working class African American family on June 11, 1930 in Fort Wayne, Indiana.  He was raised with three brothers and a sister by a single mother.  At the city’s Central High School, he was an excellent student and lettered in football, basketball, and track and field, leading his football team to a city title in 1945, and helped the basketball team to two state tournament Final Four appearances.  He also played local league softball and was a successful amateur boxer.

Bright was one of the most heavily recruited high school athletes in the nation when he graduated in 1947.  He accepted a scholarship at Big Ten powerhouse Michigan State University (MSU.)  It was not a good fit.  As a freshman he was unhappy with the direction of the football program and disappointed that coaches seemed to actively discourage “wasting time” on academics instead of concentrating on football.

Bright dropped out of MSU and accepted a track and field scholarship at Drake University in Des Moines, Iowa a smaller but prestigious university.  Bright’s scholarship allowed him to try out for the football and basketball squads, but because he was a transfer he was redshirted for football in his freshman year.  During his college career he lettered in all three sports.

Drake competed in the Missouri Valley Conference (MVC), then considered a second tier college conference.  Within the conference Drake was a traditional powerhouse.  Once he became eligible for varsity play in his sophomore year, Bright quickly helped the program step up to a whole new level.  In 1949, his sophomore year he rushed for 975 yards and threw for another 975 to lead the nation in total offense.   The Drake Bulldogs finished their season at 6–2–1.  In Bright’s junior year as a halfback/quarterback he rushed for 1,232 yards and passed for 1,168 yards, setting an NCAA record of 2,400 yards total offense and again led the team to a 6–2–1 record.

Early in his freshman year Bright became the first Black player to compete against MVC rival Oklahoma A&M at Lewis Field in Stillwater.  A&M, which would later become Oklahoma State University, had just, extremely reluctantly, become officially integrated that year.   Bright, then unknown, had competed without incident or controversy and led his team to a victory over the Aggies.  In his sophomore year Drake hosted the contest between the two teams and once again Bright had romped over the Oklahoma team. 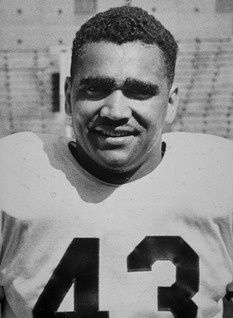 In his senior year Johnny Bright was leading all college players in total yardage and both passing and rushing as a half back/quarter back for Drake University and was the odds on favorite to win the Heisman Trophy.

Before the beginning of the 1951 season and Bright’s senior year, he had become a genuine national star.  He was rated by sports writers as the hands down favorite to win the Heisman Trophy.  As his team began to roll up victory after victory, Bright became an open target at A&M.  The student newspaper, The Daily O’Collegian, and the Stillwater News Press, reported that Bright was a marked man, and several A&M students were openly bragging that Bright “would not be around at the end of the game.”  A&M Coach Jennings B. Whitworth, an Arkansas native, exhorted his team repeatedly during practices to “get that Nigger!”  He ran special drills featuring his toughest defenseman, tackle Wilbanks Smith practicing how to do just that.

On the day of the game, Bright led a 5-0 team and was the nation’s leading collegiate scorer.  But in the first ten minutes of the A&M game bright was knocked unconscious three times by Smith.  The third time, after Bright had handed the ball off to Drake fullback Gene Macomber, and well behind the play, Smith smashed into his face with his elbow, breaking Bright’s jaw.  Despite the pain, Bright was able to stay in the game long enough to complete a 61-yard touchdown pass to Drake halfback Jim Pilkington a few plays later.  But he was unable to play after the first quarter.  For the first time in his college career Bright had less than 100 yards total offense.  Without their star player, the Bulldogs fell to the Aggies 27-10.

No penalty was called on Smith for the flagrantly late hit.  After the brouhaha over the attack reached national proportions the MVC refused to take any action.  A&M President Oliver Willham denied anything happened even after evidence of the incident was published nationwide.  Drake withdrew from the Conference in protest.

The evidence that caught the nation’s attention was a series of photographs taken by Des Moines Register cameramen John Robinson and Don Ultang.  They had picked up on rumors sweeping the stadium that day that Bright would be targeted.  They set up their cameras specifically to follow him in play.  In six shots they captured the whole sequence of the play from Bright’s hand-off to Smith’s elbow smashing into his face which ran on the front page of the next day’s paper.  The photos were so dramatic that they also ended up on the cover of Life magazine.  Robinson and Ultang won the Pulitzer Prize for their effort.

The Register followed up with an in-depth investigation by reporter Bob Spiegel who interviewed many spectators at the game who confirmed the threats circulating and quoting comments from a A&M player on the bench which confirmed that the attack had been planned and drilled.

The NCAA investigated the incident but took no action against Smith or A&M, much to Drake’s outrage.  They did tweak rules about late hits and illegal blocking and established a new rule requiring ball handling players wear helmets with face guards. 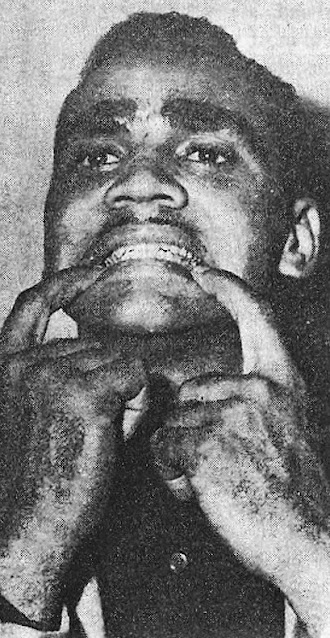 In a press photo Bright showed his jaw wired shut.

After the game Bright’s jaw was wired shut.  He most likely also suffered a concussion, although those kinds of head injuries were not well understood at the time.  He was only able to see limited action in the team’s remaining three games, but he earned 70 percent of the yards Drake gained and scored 70 percent of the Bulldogs’ points over the whole season anyway.  The limited action in the last games probably cost Bright the Heisman.  He finished fifth in voting anyway.

Bright was taken fifth in the NFL Draft, picked by the Philadelphia Eagles.  Bright would have been the first Black on the team.  He was concerned that he would not be well received by the many Southerners on the team.  He was not eager, he told people later, to be “football’s Jackie Robinson.”

Instead after playing in the post-season East-West Shrine Game and the Hula Bowl, Bright unexpectedly accepted an offer from the Calgary Stampeders of the Western Interprovincial Football Union, the precursor to the West Division of the Canadian Football League, leading the Stampeders and the WIFU in rushing with 815 yards his rookie season.  In his third season in Canada, Bright was traded to the Edmonton Eskimos.  He would go on to win three Gray’s Cup Championships with the team, be elected CFL’s Most Outstanding Player in 1959, and establish numerous offensive records in a 13 year long pro career.  When he retired in 1964 he was the League’s all-time leading rusher with, had five consecutive 1,000 yard seasons, and led the CFL in rushing four times.  He is a member of the Canadian Football Hall of Fame, the College Football Hall of Fame, the Missouri Valley Conference Hall of Fame, the Edmonton Eskimos Wall of Honour, the Alberta Sports Hall of Fame, and the Des Moines Register Iowa Sports Hall of Fame. 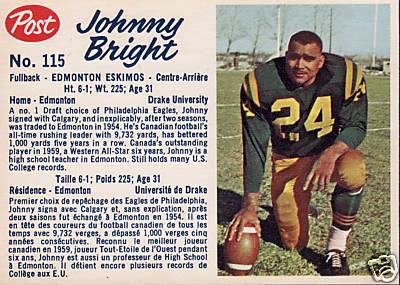 After college Bright declined to be the "football Jackie Robinson" in the NFL and instead  played in Canada where he became the Canadian Football League's record setting Most Outstanding Player and a Canadian Football Hall of Fame honoree.

But the football honors were only part of the remarkable legacy of Johnny Bright.

Like most Canadian football players of the era, Bright held down a full time off-season job.  Using his Drake Bachelor of Science degree, Bright became an Edmonton school teacher.  Over the years he turned down several offers from the NFL because it would have meant giving up teaching.  Bright eventually became principal of D.S. Mackenzie and Hillcrest Junior High Schools in Edmonton.  In profound gratitude for the opportunities Canada provided him, Bright became a citizen in 1962.

Bright was frequently asked about what had become known as the Johnny Bright Incident.  He expressed surprisingly little bitterness toward Wilbanks Smith.  While acknowledging that there was “no way it couldn’t have been racially motivated…What I like about the whole deal now, and what I’m smug enough to say, is that getting a broken jaw has somehow made college athletics better. It made the NCAA take a hard look and clean up some things that were bad.”

Bright died of a massive heart attack on December 14, 1983 at the age of only 53, at the University of Alberta Hospital in Edmonton, while undergoing surgery to correct a knee injury suffered during his football career. He was survived by his wife and four children. 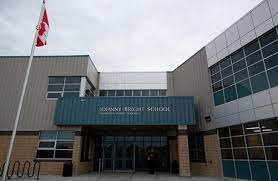 Bright's other legacy as an outstanding and beloved teacher and principal was honored by this Edmonton school.

In 2006, the football field at Drake Stadium, in Des Moines was named in Bright’s honor.  Four years later his second career was recognized with the opening of Johnny Bright School, a kindergarten through grade 9 facility in Edmonton.

And what of the villains?  There seems to be some kind of karma and rough justice in the case of Coach Whitworth.  He left Oklahoma A&M after four years as head coach in 1954 with a losing 22–27–1 record. Then he went on to coach his alma mater, the University of Alabama from 1955 to 1957 where he posted miserable a 4–24–2 record that included a 14-game losing streak from 1955 to 1956.  He was fired and replaced by the legendary Bear Bryant.  Whitworth could only get an assistant job at Georgia, where he worked for one year.  He died in 1960 at the age of 52.

Wilbanks Smith was said to have had a successful career in engineering and to have been devoted to community service.  He was said to have taken “personal responsibility for the incident” mainly to deflect criticism of his coach, team, and the University but he never expressed any regret at injuring Bright or made any attempt to contact him or make amends.

With typical grace, Bright shrugged it off, saying he felt “null and void” about Smith, but adding “The thing has been a great influence on my life. My total philosophy of life now is that, whatever a person’s bias and limitation, they deserve respect. Everyone’s entitled to their own beliefs.”

Posted by Patrick Murfin at 5:34 AM