The Girl Who Became the First Political Image Consultant 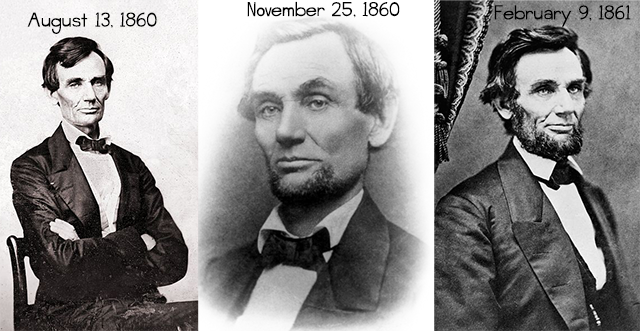 The evolution of Lincoln's beard.  The clean shaven Lincoln of the campaign was, as Grace Bedell observed, gaunt and homely.  His first photo with whiskers taken weeks after the election, and the full Lincoln we have come to know as he neared inauguration.

All right everybody let’s all gather ‘round and sing a rousing happy birthday to Abe Lincoln’s Beard.  On October 15, 1860 an 11 year old girl wrote the famous letter that got Lincoln to put away his razor making this the anniversary of the most famous whiskers since Jesus. 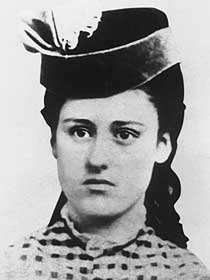 Grace Bedell as an attractive young woman in the early 1870's.  The story of her letter to a homely candidate had already entered Lincoln lore and made her famous.

Grace Bedell was the daughter of a supporter from Westfield, a western New York village on the shores of Lake Erie now best known as the home of the Welch’s Grape empire.  Grace wasn’t too impressed by a picture of the candidate that her father brought home.  She wrote:

My father has just home from the fair and brought home your picture and Mr. Hamlin’s. I am a little girl only 11 years old, but want you should be President of the United States very much so I hope you won’t think me very bold to write to such a great man as you are. Have you any little girls about as large as I am if so give them my love and tell her to write to me if you cannot answer this letter. I have got 4 brother's and part of them will vote for you any way and if you let your whiskers grow I will try and get the rest of them to vote for you would look a great deal better for your face is so thin. All the ladies like whiskers and they would tease their husband’s to vote for you and then you would be President. My father is going to vote for you and if I was a man I would vote for you too but I will try to get every one to vote for you that I can I think that rail fence around your picture makes it look very pretty I have got a little baby sister she is nine weeks old and is just as cunning as can be. When you direct your letter direct to Grace Bedell Westfield Chatauque County New York

When the presidential candidate received the letter he was in a quandary.  In the whole history of the Republic there had never been a President with a beard.  Martin Van Buren and his impressive muttonchops had come close, but then he had been run out of Washington after one term for being a dandy and a fop.  And if there is one thing a self-proclaimed Man of the People cannot afford to be it is a fop.  And he had to remember that it was the very first log cabin candidate, William Henry Harrison—who had not really been born in a log cabin at all—that sent the Red Fox of Kinderhook packing back to Albany.

On the other hand, facial hair was becoming all the rage back East, and not just the sign of an ignorant backwoodsman who couldn’t afford a razor.

But if he grew one, what sort should it be?  A stylish Imperial like Louis Napoleon and his old client the President of the Illinois Central Railroad George McClellan? Neck whiskers like Horace Greeley?  The full patriarchal bush a la John Brown? No, none of those would do.  And Lincoln wasn’t even sure he could raise a decent beard at all.  Still, the girl had a point.  He wrote her back:

Your very agreeable letter of the 15th is received—I regret the necessity of saying I have no daughters—I have three sons—one seventeen, one nine, and one seven years of age—They, with their mother, constitute my whole family—As to the whiskers, having never worn any, do you not think people would call it a piece of silly affection if I were to begin it now?

Despite the non-committal nature of the letter, Lincoln decided to give growing whiskers a try.  By the time he left Springfield for his train trip to Washington, he was sprouting a semi-respectable stubble. 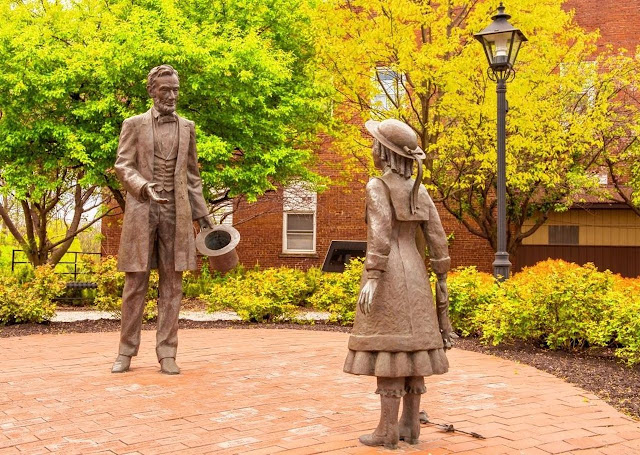 The train made a whistle stop in Westfield.  As was his custom the President-elect stepped to the rear platform to address the crowd.  He asked if Grace Bedell was present and called her forward.  He gave her a chaste kiss on the cheek and told the crowd that she was the inspiration for his new look.

Lincoln and his beard were photographed many times over the next few years.  He settled on a middle-ground kind of beard—a strip of hair that hugged his jaw and chin but still required the attention of a razor to his upper lip, cheeks, and neck.  It aged with him.  Sometimes it was a little longer, sometimes he let the fuzz on his cheeks fill in.  At least once he shaved a little between his sideburns and chin.

Grace was right, by the way.  He did look better with it.