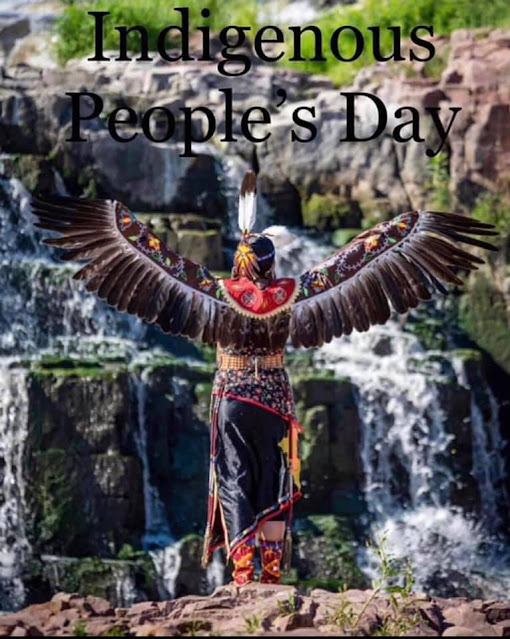 Today is celebrated as Indigenous People’s Day in most of the Americas and in other parts of the world.  I first blogged the still spreading and growing recognition that has its official origins in the United Nations Declaration of the Rights of Indigenous Peoples in 2007.  But in the United States Native Americans have been staging actions, protests, and alternative events to a Federal Holiday on the Second Monday in October for decades.

That’s right, your calendar probably marked today as Columbus Day in recognition of Cristoforo Colombo/Cristóbal Colón/Christopher Columbus.  I’ve blogged about him, too, and his alleged discovery—alleged because he didn’t know where he was going, “found” what was never lost, claimed what wasn’t his to take, and didn’t even know where the hell he was.  When just about everyone else in Europe had figured out that he never reached the East Indies or Asia he continued to lie about it. 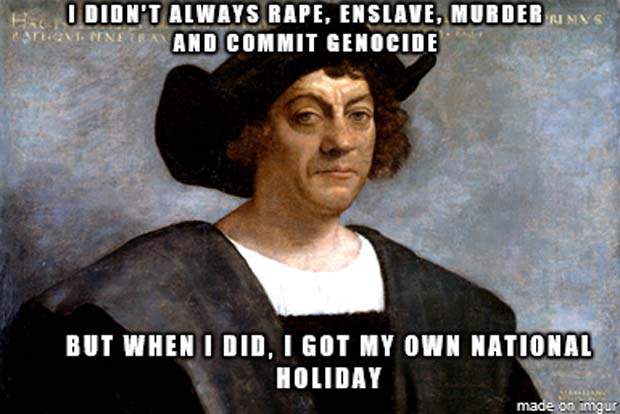 None-the-less the mercenary mariner was rewarded with fancy titles—Admiral of the Ocean Sea for one—and made Viceroy over half the damned world.  And he screwed that up by being so brutal that he virtually wiped out the once numerous Carib peoples who inhabited the islands under his immediate effective sway.  He also bullied and oppressed potential rivals—would be Conquistadors of even richer realms on the mainland, many of whom had better connections at Court than a Genoan hireling.  He was stripped of his titles, wealth confiscated, and shipped to Spain in disgrace and chains.

Not much to celebrate there.

Yet despite the fact that Columbus never set foot in North America—the closest he got was wandering around portions of Central America after being abandoned by mutineers and quite typically lost—he somehow became an iconic folk figure and symbol of the New World to the English and overwhelming Protestant colonists hugging to the Atlantic shore far to the north of any of his voyages.

Amerigo Vespucci, another Italian sailor with even less to justify it, swooped in and got his name attached to two continents just because he knew the right cartographer.  But Columbia was a popular alternative name for Western Hemisphere lands and some Patriots wanted to officially adopt it for their new country.  Think of the song, once almost an unofficial national anthem, Columbia the Gem of the Ocean and other evidence.  When Thomas Jefferson’s pal Joel Barlow, a diplomat and literary dabbler, wanted to create a national epic poem he churned out The Columbiad, a turgid contemplation of Columbus and the new world.

Around the 400th anniversary of the alleged discovery in 1892 interest in him was elevated by events around the world, but particularly at Chicago’s World Columbian Exposition.  American Catholics—a struggling and despised minority—looked to the notoriously pious Columbus who had slaughtered all of those natives in the guise of converting them to the One True Church to establish their bona fides as worthy Americans.  Thus, the Knights of Columbus became the Catholic answer to the WASP Masonic Lodges.

But it was urban Italians, among the last European immigrants to become White, in the big cities of the East Coast and Midwest who made Columbus Day and lavish annual parades and answer to the earlier immigrants—especially the Irish—in their struggle for a fat slice of the patronage and privilege pie of the Democratic Party machines. 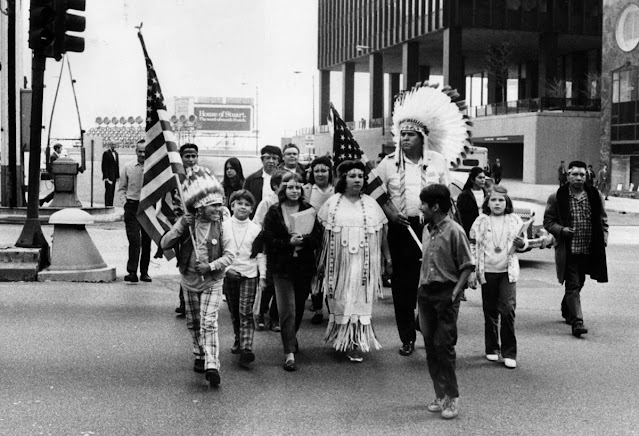 In the early 1970's even before the United Nations declaration Native Americans from the American Indian Center in Uptown marched through the Chicago Loop to protest when their request to participate in the annual Columbus Day Parade was curtly turned down.  Protests, counter demonstrations, and marches grew year by year.

As protests against honoring a figure who represented centuries of land theft, colonial subjugation, genocide, and cultural annihilation has grown, support for the holiday has waned.  City after City and several States have officially dumped Columbus Day, and most have adopted some form on Indigenous Peoples Day in its stead.  Support had dwindled to indignant Italian civic organizations and the kind of cultural fuddy-duddies who cannot stomach change of any kind.

More recently, however, a sub-set of the Alt-Right and neo-fascist movements who claim to honor and preserve European culture and secure its dominance in American society, have begun to make war on the anti-Columbus Day warriors, especially attacking Native Americans and a “cultural elite of race traitors.”

This year President Joe Biden proclaimed the second Monday in October as Federal Indigenous Peoples Day.  That did not, however, erase Columbus Day which was created and recognized by Congress.  The two celebrations are like bitterly divorced spouses forced to continue to live together in the same house.

Anyway, all of that is more than I intended to write about Columbus.  By now you know the story.  So I celebrate Indigenous Peoples Day.  I hope you do too.

In honor of the occasion, I am revisiting a verse I wrote in 2016 just during the most important Native American resistance in decades—the camps to block the Dakota Access Pipeline which threatened to pollute the Missouri River and defile traditional Sioux lands.  May their long and valiant prayerful witness be inscribed in the sacred winter count and sung of around the campfires for all of the generations they were trying to protect. 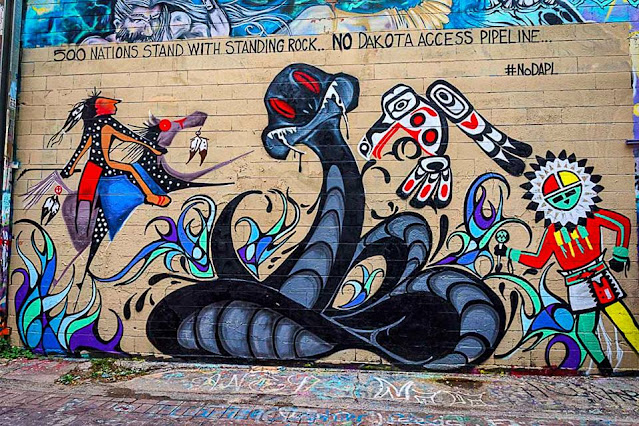 Tonto Will Not Ride into Town for You

Tonto will not ride into town for you, Kemosabe,

and be beat to pulp by the bad guys

on your fool’s errand.

Pocahontas will not throw her nubile, naked body

over your blonde locks

to save you from her Daddy’s war club.

Squanto will not show you that neat trick

with the fish heads and maize

and will watch you starve on rocky shores.

Chingachgook will save his son and lineage

and let you and your White women

fall at Huron hands and be damned.

Sacajawea and her babe will not show you the way

or introduce you to her people,

and leave you lost and doomed in the Shining Mountains.

nor Geronimo pose for pictures for a dollar

in fetid Florida far from home.

They are on strike form your folklore and fantasy,

have gathered with the spirits of all the ancestors

to dance on the holy ground, the rolling prairie

where the buffalo were as plentiful

as the worn smooth stones of the Mnišoše,

the mighty river that flows forever.

They are called by all the nations from the four corners

of the turtle back earth who have gathered here,

to kill the Black Snake, save the sacred water,

the soil where the bones of ancestors rest,

and the endless sky where eagle, Thunderbird, and Raven turn.

Posted by Patrick Murfin at 6:12 AM