From the President’s Palace to the White House 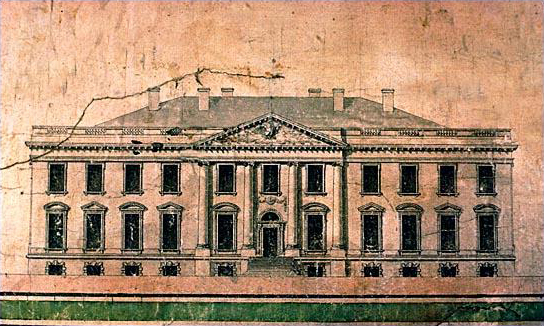 Architect James Hoban's elevation sketch of the President's Palace after revisions to the original plan were ordered by George Washington.

On October 13, 1792 the cornerstone of the President’s Palace was laid in the virtual wilderness of the Federal District designated as the future Capitol of the infant United States.  President George Washington was in the temporary capitol of Philadelphia and did not dignify the occasion, as he had when the cornerstone of the Capitol Building was laid by presiding in his Apron for a full Masonic ceremony.  Indeed there was no ceremony at all.

With the cornerstone in place the workforce of mostly slaves hired from their Virginia masters, Black freemen from the Georgetown area, and a handful of immigrant artisans began digging the foundations.  Few American citizens with full rights were ever employed on the project which took eight years to complete at a cost of $232,372—$ 2.8 million in 2007 dollars.  To save money, common brick was used to line the exterior walls which were then faced by sandstone blocks.  The stone masonry was largely the work of Scottish craftsmen employed by the architect, Irishman James Hoban. 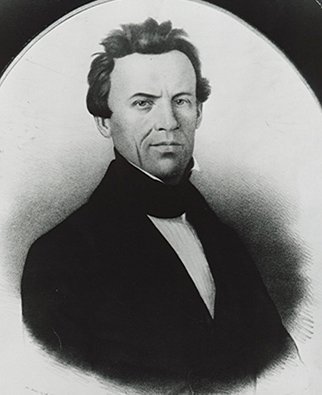 Although some interior work and details remained unfinished, the house was deemed habitable when the Capitol was transferred to Washington City.  President John Adams and his dismayed wife Abigail officially moved in on November 1, 1800, just days before the election that would send him packing the next year and leave the building to his archrival, Thomas Jefferson.

Jefferson, an amateur architect of some accomplishment, may have had mixed feeling about the building himself.  He had anonymously submitted one of nine designs competing for final selection for the building.  He was disappointed when Washington selected Hoban’s design.

Of course, that competition would not have been possible without the delicate political maneuvering that located the future capitol city on the banks of the Potomac instead of the bustling commercial centers of New York or Philadelphia.

It was also a tribute to the enormous prestige and influence of the first President.  The authority to establish a federal capital was provided in Article I, Section Eight of the Constitution, which designated a “District (not exceeding ten miles square) as may, by cession of particular states, and the acceptance of Congress, become the seat of the government of the United States.”

In what later became known as the Compromise of 1790, James Madison, Alexander Hamilton, and Jefferson with the benign approval of Washington, came to an agreement that the federal government would assume war debt carried by the states, on the condition that the new national capital would be in the South.  The precise location, personally selected by Washington, was designated in the Residence Act on July 19, 1790. 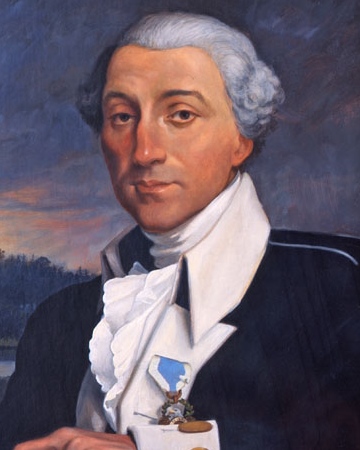 Pierre Charles L’Enfant, the French engineer who laid out the city plan for Washington, envisioned a grand European style palace on the opposite end of a grand boulevard from the Capitol.  Republican virtue demanded a much simpler residence.

Washington commissioned French military engineer Pierre Charles L’Enfant to lay out the future city.  He envisioned the spokes-of-a-wheel plan with broad ceremonial avenues and the Capitol Building and President’s house on opposite ends of one such grand boulevard.

At the site selected by the President, L’Enfant sketched in the footprint of a truly grand palace on the European scale for the President.  His building would have been five times larger than the one that was eventually built.  Those plans quickly proved to be impractical—both too expensive and too difficult to acquire the necessary amount of building stone.  It was also politically unacceptable to those who demanded that the new government be housed in edifices of sensible republican simplicity.

As Secretary of State, Jefferson advertised the architectural competition which he entered anonymously.  The final selection was to be made by the official commission overseeing construction of public buildings in the new capital, but in fact it was Washington who personally selected the design submitted by Hoban.

Hoban was one of the few—some say the only—trained architects in the county.  He had emigrated from Ireland after the Revolution and first established a practice in Philadelphia.  But after moving to North Carolina, he began to get commissions for important public buildings, like the Charleston County Courthouse which Washington saw and admired on his presidential tour of the Southern states.  He personally invited Hoban to submit a design to the contest. 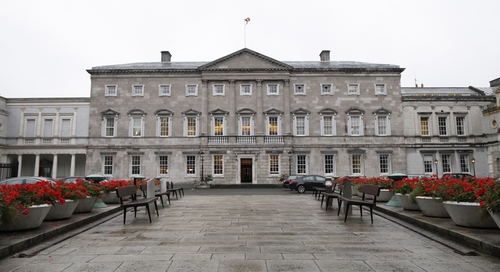 Leinster House, now seat of the government of the Republic of Ireland in Dublin was an inspiration for Hoban's design.

For inspiration, Hoban drew on the Georgian country houses of the Anglo-Irish aristocracy and particularly on Leinster House, the Dublin seat of the Duke of Leinster and destined to become the home of the Irish Parliament in the 20th Century.  Despite winning the competition, Washington demanded substantial changes from his architect.  He ordered the elevation changed from three to two floors, but that the dimensions of the building be expanded by 30% and include a large ceremonial space for balls and public receptions—the commodious East Room. Hoban’s surviving drawings reflect these changes—the originals submitted for the competition having been lost.

Upon completion the porous sandstone was sealed with a whitewash consisting of a mixture of lime, rice glue, casein, and lead.  This belies the popular story that the building was only painted white to cover the scorch and smoke damage from the burning of Washington by the British during the War of 1812.  Informal references to the building as the White House have been found as early as 1811.  It is possible that the original whitewash was fading or dirtied by the time the British put a torch to the building.  At any rate, the fresh white paint applied during the restoration undoubtedly contributed to the informal use of the name. 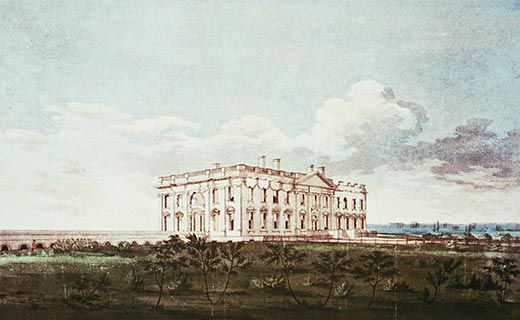 A painting of the President's House in 1814 before it was burned by the British in the War of 1812.  Note its already white color and its relative isolation in the still rustic village of Washington.

Jefferson rejected the name Presidential Palace preferred by Adams as too aristocratic.  Under his administration it was commonly simply called the President’s House and for the next century the house was officially named the Executive Mansion.  Theodore Roosevelt changed the official designation to the White House in 1901.

The building has undergone many modifications over the years, starting with the colonnades that Jefferson had constructed out from each side of the house to screen the stables, greenhouses, and domestic outbuildings—including slave quarters—from view from Pennsylvania Avenue.  The south portico was constructed in 1824 during the James Monroe administration and the north portico was built six years later.  Both followed plans originally drawn by Hoban. 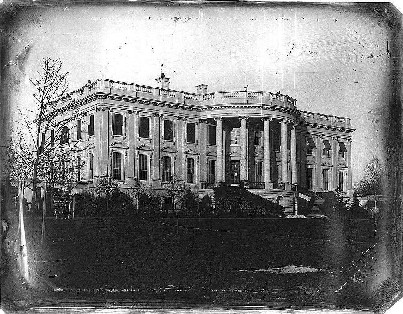 The earliest known photo of the Executive Mansion, a daguerreotype taken in 1847.

In 1881 Chester Arthur ordered a significant remodel of the building’s interior.  Theodore Roosevelt added the West Wing, which his successor William Howard Taft expanded, and the Oval Office was added.  Herbert Hoover added a second floor to the West Wing following a fire there and added extensive basement office space for an expanding staff. Franklin Roosevelt moved the Oval Office to its present location by the Rose Garden.  Harry Truman added the still controversial balcony to the South Portico. 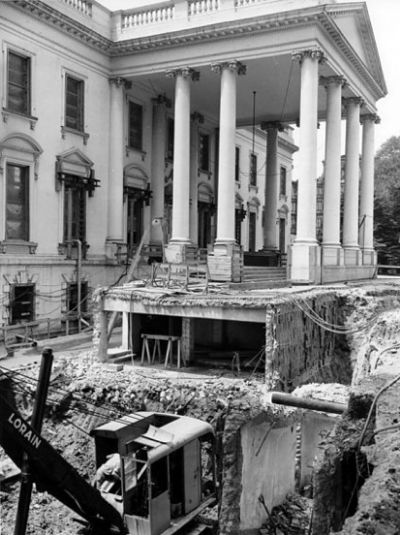 Work during the almost total reconstruction of the White House during the Truman administration.

During Truman’s administration the building was found in danger of collapse from neglect.  The President moved to near-by Blair House for two years as the interior was gutted and reconstructed.  In 1961 First Lady Jacqueline Kennedy began her interior restoration of the building to its French Empire inspired appearance during the later Madison and Monroe years.

The White House now routinely undergoes modifications with the coming of each administration.  President Barack Obama ordered the instillation of solar panels to replace those put up by Jimmy Carter and taken down by Ronald Regan.  His wife Michelle built extensive vegetable gardens on the grounds which had not been used for agricultural purposes since sheep were kept browsing the lawn.  Of course, among the former Resident first fits of spite and revenge was to remove the solar panels and obliterate the gardens.  He also trashed up the interior with his beloved gaudy gold bling wherever he could, and Melania famously maimed the Rose Garden.

Joe Biden has so far been too busy undoing the Cheeto’s disastrous policies and trying to get his ambitious agenda through Congress to spend much time re-doing the official offices and dwellings beyond hanging and displaying art and making the private residence rooms more modest and comfortable. 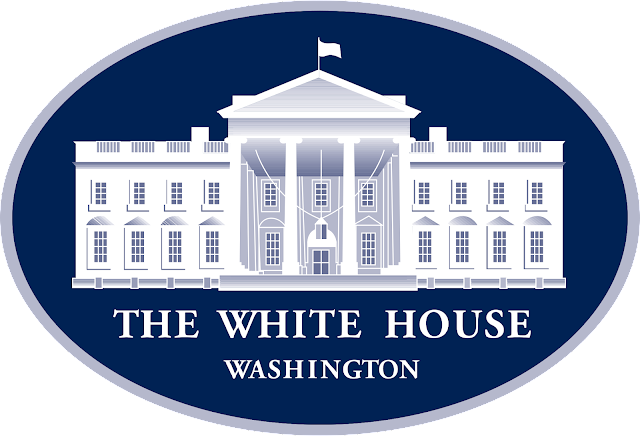 The official logo of the White House features the North Portico which faces Lafayette  Square.

There is continual work expanding or improving the vast underground complex that now extends below much of the White House lawn and houses offices, communications centers, and, reportedly, a hardened bunker capable of withstanding a nuclear attack.

But the core of the building remains as Hoban and Washington imagined it more than two hundred years ago.

Posted by Patrick Murfin at 6:13 AM