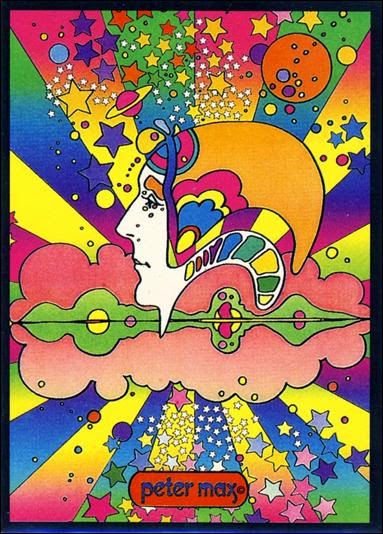 Peter Max became famous for his bright colorful psychedelic posters in the 1960s.

If you are a certain age and you put on some vintage vinyl and close your eyes to visualize the Sixties it is highly likely that an image that will pop into your head like an acid flashback is a Peter Max poster with all of its vivid colors, bold lines, celestial imagery, and general wistfulness.  Even if you know better, you can’t help yourself.  No artist of the era—not even the relentlessly self-promoting Andy Warhol—was more ubiquitous and iconic.

Yet despite enormous technical mastery and inventiveness, Max is an artist many love to hate—even when they can’t get his images out of their heads.  Likely because he became a brand and an empire, supposedly whoring himself to capitalism and advertising while also merchandising his images in posters, books, coffee mugs, clothing and textiles, wallpaper, and almost every conceivable consumer product.  In the process, which continues to this day, Max may have become the richest artist who ever lived—a single-handed Wal-Mart colossus of art.

That is so far in conflict with the peace/love/joy message of his Sixties work that it creates a kind of cognitive dissonance that we can hardly deal with.

Peter Max Finkelstein was born on October 19, 1937 to an artistic and secular Jewish family in Berlin, Germany.  It was a notably inconvenient time to be Jewish in Germany.  When Peter was less than a year old the family managed to flee the country, somehow finding themselves in Shanghai, China where they lived for the next ten years through the Japanese occupation and World War II. 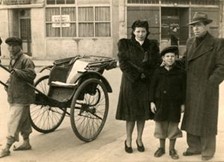 Young Peter Max Finkelstein with his parents in Shanghai during World War II.


The family seemed to live a charmed life in a pagoda-style house sandwiched in between Buddhist monastery and a Sikh temple.  On the streets outside he could watch colorful Chinese New Year and other parades with their dancing dragons and lions.  His mother, a former fashion designer, littered the house with art supplies of all types and encouraged her son to create whatever inspired him promising to clean up any mess he made.  Or so the story goes.

By the time the war ended and Peter was old enough, he haunted the markets of the town for American comic books, listened to jazz on the radio, and took in the latest Hollywood movies at a cinema operated by a family friend.

In 1948 the family immigrated to Israel where they settled in Haifa just in time for another war.  A war from which the family, once again emerged unscathed.  There he took his first art lessons from an Austrian expressionist, Professor Honik who introduced the boy to Fauvism and the paintings and drawings of Henri Matisse, Maurice Vlaminck, Max Beckmann, and Alexi Jawlensky.  After visiting the observatory on Mt. Carmel, Peter also took an interest in astronomy and even enrolled in night classes to study the stars at Technion Institute

In the early Fifties the family moved again to Paris where they lived for nearly a year.  The teenager was exposed to and fell under the thrall of Classical and realist art he discovered at the Louvre.  He even enrolled in classes at the museum school.

But before he could settle down in France, the family migrated for a final time to the Bensonhurst neighborhood of Brooklyn, New York in 1953.  There he enrolled at Lafayette High School.  The bustling City of New York itself with its teeming streets, towering art deco skyscrapers, chic fashion, sleek automobiles, movie palaces, and art everywhere was an even more important education.

After high school Peter began his formal art education at the Art Students League in Manhattan under the tutelage of noted realist Frank Reilly.  He was exceptionally diligent in mastering all the techniques of representational drawing and painting.  In addition to his lessons, he spent hour every weekend in museums carefully studying the work and technique of the masters.

Upon graduation Peter Finkelstein was using the name Peter Max as he attempted to start a career as a fine artist.  His devotion to realism and representational art, however, made it difficult to make headway in the city that was replacing Paris as the center of the art world on the strength of the abstract expressionist and other non-representational forms of modern art.  He was struggling to find a gallery that would even show his work until he had a chance encounter with an art director for a record company who commissioned him to create a cover for an album by bluesman Meade Lux Lewis.  The moody and evocative cover painting ended up winning the annual Society of Illustrators award.

Max had stumbled from the world fine art to commercial art.  He was soon very successful in his new endeavor.  In 1962, Max and Tom Daly started The Daly & Max Studio, a small commercial arts studio known and were later joined by friend and mentor Don Rubbo.  The trio collaborated on book design and advertising.  They specialized in a form of collage that blended vintage photographic images with painted elements.  Awards and commissions began to roll in as the three worked as a group on books and advertising for which they received industry recognition.

By the mid-sixties in response to the psychedelic movement, Max was using kaleidoscopic techniques with his collages and was adding bolder color.  He also returned to his old interest in astronomy and began to incorporate stars, moons, and planets in his designs to lend them an other-worldly quality.  This celestial period is what Max is still best known for and which he continued to mine well into the ‘70’s.

Max created scores of images for use in TV and print ads, in-store displays, billboards, and giveaways for 7-Up's successful Un-cola campaign.


Advertisers loved it.   Illustrations for 7Up’s Un-cola campaign were a huge hit and caused sales of the soft drink to jump dramatically.  Many others scrambled to commission Max to work on their own campaigns.  Max soon became aware that his commercial images were being pinned to the walls of college dormitories and hippy crash pads.  That led Max to designing decorative posters for just that market.

Previously artists made fine art lithographic prints in limited editions which were signed and numbered and sold at galleries for hefty prices.  Max did some of that.  But he was really intrigued by the high quality that could be achieved on the new high speed four color web offset presses.  He borrowed and a technique of using a split fountain that enabled him to blend colors as they were going through the ink rollers that had been pioneered in San Francisco Oracle and in West Coast concert posters.  He described the process of playing a printing press to playing electric piano. 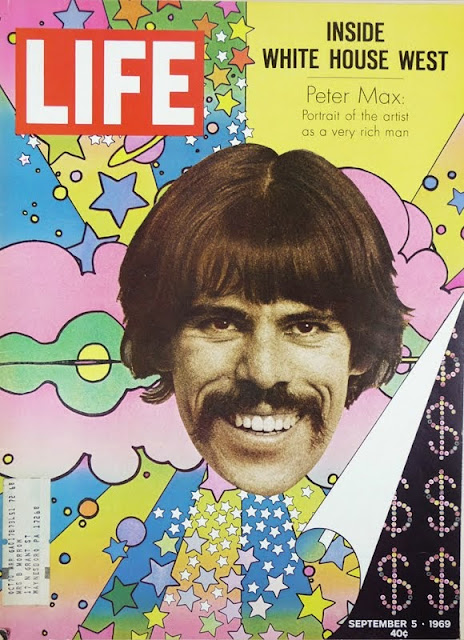 
Max’s posters registered with the zeitgeist.  In 9 months of 1968 several million of his posters were sold, mostly for less than $5 each.  He became not only a celebrity, but a household name.  That with his long black hair, drooping mustache, and colorful hippy togs—shirts made from fabric he designed he appeared on the Ed Sullivan Show, chatted with Johnny Carson on the Tonight Show, and was featured in a cover story in Life magazine.

The counterculture was going mainstream fast.  The success of the Peter Max brand led to more and more advertising and merchandising deals.  By 1970 Max licensed images to 72 corporations from General Electric clocks to Burlington Mills socks. Within a three year period, the line of products had generated more than $1 billion in retail sales.  And Max got a cut off the top of each sale.  No artist in history had ever made money this fast or easily. 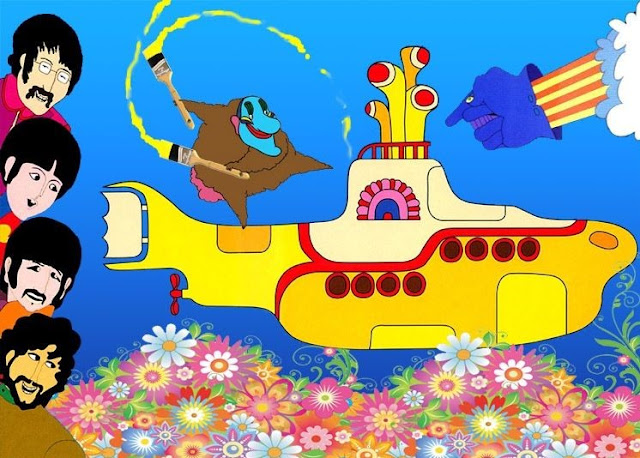 Peter Max was the obvious inspiration for the animation of The Beatle's Yellow Submarine, but the artist denied direct involvement although he claimed to have consulted with band members on the concept.

Max was so influential that he often got credit for work he didn’t do.  Most people think he designed the images for The Beatles’ Yellow Submarine animated film.  Although the work was obviously inspired by Max, the producers always denied he was involved.  In recent years however, Max has told interviewers that he was close friend with the Beatles, and they solicited him for ideas for the movie that were used.  But they wanted him to personally do the animation, which would have required seventeen months of continuous labor in Europe.  Instead Heinz Edelmann, who advertised himself as the German Peter Max, was officially commissioned to do the design work. 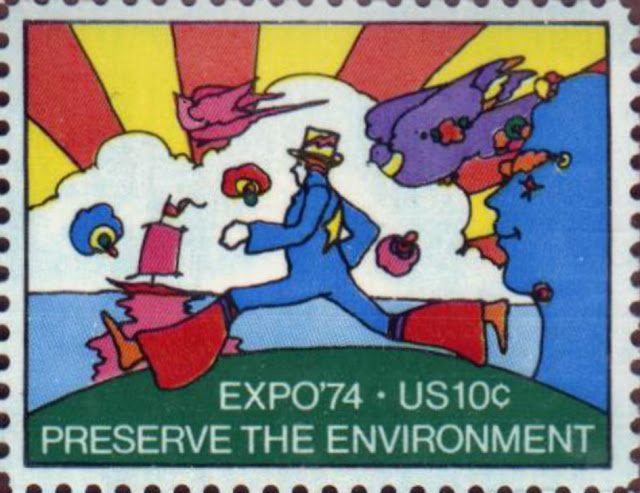 Max designed the 10 cent U.S. Postage stamp honoring the  1974 Spokane World Fair.
The Sixties may have been the acme of Max’s fame, but he has been consistently busy with original work and commissions ever since.  He has done a US Postage Stamp honoring Expo ‘74 World’s Fair in Spokane, Washington; a Statue of Liberty Series to raise money for the monument’s restoration; a Bi-Centennial book, Peter Max Paints America commissioned by a Swedish electrical conglomerate; posters, programs, and other art for major events including  the World Cup, the Grammy Awards, the Rock and Roll Hall of Fame, the Super Bowl, and World Series;  painted Dale Earnhardt’s Winston All-Atar Race car; a Continental Air Line jet; and a Norwegian Cruise Line ship. Peter Max and pop superstar Taylor Swift with one of four portraits of her he made in 2016.

In 2007 Abrams Books published The World of Peter Max one of the bestselling coffee table art books of all time and in 2013 Harper Collins issued Max’s memoirs, The Universe of Peter Max.

But Max’s recent years have also been clouded. In 1997, he plead guilty in a Manhattan Federal court to charges of concealing more than $1.1 million in income from the Internal Revenue Service in connection with the sales of his works between 1988 and 1991. The plea came two days before he was to go on trial on an 11-count conspiracy and tax fraud indictment. Under the deal, he plead guilty to a charge of conspiracy to defraud the IRS and a charge of tax evasion.  In June 1998, he was sentenced to two months in prison and a $30,000 fine.  Ultimately the judge ordered Max to pay the taxes he owed and to perform 800 hours of community service and he avoided time behind bars. 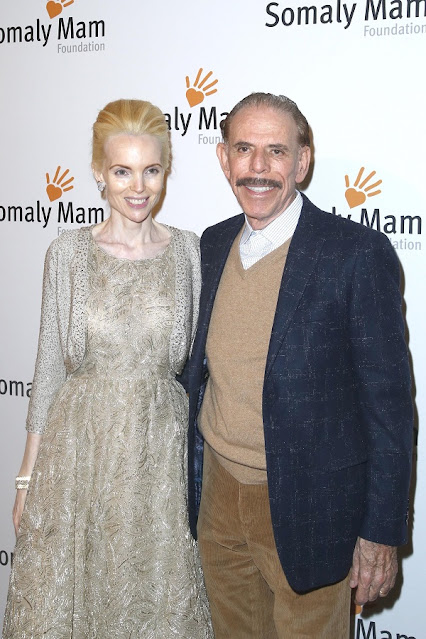 Max in better times with his wife Mary at a charity event.


More seriously, in the past decade Max has suffered increasingly disabling dementia.  His second wife Mary Marx, and environmental and animal rights activist who he wed in 1997 during his legal troubles and Adam Cosmo Max, his son from a previous marriage, were engaged in lengthy battles over his custody.  Mary alleged that Adam tried to keep Peter from his family and was involved in a scheme to peddle art allegedly created by him but actually produced by a team of others which was sold on a cruise line and in galleries around the country, raking in millions of dollars.

In turn, Adam accused Mary of abuse, a charge she hotly denied.  A court returned custody and guardianship to Mary but litigation over his attributed work continued.  In 2019 after a lengthy New York Times article on the family in-fighting, Mary committed suicide in her New York apartment in June 2019.  She sent a lengthy voicemail to a friend in London.  “She wanted to leave a message with certain instructions what to do with matters important to her and she wanted to say her goodbyes” to her husband, her brother and mother, and close friends according to her lawyer John Markham.

Posted by Patrick Murfin at 7:18 AM