The Lady Went Over the Falls in a Barrel 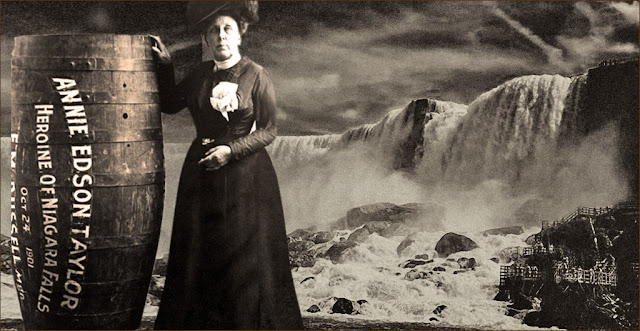 America fell in love with stunts and daredevils almost from the beginning.  The first American celebrity, after all was not an actor or musician, but Sam Patch, a young Yankee who leaped—twice—into roaring base of Niagara Falls from a high platform in 1829, only to die trying a similar stunt at the Falls of the Genesee River a few weeks later.  In 1859 the French acrobat Jean Francois Gravelet, better known as the Great Blondin crossed the gorge above the Falls on a tightrope in a series of increasingly spectacular performances incorporating numerous tricks.  Over the next three decades several others would duplicate the feat—or die trying. 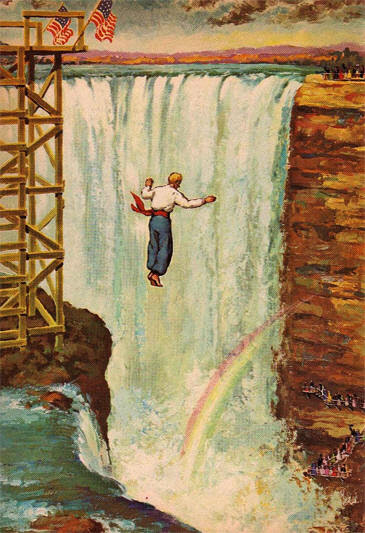 Sam Patch became America's first celebrity and established a tradition of daredevil stunts at Niagara Falls when he leapt into the gorge at the foot of the falls in 1829.

But the person who invented the most iconic of all Niagara stunts was a sixty-three year old woman encumbered by the enormous dress and petticoats, and high laced shoes fashionable in 1901.  Annie Edson Taylor became the first person to go over the Falls in a barrel.

The spectacular Falls of the Niagara tumble over a 165 foot escarpment near Buffalo, New York.  The international border between Canada and the United States separates Horseshoe Falls in Canada from American and Bridal Veil Falls in the US.  More easily accessible by boat from Montreal 75 miles upriver, only hearty—and wealthy—tourists made the daunting trip from the US in the late 18th and early 19th Centuries.  Intense fighting across the frontier in the region during the War of 1812 both interrupted tourism and later inspired more visits.

When the Erie Canal opened in 1829, visitors from New York City finally had a reasonably comfortable—if excruciatingly slow—means to visit the Falls from the American side.  Serious tourism began to take off.  Sam Patch’s famous jumps were the first stunts aimed at promoting the Falls as a tourist destination.  Local inn keepers and merchants on both sides of the border would continue to promote stunts when interest in the natural beauty of the Falls failed to lure enough visitors.

By 1841 it was possible to reach Buffalo, only 17 miles from the falls, by rail.  Excursion lines to the Falls followed.  After the Civil War the New York Central heavily promoted the Falls as a tourist and especially honeymoon destination.  Well appointed, even elegant, hotels began to replace inns and rooming houses.  The Falls became, bar none, the most popular tourist attraction in the country and remained so through much of the 20th Century.

Which brings us to Annie Edson.  She was born on October 24, 1838 in upstate Auburn, New York.  She was one of eight children of a prosperous flour mill operator and grew up in provincial privilege.  He died when she was 12 but left the family well provided.  She decided to take no chances when she grew up, so studied to become a teacher.  She became one of the few in her era to obtain a certificate for four years of preparatory study.

While studying she met and married David Taylor when she was 17.  The couple had one son who died in infancy.  After 7 years of marriage David was killed in the Civil War.  The young widow had to return to teaching, never a remunerative profession in those days, to eke out a living.

She bounced from job to job, place to place setting herself up as a music, dance, or even charm schoolteacher.  She eventually arrived in Bay City, Michigan where she established a struggling dance academy for young girls.  Then she went to remote Sault Ste. Marie to teach music in 1900.  When that failed she tried San Antonio, Texas and even Mexico City before returning to Bay City.  Taylor had small savings but was growing increasingly desperate that she would end up “in the poor house.”

That was when, recalling her enchanting visits as a child to the Falls, she concocted her wild scheme to make a fortune as a daredevil.

Taylor was not the first person to think of going over the falls in a barrel.  Cargo from steamers on the river above the falls frequently became dislodged for one reason or another and was swept over the precipice.  Even heavy wooden crates were routinely smashed either by the rocks below or the power of the falling water and turbulence.  But in those days sturdy oak barrels ringed with steel bands were common packing containers for a wide variety of staple items and even manufactured goods like China and glassware.  Many of those barrels went over the falls and were seen popping up from the foam below and being swept downriver.  Those with imaginations soon concluded that perhaps a person sealed in such a container might survive. 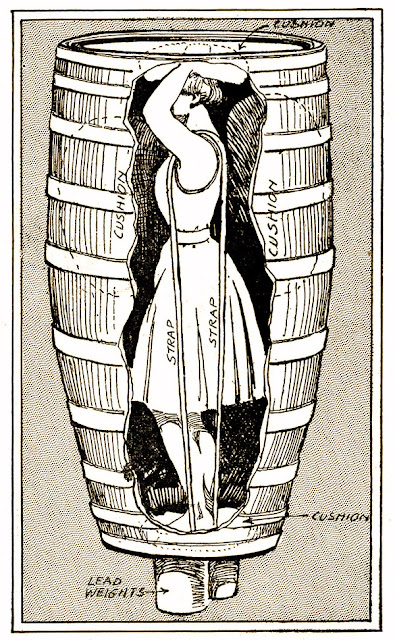 Taylor opted to go over the falls in a standing position in her special weighted barrel.  She was secured by straps over her shoulders and protected by a cushion under her feet and a mattress lining.  Her head, just a couple of inches from the barrel lid, was protected by a favorite embroidered heart pillow from her sofa.  No one else ever tried the stunt in this position.

At least a couple of poorly documented attempts were made with fatal results.  Taylor was convinced she could do better.  Investing her meager savings, she commissioned a long, narrow barrel to her specifications and personally supervised its construction.  It had to be high enough for her to be nestled erect cushioned by a mattress and other padding.  It contained two metal hand holds on the side and a leather strap loop for the lid.

On October 19, 1901 she tested the barrel by sending her pet cat Niagara over the falls in it.  The cat survived with a nasty gash on its head, which Taylor attributed to it not fitting snuggly enough in the padding.

She hired a manager to promote her and announced her attempt in the press despite a Canadian prohibition against such stunts.

At first she had trouble finding helpers willing to abet a “suicide.”  But she eventually secured a small boat to launch her and men to seal her in the barrel by nailing the lid down.  The air pressure was compressed to 30 p.s.i. with a bicycle pump in the water-and-air-tight contraption. 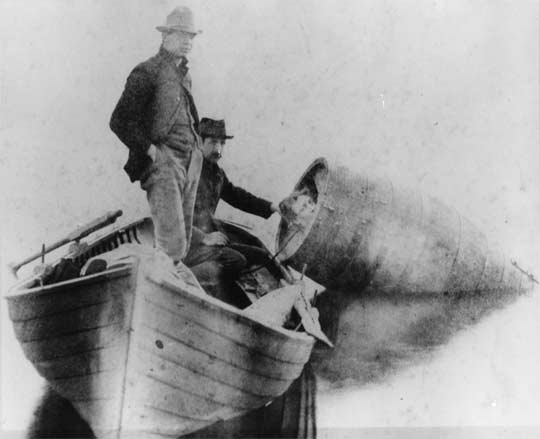 Two hired assistants helped Taylor into the barrel in the Niagara River above the Falls.

On the morning of the 24th, her birthday, several thousand people gathered to watch the spectacle. Taylor removed the heavy jacket of her best dress and her big hat, crawled into the barrel, which was lying on its side, backwards.  She had her helpers attempt to conceal this from the crowd because she considered it undignified.  She clutched a favorite heart shaped pillow for luck and extra cushion.  A rowboat towed her from the American shore to the Canadian waters above Horseshoe Falls where the lid was screwed down and air pumped in.

Less than twenty minutes after being set adrift, she was over the falls and her barrel was bobbing in the water downstream.  It took some time for it to be hauled to shore and the top opened.  “Mrs. Taylor are you all right?” the opener asked.  Clearly rattled she answered weakly, “Where am I?”

Dazed and battered Taylor was assisted from a rescue boat to the shore.

She was physically intact except for a small gash on her head.  But the experience had been traumatic.  She told the press, “if it was with my dying breath, I would caution anyone against attempting the feat… I would sooner walk up to the mouth of a cannon, knowing it was going to blow me to pieces than make another trip over the Fall.” 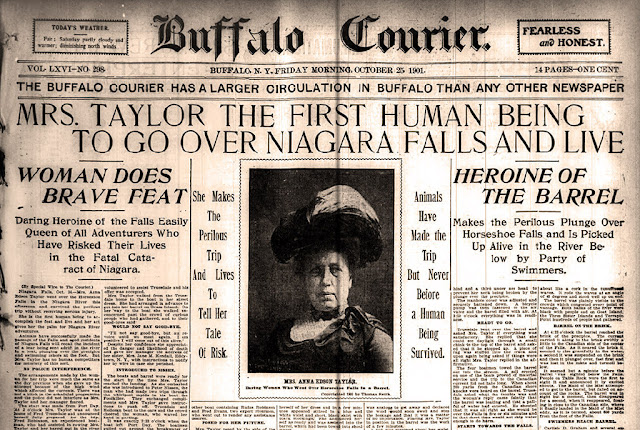 Taylor's plunge made headlines not only in Buffalo, but across the country just as she hoped.  But exploiting her fame for cash turned elusive.

As she expected, the stunt was a sensation, making headlines across the country.  She looked forward to exploiting her fame with on a tour with her barrel giving lectures about the experience.  But from the beginning there were problems.  She had been afraid that people would not relate well to such an old woman doing the stunt, so she had told the press that she was 45.  When she appeared on stage for her lectures, however, she looked like the 63 year old she was.  Audiences were convinced that she was a fraud, not the real “heroine of the mists.”  Many walked out, demanding their money back.  As word spread future bookings drew ever thinner crowds.

Her manager, Frank M. Russell, took off with the barrel, evidently planning to exhibit it with a younger actress pretending to be Taylor.  She spent virtually her last penny paying private detectives to find the barrel, which was eventually found in Chicago and then lost again.

In despair, by 1906 Taylor even considered making the terrifying trip again.  Luckily she was dissuaded.  Eventually she returned to the Falls where she spent her last years eking out the most tenuous of livings selling autographed souvenir postcards from a table on the street next to a reproduction of her barrel.  She died, as she had long feared she would, penniless on April 29, 1921 at age 82, in the Niagara County Infirmary in Lockport. She is interred in the Stunters Section of Oakwood Cemetery in Niagara Falls, New York.

Annie's stunt inspired many other daredevils riding in an odd assortment of barrels, spheres, and contraptions many of them are on display in the the Niagara Daredevils Exhibit in the lobby of the IMAX Theater at the base of the impossible-to-miss Skylon Tower above the Falls.

Taylor’s achievement inspired imitators—about 75% of whom survived, some with serious injuries.  At least 11 other attempts were made, two involving two people and some made more than one trip, in various barrels, balls, and contraptions.  Others went over the falls in kayaks, boats, a jet ski, and even totally unprotected either on purpose or by accident.  Generally with bad results.  As many as 30 people a year are thought to commit suicide by jumping in the river above or below the falls, many bodies not recovered.