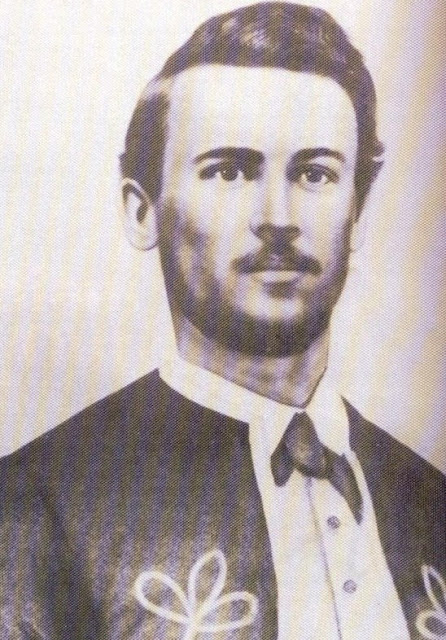 No one wants to be the last person killed in a war.  Particularly a war that has essentially been over for more than a month.  A war in which 144,000 Union soldiers were killed in combat (total deaths over 300,000) as were 72,500 Confederates (total dead 260,000.)  What may have once at least been seen as an heroic sacrifice in a noble cause seems heartbreakingly pointless at the last possible moment.  But Private John J. Williams of the 34th Indiana Volunteer Infantry became the last battle casualty anyway on May 13, 1865.

The Battle of Palmito Ranch near Brownsville, Texas was a needles waste of life that resulted in a fruitless Confederate victory.  Despite the surrender of Robert E. Lee on April 9, the Confederate Trans-Mississippi District, which included Texas, had refused to surrender.  Skirmishing continued near the Mexican border as Federal troops tried to disrupt continued contraband trade.

At one point the Union held all of the Texas ports to prevent oceanic trade and had strong garrisons along the Rio Grande in Eastern Texas.  But troops and naval units had been transferred to the eastern theater to wrap up the war there leaving coastal defenses only on Matagorda Peninsula and on the northern tip of Brazos Island at Brazos Santiago Depot near Confederate Fort Brown outside Brownsville.

After word reached the area of the fall of the Confederate government, a local gentlemen’s agreement was reached to suspend offensive operations to avoid unnecessary loss of life. 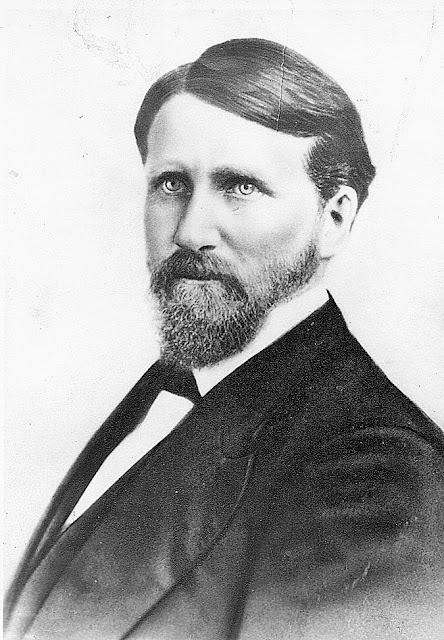 But for unknown reasons Union Col. Theodore H. Barrett decided to move against Ft. Brown.  Barrett orderd Lt. Col David Branson to move out on the evening of May 11.  Branson commanded 250 men of the 62nd U.S. Colored Troops (U.S.C.T.) Infantry and 50 men of the 2nd Texas Volunteer Cavalry, a unit made up of Texas Unionists who were fighting that day dismounted.

The operation went awry from the beginning.  Foul weather prevented a planned crossing to the mainland at Point Isobel.  After hours of delay Branson finally got his troops ashore at Boca Chica.  Around 2 a.m. May 12 his troops surrounded a Confederate camp on the White Ranch but found it empty.  Branson decided to let his exhausted men sleep but ordered them to conceal themselves in brush and hollows on the ranch to avoid detection from Rebel scouts.  But Mexicans, whose income was tied heavily to the contraband trade, spied the Federal movements and alerted Ft. Brown.

Made aware that he had been spotted, Branson the moved out at 8:30 to attack a Rebel camp and supply depot at Palmito Ranch.  Along the way they skirmished with out-numbered Confederate cavalry before dispersing them and occupying the camp after a short fight.

Branson decided to rest and feed his men while beginning to destroy supplies.  Around 3 a.m. the following morning the full force of Capt. W. N. Robinson's 190 man company of the Lt. Col. George H. Gidding’s Texas Cavalry Battalion re-appeared.  Alarmed, Branson ordered a fall back under pressure to White’s Ranch and sent word to Col. Barrett for reinforcements. 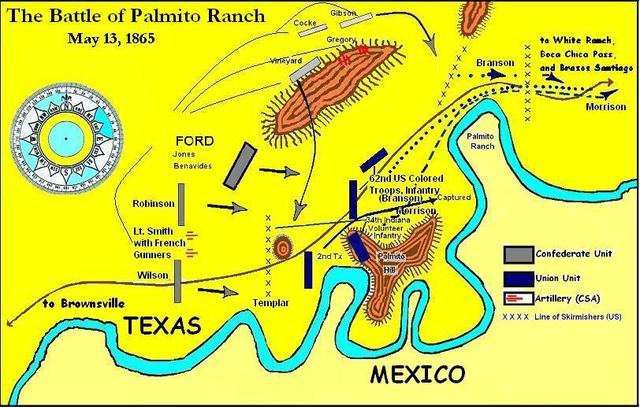 Positions and maneuvering in the Battle of Palmito Ranch.

Barrett arrived early on the 13th with 200 men from the 34th Indiana and assumed command.  He ordered his combined force of about 500 men to advance again on Palmito Ranch.  After a sharp engagement with the cavalry in the thickets along the Rio Grande, Robinson’s Rebel troops again fell back until they were reinforced by 300 hundred men from Ft. Brown under the command of Col. John Salmon (Rip) Ford including men of his own Second Texas Cavalry, Col. Santos Benavides' Texas Cavalry Regiment, additional companies from Giddings's battalion, and a six-gun battery of field artillery under the command of Capt. O. G. Jones.

With a significant cavalry force and artillery, Ford caught the exposed union infantry in the open at Palmito Ranch.  The Confederates opened with an artillery barrage at 4 p.m..  Union forces were flanked by Robinson attacking from the left by the river and by two other companies of Gidding’s Battalion on the right.  Then the rest of Ford’s cavalry charged the center, breaking the Union line and sending them into a rout.

Looking more parade ground organized than it probably was, this painting of the Battle of Palmito Ranch show Confederate artillery fire exploding in Union ranks as the cavalry charges the center of the line and the Northerners were trapped between flank attacks.  The Yankee loss and Rebel victory were both ultimately meaningless.

Panicked, Barrett ordered 46 Indiana men to form a screen to cover his retreat.  They were quickly overwhelmed and killed or captured.  It looked like the cavalry might cut through the main force until a second line of 140 men of the 62nd Colored  running from the Rio Grande to three-quarters of a mile inland did the slow the Confederate attack enough to allow the Union forces to get away to the coast where they were reinforced from Brazos Santiago and put under the protection from guns on Navy costal patrol boats.

Ford told his troops, “Boys, we have done finely. We will let well enough alone, and retire.”  The final running fight lasted a little over four hours.

The Federals forces lost 111 men and four officers captured, 4 killed including the unfortunate Pvt. Williams, and 30 wounded.  The Confederates reported a less than a dozen wounded and three captured.

On May 26 Rebel forces in Texas surrendered and Col. Barrett soon after took command of Ft. Brown.  Major General Kirby Smith, commander of the Trans-Mississippi District became the last major commander to formally surrender on June 2. 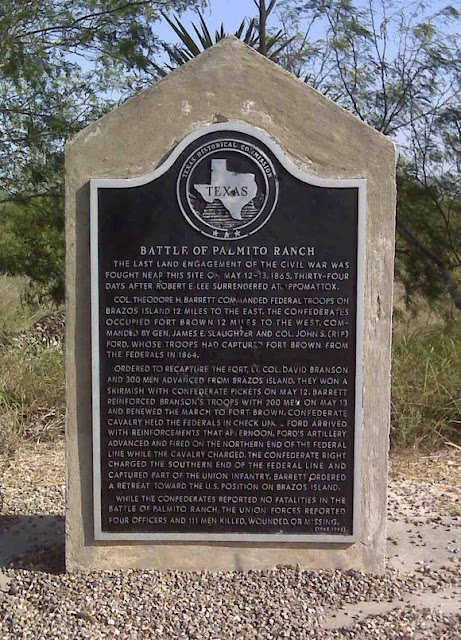 The official State of Texas historical marker for the battle.  Texans make a big deal about the final battle and victory of the war.  Union historians barely mention it in a footnote.

Smith, Ford, and most of the other senior commanders in that district and in Texas soon crossed into Mexico on a promise of land grants from Emperor Maximilian and to assist French troops should the massive Army under General Philip Sheridan that was posted to the border attempt to intervene directly in the brewing Mexican civil war.  Once again they picked the losing side of a war.  Some returned to the U.S, where they were active in resistance to Reconstruction and the eventual establishment of Jim Crow laws.

Posted by Patrick Murfin at 7:01 AM