This year in front of a Coronavirus limited crows Medina Spirit crossed the wire first at the 147th Kentucky Derby.  But the roses were almost immediately tainted when the horse tested positive for a banned substance, the corticosteroid betamethasone sending the racing world into an uproar. 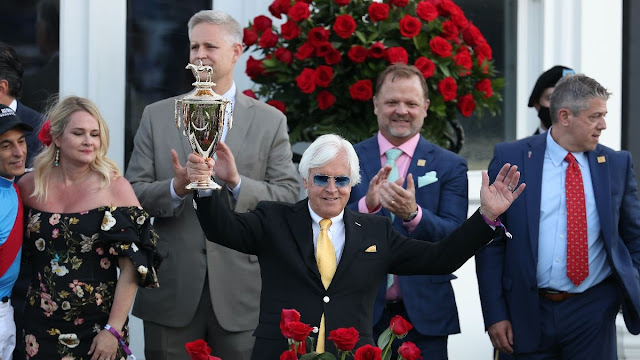 Perhaps because the substance was not injected or ingested Banford may get off the hook.  Or it might be that a judgement against him might taint all of his previous big wins and shake confidence in an industry now falling on hard times as legal on-line sports betting cuts deeply into the income at the window for tracks.  Madina Spirit was allowed to run in the Preakness this weekend and placed third.

Despite these perilous developments, the Derby got off to a famous start. 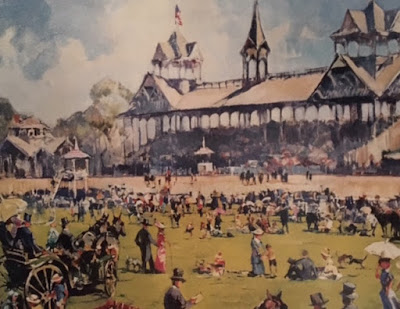 It was 1875.  Good times were rolling again in the Blue Grass State.  Ten years after the end of the Civil War Kentucky, the former divided border state which had been the scene of some hard fighting, but had largely escaped the utter devastation wrecked on much of the Deep South as well as the pangs and pains of Reconstruction, was feeling frisky.  The river trade on the Ohio was thriving.  The eastern coal fields were fueling an industrial explosion and bringing new money pouring into the state, even as the miners who dug the black gold did not much share in it.

As usual the Bourbons on their great estates with their sprawling lawns and miles of crisp white painted fencing skimmed the wealth, got fat, and played with their horses. Louisville Blue Bloods got together for an upgrade from the fairgrounds and ramshackle tracks that had dominated horse racing.  They had in mind something much grander, along the lines of the prestigious Epsom Downs in England, home of the storied Derby Stakes.  John and Henry Churchill leased 80 acres for that purpose to their nephew, Colonel Meriwether Lewis Clark Jr., President of the Jockey Club and grandson of explorer William Clark.  He laid out an unusually long track one mile dirt track with a shorter turf track inside of it.  He erected larger grandstands capable of seating a few thousand.  There was plenty of land for stables and exercise areas in the back stretch and the Louisville and Nashville Railroad could bring horses to race from across the country. 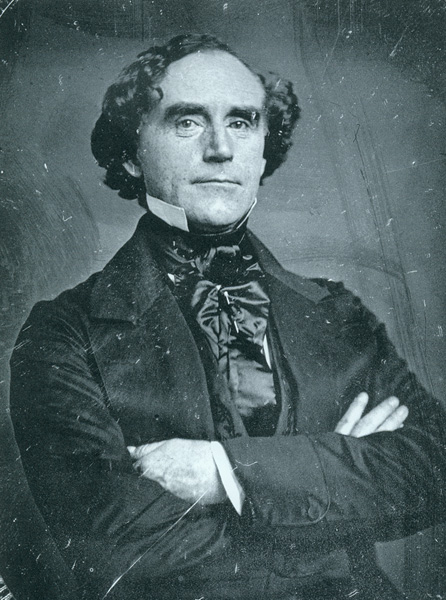 Col. Meriwether Lewis Clark Jr, founder of Churchill Downs and President of the Jockey Club was the father of the Kentucky Derby.

The new track would open that spring at a very good time.  America, thanks to newspapers, illustrated magazines, and the telegraph was going sporting mad.  And with professional baseball in its infancy, sporting men followed horse racing and bare knuckle boxing and were ready and willing to lay a bet on any likely contest.

Clark and the Jockey Club decided to launch their new track, grandly dubbed Churchill Downs with a stakes race rich enough to attract the best young horses from the best blood lines in America.  They called it the Kentucky Derby.

On May 17, 1875 ten thousand people flocked to the track.  Gentlemen in high silk hats, frock coats, striped pants, spats, and kid gloves and their ladies in flowered and feathered hats pinned jauntily to their ringlets, acres of shining silk in dazzling colors, bustles, and twirling parasols sat in Landaus and other fine carriages with liveried drivers lined along the rails.  The grandstands were crowded with the middling folk—the merchants and clerks, doctors and lawyers, railroad and steamship men, the yeomen farmers, students—men mostly.  Standing crowding the rails were the rough laborers, dock hands, stablemen, as well as the loungers, loafers, and drunks that were common in any town, and the occasional enterprising strolling prostitute keeping an eye open for winners.  Here the Black and White mingled and jostled.   Everyone loved the races.

Circulating through them all were the sporting men in their bowlers or soft hats and checkered suits willing to take any man’s wager.  The smell of cigars, whiskey, sweat, and money was thick in the May air.

There were 15 fine looking entrants in the featured race which was to be run over a mile and a half course.  Getting them calmed and lined up must have been a chore, the inevitable delays rising excitement in the crowd.  When the starting gun went off it resembled a cavalry charge more than a race, but as the horses pounded around the track they began to string out and one horse pulled ahead, dominating all of the others. 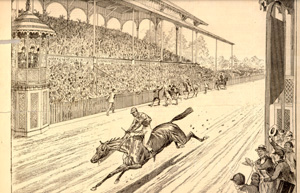 Aristides romped to a long lead as he crossed the finish line in record breaking time.

19-year-old Oliver Lewis was in the saddle of Aristides who was supposed to be the jack rabbit in the race expected to get off a fast start to wear the rest of the field down over the long distance so that Chesapeake, the stable’s favored horse, could come from behind for the win.  It did not work out that way.  After briefly being challenged, Aristides began stretch out his lead to cross the finish line with a two length lead in 2 minutes and 37.75 seconds, a world record for the distance.  Aristides’s half-brother Chesapeake never made his break and finished in 8th place.   Both were owned and bred by H.P. McGrath and trained by Ansel Williamson. The winner received a purse of $2,850 and he second place finisher Volcano received $200.  Substantially more money than that changed hands in betting.

In the flowery prose that was even then the province of sports writers, one covering the event for the  Louisville Courier-Journal wrote, “It is the gallant Aristides, heir to a mighty name, that strides with sweeping gallop toward victory...and the air trembles and vibrates again with the ringing cheers that followed.”

All in all it was a thrilling day.  And a successful one.  The Derby almost instantly became the premier event for three-year olds.

After Lewis, a fan of the long distance, sold his interest in 1895, new ownership shortened the race to the current mile and a quarter.  They also built new grandstands with the distinctive twin towers now known the world over.  And they began the custom of presenting the winner with a blanket of roses. 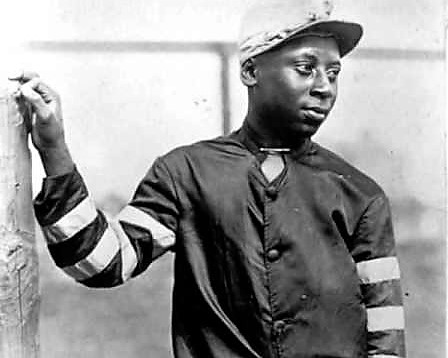 There would be other changes, too.  In 1875 Oliver Lewis was one of 13 out of 15 jockeys who were Black.  So were the majority of the trainers like Williamson.  But in the Jim Crowe Era, it would never do to have the silks of gentlemen worn by Black men.  For decades yet to come the jockeys at Churchill Downs would be nearly as white as those fences.