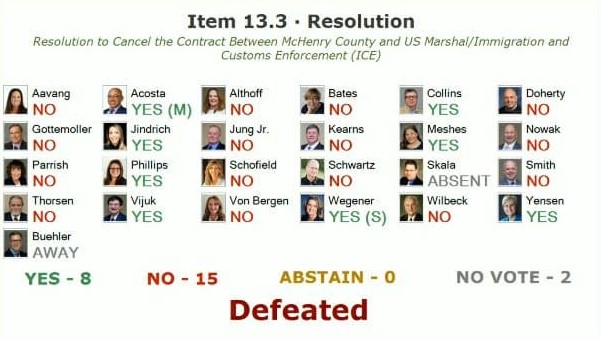 Tuesday evening the resolution to cancel the contract between McHenry County and the Federal Marshalls Service for immigrant detention finally came up for a vote of the whole Board.  After an intense community campaign members and friends of the Coalition to Cancel the ICE Contract in McHenry County held a rally in the rain in the parking lot of the County Administrative Center in Woodstock before the meeting.

Board members clashed openly in a highly contentious and emotional discussion.  Republican members attacked and belittled opponents.  In the end the vote was 15-8 against ending the contract.  As expected all 8 Democratic members voted to end the contract with no GOP support even from members who had vote in favor in the Law and Government Committee. Mike Skala, the Chair of the Finance Committee, who confided in me in a lengthy telephone conversation that he would likely vote for the resolution when it came to a final vote and made similar statements to others was conspicuously absent Tuesday. 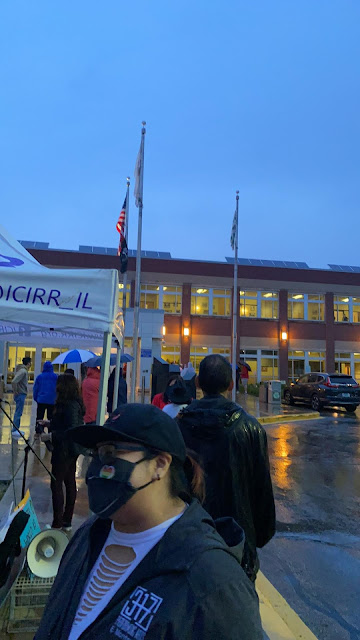 A cell phone snap of the Coalition to Cancel the ICE Contract in McHenry County rally in the rain before the Board vote.

Some Republicans who had indicated that they were open to the issue succumbed to heavy pressure including on-line attacks on them as RINOS (Republicans in Name Only) and threats to challenge them in primaries.  The Trumpist rabid right wing base of the party was roused in Facebook groups and by highly targeted robo calls.  No one knows for sure who financed the campaign but deep pocket local businessman Gary Rabine who has announced his candidacy for Governor as a hair-on-fire red meat Republican was on hand to pedal scare stories of rampant immigrant criminals and by inference to remind wavering board members where he will put his money in the next election. 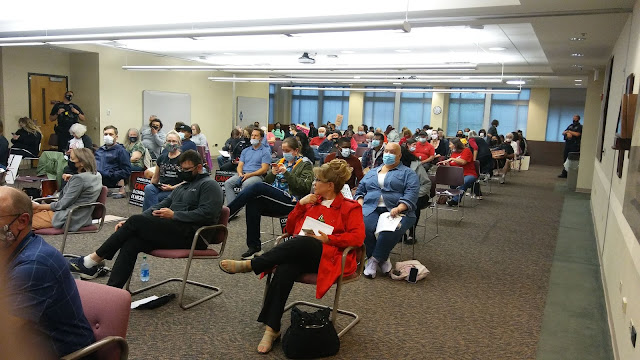 The crowd at the Board meeting.  Coalition members and supporters and people dressed in red, probably opponents roused by radical racist Orville Brettman.

Also organizing opposition was Orville Brettman who called on his followers to attend a counter demonstration dressed in red and to sign up to speak in public comments.  In contradiction to usual practice members of his group and others opponents of the measure were called on to speak before supporters who had signed in earlier.

Brettman is a long-time bigot and hate group member and leader with a history of violence.  In 2018 he ran for County Board.  Local activists have been battling him for years.  His followers are among the most volatile and dangerous in the county.  The following account of his activities was posted on my blog in 2018 during the campaign”

Former Carpentersville Mayor and far right activist Orville Brettman recently made headlines when his past as an admitted terrorist for the Legion of Justice, a right wing paramilitary group with ties to the infamous  Chicago Police Red Squad in the late ‘60’s and early ‘70’s.  He admitted in Grand Jury testimony after a grant of immunity to committing burglaries to Chicago offices of the Socialist Workers Party (SWP) and Communist Party to retrieve “intelligence” presumably shared with the Red Squad.  Even more troubling he planned and executed a raid on an apartment of members of the SWP affiliated Young Socialist Alliance at Northern Illinois University in DeKalb in which students were beaten with clubs.   He also was involved in bombing the historic Elgin Universalist Church because it hosted meetings of the Fox Valley Peace Group and supposedly “hid arms for the Black Panthers in the basement”—surely one of the most ludicrous claims ever.  Later he was involved in running guns to white opponents of the then new anti-apartheid government of Nelson Mandela and the African National Congress in South Africa.  More recently he has been a political operative and dirty trickster focused on attacking RINOs—Republicans in Name Only.  He was also supportive of the Illinois Minute Man group, recognized by the Southern Poverty Law Center’s Klan Watch as a hate group.    Brettman is entirely unapologetic about any of this, makes light of the charges, and even boasts of his adventures as a “spy.”

The involvement of Rabine and Brettman speaks volumes about the racist core that has taken over the Republican Party and which can frighten so-called moderates.

But the nearly yearlong effort was not wasted.  A wide community was mobilized and empowered and awareness of the issue raised.  The Coalition will move forward on different fronts including challenging no voters in the upcoming post-reapportionment Board elections in 2022 and working in support of proposed state legislation, the Illinois Way Forward Act, which would prohibit the use of county jails as detention centers.  We will also cooperate with wider regional and national efforts at immigration justice.  The struggle continues. 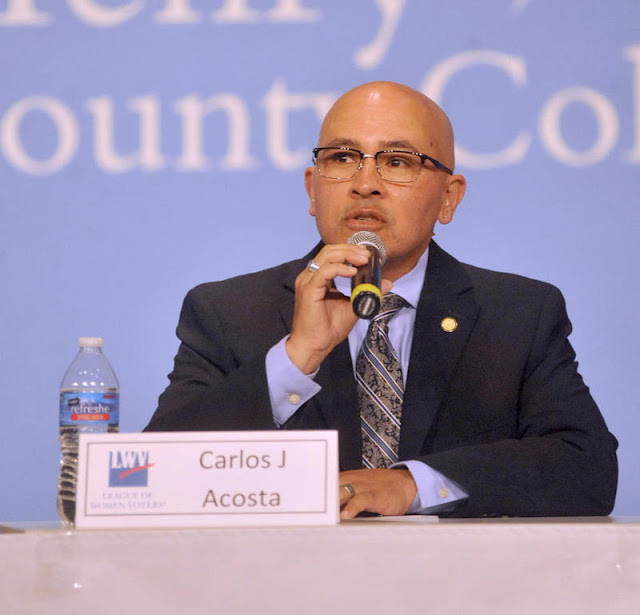 Carlos Acosta during his campaign for the County Board.

Long-time Latino community leader and Democratic District 5 Board member Carlos Acosta who first brought the original resolution to end the contract last year was admittedly disappointed.  He posted “Tonight we suffered a huge loss.  Along party lines (15 - 8), the McHenry County Board voted to keep the contract with ICE.  Tonight we mourn.  Tomorrow we get back to work.  We will win.”

Democratic activists and super committee person Lisa Arvanites wrote, “Republicans decided not to end the ICE contract. Vote them out. In 2022 every single County Board seat is up for election as we shift from 4 member districts to 3 member districts. Let’s make some meaningful change.”

Maria Valdez, a member of the Coalition Leadership Team expressed optimism, “We’ve won so much. We built community power in a rural, conservative county and forced them listen to us. That’s a win. We’ve built friendships, partnerships and alliances. We’ve won so much. Hold on to the love and solidarity we have for each other.” 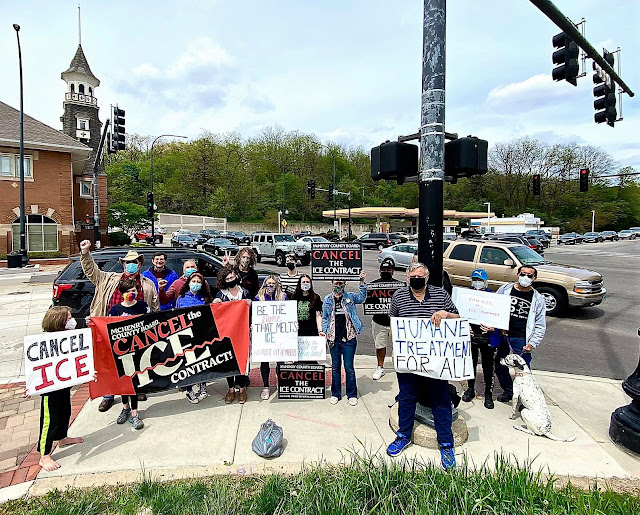 County Board member Michael Vijuk of District 1 attended almost every community event sponsored by the Coalition.  Seen here just behind the Old Man in a blue sweat shirt.

District 1 Democratic Board member Michael Vijuk who has been very visible during the campaign including appearing at nearly every event organized by the Coalition told the Chicago Sun-Times “We are going to throw a pebble in the water; it’s not a big rock, not a massive thing, That pebble will begin to ripple.”