The Seed and I—The Beginning a Murfin Memoir 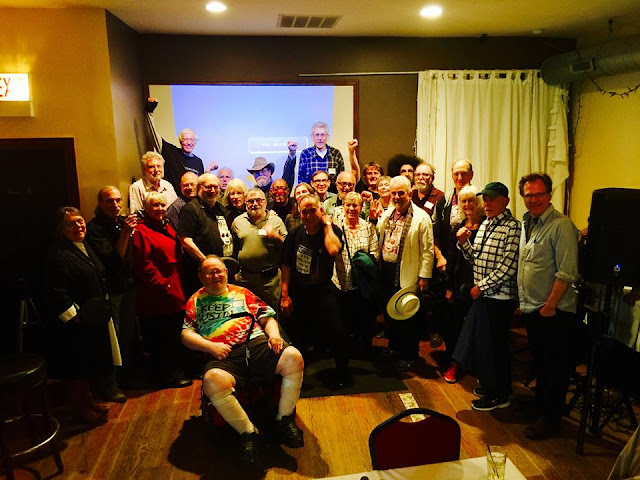 The 50th Anniversary Seed Reunion in Chicago, 2017--youth culture gone gray.  Too many to identify but Abe Peck, the event organizer and MC is in the front row center and Bernie Farber who was on the staff with me if in appropriate tie-dye in front.

Note—Four years ago on Chicago’s Northwest side there was be an assemblage of wrecks, relics, geezers, and survivors who gathered to celebrate the 50th anniversary of the first issue of the Seed, the Windy City’s semi-legendary hippie/Yippie/psychedelic/radical/underground newspaper.  Your scribe was one of the former staff members, associates, street peddlers, allies, drug suppliers, and hangers on in attendance at the reunion.  Stories were told.  Some of them were true.

In the spring of 1967 Old Town and a four or five block strip of Wells Street with spill-over east and west on North Avenue was the Mid Continent epicenter of an exploding counter culture.  Nothing between Washington Square in New York and the Haight in San Francisco had anything like it—a vibrant street scene the nurtured music, the arts, and all forms of eccentric self-expression.  Wells and North were lined with music bar venues, bookstores, quaint cafes, specialty shops, and attractions like Piper’s Alley and Second City.  It was a magnate for young people who thronged the sidewalks on weekends and warm evening.  Dope of all sorts was casually plentiful and cheap, and there was an electrifying possibility of sexual adventure with the supposedly free spirited/free love Hippie chicks and semi-shirtless young dudes.  What went largely unacknowledged was that many of the runaway/throw away street kids were drifting into and sometimes coerced into prostitution.  But, hey, it made the whole scene more exotic and alluring. 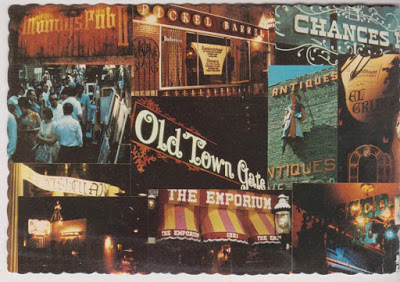 A post card of Old Town from the '60's.  It was all happening there, babe!

Not only college kids and weekend hippies from the suburbs crowded those streets, but Old Town had become a major tourist attraction.  Plenty of curious parents, businessmen on the prowl, Division Street swingers, out of town Conventioneers, and Great Lakes Sailors joined the crowds especially on weekend nights.  There were even tour buses.

What the scene did not yet have was an alternative press like the venerable Village Voice or the Berkley Barb.  Enter Eric Segal (aka The Mole), proprietor of the Molehole, a pioneering headshop and poster palace, and artist Don Lewis who had designed psychedelic posters for the shop.  The Mole had the bankroll.  Lewis had a vision and friends who could fill the pages with art work, photos, articles, poetry, and music reviews.  There was every expectation that the street crowds would snap up a paper both as guide and a souvenir and the local merchants, bar owners as well a concert promoters and record labels would be eager to buy adverting to reach them.  Or so it was hoped. 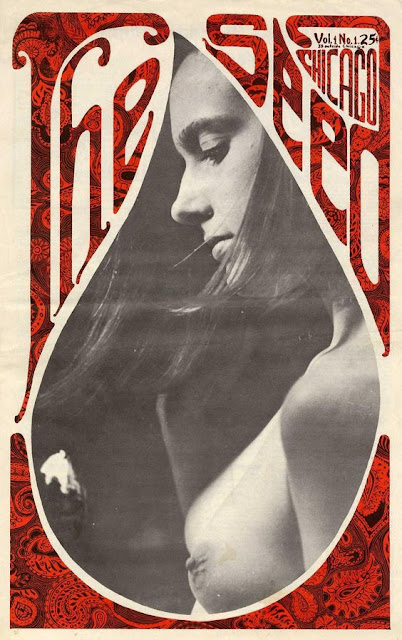 The Seed premiered with a splash.  The Village Voice and Berkley Barb still resembled conventional newspapers with headlines, photos, and text on their front pages.  The tabloid size Seed would have a more magazine style with an eye catch full cover illustration—and a radical declaration of full throttle counter culture.  The paper would not just be the alternative press—it would be a damn the torpedoes underground newspaper.  The first cover featured a photo cameo of a beautiful, topless waif framed by San Francisco psychedelic lettering.  Yet she was not lurid like a South State Street burlesque queen, or one of Hugh Heffner’s fantasy inflatables.  She exuded a kind of innocence and fresh vulnerability.  This was something new indeed.  And as predicted the first issue sold out almost before the ink was dry.

The City stood up and took notice.  Gate keepers of morality predictably clucked loudly.  The Seed was denounced by the Chicago Tribune, decried from pulpits, and the police made threatening noises of busting the street venders if such outrages continued.  All of which just stepped up demand for the next issue.  There may not have been any more cover photo nudes, but naked nymphs continued to be seen in imaginative illustrated covers.

I probably picked up my first copy, maybe No. 3 that June one of my regular forays to Wells Street from Skokie.  I had just graduated from Niles West High School and was working as a dishwasher at a Howard Johnson’s Restaurant to earn money for school that fall at Shimer College in Mt. Carroll, Illinois.  All summer long I brought home copies.  To me they were instruction manuals.

Before the first year was out the founders had a business falling out and the paper was sold.  The new management kept the counter cultural feel and even more talented artists like Lester Dore took over the graphic design which made the paper “the most beautiful underground paper ever produced.” 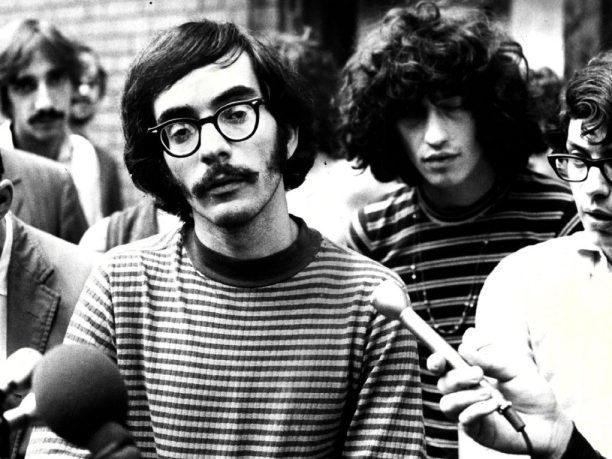 Seed editor Abe Peck became the news as the Yippies planned to descend on Chicago in 1968.

The paper was not heavily radical in its early editions, concentrating instead on culture.  But growing resistance to the Vietnam War and the approach of the 1968 Democratic Convention changed that.  Under the more radical leadership of Abe Peck the Seed became something of a house organ for Yippies! despite his initial prediction that their plans would end in disaster.  Under the leadership of Abby Hoffman, Jerry Rubin, and Paul Krasner of The Realist, the Yippies were plotting a total disruption of the Democrat’s nominating party.  In the spring of ’68 covers changed from flower power to Yippie!

Back from Shimer for the summer, I came into the city to take classes from radical professor Staughton Lynd at the Free University at Roosevelt University.  He wanted to mobilize our class as participant observers of upcoming Convention demonstrations, which in addition to the Yippies had more conventional marches and rallies planned by the New Mobe and others.  I volunteered to investigate the Yippies, about whom I knew next to nothing except that I could probably find them from the Seed. 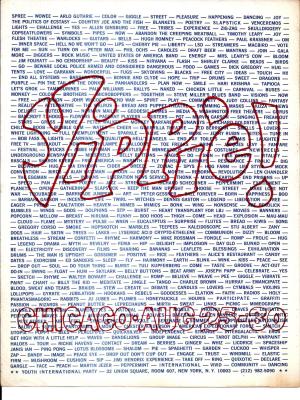 The Yippie! Call to the Democratic Convention protests.  The Seed would be up to its eyeballs with preparations, the police riots, and the subsequent trials and protests for the next two years.

The following is an excerpt from my Convention days memoirs, Chicago, Summer of ’68:

I made my way to the one place in Chicago where I knew any Yippies could likely be found—the offices of the underground newspaper the Seed then on LaSalle Street just south of North Avenue within blocks of ground zero for the staging area for the Yippies in Lincoln Park.

The door was wide open to a dimly lit, cluttered, and chaotic office a few steps below street level. Two dudes with suitably long and unkempt hair were sweating over a table. “Hi!” I said, “I’m looking for Abbie Hoffman or Jerry Rubin.” I was greeted with incredulous stares and deep suspicion.

Let’s review how I looked that summer—the frayed white short sleeve salesman-cast-off shirt, the store brand jeans with the cuffs turned up, the heavy Wellington work boots, the natty red kerchief knotted at the throat, scroungy orange goatee, thick horn rim glasses, topped by a battered white Stetson. I looked like I may have just graduated from the J. Edgar Hoover Academy for Stool Pigeons and Spies.

“They’re not here,” one of the guys said without volunteering any information on their whereabouts or how I could contact them. I could have been staring at both of them that very minute and I wouldn’t have known it.

A brief but cool conversation followed. I was beginning to detect full blown drug induced paranoia from them. But they did give me some handbills and other information about the publicly announced plans for Convention week, all of which relied on free camping in the Park.

It would be my first in-the-flesh encounter with Seedlings.  It would not be my last.