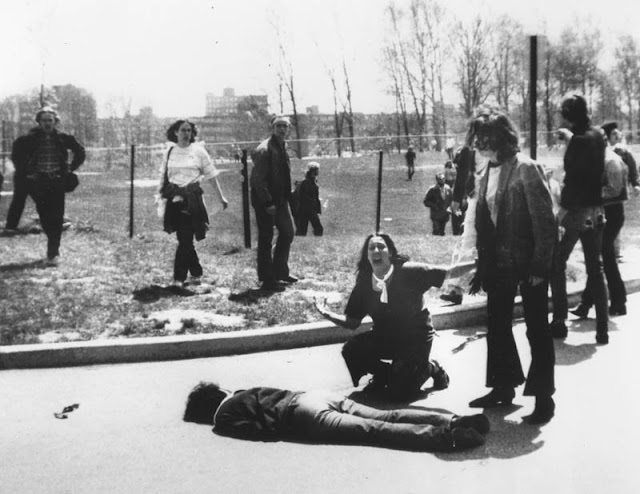 Note—May 4th is one of those dates that stop us in our tracks when they roll around each year.  At least is does for an aging generation who were young and radical fifty-one years ago.  When the Ohio National Guard opened fire on campus anti-war protestors at Kent State University killing four and injuring several it was a shock of vulnerability for privileged White kids flirting with revolution.  Black students, although outraged, were not at all shocked by killings at Jackson State University in Mississippi days later. If you are a member of subsequent generations, the date may have no meaning for you at all—just another of the Boomer things.

Memoir stories like this are intended purely as the observations and reminiscence of a single participant.  I don’t exaggerate my importance.  I was a foot soldier in the movement in those days neither a leader nor central figure.  In this instance I stumbled upon an unusual role by happenstance and then faded back into the woodwork universally unnoticed.  The story here is just a hopefully interesting angle on a moment in history.

My Own Private Kent State

I must have been at my brother Tim’s (later known as Peter) apartment on Sheridan Road near the Morse Ave. Beach when we got the news of the shooting.  Oddly, unlike other Great Events, I can’t fix in my mind the moment I heard the news.

Rather than hopping on the L to get to my own school, Columbia College, then a small communications college located on a few floors of a commercial building at Grand Ave. and the Inner Drive north of the Loop, my brother convinced me to go with him and his friends to his campus, Kendall College in Evanston.  Kendall was then a small, private two year college mostly drawing students from the northern suburbs.  Neither the school nor my brother was particularly politically active.  Tim was the center of acid dropping spirituality and the self-appointed guru to a circle of acolytes, many of them fellow students at Kendall.  He said he left the Revolution to me. When we arrived on campus, students were in full possession of the buildings and the administration was nowhere to be found, although some faculty was on hand mingling with the students.  There was no police presence; it was as though the administration had simply abandoned the school to the students. 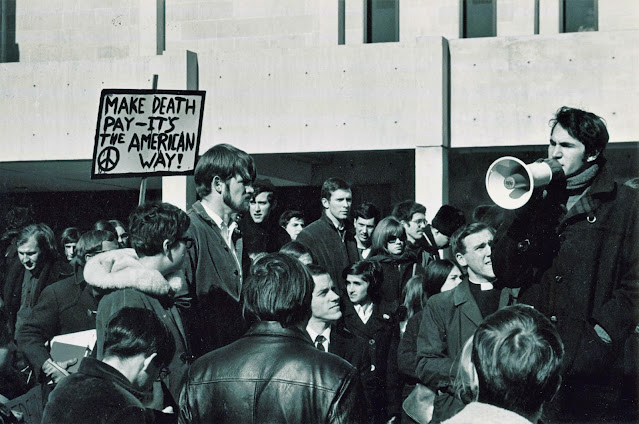 Students rallied on the Northwestern campus.  The night of May 4 they erupted onto Sheridan Road and erected barricades that stayed in place for days.  Some students from near-by Kendall College went over to join them.


Some folks had gone over to join Northwestern students at barricades erected on Sheridan Road.  Others milled about trying to figure out what to do.  One student was working a Ham Radio and gathering information from actions at campuses across the country.  We soon realized that this could become an asset.

Phone connections were somehow made with students from campuses across the Chicago area and we fed them news gleaned from the Ham operator.  Not all of that information was reliable, some turned out to be wild rumor, but enough was good so that it became apparent that we were part of a spontaneous nationwide student uprising that was growing by the hour.

Besides participating in the phone network, I started posting the news on large sheets of paper, updated regularly throughout the night to keep students informed.  I called them the Joe Hill Memorial Wall Posters and had about a dozen of them lining hallways by the time the night was over.

There were also informal discussions all night.  I was considered a real live activist because of my connections with the Industrial Workers of the World (IWW) and my input was probably given more credence than I deserved.  By morning I had agreed to return to campus later and set up some educational programs, which I did do, although Kendall never became a hot bed of radicalism.

In the morning, running on adrenalin, I headed down to Columbia.  Columbia was a commuter school specializing in communications and the arts—broadcasting, photography, theater, dance, and writing.  With no one living on our non-existent campus, I was not sure what I would find.  There were no classes but it wasn’t exactly a strike either because the administration was totally supportive of the student cause and offered the facilities of the school free to the movement.

I headed down to the print shop in the basement, where I worked as one of two printers.  We ginned up our little A.B. Dick 360 and Multilith 1250 offset presses and were soon turning out hundreds, even thousands of flyers, posters, handbills, and other material advertising actions across the city and region. 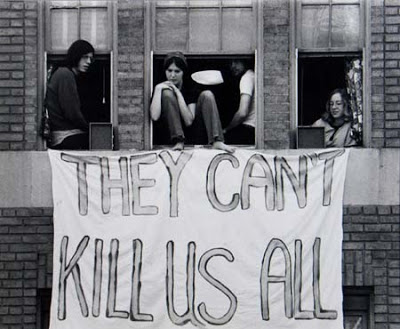 This banner hanging from an occupied campus building somewhere in America summarized the mood of outrage and defiance that swept campuses.


I have no recollection of how, but I was selected as one of two representatives from Columbia to a city wide student strike committee.  I believe it was Wednesday when a couple of hundred folks met at the Riviera Theater in Uptown to plan coordinated actions.

The meeting was a perfect example of sometimes chaotic participatory democracy, but a consensus was arrived at to have a unified, city wide march and demonstration downtown on Saturday.  I was named to the demonstration organizing committee with students from University of Illinois Circle Campus, University of Chicago, and Roosevelt, among other schools.  Many of the others members were in SDS.  Some were Trotskyites, who made something of a specialty of organizing big demonstrations.  There was a sprinkling of Anarchists as well.  But the ideological wars that wracked campuses were suspended—mostly—in the face of the common emergency.  Another meeting the following day was held at Circle Campus.

Again, I have no memory of how, but I was selected to try and negotiate with Chicago Police in what most felt was the vain hope of avoid an attack by authorities the day of the March.  Given the background of the Police Riots against demonstrators during the 1968 Democratic Convention, at protest marches connected to the trial of the Chicago 7, and the virtual street warfare around the Days of Rage in October ’69 there was little reason to hope for a better outcome.

Late Thursday afternoon I was escorted through an eerily quiet Police Headquarters to the office of Deputy Superintendent James Riordan.  I believe I may have been taken through a route intended to keep rank and file police from seeing that the brass was meeting “the enemy.”

Riordan was cordial.  We shook hands.  We both clearly understood the potential volatility of the situation.  I told him that organizers intended an entirely peaceful march and pointed to some earlier mass marches that had gone off without a hitch.  I also pointed out that there had been no significant violence on any of the Chicago area campuses even at Northwestern with its barricades or the building occupations at other schools.  I said that we would have marshals to keep our demonstrators in line and moving and to discourage break away marches.  Although others were trying to obtain a parade permit, I said that we intended to exercise our free speech rights and march with or without one.

Riordan said he understood and said that the police did not want to provoke a confrontation and would be as “restrained as possible.”  I told him that we expected police would line the route of march, but that putting those officers in full riot gear or having them stand with batons conspicuously exposed might be provocative under the circumstances.  Riordan made no explicit promises but indicated that if we kept our people in line there would be a kind of truce.  I got the distinct impression that higher-ups had already decided to try to avoid more bad national press. 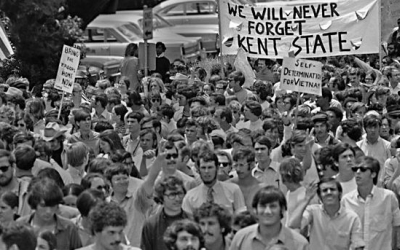 A peaceful Kent State student strike march much like the one in Chicago.


All during this period, although I was known to be a Wobbly, I was not acting in any way as a representative of the union.  I did inform the Chicago Branch of developments and the branch decided to participate in the march.  That Saturday rather than joining other “leaders”—and I use that term in the loosest possible manner—in the front of the march or joining with Columbia or Kendall college contingents, I marched as a rank-and-file member of the IWW behind our black and red banner.  Although riot equipped police were on hand, they were kept largely out of sight.  Officers lining the route wore standard blouses and soft caps.  Their batons were kept under their coats.  The march and rally went off without a serious hitch or any violence, which is more than can be said of marches in other cities.

Later, I reported on the events in the pages of the Industrial Worker.