The Seed and I a Murfin Memoir —Seedling Life 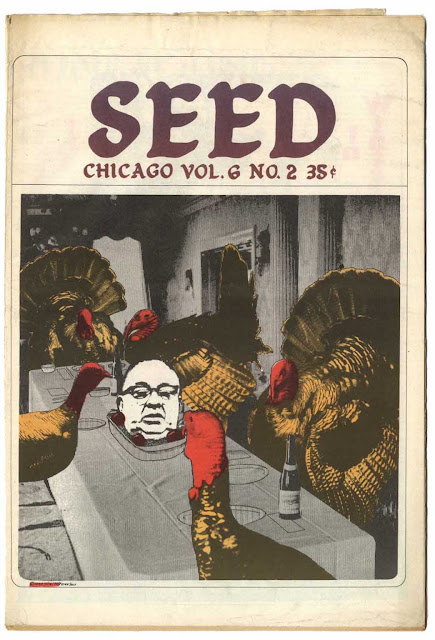 The Seed never tired of sticking it to Mayor Daley as in this 1970 Thanksgiving cover.

Although 1972 was an election year the Seed payed relatively little heed to electoral politics.  Staff collective members of flower power, Yippie, Marxist, anarchist, or Women’s Liberationist bent all disdained electoral politics as means of revolutionary change.  The still ongoing War in Vietnam had been prosecuted by Democrats and Republicans alike and the anti-war faction of Democrats did not seem strong enough to change that.  Persecution and repression of the left, especially of the Black Panthers and the American Indian Movement continued.  On the local level, we were united by our hatred for Mayor Richard Daley, his Democratic Machine, and the Chicago Police.

Back in 1971 as a member of the Industrial Worker staff I had helped create a four-page special insert denouncing Nixon’s wage freeze and Win (Whip Inflation Now) program as an assault on working people in general and the labor movement in particular.  The Seed also used the supplement.  It was made easier because the two papers shared a printer, Fred Eychaner’s Newsweb.  Later we shared another insert featuring the Vietnam Veterans Against the War (VVAW). 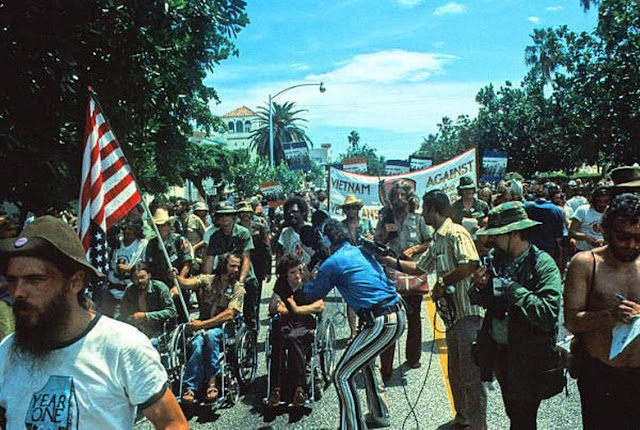 The Seed did take notice of protests and the national party conventions in 1972,  We paid particular attention to the Vietnam Veterans Against the War (VVAW) actions led by Ron Kovic because of our close cooperation with the local chapter.


The Seed did take note of the protests at both parties’ National Conventions which were both held at the Miami Beach Convention Center under ultra-tight security—the Democrats in July and the Republicans in August mostly from Liberation News Service coverage.  George McGovern’s rocky launch including his vice presidential fiasco was mocked and Tricky Dick was always a ripe target.  The break-in at the DNC Watergate headquarters was noted as more evidence of Nixonian skullduggery and pervasive spying but was not taken as a big deal until much later.  We did not much cover the post-convention campaigns then took shuddering note of the implications of Nixon’s historic Electoral College landslide.

Daley was always a target but without serious opposition beyond Bill Singers goo-goo Lake Front liberals who were often our enemies on urban renewal and gentrification issues our coverage was concentrated trials and investigations.

Despite this, I took a personal interest in the details of Democratic politics as a spectator sport.  In March or so during the primaries and before I joined the staff, I spent a long night toking and drinking with my old high school buddy  and Seedling Mike Gold spinning out scenarios about who might emerge as the nominee at the convention.  After eliminating other contenders for their flaws and gaps in support from key players I concluded long-shot Senator McGovern would get a useless nod by a process of exhaustive elimination.  If I had penned those thoughts in some more acceptable publication, I might have earned a reputation as a pundit.  But I did not and they remained in that smoky room.

That November I could not resist the lure of the polls drilled into me since my Cheyenne childhood and voted for the hapless McGovern.  But I kept damn quiet about it among both my IWW Fellow Workers and the Seed staff. 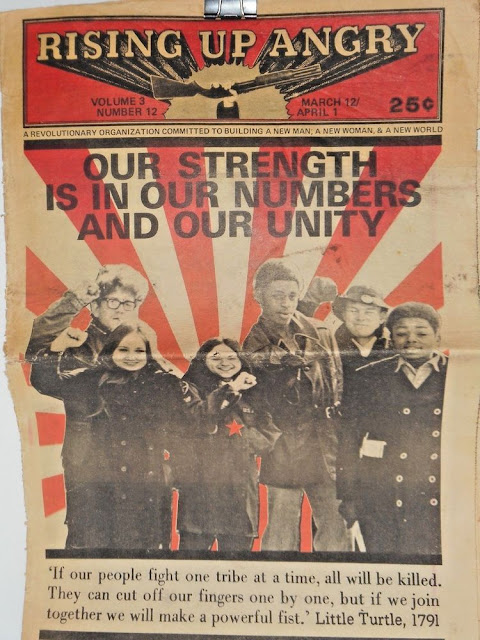 An issue of Rising Up Angry, a Seed contemporary with a different cultural and tribal focus.


The Seed was both an ally and sometimes rival of Rising Up Angry (RUA), the monthly newspaper founded by Michael James as the organ of the organization of the same name back in 1969.  James was already a veteran of the Southern Civil Rights Movement and the community organizing faction of SDS.  I first met him while lending IWW Chicago Branch support to Uptown housing protests of the JOIN (Jobs Or Income Now) Community Union out of which Angry emerged.  The organization and the paper was aimed at the alienated working class youth, primarily Appalachian White, who were sometime described as Hillbilly greasers as part of Black Panther Fred Hampton’s original Rainbow Coalition.  They were trying with mixed success to extend that base to White ethnic youth in neighborhoods who had often attacked Martin Luther King’s open housing marches, UFW Grape and Lettuce boycott pickets, and long-haired hippies.

The Seed lent RUA its light table and production facilities in its early years and then shared Newsweb’s printing. Our paper supported many of their initiatives including the Fritzy Englestein Free Clinic that was the subject of one of my first stories.  Seed vendors often also carried Angry.  But there was still some cultural tension between some staffers and street tough members of RUA.

The paper ran through 1975.  Mike James went on to co-found and lead the Heartland Café in Roger’s Park, a vegetarian restaurant, gallery, event venue, hang-out, and community center that was in institution until it closed in 2018.  He and Katy Hogan broadcasted Live from the Heartland radio talk show every Saturday from the restaurant.  That show continues even after the Café was razed.  James also became a progressive Democratic activist and eventually 49th Ward Committeeman.  He was a strong backer of Lori Lightfoot in the last mayoral election.  A man of many interests he assemble photographs spanning decades in his Pictures from the Long Haul, No.’s 1 & 2 and frequently sells prints on weekends from his front porch Prairie Dancer Front Porch Gallery.   Mike joined former Seed staffers at our 2017 50th Anniversary Reunion.

Alice's Revisited was downstairs from the Seed office.  We mingled easily with their staff collective.  Note the coming attractions advertised with hand made posters in the window.


The Seed and our downstairs neighbor Alice’s Revisited had a shared, almost symbiotic relationship.  Both were collectively managed and recognized as IWW co-op job shops.  Alice’s was naturally a Seed hang-out and the staffs of both mingled socially and sometimes shared digs.  Some Seedlings picked up hours at the restaurant.  It was old-school hippie cool with a laid-back atmosphere and a vegie menu.  In the evenings it doubled as a music venue not only featuring local rock groups like Wilderness Road and the Rawl Hardman Group, but legendary bluesmen Muddy Waters and Howling Wolf.  Both of those while still stars in Europe had been bypassed by changing tastes in Black Music and had to work day jobs between gigs at dwindling South Side blues bars.  They played to packed houses at Alice’s which helped bring them to new white audiences.  The brightly lit, non-alcoholic venue and it long-haired audiences must have seemed strange to them at first.

But something strange happened.  Some one or some folks from Alice’s did something that some Seed staffers considered uncomradely or counter-revolutionary.  I have no memory of the alleged offence and I bet that after all this time no one else does either, but it blew up into a crisis seemingly overnight.  The issue was aired in the paper and some Seed staffer organized a noisy and rowdy protest of 50 or more outside the restaurant trying to shut it down.

I was still convening weekly community meetings at the Wobbly Hall on Wednesday nights and the issue was taken there for communal adjudication.  I don’t recall the results, but the protest and boycott were called off.  But things were never quite the same afterward.

Advertising sales at the Seed were dwindling.  Record labels and tour promoters were abandoning local underground papers for the national Rolling Stone which was reaching pretty much the same audience.  Local music venues and promoters as well a local business were shifting their ad dollars to the Reader with its much larger free distribution.  At one point a small Rid Lice Killing Shampoo was the only national ad left in the paper.  To keep the ship afloat benefits were organized at the Wobbly Hall which often hosted similar events for the likes of the UFW Boycotts, VVAW, the Chicago Women’s Liberation Union and other groups.  One Seed benefit was headlined by Wilderness Road, a movement band led by former Yippie Warren Lemming that was looking to break out nationally. 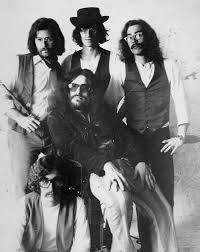 Wilderness Road, a politically progressive rock band led by Warren Lemming was a fixture on the scene.


Wilderness Road also had their first album launch concert at the Hall attracting the attention of the mainstream media as well.   Thanks to Mitch Lieber I got my first and only name drop in John and Abra Anderson’s Chicago Sun-Times gossip column as one of the “celebrity” attendees.

Back at the Seed I found myself somewhat isolated when I began to complain about certain rhetoric, especially spelling America as Amerikkka which I thought made it almost impossible to reach out to working class readers.  Perhaps unconsciously some staffers had fallen into the habit of stereotyping white working class men as Joe from the 1970 Peter Boyle film in which a working class dad goes on a rage-filled hippie killing rampage or as ignorant, racist Archie Bunker types.  If such folks were the enemy, why should anyone bother to reach them?  The revolutionary rhetoric, much of it borrowed from the Black Panthers had so much more appeal.

But my Wobbly heart told me that no revolution could succeed without all of the working class.  I got little or no support for this position and the language continued to be routinely used.

Next—A Final Exit and After.

Posted by Patrick Murfin at 8:58 AM