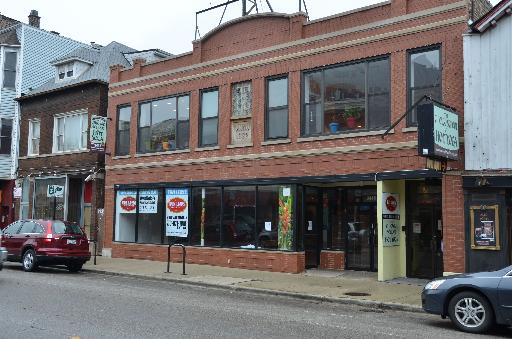 In 1970 IWW General Headquarters and the Chicago Branch moved into the spacious second floor former bowling alley at 2440 North Lincoln Ave.  The Hall quickly became a busy community center.  An A&P market occupied the first floor and then Uncle Dan's Army Surplus.  The storefront to the right was The Head Shop which became Wobbly shop.

About the same time IWW General Headquarters was urban renewed out of its longtime offices on Halsted Street.  We moved just a hop away, to an old second floor bowling alley above the A&P market at 2440 North Lincoln Avenue directly across from Biograph Theater.  With the lanes removed we had a spacious hall which immediately became a community center.  Not only did all sorts of organizations meet there, but benefits were held almost weekly featuring the top rock, blues, and folk acts in Chicago.  The Seed, various defense funds, the Vietnam Veterans Against the War (VVAW), women’s groups, and health clinic were just some of those who used the building.

At some point weekly community wide meetings began to be held every Wednesday night.  I was the Chicago Branch Secretary and was asked to be the facilitator of the sessions.  Up to fifty people representing organizations, local businesses, and individuals showed up every week and sat in a wide circle on folding chairs exchanging information of activities, planning actions, and occasionally hashing out community disputes.  The Seed was always well represented.

The hip street scene had shifted north from Old Town up Lincoln Avenue where rents—at least temporarily—were cheaper.  On its southern edge were two blocks that included cultural hot spots—The Body Politic Theater where the Organic Theater was launching the first wave of the new Chicago theater scene and the space over the Oxford Pub where William Russo’s Chicago Free Theater was presenting his ground breaking multi-media Rock Cantatas like The Civil War and David to sold out house every week.  Across the street the Wise Fools Pub was brining Southside Blues to the Northside.  The Fools would open their own theater space upstairs soon which would give birth to a little musical called Grease.

The Oxford—a sprawling joint with food service and a four o’clock license was a popular watering hole as was John Barleycorn with its dark ambience, classical music, and art slide shows.  But it was a plain old neighborhood tavern operated by a pretend gruff Austrian named Johnny Weiss that became the main hangout for Wobblies, Seedlings, and street people with its two dollar pitchers of beer, 35 cent schooners, and frequent free shots of Jägermeister for favored regulars.  The juke box played big band standards, polkas, Edith Piaf, Marlene Dietrich doing both Lilly Marlene and Where Have All the Flowers Gone, but also, if you listened carefully the The Horst Wessel Song.   Around those tables there was much debate, raucous laughter, and bonding.

Up the street north of Fullerton the Seed and the IWW hall were two anchors of the street scene.  But there were others.  The Biograph was playing mostly second run films but developed cult following for weekend midnight shows that featured The Rocky Horror Picture Show in a double bill with either A Thousand Clowns or later Harold and Maude.  Crowds in costume would line up around the block and sing along with film inside.  Across the street the Three Penny Cinema was an art house and one of the few venues of foreign films in the city. 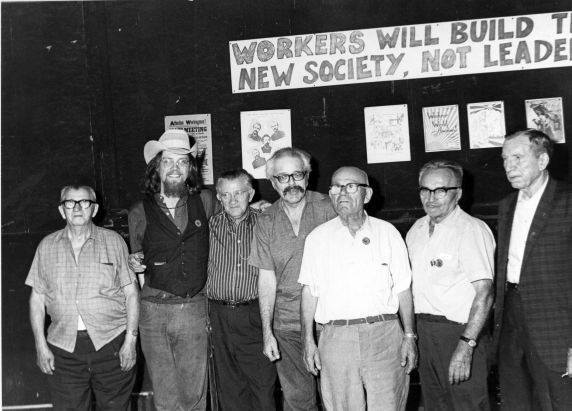 I was a in full Hippie at the first IWW convention in the Lincoln Hall.  Seen here with Carlos Cortez, center, and the stalwart Hungarian contingent.


The Headshop was located in a storefront just north of the Wobbly Hall and was operated by a massive bearded Episcopal Priest.  In addition to pipes, papers, and posters the shop also offered bright red and gold Mao buttons, plastic covered Little Red Quotations from Chairman Mao, and other revolutionary regalia.  A block further north was the Guild Bookstore, a purveyor of all sorts of radical books and publications and another meeting place.  The Feedstore and the original Alice’s provided hippie fare—heavy on brown rice and tofu, later supplanted by the more hip capitalist Ratso’s.  Alice’s Revisited opened under the Seed offices to fill the hippie food gap and also became a vital community center and a music venue that presented acts like Segal Schwall Band and bluesmen like Muddy Waters.

The IWW was such a presence in the area that a number of local establishments became Wobbly shops, mostly under the provisions for cooperatives.  When the Seed reorganized its self into a staff collective the members approached me as IWW Branch Secretary and I signed them up.  They were an official IWW shop, with red card carrying members, and the union bug on the paper for the editorial and production staff but not the printing.

In January of 1971 I began a term as IWW General-Secretary Treasurer.  I was also taking a larger role in the newly created staff collective—frankly inspired by the Seed—that put out the monthly Industrial Worker.  But when I was not working late into the night at Big Bill Haywood’s desk under the piercing blue eyes of Joe Hill portrait while nursing quarts of Blatz, I was still out on Lincoln Avenue schmoozing at Johnny Weiss’s or a half dozen other joints. 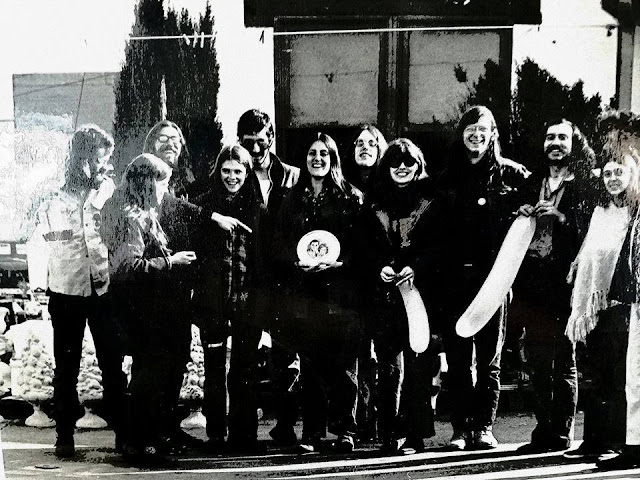 Members of the Seed Staff and friends on their way to the 1971 May Day Tribe protest in Washington.  They did not succeed in levitating the Pentagon but had adventures and some narrow scrapes.  Not shown is editor Abe Peck who needed to chill after three intense years at the helm after May Day.


By the spring of 1971 Most of the key figures of the last the years had already departed the Seed or would be gone before summer.  Graphic designer and Artist Lester Doré and others had retreated to the rural Karma Farm commune in Wisconsin.  Editor Abe Peck felt burnt out after the 1971 May Day Protests in Washington, D.C. and withdrew.  He became an editor at Rolling Stone and eventually a distinguished professor of Journalism at Northwestern University and the main historian of the Underground Press.  Eliot Wald went to work for WTTW public television where he helped create the program that eventually became Siskel & Ebert, then did Chicago newspaper work before becoming a writer at Second City.  From he jumped to New York City where became one of the original writers of Saturday Night Live.  Later he was a California screen writer and died at the early age of 57.  Marshall Rosenthal had departed for a temporary sabbatical that turned permanent.  After returning to Chicago from California he created the Reader’s Hot Type column in 1971 and then created the Panorama arts section for the Daily News eventually becoming a long time award-winning TV news writer and producer at both WBBM and WMAQ.  A raconteur and wit, he died of cancer in 2012. 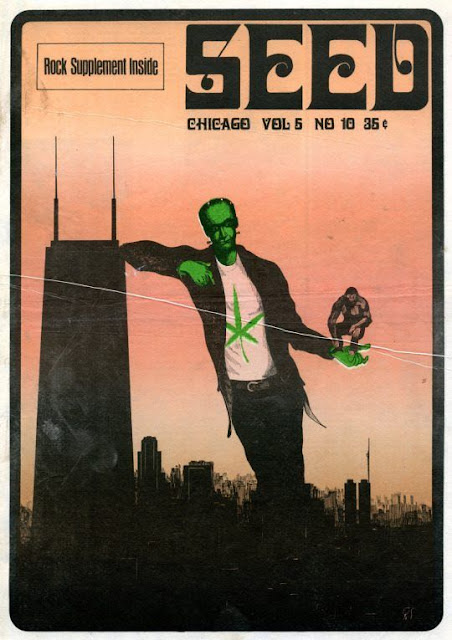 Peter Solt kept up the high standard for art and covers set by Lester Dore.


Although there were hold-overs like Peter Solt who took over art direction, and Maralee Gordon who had worked her way from setting type to being one of the leading writers and movers on the staff, it was largely a new generation in the summer of 1971.  That’s where I came in.