The Seed and I a Murfin Memoir —1972 A Wobbly Officer 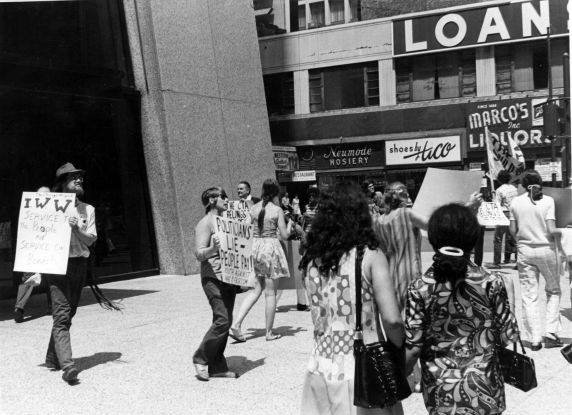 A Wobbly in action--protesting a CTA rate hike to satisfy bond holders.  The fare jumped to 35 cents and a 10 cent transfer.  I'm on the left of the picket line outside the First National Bank of Chicago, a major bond holder which pushed the CTA board.    I was Branch Secretary.  It was 1971  Note the full hippy look including a fringed sash and vest.  A photo of this demo ended up on the front page of the Chicago Sun-Times.

In January of 1972  I backed into the job of General Secretary Treasurer of the Industrial Workers of the World (IWW).  After my predecessor, Lionel Bottari, declined to run for another term, no one with the required 3 years membership in good standing filed to run in the election of officers the previous fall.  Old timers like Walter Westmann and my mentor Fred Thompson who had passed the office between them for nearly 30 years were adamant that it was time for a younger generation to take leadership in the union which was growing and more active than it had been in years.  But the pay was lousy—$75 a week—which made it difficult for anyone with family responsibilities to take the job or those from outside Chicago to uproot their lives.

I was then Chicago Branch Secretary and supporting myself at various odd jobs including offset pressman, custodian, and cook.  I actually spent most of my time at the office and hall on Lincoln Avenue that the Branch shared with General Headquarters.  I lived right around the corner on Montana Street with Cecelia Joseph, who I had met during the Three Penny Cinema Strike a year before.  I thought I could do the job, but had joined in the summer of 1969 and was not eligible to run at the time of the election.  Instead, I ran for the General Executive Board with the understanding that the GEB under the by-laws would fill the vacancy by appointment.

So at age 22 I settled in behind Big Bill Haywood’s enormous old desk with an oil portrait of Wobbly bard and martyr Joe Hill staring down on me from the wall opposite my chair.  Luckily, I had help.  One-legged, snaggle-toothed Walt Westmann with years of experience and a bemused attitude toward the scraggly whipper-snapper in a cowboy hat who was suddenly his boss stayed on was bookkeeper, sparing me from responsibilities wildly outside my capacity and experience.   Fred Thompson came by almost daily and was willing to share is wisdom and experience and he fielded the many inquiries we got concerning the IWW’s dramatic and colorful history.  Industrial Worker editor Carlos Cortez with whom I worked closely came by every afternoon after his shift “at the bubble factory” loading box cars and semis with cartons of shampoo and soap products.  Other veteran members Charley Velsek and his wife Jenny helped every month with the big jobs of wrapping, sorting, and bundling the Industrial Worker and the General Organization Bulletin for mailing. 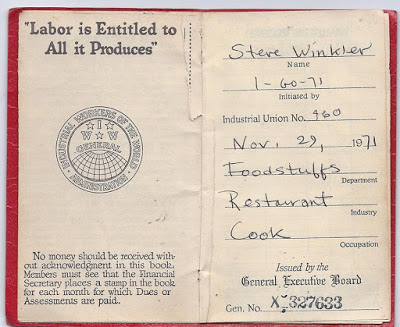 Much of my time was spent issueing new membership cards like this one, pasting dues stamps in books sent into the office, and posting the reports of Delegates.  This card was issued in November 1971 by Godard C. Graves--1-GO-71--who completed my term as General Secretary after I resigned.

But for a union with less than a 1000 members in good standing in the U.S., Canada, Britain, Australia, and Guam, the workload was staggering.  In inherited a large cardboard carton of back correspondence to answer.  That included reports from branches and delegates with monthly reports on dues collections, red membership books sent directly to Headquarters to get dues stamps and assessments, literature orders, complaints about poor service, diatribes against us dammed bureaucrats, etc.  I turned over dues records, checks and cash to Fellow Worker Westmann and worked quickly fill literature orders, changes of address and new subs for the IW, and other service requests.  About half of the mail was letters of general inquiry, each specific enough to require an individual reply and with an enclosure of some introductory material and a sample IW.  Most of my day was filled with diving into that box and banging out replies on an old Remington manual typewriter.

I also had to keep up with the workings of the General Executive Board which met by mail and to which I had to supply answers to questions and a monthly report.  I also had to, as I described it at the time, “piss on fires" ignited by certain contentious and combative GEB members which were always threatening to disrupt the Union with some brouhaha or another.  This required using seven layers onion skin and carbon paper in my typewriter and pounding the keys hard enough so that the last copy was at least faintly visible.  Every month my usually lengthy report to the membership, the summary report by the GEB chair on its activities, reports from branches and delegates, letters from members, and material relating to union elections and referenda had to be typed onto stencils and run off on the pre-World War I open drum, hand cranked Mimeograph machine.

The Industrial Worker masthead during my term and for decades before.  The red color indicates that this was probably from a May Day issue.


I also wrote for the IW and worked on paste-up and the mailing process which required stamping yellow wrappers on the old Addressograph machine, rolling each paper in the wrapper and sealing it with library paste from a pot, gathering them in bundles by Zip Code, and finally finding someone with a car to help me haul the mail bags to the old central Post Office downtown.

In between all of this, there were a steady stream of visitors and the curious, just as I had been when I first visited the former office on Halstead Street during the 1968 Democratic Convention protests.  In memory of that, I always took time with each visitor.

All in all, I was working 10 hour days six days a week and often had Chicago Branch meetings and activities in the evening.  Yet my work style raised some eyebrows.  Instead of coming in at 8 pm when Walt Westmann punctually opened the office, I drifted in between 10 and 11 am but often stayed as long as midnight.  I worked with quarts of Meister Bräu or Blatz on my desk.  I could get either for three quarts for a dollar at Consumer Liquors just down the block.  I could go through all three in a long day.  Once in a while a Fellow Worker would stop by and we would repair to the rear fire escape overlooking the ally and share a joint.  I ate lunch most days at the Woolworth’s Luncheonette also on the block where I flirted with a young waitress.  After work I would blow off steam with shots and beers at Consumers Tap or a couple of blocks south on Lincoln at Johnny Weiss’s Tavern, which explains the late morning arrivals.

I also kept up with Chicago Branch meetings, and other activities, as well as various committees and community events like the weekly Wednesday community meetings that I still facilitated in the Hall.

That was my life for six months until another weekly chore tripped me up.  Every Friday I took all of the week’s receipts—cash and checks, not credit cards accepted then—to the bank for deposit.  Aetna Bank on Halstead just across the street from the former Wobbly Hall was just half a block away and would have been convenient.  But we were loyal to the Amalgamated Bank in the Loop because it had been founded by the Amalgamated Clothing Workers and other unions.  Although it had passed into private hands, it was still considered Chicago’s labor bank and handled accounts for almost all unions in town.  That meant taking a thick envelope stuffed with bills and checks downtwn by catching the L the Fullerton stop and walking a couple of blocks from a State Street subway station.

Most of the time I carried the envelope safely in the inside pocket of a corduroy sport coat I wore regularly and under a thick top coat in cold weather.  But by late June Chicago the city was in the grips of one of its patented, stiffening heat waves.  This particular Friday the thermometer was pushing 100̊ and the humidity wringing wet—more like the Dog Days of August than early summer.  Without a jacket, I put on my straw cowboy hat, and stuffed the receipt envelope into my left rear jeans pocket where it stuck out like a flag.  I waved to Walt Westmann on the way out and headed over to the L.  My plaid shirt with the sleeves rolled up above the elbow and the red kerchief I wore around my neck were both drenched by the time I got there.

I had to get to the bank by 3 pm.  In those days banks closed for business at that hour and would not reopen until 10 am Monday. 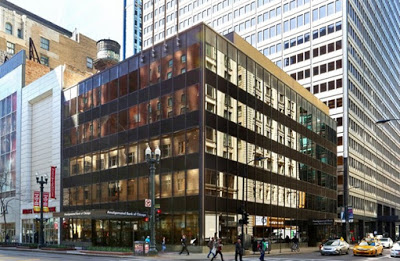 The Amalgamated Bank on South State Street was the labor bank where the IWW kept its accounts and where I made weekly Friday deposits.


In the Loop you could see the heat waves rising from the streets and sidewalks as I made my way to the bank day dreaming about stopping for a nice cold beer at Miller’s Pub when I was done with business.  At the bank I joined a long line, many of the customers, like me, with their union’s receipts.  I finally got up to the teller’s cage about a quarter to 3 and reached for the envelope in my pocket.  It was gone!

I was in an immediate panic.  I didn’t know if the envelope had simply slipped out of the pocket on the street or in the CTA car or if some sharp eyed pickpocket spotted it.  Either way, it was gone.  I rushed out of the bank in a frenzied effort to retrace my steps, hoping against hope to find the envelope lying neglected on the sidewalk.  Of course, it was gone forever.

I arrived, utterly dejected back at the office just as Fellow Worker Westmann was getting ready to go home for the day promptly at 3:30.  I explained what had happened.  He could see how upset I was and was very comforting.  “These things happen, Fellow Worker,” he told me.  But I was guilt ridden.  I felt I had committed malfeasance of office by careless neglect.  I should have held the envelope tightly in my hands the entire trip or carried it in a secure bank bag like most of the other union reps in the teller line had.

Alone in the office that night, I typed out in the necessary multiple copies, my immediate resignation as General Secretary Treasurer.  It was accepted with expressions of regret.  No one ever accused me of taking the money and no charges were drawn up or an investigation launched.  My explanation was taken at face value.

The following week Goodard Graves, Chairman of the Executive Board, arrived from Champaign, Illinois to finish out the second half of my one year term.

Suddenly, I was at loose ends with no immediate prospects and in immediate need of a job to pay my half of the rent and my bar tabs.  What was I to do?

Next—I walk up the street to the Seed office.