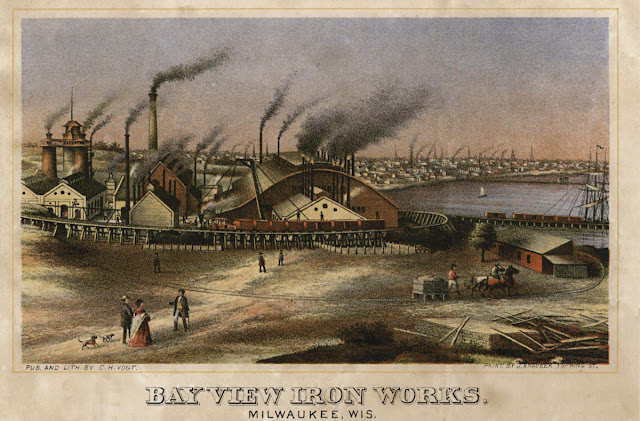 The massive Bay View Iron Works was the largest industrial plant in the Milwaukee area and the target of Eight Hour Day strikers on May 5, 1886.

The first week of May 1886 all eyes were on the dramatic events in Chicago—the general strike for the 8 Hour Day on May 1, the confrontation and shooting of strikers at the McCormick Reaper Works on the 3rd, and the attack on the Haymarket protest rally by Chicago Police during which a bomb was thrown.  But just up Lake Michigan and over the Wisconsin state line, the class war was also on—and deadly.

Seven thousand building trades workers, many of them, as in Chicago, skilled Germans enthusiastically joined the call for the national 8 Hour Day Strike called by the Federation of Organized Trades and Labor Unions (ancestor of the American Federation of Labor.)  They were joined by more than 5000 Polish laborers, mostly unskilled recent arrivals, who organized at St. Stanislaus Catholic Church.  Some were members of the Knights of Labor, but most were unaffiliated.  It was a rare act of solidarity between skilled and unskilled labor and between ethnic groups often seen at odds with one another.

May first that year was a Saturday—a regular work day.  The strike was a success and roaming crowds of strikers called out various shops in the course of the day, usually succeeding in emptying them.  The strikers vowed to keep up the pressure and to march on Milwaukee’s largest employer, the Milwaukee Iron Company rolling mill in Bay View, an independent village just south of the city’s downtown on the shores of Lake Michigan.

Hearing of the plans on Sunday Republican Governor Jeremiah M. Rusk called out the National Guard with explicit and highly publicized orders to “shoot to kill” any strikers who attempted to enter the iron mill. 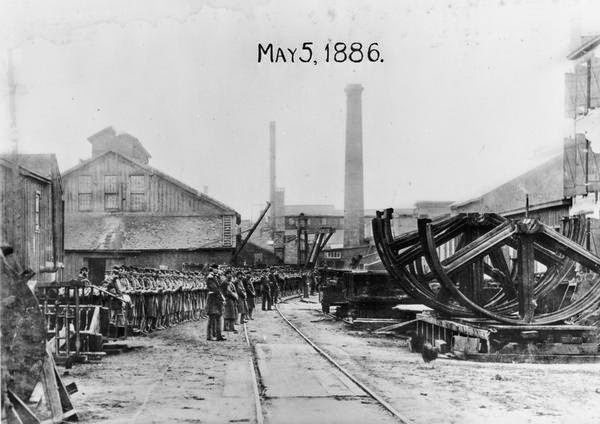 None-the-less on Monday an estimated 14,000 strikers marched on the mill where they were met by 250 Guardsmen arrayed in battle formation in front of the gate.  There was a tense stand-off, but strikers did not try to rush the gates.  Instead they announced their intention to stay and established a camp near-by.  On Tuesday the camp was swollen with new recruits and many families including wives and children.  In an act of defiance the Kosciuszko Militia, an armed and drilled unit of Poles, including veterans of European armies arrived with the avowed intention of defending the strikers.

By early Tuesday morning, May 5, word of the events at the Haymarket in Chicago reached Milwaukee.  Tensions were mounting.  Their officers warned the Guardsmen that anarchists were coming to kill them.

About 1,500 strikers and their families left the camp to march on the mill, determined to call the workers there out on strike no matter what the cost.  The Guard formed in skirmish lines at the top of a small hill in front of the main gates.  As the crowd got to within 200 yards of troops, an officer ordered them to come no closer.  After a moment of indecision, the crowd pressed forward anyway.

Without further warning, the Guard opened fire.  This was not the raged fire of strike breakers and police with pistols that had resulted in deaths at the McCormick Reaper Works or the panicked wild and indiscriminate fire of the police at the Haymarket after the bomb.  These were disciplined volleys of fire directly into the tightly packed ranks of the strikers.  After the first rank got off their volley, just as they were drilled to do, the second rank stepped through the line and fired a second volley.

The first round tore into the crowd stopping it in its tracks, bodies fell.  Then a wild stampede for safety.  The second volley tore mostly into the backs of the fleeing workers.

When the smoke cleared there were 7 bodies, including a 13 year old boy littered the ground and dozens of the injured writhed in agony.  The maimed were eventually retrieved by their comrades.  The exact number of injured, both from gunshot and those trampled in the flight, has never been established because few sought medical attention fearing arrest.

The shooting did effectively end the strike and protests.  The Guard patrolled the city and suburbs for some days, aggressively breaking up knots of workers who might gather.  Most went back to work.  Identifiable leaders found themselves blacklisted. 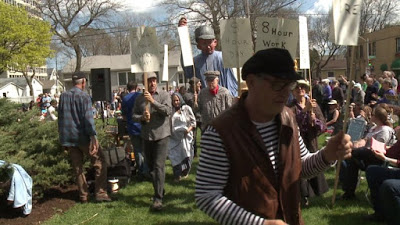 In 2019 the commemoration of the Bay View Tragedy included reenactors and giant puppets.

But the memory of that awful day burned itself into the memory of Milwaukee’s working class.  In subsequent years it would become a hot bed of Socialism and one of the most heavily unionized cities in the United States.

On the centennial of the event, a historical marker was erected by the Bay View Historical Society and the Wisconsin Labor History Society near the sight of the Iron Works.  A commemoration is held annually on the Sunday closest to May 5.

But the echoes of that day are not just historical.  In early 2011 newly elected Governor Scott Walker announced his sweeping program to attack the bargaining rights of Wisconsin public workers.  Realizing that his plan would provoke a strong reaction—and likely public service strikes if it was implemented, the swaggering governor told the press that he was if public employees dared protest or “cause disruptions” he was fully prepared to mobilize the National Guard against them.  That brought memories of the so called Bay View Tragedy to the fore again and was in no small measure responsible for launching the months of massive daily protests at the state capital. 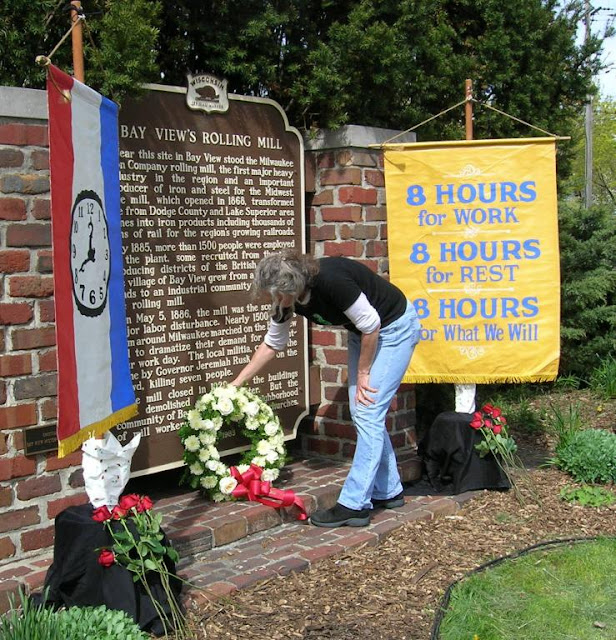 Laying a wreath at the Bay View historical marker.

As William Faulkner once pointed out, “The past is never dead. It’s not even past.”