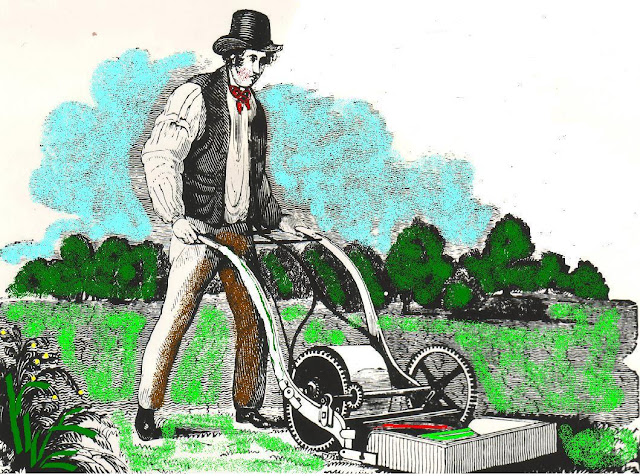 On May 18, 1830 an English textile worker and tinkerer Edwin Beard Budding patented the first mechanical lawnmower.  He based his design on a velvet sheering device at his mill.  Blades mounted on a cylinder rotated as the machine was pushed sheering grass against a stationary blade.  It could be pushed by a strong man and also had an auxiliary handle so it could be pulled by a second. 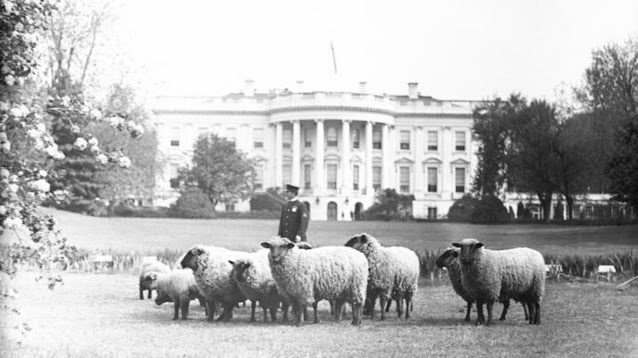 The great lawns of estates in Britain and the U.S. were often kept trimmed by sheep like these employed by the White House in the early 20th Century.

While functional, his device was cumbersome and heavy, too expensive for the middling classes and not worth the investment by the grand owners of country estates who could rely on legions of gardeners with scythes and sheep to keep their sweeping lawns under control.

Forty years later American Elwood McGuire patented a simpler, lighter weight reel machine that could be mass produced and sold at reasonable prices.  By 1885 50,000 push mowers were being sold annually in the United States.  This caused a revolution in home landscaping. 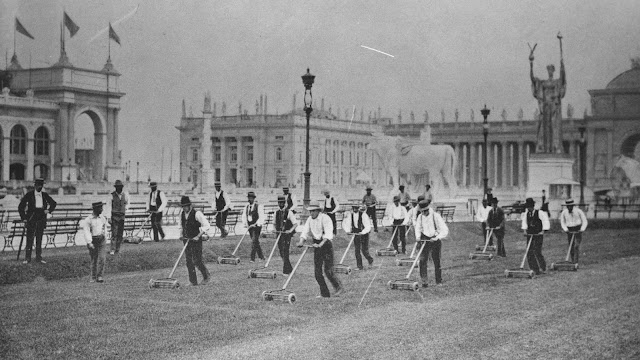 A small army of groundskeepers and their push reel lawnmowers kept things tidy at the World Columbian Exposition in Chicago in 1893.

Previously front yards had often been small, weedy and often simply trampled ground apt to turn seasonally to mud or dust while back yards were reserved for home gardens and livestock.  Both were typically surrounded by high wooden fences so the neighbors couldn’t complain.  First front yards, then rear ones were transformed into lawns in imitation of the estates of the wealthy but on a much more modest scale. 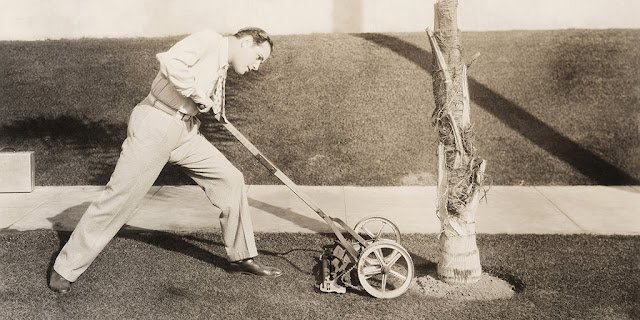 Stockade fences came down to be replaced with picturesque pickets or decorative iron.  As long as husbands, sons, or help could be relied on for a couple of hours a week, middle class women could enjoy a new feeling of enhanced status.  But lawns in cities, small towns and the emerging suburbs alike continued to be modest in size because pushing the mower was still a lot of work.

Enter the back yard tinkerers who spent decades trying to effectively mount an engine on the mower.  Most tried mounting heavy steam or gasoline powered motors to existing reel machines.

The breakthrough came in 1919 when Colonel Edwin George mounted a new light 2-cycle engine perfected during the First World War on a platform directly driving a rotating blade spinning parallel to the ground. 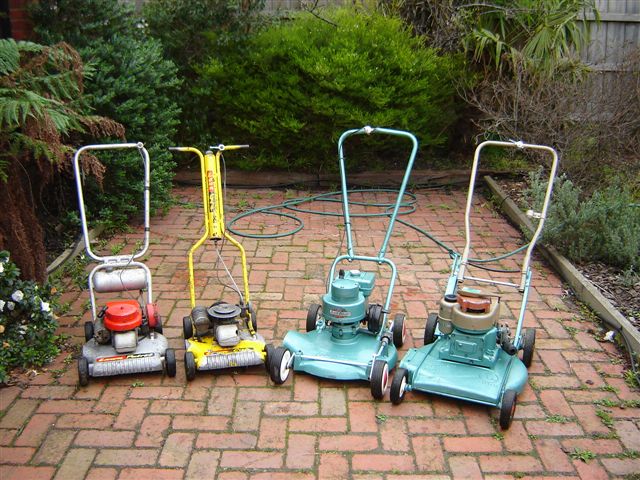 The new power machines did not really catch on in large numbers until the explosion of suburbia after World War II.  In fact a good argument can be made that the leap to large lots that characterized the post-war suburban boon would have been impossible without them.

To accommodate ever expanding suburban and exurban lots, garden tractors with mower decks and other riding machines grew steadily in popularity  in the late 20th Century.  Now they are even seen in much smaller yards—toys for home owners.  And increasingly lawns of all sizes are now attended to by professional landscapers zipping around on speedy machines that can turn on a dime. 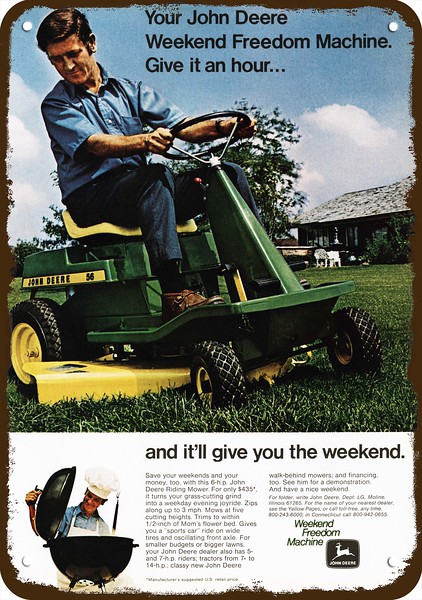 In 1971 John Deer promised more leisure time for the masters of subdivision estates.

Now power mowers are a major source of air pollution in many areas and modernized push mowers have made a modest comeback among the ecologically minded and mindless fitness enthusiasts.

But this writer, whose muscles still ache from the memory of doing the quarter acre lot on Cheshire Drive in Cheyenne with a cranky push mower, still uses Col. George’s improvement—and relies on a trusty Granddaughter Caiti and her husband Paul to do the job now that I am officially banned for medical reasons from doing it myself.