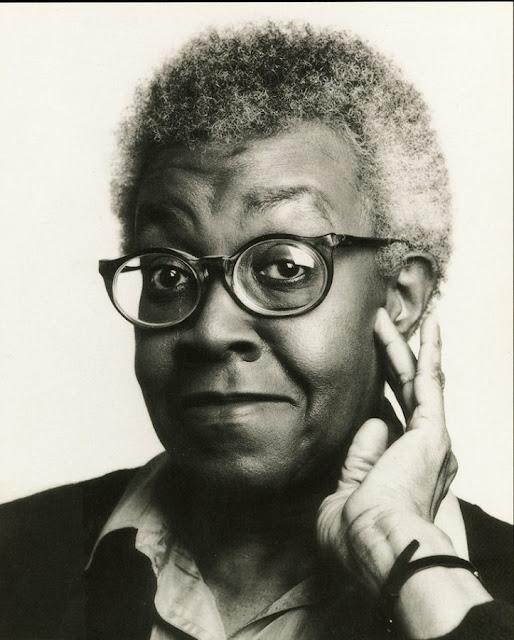 With the notable exceptions of Langston Hughes and Maya Angelou no Black poet has been more widely read and admired than Chicago’ own Gwendolyn Brooks.  She won a Pulitzer Prize in Poetry in 1950; was appointed Poet Laureate of Illinois in 1968, a position she held until her death 32 years later; and was Poet Laureate Consultant in Poetry to the Library of Congress in 1985 and 86 term. In 1976, she became the first African-American woman inducted into the American Academy of Arts and Letters and in 1995 was awarded the National Medal of the Arts.  In addition to these honors her hometown has commemorated her in countless ways.

But since her death in 2000 at the age of 83 her actual words and works have been obscured and her image softened likely due to all of her photos as a smiling, bespeckled, and kindly looking senior.  People forget that she was a girl with big dreams who could only climb to a position as a typist after getting a two year degree at Wright Junior College.  Although the office work she did for years was a step up from the jobs as a domestic, cook, or laundry drudge which were most commonly available to Black women, she felt the sting that it was “the best she could expect.” 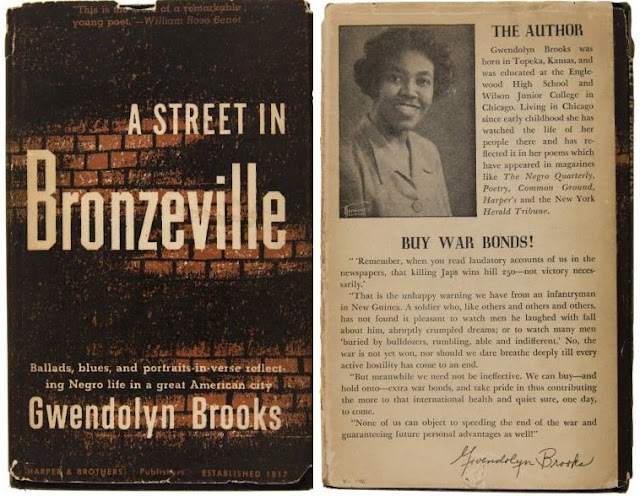 And people forget how she spent her evenings in Brownsville at jazz clubs and at the Black underground poetry house parties that the White cultural elite did not even expect existed.  She absorbed the creative energy, rhythms, and daring experimentation of Black culture.

Brooks defiantly embraced and expressed Blackness.  She encouraged the younger poets who she mentored to do the same.  Today’s hip-hop, poetry slam, and spoken word black artists owe her more than most even suspect.

A tip-o’-the-hat to my friend and former Chicago chanteuse and actress Trish Schaefer for sharing this remarkable assertion of identity. 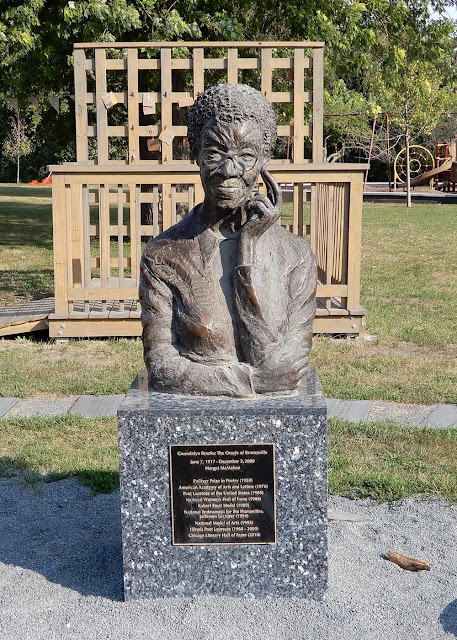 This memorial to Brooks overlooks  the playground of the Bronzeville park named for her.


The Sermon on the Warpland

“The fact that we are black

is our ultimate reality.”—Ron  Karenga

And several strengths from drowsiness campaigned

but spoke in Single Sermon on the warpland.

And went about the warpland saying No.

“My people, black and black, revile the River.

Say that the River turns, and turns the River.

Say that our Something in doublepod contains

seeds for the coming hell and health together.

the bruising; the collapse of bestials, idols.

But then oh then! -- the stuffing of the hulls!

the seasoning of the perilously sweet!

the health! the heralding of the clear obscure!

Build now your Church, my brothers and sisters. Build

never with brick nor Corten nor with granite.

Posted by Patrick Murfin at 9:13 AM