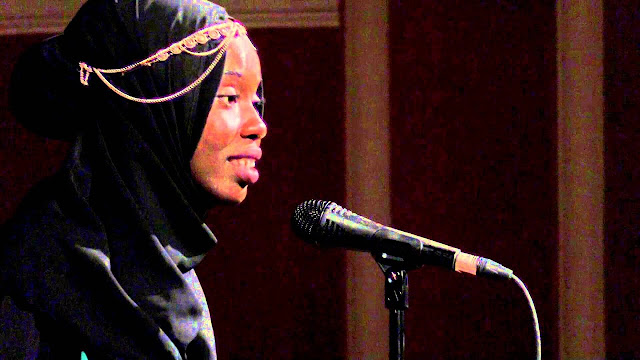 When this blog first took notice of Emi Mahmoud for our National Poetry Month series in 2016 she was a  Yale senior who was born in Darfur in Sudan.

Her parents were writers who were displaced by the genocide in that country.  When she was a toddler they fled to Yemen and then to the U.S. in 1998.  Her parents worked to raise awareness of the genocide.  At first, she told an interviewer for YaleNews, her parents tried to shield their children from the grim reality.  But she became curious about what they were doing, “When I insisted they tell me, they did. I just picked up a pen and started was soon composing verse for the cause.”

Although she was an experienced writer who had dabbled in poetry, Mahmoud was completely unfamiliar with the world of spoken word performance art that had percolated up from coffee houses, smoky saloons, and even street corners carrying on the traditions of beat poetry, infused with hip-hop and rap, and the self-conscious avant gurde art scene.  It was a poetry alternative to the literary/academic establishment with its little magazines and fading connections to the broader culture.

It was somewhat of a struggle for her to enter that world and to gain confidence as a live performer.  But when she did there was no stopping her.  By 2014 she won the crown at the Individual World Poetry Slam Championship (iWPS).  Video of that performance and others went viral. 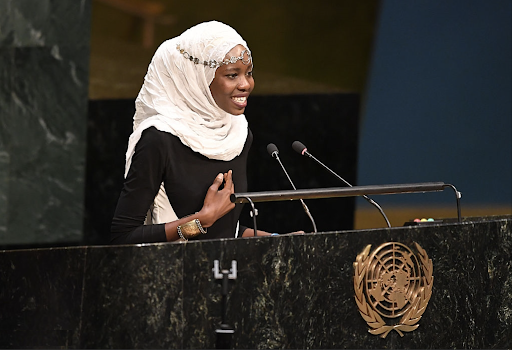 After that there was no stopping her.  Mahmoud was on the BBC’s  list of The Most Inspirational Women Across the World in 2015, and she was invited to a 2016 roundtable with President Obama, when he visited the Islamic Society of Baltimore.  That same year she was invited to recite one of her poems at the United Nations General Assembly in New York, launched a campaign at the Laureates and Leaders Summit in New Delhi, and gave a talk at the TEDMED conference.

In 2017 and ‘18, Mahmoud took part in the How to Do Good speaker tour, performing poetry and discussing her advocacy work in New York, Oslo, Stockholm, The Hague, Brussels, Paris, London, and York in.  She was the opening speaker at a TEDxTalk in Kakuma refugee camp in Kenya in 2018. She remains in demand at events around the world and has a huge You Tube following. 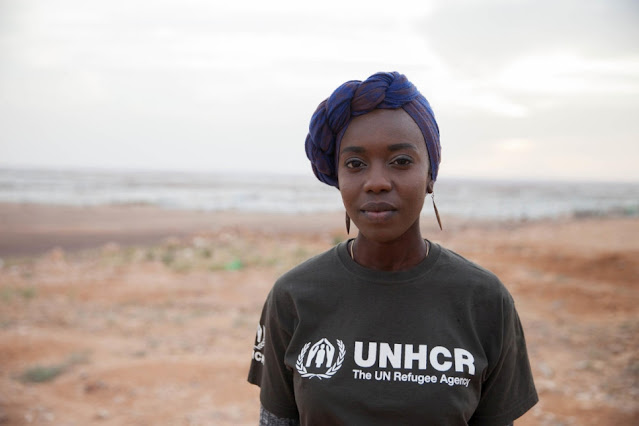 Mahmoud visiting a refugee camp as a Goodwill Ambassador  of the UNHCR.

Mahmoud’s poetry is best experience in performance.  She Tweeted this about her participation in a conference on The Seven Stages of Grief During Coronavirus.

A couple of months ago, I sat down to write about the pandemic when it was still the most pressing thing on our minds. I couldn’t shake the feeling that for some of us, crisis is all too familiar, for some of us, the world has ended many times. It continues to end every day. That sentiment still rings true today, if anything, it’s even more appropriate now. And I’m happy to now be bringing this to life through UNHCR [United Nations High Commissioner for Refugees] for World Refugee Day—it’s been an honor to work on this project with the UN Refugee Agency.

There is no alternative but to decide to care, there is no alternative but to decide to do our absolute best in changing our world for the better in every way possible and that starts with centering the people most affected in our push against disparity, inequality, oppression, and violence in all its forms. In America that looks like standing up for black people and standing up against injustice, and refugees are included in that sentiment in every way. What does it look like where you are? And how will you include #refugees ? Sending love and joy and the hope and the dream—the goal, that we carry one another through this.  I hope this inspires you, I hope it offers solace, I hope it drives you to support the most vulnerable people, wherever they may be, this world refugee day and every day after ❤️ finding strength in solidarity #withrefugees

Here is the video she made  for that occasion.