Grace Paley in her middle years--a writer and an activist.

Grace Paley authored three acclaimed collections of short stories, which were compiled in the Pulitzer Prize and National Book Award finalist The Collected Stories in 1994. Her stories hone in on the everyday conflicts and heartbreaks of city life, informed by her childhood in the Bronx.

Beyond her work as an author and university professor, Paley was a feminist and anti-war activist, who described herself as a "somewhat combative pacifist and cooperative anarchist." But she was also a poet who in her later years was selected as Poet Laureate of Vermont in 2003.

She was born Grace Goodside on December 11, 1922, in the Bronx, to Jewish parents, Isaac Goodside and the former Manya Ridnyik, immigrants from Ukraine, and socialists.  It was a secular family with her father refusing to attend temple services.  She later described herself as a bigger believer in the Jewish diaspora than in Jewish nationhood—“I was never a Zionist."

The youngest of three children by several years she reveled in the intellectual debates around the family table  and she was a member of the Falcons, a socialist youth group.  An independent spirit she dropped out of high school at 16.  She attended Hunter College in 1938-’39 and later briefly studied poetry with W. H. Auden at the New School, when she was 17. 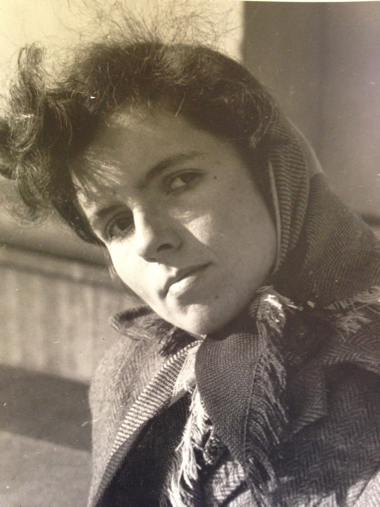 Grace Goodside at 17 by her future husband Jess Paley.


She married film cameraman, Jess Paley, when she was 19 in 1942.  For the next several years writing to a back seat to raising her two children Nora and Danny and her commitment to activism in the early second wave feminist movement and pacifist causes.

What writing she did do collected more rejection slips than acceptances. It was not until 1959 that Doubleday published her first short story collection, The Little Disturbances of Man which included several tales now considered classics.  Two subsequent collection published at lengthy intervals, Enormous Changes at the Last Minute in 1979 and Later the Same Day in 1985 continued with characters from the first book but with expanded social justice vision and inclusion of more Black and lesbian characters. 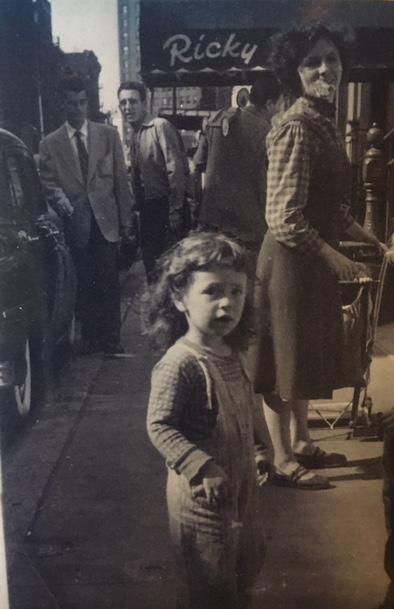 Paley with daughter Nora in Greenwich Village in 1954,

Meanwhile Paley was also heavily involved in activism. Paley was known for pacifism and for political activism. The FBI categorized her as a communist and kept a file on her for thirty years. Beginning in the 1950s, Paley joined friends in protesting nuclear proliferation and American militarization. She also worked with the American Friends Service Committee to establish neighborhood peace groups helping found the Greenwich Village Peace Center in 1961. She met her second husband, Robert Nichols, through the anti-Vietnam War peace movement.

With the escalation of the Vietnam War, Paley joined the War Resisters League.  She was arrested on a number of occasions, including spending a week in the Women’s House of Detention in Greenwich Village.  In 1968, she signed the Writers and Editors War Tax Protest pledge, vowing to refuse tax payments in protest against the War. In 1969 accompanied a peace mission to Hanoi to negotiate the release of prisoners of war.  She served as a delegate to the 1973 World Peace Conference in Moscow.  Paley and was arrested in 1978 as one of the White House Eleven for unfurling an anti-nuclear banner that read “No Nuclear Weapons—No Nuclear Power—USA and USSR” on the White House lawn. In the 1980s Paley supported efforts to improve human rights and resist U.S. military intervention in Central America and she continued to speak out in her final years against the Iraq War. 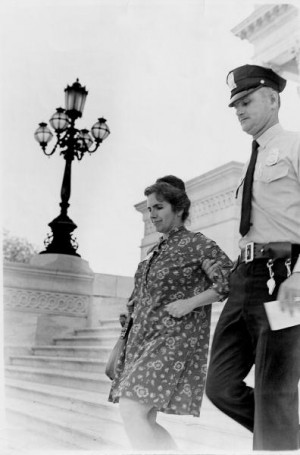 Paley under arrest again on the steps of the Capitol.


Among Paley’s many other causes was abortion rights, part of her broader feminist work. She organized one of the first abortion speak-outs in the 1960s after having an abortion herself in the 1950s and then struggling to obtain a second one a few years later.

Despite her lack of any degree Paley also had an academic career.  She began taught writing at Sarah Lawrence College from to 1966 1989) and helped to found the Teachers & Writers Collaborative in New York in the late 1960s.  Later she served on the faculty at City College and taught courses at Columbia University. She also taught at Syracuse University and served as vice president of the PEN American Center, an organization she had worked to diversify in the 1980s.

Paley's honors included a Guggenheim Fellowship for Fiction, the Edith Wharton Award Certification of Merit, an O’Henry Award in 1969 for her story Distance. She was elected to the American Academy of Arts and Letters in 1980 and went on to receive the Rea Award for the Short Story, the Vermont Governor’s Award for Excellence in the Arts. the PEN/Malamud Award for Excellence in Short Fiction, the Jewish Cultural Achievement Award. She received an honorary degree from Dartmouth University.

She also received the Robert Creeley Award in 2004, the Fitzgerald Award for Achievement in American Literature, and at Dartmouth’s annual Social Justice Awards ceremony in 2006 the Lester B. Granger ‘18 Award for Lifetime Achievement.

The Grace Paley Prize, a literary award, is now presented by the Association of Writers & Writing Programs in her honor.

Paley was a decades-long resident of West 11th Street in Greenwich Village, where she raised her children. After an amicable divorce from Jess Paley she began spending summers in Thetford, Vermont, with her second husband Robert Nichols the 1970s and couple settled there permanently in the early ‘90s. 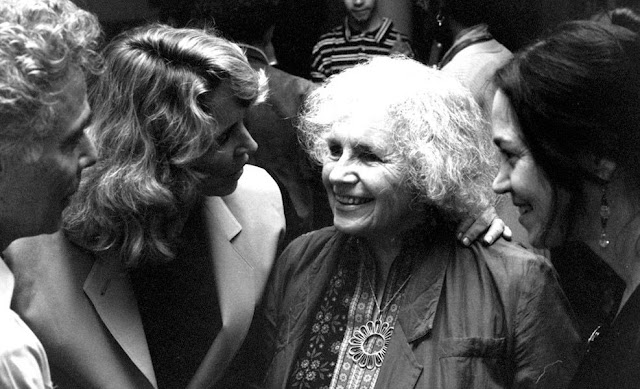 Like her short stories, much of Paley’s poetry settled on the experiences of ordinary urban Jewish women.  As one editor who worked with her wrote, ‘Her characters are people who smell of onions, yell at each other, mourn in darkened kitchens.”  She explained that she wrote what she knew—“I couldn’t help the fact that I had not gone to war, and I had not done the male things. I had lived a woman’s life and that’s what I wrote about.”

Somewhere between Greenfield and Holyoke

and a child passed through me

as a person moves through mist

as the moon moves through

a dense cloud at night

as though I were cloud or mist

a child passed through me

On the highway that lies

across miles of stubble

and tobacco barns our bus speeding

wearing the last nakedness of

childhood breathed in me

In later life her poems reflected her relentless activism like this work from Long Walks and Intimate Talks by Grace Paley and Vera B. Williams from 1991 about a peace mission to Nicaragua.

The Dance in Jinotega

In Jinotega women greeted us

with thousands of flowers roses

it was hard to tell the petals

on our faces and arms falling

then embraces and the Spanish language

Suddenly out of the hallway our

guests from the north we announce

a play a dance a play the women

fatigues they dance the Contra who

for the young teacher the health worker

(these are the strategies) the farmer

in the high village walks out into the

morning toward the front which is a

the work of women and men they dance

the plowing of the fields they kneel

to the harrowing with the machetes they

dance the sowing of seed (which is always

a dance) and the ripening of corn the

flowers of grain they dance the harvest

they raise their machetes for

the harvest the machetes are high

out of the hallway in green and gray

come those who dance the stealth

of the Contra cruelly they

dance the ambush the slaughter of

the farmer they are the death dancers

who found the schoolteacher they caught

the boy who dancing brought seeds in

his hat all the way from Matagalpa they

dance the death of the mother the

father the rape of the daughter they

dance the child murdered the seeds

spilled and trampled they dance

search for the Contra and the defeat

they dance a comic dance they make a

joke of the puppetry of the Contra of

Uncle Sam who is the handler of puppets

they dance rage and revenge they place

on two chairs which is the bier for

the little actor they dance prayer

Is there applause for such theater?

Silence then come let us dance

together now you know the usual

dance of couples Spanish or North

American let us dance in twos and

dance as though at a festival or in peace-

time together and alone whirling stamping

our feet bowing to one another

gather petals from the floor to throw

at our knees we dance the children

too banging into us into each other and

at our skirts wait he screams stop!

he tugs at the strap of our camera Stop!

of me No! Now! Right now! because

catches its breath the music

jumping in the guitar and phonograph holds

still and waits no no we say Carlos

not you we put our fingers on his little

shoulder we touch his hair but one of

us is afraid for god’s sake take his

picture so we lift him up we photo-

graph him we pass him from one to

another we photograph him again and

again with each of us crying or

laughing with him in our arms

Posted by Patrick Murfin at 9:04 AM