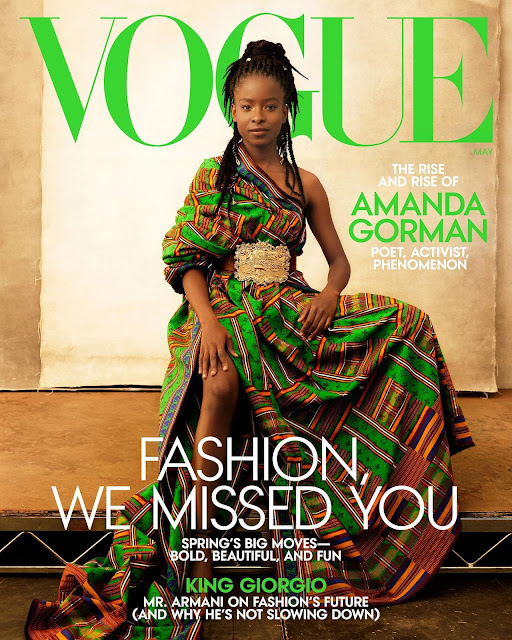 A young Black Poet on the cover of Vogue?  Something extraordinary is clearly going on.

This week Vogue unveiled its cover and a fashion spread by photographer Annie Leibovitz featuring young poet Amanda Gorman.  It was just the latest media coup for the 23 year old Phenom  who was profiled by Lin-Manuel Miranda for Time magazine’s 100 Next list and who rose to unprecedented public acclaim for her poem The Hill We Climb at Joe Biden’s inauguration.  Although that may have been her introduction to many Americans she already had many noteworthy accomplishments under her chic belt.  Michael Cirelli, executive director of Urban Word NYC said in some awe  her “bio goes out of date every two weeks.”

The media savvy poet knows that in some circles her appearance as a fashionista will be attacked as “selling out” her professed themes of Black pride and empowerment, feminism, and social justice.  Gorman could not care less.  She had been interested in fashion and design since her early teen years, self-curated the outfits she wore at readings as she climbed to fame, and had signed a modeling contract well before the inauguration,  As for selling, out Gorman clearly is not in it just for the money.  Shortly after the inauguration she said that she had already turned down $17 million in contract offers and endorsement deals.

Gorman, influenced by Toni Morrison, Maya Angelou, and Audre Lorde more than the hip-hop poetry slam poets of her own generation, still has become the tip of a spear of young female Black bards who are making poetry an important and influential art form again after decades of being over shadowed by other literary forms and relegated to the margins of the culture.  Others in this new wave include international refugee poet Emi Mahamoud just a few years older than Gorman and several women who rose to attention as voices of the Black Lives Matter Movement.  If Gorman seems less radical than some and less strident, it is only by degrees and is the logical product of her unique biography.

Gorman was born in Los Angeles on March 7, 1988 and was raised by Joan Wicks, a single mother, a 6th-grade English teacher in Watts, She had two siblings including her twin sister, Gabrielle, who is now an activist and filmmaker She has described her young self as a “weird child” who enjoyed reading and writing and was encouraged by her mother.  She was brought up and remains a Black Catholic which has deeply influenced her social justice passion.

She an auditory processing disorder and is hypersensitive to sound and also had a speech impediment during childhood.  Gorman had speech therapy during her childhood.   Gorman told The Harvard Gazette in 2018:

I always saw it as a strength because since I was experiencing these obstacles in terms of my auditory and vocal skills, I became really good at reading and writing. I realized that at a young age when I was reciting the Marianne Deborah Williamson quote that “Our deepest fear is not that we are inadequate, our deepest fear is that we are powerful beyond measure” to my mom.

She also practiced singing Lin-Manuel Miranda’s song  Aaron Burr, Sir from  Hamilton because “it is jam-packed with R's. And I said, 'if I can keep up with Leslie in this track, then I am on my way to being able to say this R in a poem.”

She was still in high school when she began reading her poetry in school and at community events.  She became a youth delegate to the United Nations in 2013 and was inspired and empowered to hear an address by Nobel Peace Prize laureate Malala Yousafzai.  The next year she was selected as the first youth poet laureate of Los Angeles. She published her first poetry book The One for Whom Food Is Not Enough in 2015.

In 2017 she was named the first National Youth Poet Laureate and read her poem In This Place (An American Lyric) for her performance at the Library of Congress.  Shortly after she signed a contract to develop a children’s book which became Change Sings: A Children's Anthem which was released after her inaugural appearance. 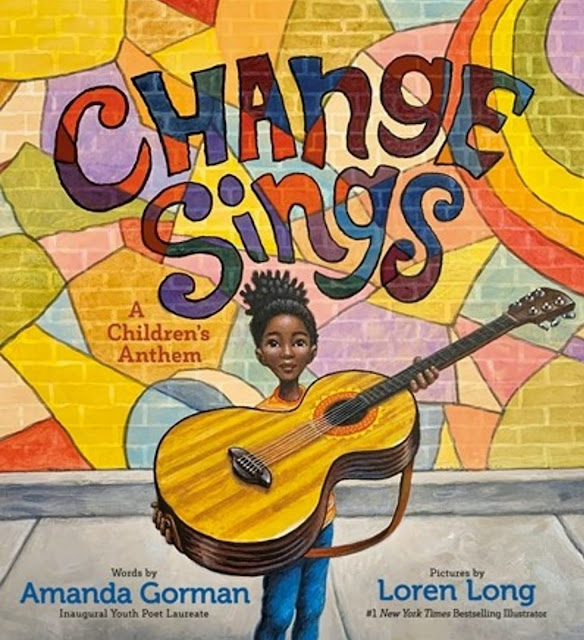 
While still at Harvard amid rising recognition she pointed out that her interests went beyond literary.  She wanted to be an agent for change and several times noted that she planned to run for President of the United States in 2036.  No one should discount her.  After hearing her inaugural poem Hillary Clinton  Tweeted her support.

In 2019, Gorman was chosen as one of The Root magazine’s “Young Futurists”, an annual list of “the 25 best and brightest young African-Americans who excel in the fields of social justice and activism, arts and culture, enterprise and corporate innovation, science and technology, and green innovation.” In 2020, Gorman presented Earthrise, an Earth Day poem focused on the climate crisis.  That May  she appeared in an episode of the web series Some Good News hosted by John Krasinski, where she virtually met Oprah Winfrey and issued a virtual commencement speech to those who could not attend graduation ceremonies due to the Coronavirus pandemic. 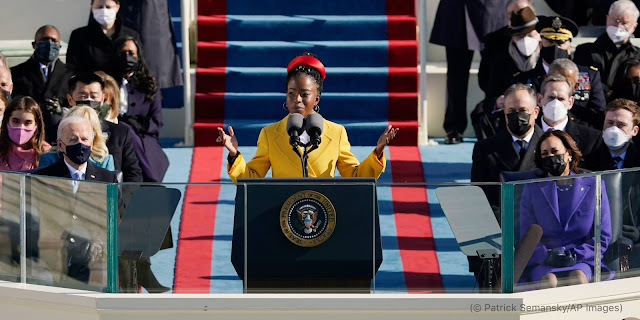 Amanda Gorman in spectacular canary yellow with her high hair bound in scarlet wowed the nation with her poem and performance at Joe Biden's and Kamala Harris's inauguration.

After her inauguration performance The Hill We Climb was issued a slender stand-alone book and a collection of the same title is slated for release this fall and has already appeared on Best Seller lists in pre-publication sales.

She was quickly tapped to compose and perform an original poem, titled Chorus of the Captains for  Super Bowl LV’s pregame ceremonial coin toss featuring honorary captains who were essential workers—James Martin, a U.S. Marine veteran; Trimaine Davis, an educator; and Suzie Dorner, an ICU nurse manager.  It certainly was something most football fans had never experienced and there was some blow back by white fans.  Gorman was glad to break down the silos of culture which prevent people from communicating meaningfully with each other.

But even triumphs like this can’t prevent the daily insults African-Americans have to face.  In March  Gorman said she was racially profiled by a security guard near her New York City apartment home, and Tweeted afterwards, “He left, no apology. This is the reality of black girls: One day you’re called an icon, the next day, a threat.”  She later Tweeted, “In a sense, he was right. I AM A THREAT: a threat to injustice, to inequality, to ignorance. Anyone who speaks the truth and walks with hope is an obvious and fatal danger to the powers that be. A threat and proud.”

What’s next for Gorman?  Who know except that it will likely  be unexpected, surprising, and entirely true to special vision. 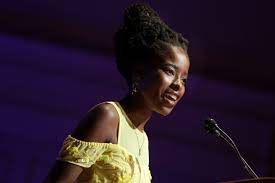 Her inaugural poem has been so widely shared that today we will feature that 2017 Youth Poet Laureate verse.

In This Place (An American Lyric)

in the footfalls in the halls

in the quiet beat of the seats.

It is here, at the curtain of day,

where America writes a lyric

you must whisper to say.

in the heavy grace,

the lined face of this noble building,

tear through the air

where love of the many

swallows hatred of the few.

There’s a poem in Charlottesville

where tiki torches string a ring of flame

tight round the wrist of night

where men so white they gleam blue—

blooms forever in a meadow of resistance.

There’s a poem in the great sleeping giant

its big blue head to Milwaukee and Chicago—

a poem begun long ago, blazed into frozen soil,

There’s a poem in Florida, in East Texas

where streets swell into a nexus

of rivers, cows afloat like mottled buoys in the brown,

where courage is now so common

There’s a poem in Los Angeles

yawning wide as the Pacific tide

where a single mother swelters

in a windowless classroom, teaching

black and brown students in Watts

to spell out their thoughts

this poem for you.

There's a lyric in California

where thousands of students march for blocks,

where my friend Rosa finds the power to blossom

in deadlock, her spirit the bedrock of her community.

a truth: that you can’t stop a dreamer

or knock down a dream.

How could this not be her city

our American lyric to write—

a poem by the people, the poor,

the Protestant, the Muslim, the Jew,

the native, the immigrant,

the black, the brown, the blind, the brave,

the undocumented and undeterred,

the woman, the man, the nonbinary,

the white, the trans,

the ally to all of the above

Now that we know it

we can’t blow it.

hurts to sew it

we must bestow it

so it can grow, lit,

the story of a Texas city depleted but not defeated

a history written that need not be repeated

a nation composed but not yet completed.

a poem in America

a poet in every American

who rewrites this nation, who tells

to breathe hope into a palimpsest of time—

a poet in every American

who sees that our poem penned

There’s a place where this poem dwells—

it is here, it is now, in the yellow song of dawn’s bell

where we write an American lyric

we are just beginning to tell. 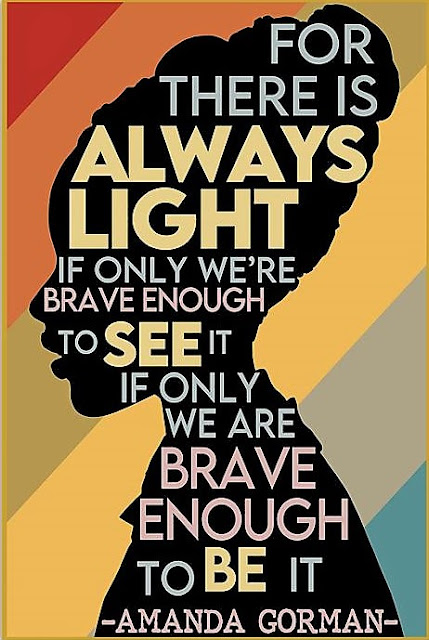 Just a year ago Gorman addressed the pandemic engulfing the world.

The Miracle of Morning

I thought I’d awaken to a world in mourning.

But there’s something different on this golden morning.

Something magical in the sunlight, wide and warming.

I see a dad with a stroller taking a jog.

Across the street, a bright-eyed girl chases her dog.

A grandma on a porch fingers her rosaries.

She grins as her young neighbor brings her groceries.

While we might feel small, separate, and all alone,

Our people have never been more closely tethered.

The question isn’t if we can weather this unknown,

But how we will weather this unknown together.

So on this meaningful morn, we mourn and we mend.

Like light, we can’t be broken, even when we bend.

As one, we will defeat both despair and disease.

We stand with healthcare heroes and all employees;

We ignite not in the light, but in lack thereof,

For it is in loss that we truly learn to love.

In this chaos, we will discover clarity.

In suffering, we must find solidarity.

For it’s our grief that gives us our gratitude,

Shows us how to find hope, if we ever lose it.

So ensure that this ache wasn’t endured in vain:

Do not ignore the pain. Give it purpose. Use it.

Know that this distance will make our hearts grow fonder.

From these waves of woes our world will emerge stronger.

We’ll observe how the burdens braved by humankind

Are also the moments that make us humans kind;

Heeding the light before the fight is over.

In testing times, we became the best of beings.

Posted by Patrick Murfin at 8:06 AM