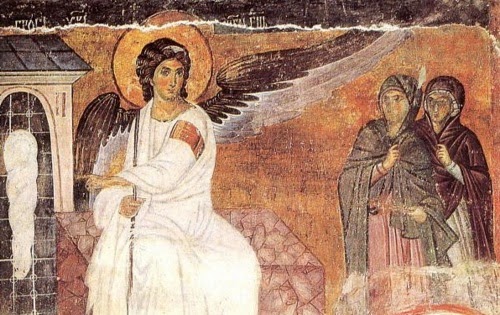 An Orthodox icon of the myrrh-bearing women--up to eight of them in the Greek tradition and the Three Marys of the Catholics--are shown Jesus's empty tomb by an angel.  Thus the central miracle of the Resurrection was revealed.

I think I have bewailed before the difficulty in finding good Easter poetry beyond a handful of familiar pieces.  The problem isn’t a shortage of verse—there is an avalanche of the stuff out there—it is a dearth of quality.  Much does not rise above clumsy greeting card sentiment, a lot is silly stuff for kids either all bunnies and eggs or fitful attempts to introduce five year olds to the mysteries of resurrection.  Worst of all are poems encrusted with a theology that makes me choke and want to spit it out like a bit of gristle.   But a bit of digging always turns up a gem or two, especially if you wander off well-marked paths and are ready to see the central event of Christianity through fresh eyes.

e.e. cummings defiantly abandoned the Unitarianism of his minister father in his youth only to slyly revisit his father’s faith with fresh eyes in his later years.  This poem, from that period, was never labeled or explicitly identified as an Easter poem, but it plainly seems to be one. 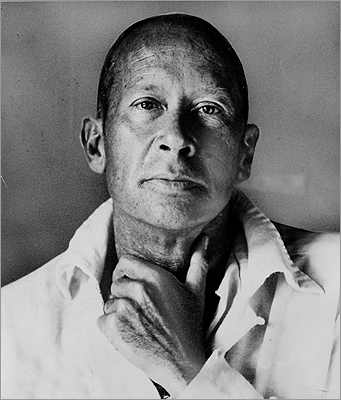 now the eyes of my eyes are opened

i thank You God for most this amazing

day: for the leaping greenly spirits of trees

and a blue true dream of sky; and for everything

which is natural which is infinite which is yes

(i who have died am alive again today,

day of life and of love and wings: and of the gay

how should tasting touching hearing seeing

breathing any–lifted from the no

of all nothing–human merely being

(now the ears of my ears awake and

now the eyes of my eyes are opened) 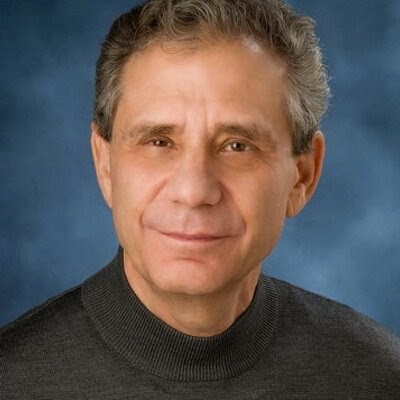 On surprise came from a poet named Nicholas Gordon who offers a whole page of his Easter poems at Easter Poems for Free which offered several pieces for free use.  Ordinarily such a blanket offer would make me suspicious of quality—free poetry, pushed by writers desperate for any readers, like me for instance, is often worth less than the price of admission.  But Gordon fooled me, even when he was using such hackneyed forms as poems in which the first letters of each line spell out a word.  Ordinarily, that is the stuff of a fourth grade writing assignment, but Gordon showed that any form in skillful hands can be raised to art.  He also showed the ability to be subtle, to take his theme in a muted direction leaving the reader to make connections.  Unfortunately I found no information on the author except that he was born in Albany, New York in 1940.

Alive without, long since gone within,

Shall arise to feel both love and pain.

There are no dead that cannot live again.

Even those long buried shall begin

Rising up towards tears and rage and need.

Having Walked the Tight-Lipped Jersey Streets

Having walked the tight-lipped Jersey streets,

A house to every inward-turning love,

Peaceful, neat, above all else secure,

Pausing, I am ravished by their beauty.

Years will tell the stories of these streets;

Each house, the joy of its secluded love,

Singed or not by life's most awesome beauty.

There is no quarter on these death-strewn streets,

Each house the scene of terror, pain, and love,

Redeemed alone by the passion of its beauty. 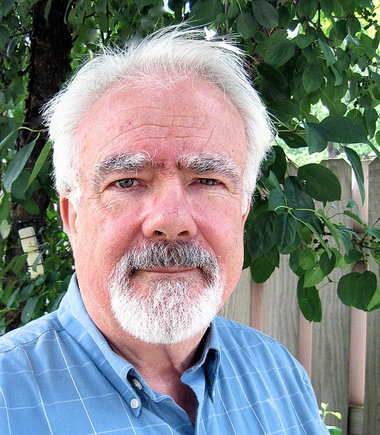 Finally, we have a poet who took a modern unfolding atrocity that at first glance might seem to have no connection Easter and drew a fearful connection.  Charles Martin, born in 1942 in New York City, is a highly regarded Catholic poet identified with the new formalist movement.  A professor at Queensborough Community College (CUNY), he also teaches poetry at Syracuse University. He frequently teaches workshops at the Sewanee Writers Conference, the West Chester Conference on Form and Narrative in Poetry, and at the Unterberg Center of the 92nd Street YMHA. A graduate of Fordham University and holds a PhD from the State University of New York at Buffalo. He lives in Manhattan and Syracuse with his wife, arts journalist Johanna Keller.  He has received several honors for his collections of poetry including   Steal the Bacon in1987, What the Darkness Proposes in 1996, and Starting from Sleep: New and Selected Poems in 2002.  Martin is also the translator of Latin poetry, including the award winning Ovid’s Metamorphoses He has been nominated for the Pulitzer Prize in Poetry and was the poet in residence at the Cathedral of Saint John the Divine in New York City from 2005–2009.

To take steps toward the reappearance alive of the disappeared is a subversive act, and measures will be adopted to deal with it.

In the Palace of the President this morning,

The General is gripped by the suspicion

That those who were disappeared will be returning

In a subversive act of resurrection.

Why do you worry? The disappeared can never

Be brought back from wherever they were taken;

The age of miracles is gone forever;

These are not sleeping, nor will they awaken.

And if some tell you Christ once reappeared

Alive, one Easter morning, that he was seen—

Give them the lie, for who today can find him?

He is perhaps with those who were disappeared,

Broken and killed, flung into some ravine

With his arms safely wired up behind him.