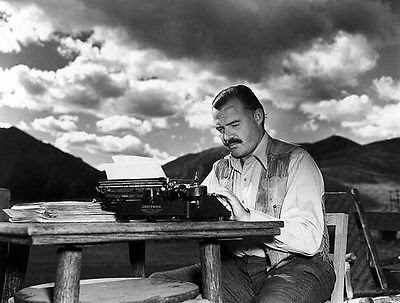 Ernest Hemingway at his trusty Underwood #5 portable hunt-and-peck typing in the great outdoors with a pile of already completed pages on his make-shift desk.  Just as he imagined himself--the writer as hero.

PBS ran Ken Burns’s new four hour documentary about Ernest Hemingway the last two evenings.  I have to admit that as much as I admire Burns’s work, I haven’t seen it yet.  I have recorded it but will have to wait for chunks of time when my wife Kathy doesn’t want the TV set.  She would never sit down that long for an examination of figure who she has never read but thinks of as a misogynistic, macho creep.

And that has been Hemingway’s problem. Once considered the most important American novelist of the 20th Century—and there was plenty of competition for that honor—widely read and the recipient of the Nobel Prize for Literature.  He has fallen deeply out of favor in more recent decades.  That has been due as much as anything to his carefully constructed public image as a rugged he-man adventurer, a lover of war and blood sports, a two-fisted drinker, and a man who carelessly used women.

His forthright, Spartan, and straight forward style once considered a revolutionary liberation from ornate prose and sentimentalism is now viewed by modern critics as too anchored in time and place, too bland, and worst of all lacking introspection.  Feminists set him up to be an idol of patriarchy to be brought crashing down.

There is truth to all of that, of course.  But it also is not always supported by either his life or work.  Seen by modern conservatives as a model of masculinity and a lover of guns and glory, he was a life-long leftist and often wracked by the depression and self-doubt that lead him ultimately to swallow a shotgun blast.  He admired and loved strong women and his female characters were well developed and usually the moral superior to the flawed men who loved them.  For every drop if heroism in his male protagonists there was plenty of ambiguity and angst.

Hemingway, no matter what we think of him, is so identified as a novelist, short story writer, reporter, and essayist that it may come as a shock that he also wrote poetry.  He wrote verse his entire life but most frequently in his younger years spanning his Nick Adams in the woods days, World War I, and jazz age Paris.  88 of those poems were included in Hemingway’s first privately printed book along with short stories.  Those poems were well served by the same economy of style and clarity as his prose.  They have stood up very well.

Along With Youth comes from those days when Hemingway was escaping the “broad lawns and narrow minds” of his native Oak Park, Illinois by tramping around the woods and streams of Michigan fishing, hunting, and trapping.

It must have ended somewhere.

Chuck-wills-widow on a biassed twig

And the line of love

They must have ended somewhere.

And the canoe that went to pieces on the beach

The year of the big storm

When the hotel burned down 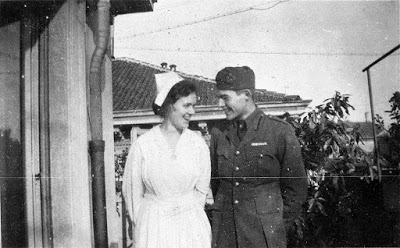 Hemingway in an Italian military hospital in his Red Cross ambulance corps uniform with Agnes von Kurowsky, the lovely nurse eight years his senior he fell madly in love with.

Champs d’Honneur was written after the Great War where Hemmingway served as an ambulance driver in Italy and was gravely wounded.  Not much glorifying war here,

Wooden crosses where they fell,

Stuck above their faces.

Soldiers pitch and cough and twitch—

All the world roars red and black;

Soldiers smother in a ditch,

Choking through the whole attack.

“All Armies are the Same” is another bitter anti-war verse.

“All Armies are the Same”

All armies are the same

Valor is an attribute of boys

Old soldiers all have tired eyes 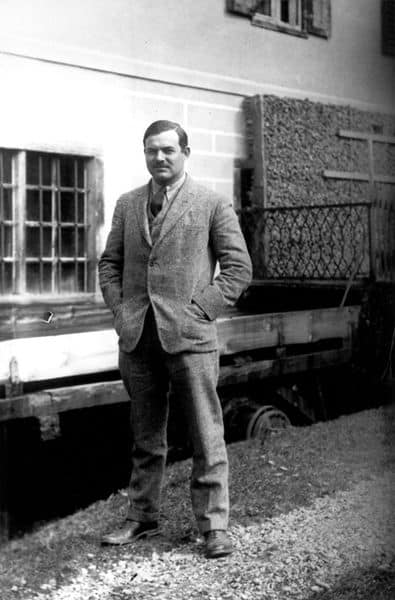 Hemingway outside his Paris apartment about the time he wrote these short poems.

The Age Demanded was written in post-war Paris.  The iron pants in the verse referred to the braces he had to wear on his legs in his long recovery from his war wounds.

The age demanded that we sing

And cut away our tongue.

The age demanded that we flow

And hammered in the bung.

The age demanded that we dance

And jammed us into iron pants.

And in the end the age was handed

The sort of shit that it demanded.