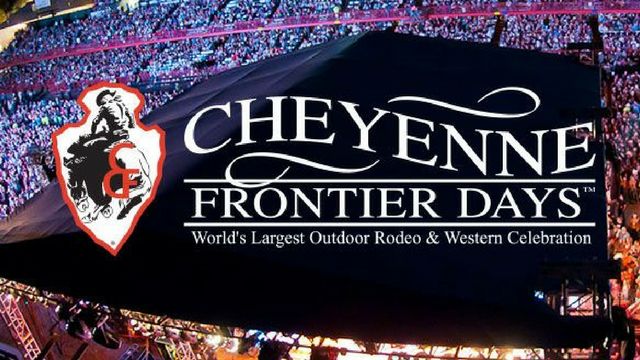 Back in my old hometown of Cheyenne, Wyoming the annual rodeo completion cum bacchanal known as Cheyenne Frontier Days is getting underway after having been scrubbed last year for the Coronavirus pandemic.  This is being billed as the 125th edition of what has usually been held annually. Some events and things have been pared back and organizers do not expect it will attract the 200 thousand that generally attend the Daddy of ‘em All held over the ten days around the last full week in July virtually swamping the Wyoming capitol city’s 64,000 residents.  But super-star entertainment appearances by Garth Brooks and Blake Shelton might bely the lowered expectations.

It is both the longest continuously held cowboy competition in the world and by far the largest outdoor competition of its kind.  Although there has been a National Finals Rodeo since 1956 to crown individual champions in each main professional rodeo event, that indoor competition, currently held in Las Vegas, lacks the pageantry and history that makes Frontier Days unique. 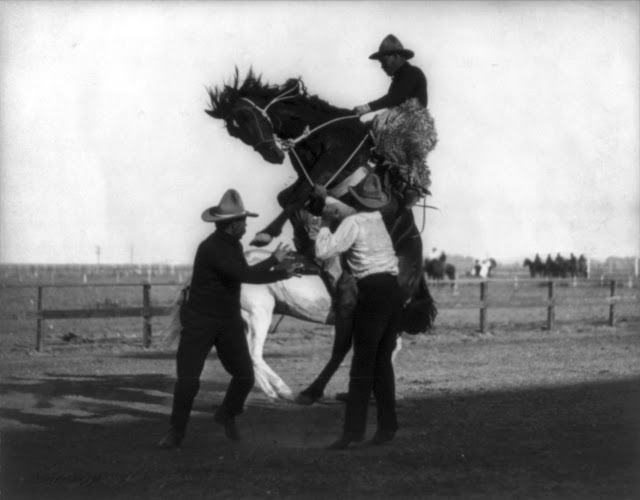 Bronc riding at the first Frontier Day cowboy competition in 1897.  Spectators watched from carriages and horse back or perched on the rail fences.  A few hundred attended, but word spread fast and an annual event became a popular tourist spectacle.

The first Cheyenne Frontier Day was a one day contest for local cowboys working the big ranches in the area on September 27, 1897.  The event included a raucous informal cowboy parade through downtown with the boys whooping it up and riding wildly much as they had done when they brought their herds to the rail head after round-up every year.

Cheyenne was then a bustling and modern small city, not only the Wyoming state capitol, but home to major Union Pacific Railroad facilities.  Its streets had been the first in the nation to be illuminated by electric arc lamps back in 1883.   Fueled by the wealth of cattle barons on Millionaire’s Row, the city considered itself up-to-date and cosmopolitan.  Even in 1896, however, just six years after statehood and four years since the bloody events of the Johnson County War, residents were becoming nostalgic for their wild west heritage. 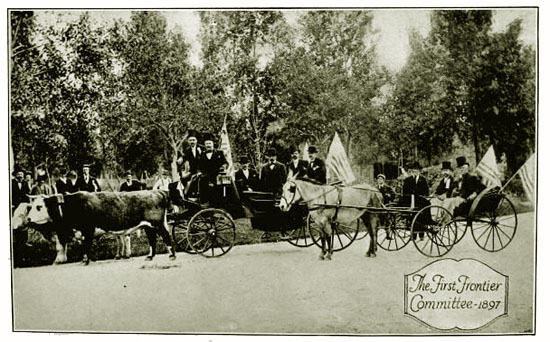 The distinguished gentlemen of the first Frontier Committee donned their formal top hats best suits in their finest carriages.  Local cattle barons, bankers, railroad executives, and politicians.  Having their fine wheels drawn by oxen and a jack ass was a nice touch.

The first event was so successful that Frontier Day became an annual.  The competition was soon promoted nationally by the Union Pacific to boost tourist traffic on its trains, and the local business community loved the sound of cash registers ringing in local hotels, restaurants, bars, and brothels. 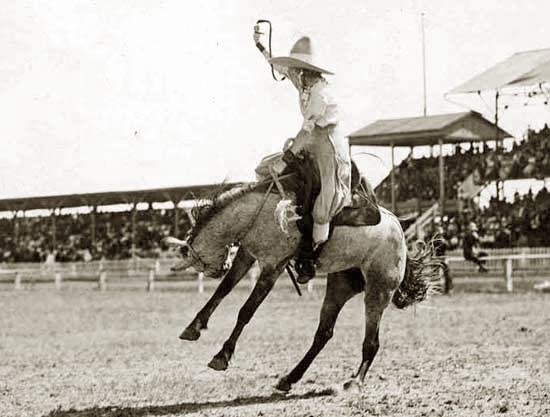 In the early years cowgirls competed separately in most of the same events as the men.  Despite the popularity of their competitions, by the 1930s they were confined to "powderpuff" events like barrel racing.

By the turn of the 20th Century elements of the wild west shows popularized by Buffalo Bill Cody and others, including mock hold-ups of the Cheyenne to Deadwood stagecoach, Indian battles, and in particularly bad taste given recent the state’s recent history, a re-enacted lynching of rustlers were incorporated into pageantry surrounding the rodeo.  Other events like street dances, amateur theatrics, menageries, and carnivals were added to the ever growing event over the years as more days of competition were added to the rodeo. Cowgirl competitions were an early favorite. The cowgirls rode the same stock and took the same risks as the men but were judged separately. 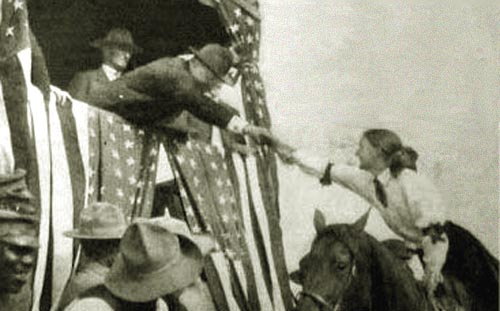 From his special box erected on the arena floor former President Theodore Roosevelt shook hands with a cowgirl at the 1910 Frontier Days.

In 1910 former President Theodore Roosevelt was delighted to be on hand to congratulate the winning riders.  In 1903 he visited as sitting president and a special one day rodeo was staged in his honor and he participated in a ride over Sherman Hill from Cheyenne to Laramie with Senator Francis E. Warren and big-wigs of the Wyoming Stock Growers Association.

By the 1930’s stars of Hollywood’s popular westerns, including the state’s own favorite son Col. Tim McCoy, were regularly making personal appearances and sometimes incorporating the rodeo itself into their films.  Concerts by popular Hillbilly and Cowboy singers—and later the masters of Western Swing—were added to the mix.

Since 1931 reigning over the event has been Miss Frontier and her Lady in Waiting.  The first was Jean Nimmo Dubois, a descendent of Esther Hobart Morris who was America’s first female Justice of the Peace in South Pass in 1869 and a heroine of the Wyoming suffrage movement. For the first three years the winner was selected on the basis of who could sell the most tickets to a dance.  Starting in 1934 the Frontier Committee has privately picked Miss Frontier and her Lady in Waiting, traditionally drawing on the daughters and granddaughters of local cattle barons or Cheyenne business leaders.  One requirement was that she had to be an expert horsewoman. 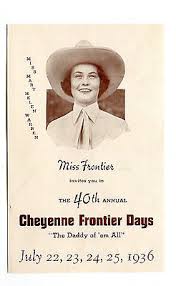 Miss Frontier of 1936 was Mary Helen Warren Wolborn, granddaughter of the state’s founding patriarch Francis E. Warren.  She designed the distinctive white buckskin culottes worn to this day.  Her inspiration was a costume worn by celebrated fan dancer Sally Rand who had titillated audiences the year before. 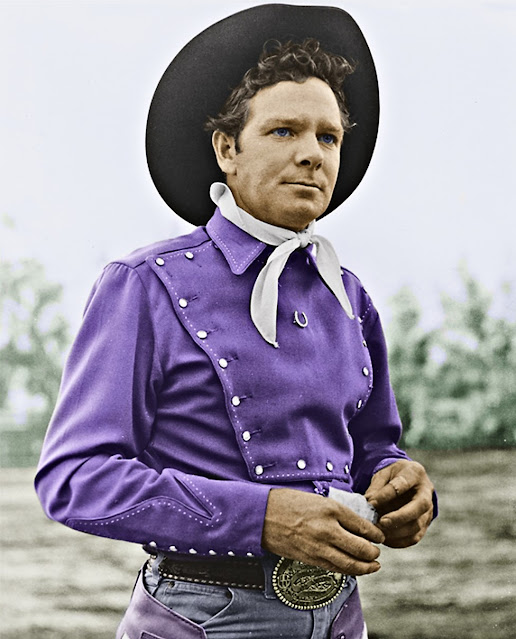 For a boy in Cheyenne in the 1950's rodeo champions like Casey Tibbs were bigger stars than baseball heroes like Mickey Mantel, Stan Musial, or Willie Mays.

The 1950’s were the Golden Age of Rodeo.  The most storied figures of the sport were active—Casey Tibbs, Big Jim Shoulders, the Bell Brothers, and the legendary rodeo clown and bulldogger Wilbur Plaugher—and shined in Cheyenne.  Monte Blue, known for playing the sheriff in countless B westerns, was the arena announcer famous for his signature call at the beginning of each rodeo, “Let’s go, let’s show, let’s rodeo!”

Chief Charley Red Cloud and Princess Blue Water of the Oglala Sioux brought their band to Frontier Days for many years shown here with Miss Frontier and her Lady in Waiting in 1956.

Chief Charley Red Cloud and Princes Blue Water, who had appeared with Buffalo Bill, brought their band of Oglala Sioux each year to perform traditional dancing and live in a teepee village on the grounds of Frontier Park.  Top movie and TV stars from Roy Rogers to Hugh O’Brian made personal appearances and country music stars like Ernest Tubbs, Red Foley, and the Sons of the Pioneers performed nightly at the Frontier Pavilion.

During that era the famous saloons and bars downtown were a nightly explosions of cowboy contestants, tourists, and pretty young local girls—many of them really, really young—carousing and drinking with intermittent brawls all of which spilled into the streets until the wee-small hours.  I am told that in the interest of family entertainment local authorities have heavily clamped down on that and the evenings are pale and tame now.  Some old timers say downright boring. 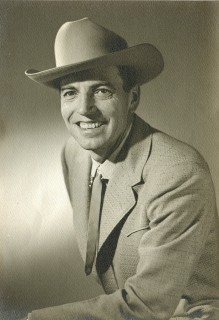 My father W. M. Murfin in his first year as Secretary of the Frontier Committee in 1954.

From 1954 through 1956 my father, W. M. Murfin as Secretary of the Frontier Committee, played a leading role in coordinating the rodeo and all the other activities.  My brother Tim and I reveled in riding in the parades and meeting the cowboys and celebrities that often came through our house.

Today the whole Frontier Days extravaganza stretches over ten days and includes 9 rodeos sanctioned by the Professional Rodeo Cowboys Association (PRCA).  Day Money is awarded to the winners in each event for each rodeo.  At the end of the schedule Cheyenne Frontier Days champions are named in each event and an All Around Cowboy, who must compete in two or more events, are determined by the total amount of Day Money earned. There are also nights of separate Championship Bull Riding (CBR) competitions. 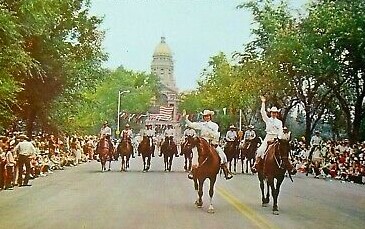 In 1963 Miss Frontier and her Lady in Waiting in their fringed white culottes led the parade down Capitol Boulevard with the Frontier Committee right behind them.

More than 2,500 local volunteers work on events that include the rodeo, 3 Grand Parades, pancake breakfasts, concerts, chili and chuck wagon cook-offs, the carnival, exhibits, Indian Village, and military open houses.  A traditional performance by the United States Air Force Thunderbirds is back with their aerial acrobatics. 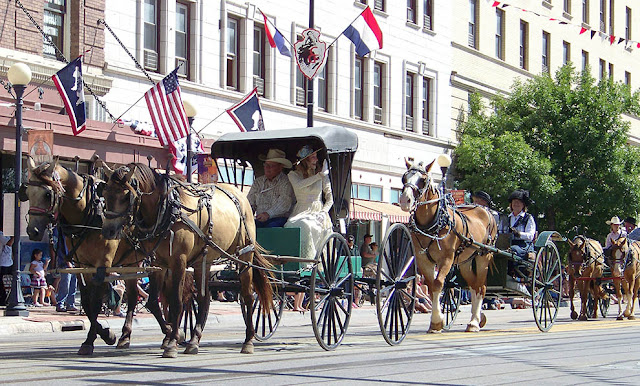 I know many readers of this blog are animal lovers and abhor rodeo and the people who love it.  No question about it, rodeo can be brutal to both animals and human competitors—bull riding is hands down the most dangerous competitive sport in the world.  It remains so even though significant reforms have been made in how rodeo stock is handled.   Particularly dangerous events for animals like the Chuck Wagon Races—think horse drawn NASCAR with often horrific pile-ups—and Steer busting—roping a steer around the horns then pulling past the animal catching its feet and throwing it to the ground, a maneuver that often resulted in broken necks or legs—have been eliminated but the Wild Horse Race which is more dangerous to competitors than the unbroken stock is still on.  Nothing short of abolition by law of all rodeo competition will satisfy most animal rights folks.  I understand that.  But I also love a good rodeo.  I guess you will have to lump me with the heartless brutes.