U.S. Patent No. 1—Humdrum Need the Mother of Invention 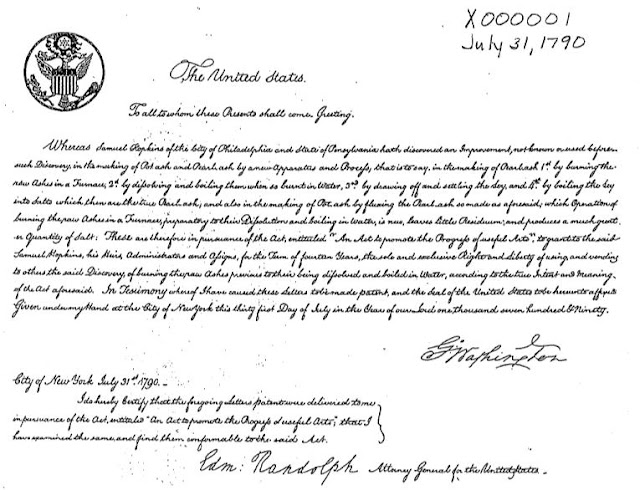 Samuel Hopkin's patent with the original signatures.  The date and number in the top right of the page were added after the Patent Act of 1836.

On July 31, 1790 President George Washington affixed his signature to a document granting the first United States Patent.  It was the culmination of a process that began when Secretary of State Thomas Jefferson, himself an inventor with more than a passing interest in innovation, carefully reviewed the application.  When he concluded that the submission was both original and useful he signed the document and passed it on to Secretary of War Henry Knox who also approved it and then sent it to Attorney General Edmund Randolph.  Only when the last was finished with it did it land on Washington’s desk.

It was a cumbersome procedure entailing most of the Executive Branch of the still new Federal Government.  It was an improvisation by Jefferson who for some reason left out his rival for Washington’s favor, Secretary of the Treasury Alexander Hamilton despite the New Yorker’s avowed interest in encouraging American industry.  Chances are very good that the snub was not accidental. 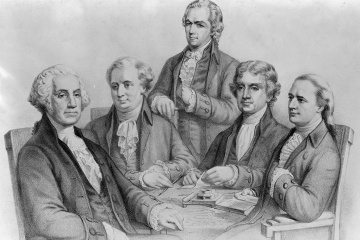 President George Washington and his Cabinet--Secretary of War Henry Knox, Secretary of the Treasury Alexander Hamilton, Secretary of State Thomas Jefferson and Attorney General Edmund Randolph.  All but Hamilton were involved in the review of the first patent.

Congress shall have the power...to promote the progress of science and useful arts by securing for limited times to authors and inventors the exclusive right to their respective writings and discoveries.

The first person to take advantage of the new law was Samuel Hopkins, a Philadelphia inventor who petitioned for a patent on an improvement “in the making of Pot ash and Pearl ash by a new Apparatus and Process.”  As inventions go, it was pretty mundane, but potash, which was derived from the ash residue of vegetable matter, usually wood, and was used in the making of soap and candles.   Both of those necessities had usually been made at home in the Colonial Era.  Hopkins hoped his process would encourage their manufacture in small scale craft shops for local sale.  So it perfectly fit Jefferson’s key criterion—usefulness.

Hopkins was so excited about the prospects for his process that the very next year he was also granted the first patent from the Parliament of Lower Canada in 1791, and issued by the Governor General in Council Angus MacDonnel at Quebec City.

The approval process was repeated two more times that year for a new candle-making process and Oliver Evans’s flour-milling machinery.  The following year the trickle of applications became a rushing steam as innovative and ambitious dreamers submitted their ideas for a $4 fee—a cost that although not insignificant could be raised by most.   Whatever his own interest in examining the models and drawings, the work load was overwhelming the Cabinet and the President’s attention.

Jefferson substantially streamlined the process.  He handed over initial review to a State Department Clerk who would make a recommendation which he would approve and send on to the President for a final signature.  In practice the final two steps began to simply rubber stamp the Clerk’s determination.

This process continued into Jefferson’s own Presidency.   At his urging Congress created Patent Office with its own staff of clerks.  More than 10,000 patents were issued before 1836 when a fire destroyed all of the records.  That fire spurred Congress to enact the Patent Act of 1836 which authorized the hiring of professional patent examiners in addition to the clerks.  It also authorized new patent documents to be issued in all cases where the patent could be confirmed by other records such as copies held by the recipient.  2,845 patents were restored and issued a number beginning with an X.  That included Hopkins’ first patent.  The rest of the missing patents were voided. 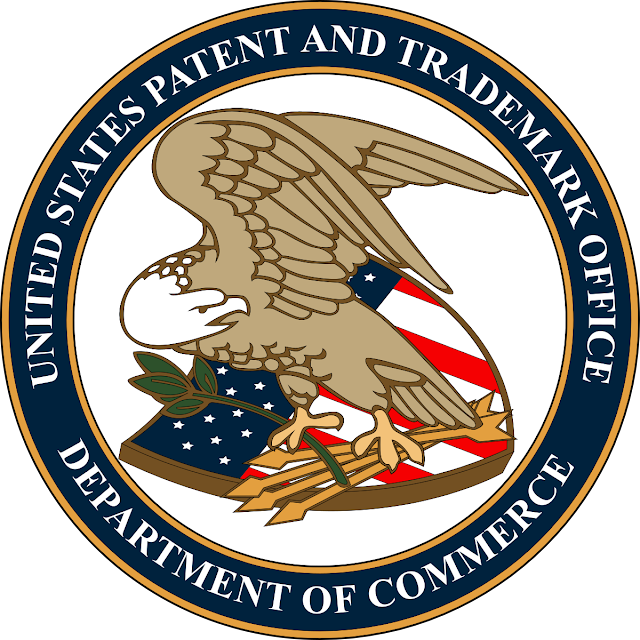 To date there are more than five million patents that have been issued to Americans and other nationals by the U.S. Patent system.  Since 1975 patents have been granted by the United States Patent and Trademark Office, a part of the Department of Commerce.

By the way a copy of Hopkins’ patent with the original signatures still exists and is held by the Chicago Historical Society.