What Ever Became of the Picnic? 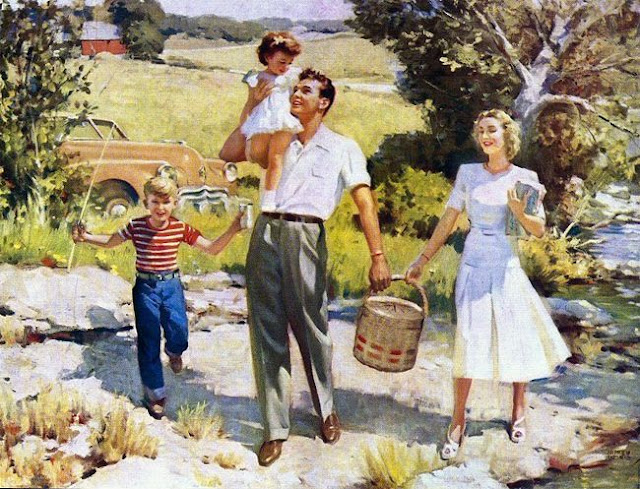 The American family picnic 1950s.  Was it ever really like this?  Pretty close.

I don’t want to be one of those old fuddy-duddies who bitch and moan that everything was better in the good ol’ days.  Trust me.  It wasn’t.  Take polio, segregation, child labor, and push lawn mowers for example.  And as much as I once loved banging away on my trusty Smith-Corona, the computer I am working on is way better and I can get the fruits of my writing labor in front of you eyeballs in a trice.  Nifty.

But what the hell happened to picnics?  I don’t mean just eating outside which humans have been doing since they came down from trees, or wherever they hung out before the magic pixie dust made them something a little different than the other apes.  We have no end of cook outs and barbeques on our private decks and patios.  We munch Red Hots at ballparks.  We grab fast food on the fly and have lunch at the little tables outside, in sprawling urban plazas adorned with monumental modern sculpture, pandemic inspired al fresco spots cleared from parking zones.  There are church events, concerts, carnivals, and family reunions.  We eat outside all the time, weather permitting, and sometimes even when it is discouraging. 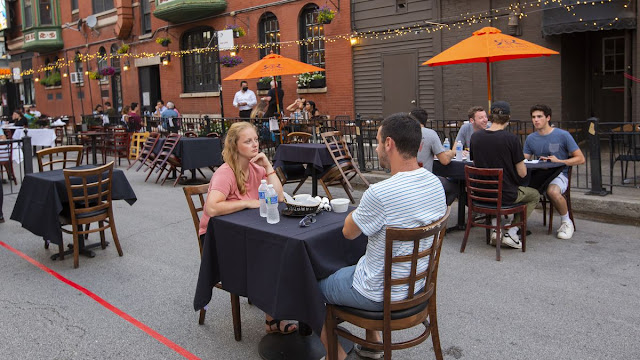 
It takes more than chowing down outside for a picnic. A picnic was an event and an adventure, the highlight of a week.

When I was a boy in Cheyenne it meant loading up my Mom’s ’51 Chevy or my Dad’s official State of Wyoming station wagon—not for unofficial use—and heading out on a Sunday Drive—another lost tradition.

Out from the city we would go, often down gravel roads, in search of, I don’t know, nature of some kind or something.  May be out Happy Jack Road, Vedauwoo Canyon, along some creek out on the Wyoming Herford Ranch, by the Tree Growing Out of the Rock along Highway 30 to Laramie, down to Colorado, or just any enticing spot with shade and a pull off along the road. 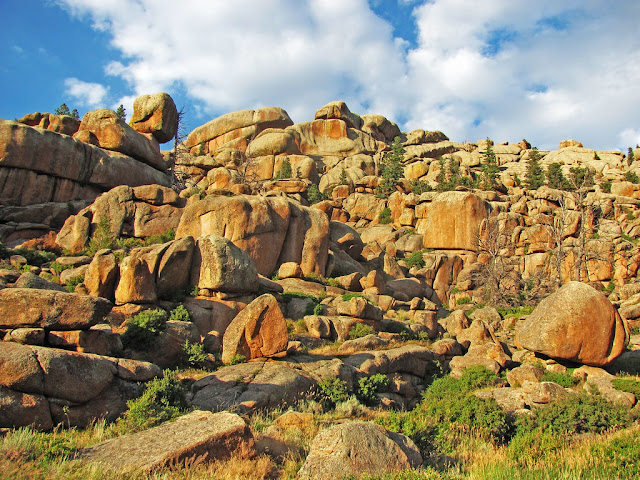 Of all of our picnic destinations around Cheyenne, the rocks at Vedauwoo Canyon offered the highest adventure opportunities for boys--and the most dangerous.


When we found a spot, out would come a blanket or two to spread on the ground, which, being Wyoming, was often a little stony, strewn with pine needles and cones, covered in clumps of prairie grass and burrs.  Once smoothed out to my mother’s satisfaction we would unload the wicker hamper, a gallon thermos jug filled with iced tea, tin plates, aluminum tumblers that originally came with cottage cheese in them from the milk man, red checkered napkins, and Woolworth’s stainless steel flat ware.

The menu?  Glad you asked.  Most likely cold fried chicken.  We always had chicken on Sunday, and it was surely a Sunday afternoon, roasted if we were home.  But sometimes, for a more impromptu picnic, just cheese sandwiches with yellow mustard and Miracle Whip cut in half and wrapped in waxed paper.  Sometimes there was a bag of potato chips—rare treat not often on Mom’s shopping lists—or her favorite shoestring potatoes out of a can.  There might also be in covered dishes a potato salad and Van Camp’s Pork & Beans.  On a real good day there would be a plate of deviled eggs.  For dessert, watermelon by the slice or if it had been a cool enough week to use the oven, a homemade cherry pie.

Generally, there was nothing that needed cooking or heating, but once in a great while when we knew there would be a park grill pit, maybe wieners to roast on a sick and marshmallows to toast if we lingered to dusk.

Not much planned for amusement.  The picnic was the main fun.  Maybe we would bring a rubber ball to toss around between my twin brother Tim, me, and Dad after eating.  If there was a running creek nearby we could roll up our jeans and go wading.  We might have even brought our rods and a coffee can of worms for a little fishing.  But Dad, a great fly fisherman was bored by our drowning the worms under a bobber but dared not pull out his gear for fear of snagging one of our ears on a back cast.  Besides, for him fly fishing was a holy and solitary rite not compatible with noisy children.

Sometimes my brother and I snapped photos with our Kodak Brownies and got back little glossy prints in a week or so from the drug store.  Wish I could find some of those pix now.

Quite often we would go hiking and exploring, which usually quickly became an extension of our back yard cowboy and Indian games.  If we were at Vedauwoo we would try to scamper up the steep sides of the box canyon.  When I was twelve I broke my ankle there, but my Mom thought I was just being whiney about a simple turn.  It was not until it swelled to the size of a grapefruit and turned an angry, ugly color, that she believed me and reluctantly took me to the doctor the next day.

Few picnics ended with anything near that drama, although there could be bickering and yelling in the car on the way home if we were all tired and cranky.  But the next week we were rarin’ to go again. 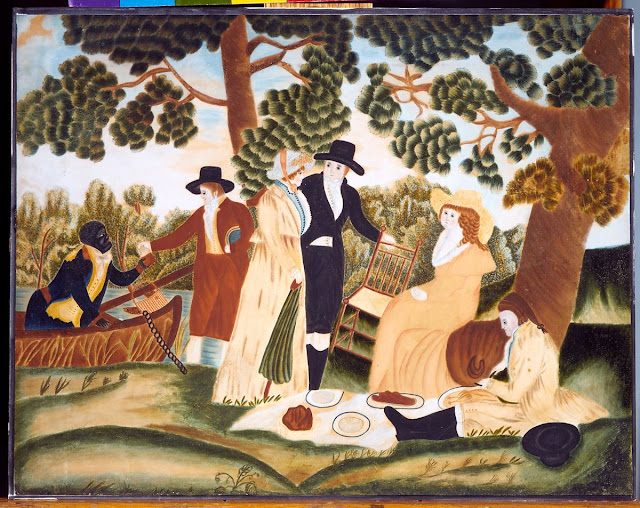 American folk art circa 1800, probably Pennsylvania, shows the gentry on a picnic with a liveried servant--free or slave?


Millions of American families did more or less the same thing going back to when buggies and farm wagons were used instead of Chevys and substituting farm pastures, beaches, lakes, and city parks for destination.  Graveyards were a surprisingly frequent choice.  In the city the family might have to lug everything on trollies or busses to get to the park or walk for miles with everything packed in a Radio Flyer red wagon.  The menu and other particulars may have varied.  But the idea was the same.

Can you imagine rounding up children today for such an expedition?  “What are we going to do?” “Eat”  “That’s it?”  “Mostly.”  “There’s nothing to do!”  Oh, the wails, oh, the moans.  I know that after a few disastrous tries with our daughters when they were small, we gave up. 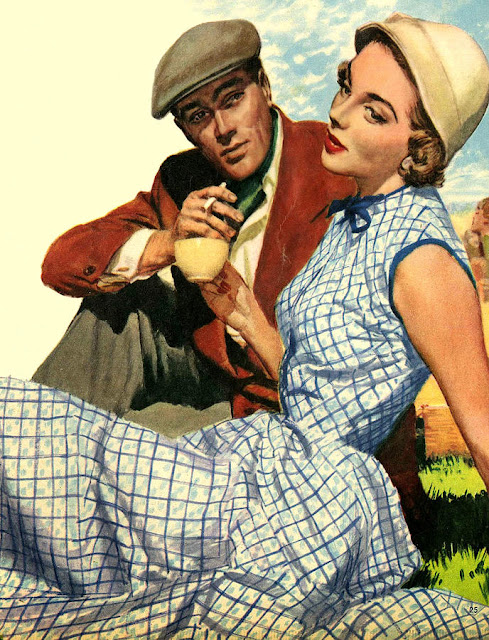 
Of course, picnics were not just for families.  They were a great cheap date.  An innocent enough sounding activity that otherwise closely watched young people often got time away from prying eyes.  It could be perfectly romantic; it could also become a sweaty rutting ground.  I suspect more than a few children were conceived on a picnic blanket.

But no need for that now. 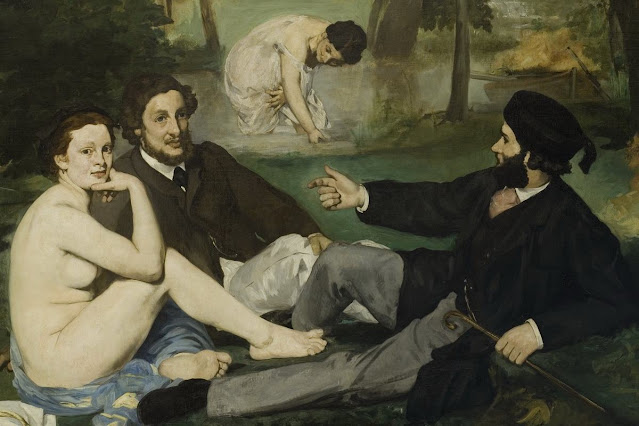 The French had more interesting picnics according to Édouard Manet in 1863.


Of course, picnics were not even uniquely American, we know, because a lot of French artists found them attractive subjects and displayed that the French often had a more adventuresome take on it than did always prudish Americans.

And even the English, especially the gentry and toffs enjoyed a picnic outing if it was accompanied by servants and elegant accouterments.  But they always looked stiff in acres of crinoline and huge hats for the ladies with gentlemen buttoned up in sporting wool tweeds.

I’ll take our old American version, informality, dirt, dust, ants, mosquitos, sunburn and all.  If only I could find one….