The President Comes to Town 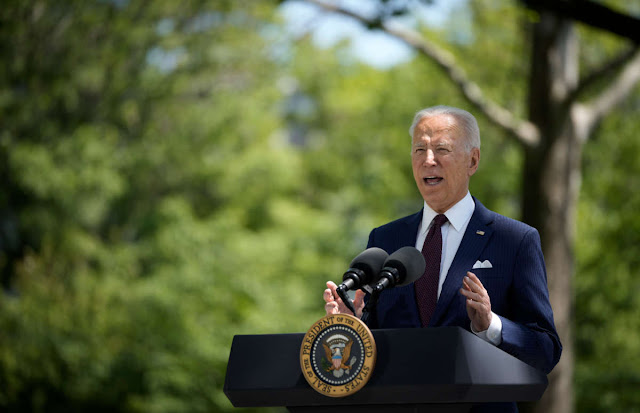 President Joe Biden is on his way to Crystal Lake.

President Joe Biden will be in my neck of the woods today.  He will make an appearance at McHenry County College literally around the corner and a mile or so northwest of my Crystal Lake, Illinois house.  According to a somewhat sketchy public itinerary, the President should be greeted at O’Hare late this morning by Governor J. B. Pritzker, Chicago Mayor Lori Lightfoot, and other dignitaries.  There will be a photo op and brief press statements, perhaps even a few moments of private consultation before Marine One ferries him to the MCC campus.  Pritzker will likely be on board as will Congresswoman Lauren Underwood who barely won re-election to her 14th District seat last fall despite a narrow loss in McHenry College.  The county was also the only Collar County that Biden failed to carry.

White House press know-it-alls seemed befuddled by the choice even though it fits with Bidens campaign to take his economic, educational, and family initiatives currently stalled in the closely divided Senate to Mid-western battlegrounds.  But Illinois is the most safely Blue state in the region and the trip doesn’t take him to an economically ravaged rust belt spot where he might appeal to disaffected working class voters.  McHenry County is traditionally Republican, mostly white with a growing Latinx minority, and for the most part comfortably middle class.  The pundit class shook their collective heads trying to figure out Joe’s choice.  Valuable time, it seemed to them could be better spent almost anywhere else. 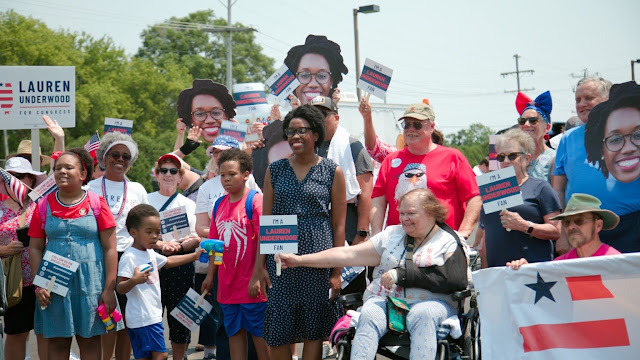 Like  the President Congresswoman Lauren Underwood narrowly lost McHenry County last fall but is already campaigning hard for re-election.  Just after marching in the Crystal Lake Independence Day Parade on Sunday, she will be back with Biden at MCC.


But despite the 2020 election results, McHenry County has steadily been turning from deep Red to Purple.   Barak Obama carried the county in 2008 and narrowly lost it four years later.  State Democrats have fared very well.  Lauren Underwood and Sean Casten were elected to Congress largely thanks to the revulsion of suburban Republican women with the former Resident.  And even though red-meat Trumpists doubled down on their fealty to the former Cheeto in Charge, their victory was less than overwhelming, and Democrats were able to make important inroads on the County Board.  Republicans seem perpetually in civil war with themselves over who can stake out the most radical positions which are deeply unpopular with many.  There is political hay to be made here.

Be that as it may, local Democrats seemed just as surprised when Biden’s visit was first floated on Monday.  Neither Underwood’s re-election campaign nor the Democratic Party of McHenry County apparently courted a visit.  Pritzker and Lightfoot each could probably have picked a half-dozen better spots to shore-up their political fortunes or highlight pet issues.  Powerful Black Democrats who now dominate the Illinois House and Senate could easily get their noses out of joint by perceived snub.


Perhaps as White House Press Secretary Jen Psaki said, the visit is about policy, not politics.  Kristina Zahorik who triples as McHenry Dem Chair, head of the Illinois County Democratic Chairman’s Association, and as a State Central Committeewoman, agreed telling the press:

The event is not a political event. We are excited, however, that the president is highlighting our great community college and thank him and our Illinois Democratic delegation for supporting building back better with investments in the American Rescue Plan, the American Infrastructure Plan and the American Family Plan.

Indeed, those are the policy initiatives Biden plans to put front and center. 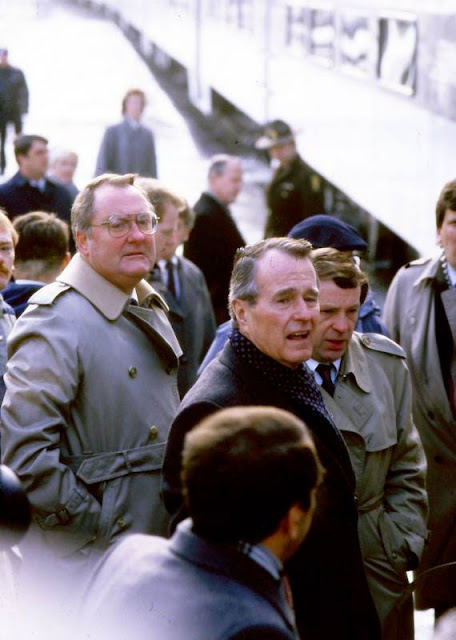 While this will be the first visit by a sitting President to Crystal Lake, it is not the first time we have been brushed by Presidential politics.  Back in 1988 Vice President George H. W. Bush made two campaign appearances at McHenry County College, in the run-up to the Illinois primary in which he faced Kansas Senator Bob Dole and again in the fall before he faced Democrat Michael Dukakis.  At the latter event he repeated the promise that would come back to haunt him—“Read my lips.  No new taxes.”

I was relatively new to McHenry County back then but remember watching Bush’s helicopter fly low overhead while I was picking up garbage outside of the old Crystal Point Mall in Crystal Lake that October.  It was an overcast, blustery day.  Inside the mall it was the excited topic of everyone’s conversations.  I took an outsider’s jaundiced view of the whole thing.

On both occasions Bush was accompanied by his wife Barbara and in November his entourage included Governor “Big Jim” Thompson and Congressman Phil Crane.  The McHenry County Republicans tightly controlled tickets to both events and the October visit also connected the candidate to deep-pocket donors.

The local press seemed to expect that County Dems would handle the Biden visit the same way.  But the Party was not handling tickets for the event.  It is unclear just who will be admitted to Biden’s remarks inside the College—faculty and students, perhaps carefully screened, and invited guests.  Just who those guests might be, are a mystery.  I apparently lack the clout to get such a pass. 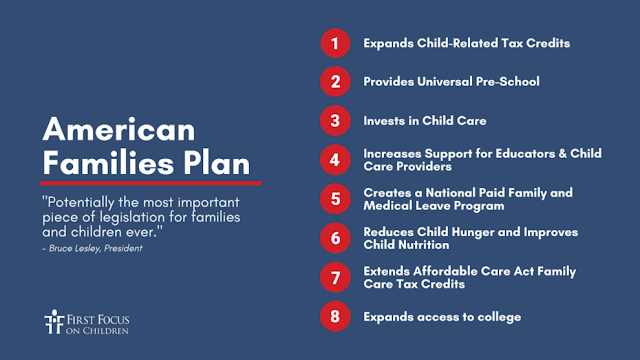 Biden's American Families Plan will be a key focus of his local visit.

Biden is expected to tout the benefits of the American Families Plan, the expanded Child Tax Credit, and his $973 billion bipartisan infrastructure deal. The latter includes money to build a national network of electric vehicle charging stations, purchase thousands of electric buses, upgrade the electrical grid, spend $55 billion to improve drinking water and wastewater systems, and $47 billion to tackle climate change.  MCC, a community college leader in educating workers in industrial, agricultural, business, and medical fields is a perfect spot to highlight his educational plans including community college tuition support and some level of student loan forgiveness. 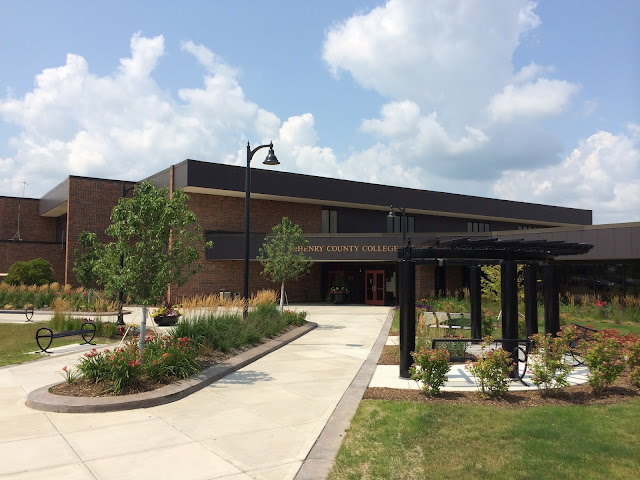 
There is general excitement here.  Some folks hope that he will somehow include a visit to downtown Crystal Lake on his trip.  Rumors swirl, unconfirmed.  The best bet to catch a glimpse of Biden will probably be on the grounds of the college but access will be limited with parking confined to a remote lot requiring a considerable hike.

MAGA morons are planning demonstrations, but they will be held well out of sight.  A heckler or two might get into the event.  Meanwhile excited Democrats want to turn out in support and some on the left maybe on hand to demand immigration reform, gun control, and Medicare for All.

With a hurricane bearing down on Florida and the East Coast, the final evacuation of most troops from Afghanistan, and a surge in Covid-19 Delta variant infections, hospitalization, and deaths in anti-vax Red states, don’t expect more than a couple of sentences sound-bite tonight on the evening news.

But we mere provincials will be talking about it for quite some time.

Posted by Patrick Murfin at 8:33 AM