Two Years Ago Lights for Liberty Shined in Woodstock

The crowd listens to speakers at the Woodstock Lights for Liberty rally.  The McHenry County government center looms behind the fenced off parking lot with the Jail on the left.  Immigrant detainees are held on the fourth floor. Missy Funk photo.

Note—The fight for immigration justice and against detention began well before the Coalition to Cancel the ICE Contract in McHenry County swung into action last year in the midst of the global Coronavirus pandemic.  The Latino Coalition, McHenry County League of Latin American Citizens (LULLAC), and the old Unitarian Universalist Congregation in Woodstock organized the first march from the Square to the County complex back in 2007.  Since then, there were many marches and vigils, large and small.  Immigration was a key issue at the hugely successful Hate Has No Home Here march around Woodstock Square and rally in March 2017.  But the largest rally at the Jail, Lights for Liberty Woodstock, was held two years ago on July 12, 2019.  This is an account of that event that I posted on the Blog the next day.

In more than 50 years as an activist it was the first time I remember a crowd gathering to the sounds of a sousaphone ensemble.  Sousaphones Against Hate lent a joyous Wisconsin brat and beer vibe to the steady stream of folks carrying signs and folding chairs who were filling the grassy strip along Route 47 to participate in Lights for Liberty Woodstock, the rally and vigil at the McHenry County Jail/Immigrant Detention facility.  It was one of more than 500 such events across the country in addition to a number of other anti-ICE marches and protests in cities great and small—an eruption of Resistance to the terrorizing and oppression of immigrants and asylum seekers.

Organizers and volunteers had been working overtime for weeks to make the event a reality.  We coordinated our efforts through conference calls facilitated by Leni Manaa-Hoppenworth and Scott Cross of Indivisible Illinois—an indispensable asset and major co-sponsor of the event.  Volunteers, many of whom had never met or worked together before, came from all over the Chicago area joining local lead organizers Patrick Murfin, hereafter known as the Old Man of the Tree of Life Unitarian Universalist Congregation Social Justice Team, and Elisabeth Hubbard of Lake County.

Together we shared tasks and responsibilities, lined up 11 other co-sponsoring organizations, recruited speakers, attended to innumerable logistic and support details, and finally assembled, with some last minute juggling a coherent and effective program that would discuss the many aspects of the current crisis.  Elisabeth Hubble acted as our registration person for speakers, stage manager, and general major domo who kept the program running smoothly.  The Old Man was joined on stage by immigration attorney Lillian Gonzalez as co-hosts. 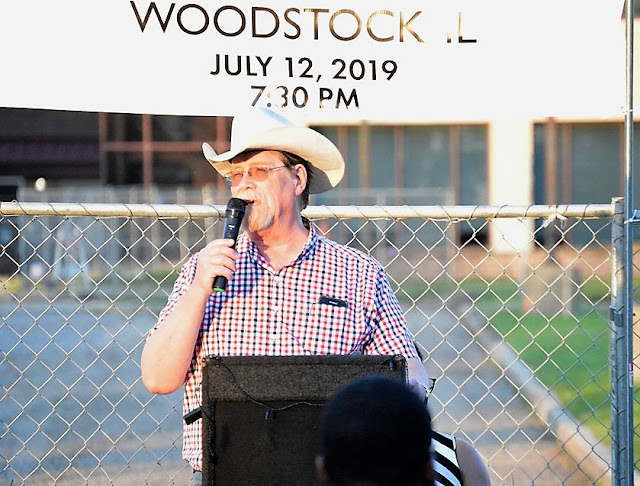 The Old Man as a co-host of the rally. Dawn Anderson photo.


Earlier in the afternoon after some semi-comic glitches we managed to drag a rented 4 X 8 foot stage section and a battery powered p.a. podium half a block and set them up near the chain link fence that blocked off half of the jail parking lot which was under re-construction.  We met with friendly but firm Sheriff Department officers, who told us that unlike previous similar rallies in the same location, we could not set foot on any of the parking lots surrounding the Jail, Court House, and County government complex.

Our experienced and efficient event marshals under the leadership of Dee Darling—veterans of several marches and events on Woodstock Square—helped folks safely cross Rt. 47 from parking at the school across the street.  As we made last minute arrangements around the stage—the p.a. system on the podium emitted screeching feedback and we were rescued by Scott Cross’s small portable unit with a hand-held microphone—and as the sousaphones played the swelling crowd spread out along Rt. 47 holding up hand-made signs to the busy street traffic passing by.  Many cars honked their support.

Promptly at 7pm we began the rally program.  The crowd turned to face the stage and was continually reinforced through the evening.  At its peak the press and several experienced crowd estimators figured that 400-500 were in attendance. 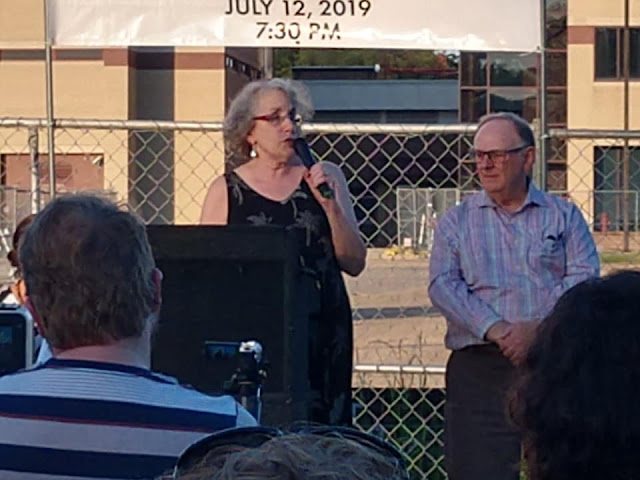 
After a welcome and some brief house-keeping announcements the program began with Marilee Gordon, the retired Rabbi Emeritus of the McHenry County Jewish Congregation, a leading member of the interfaith group Faithbridge, and a jail visitor for the Interfaith Community for Detained Immigrants (ICDI).  She grounded her remarks in the requirements to welcome and harbor immigrants and strangers found in the Torah and Talmudic teachings as well as in the Christian New Testament, and Islamic scripture. 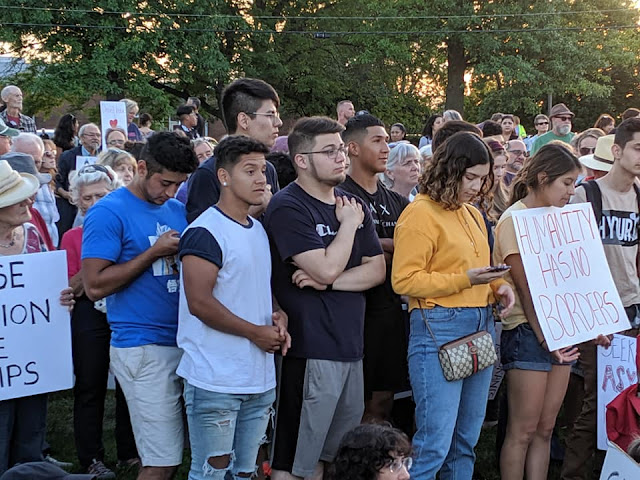 
She was followed on the stage by Melanie Schikore, Executive Director of ICDI who put a personal face on people detained in the McHenry County Jail and other detention center and ended with the admonition that we all must work to free those who are held, often in terrible conditions in the border camps, demand that the government’s punitive immigration policies be reversed, and demand that ICE, the stormtroopers for enforcing that policy, be abolished.  She was the first of many speakers to reference the nation-wide family raids that have been touted the administration and which striking terror in many communities. 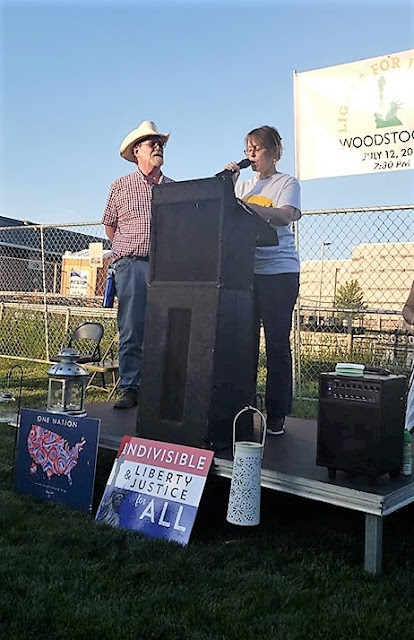 
Dave Trost representing McHenry County Progressives read a moving message from a detainee at a one of the Illinois detention centers.  Sara Crosental, a young woman from Rising DREAMERS Unite recounted her personal story of being awakened by armed, unidentified men in black crashing into her family home to drag her father away.

Carol Huntsinger, a Lake County church musician led the crown in the first song of the evening, the Civil Rights anthem We Shall Overcome.  Later veteran singer/guitarist Norm Siegel, who the Old Man has known since the days of the Earl of Old Town and the great Chicago folk music scare fifty years ago led a rousing rendition of Woody Guthrie’s This Land is Your Land and began the candlelight vigil with the familiar spiritual This Little Light of Mine. 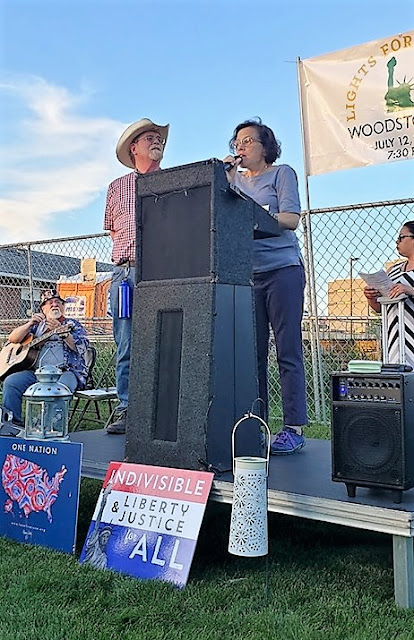 Lea Grover of the Rape, Abuse & Incest National Network (RAINN) discussed the sexual abuse and violence that many women and children endure not only in detention custody, but by employers, husbands, mates, and others who know that the victims will be unlikely to report crimes for fear of being exposed to arrest and deportation.


At this point the Old Man needs to explain his near constant presence on stage.  Contrary to rumor, I was not just trying to hog the camera.  I had real trouble getting on and off of the 16 inch high stage platform, especially as the night wore on.

Co-host Lillian Gonzalez spoke as a former undocumented alien who became a lawyer representing clients enmeshed in the system. 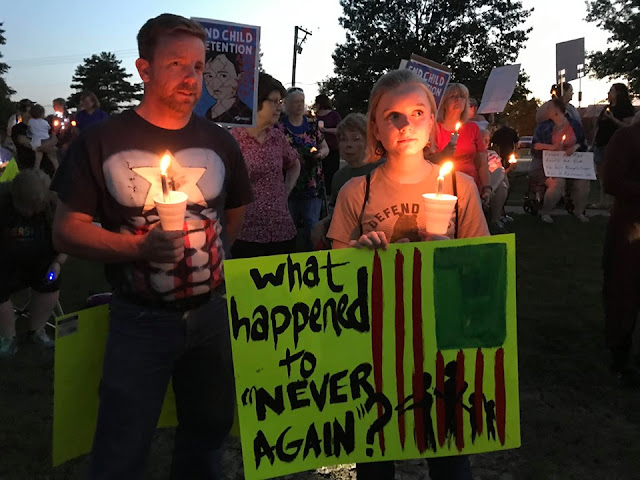 
Lisa Arvanites of McHenry County NOW spoke on the special dangers that members of the LGBTQ face especially trans women of color who endure a triple whammy of discrimination and marginalization face.

Kristina Zahorik, the Chair of the Democratic Party of McHenry County and of the Illinois Democratic County Chairs Committee, told of her personal political re-awakening after the disastrous 2006 election that brought Donald Trump to power along with enlarged majorities in the House and Senate and control of most state governments.  She was given hope by the groundswell of activism that returned the House to a Democratic majority including new Representatives Lauren Underwood and Sean Casten, brought J. B. Pritzker to the Governorship, and elected 5 Democrats to the county Board. 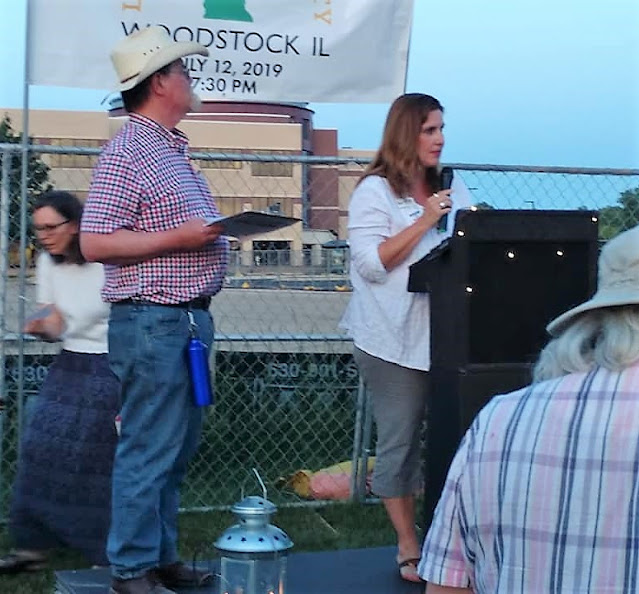 Scott Cross, Executive Director of Indivisible Illinois spoke to actions folks can take moving forward including keeping regular contact with state and Federal legislators and office holders to demand action on immigration and other critical issues; being ready to take to the streets in more actions, rally, and marches including civil disobedience; actively working on upcoming campaigns, and most importantly joining or starting grassroots organizations working to effect change.

As the final speaker of the evening finished volunteers distributed vigil candles to those who didn’t bring their own which were lit as the gloaming settled in over the Jail.  After a period of song and silent witness a car caravan from Aurora organized by Stand and March and Uni2 arrived.  They processed though the hushed crowd carrying seven white wooden crosses representing the five children known to have died this year in custody, and Oscar Alberto Martinez his 23-month-old daughter Angie Valeria who drowned trying to cross the Rio Grande to seek asylum.   They placed the crosses in a row by the stage and knelt behind the crosses.  No vestige of whispering or rustle of a distracted crowd lingered.  After several minutes of silence Casotio “Casey” Cuevas spoke emotionally on behalf of the members of the caravan. 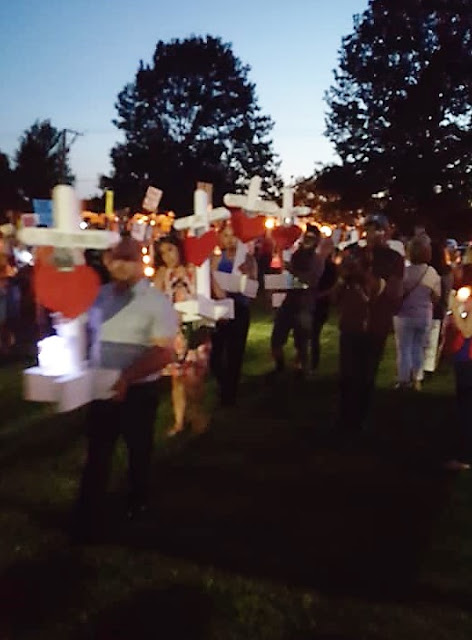 
When the vigil wound down, volunteers quickly took down the stage and carted it, table, chairs, bottled water and other items to vehicles.  One of the last volunteers on the grounds was the tireless Missy Funk of McHenry County Progressives and Woodstock Pride looked up and saw lights flashing in the slit windows of the Jail’s fourth floor where immigrant detainees are held.  They were aware of the vigil and that folks on the outside had not forgotten them.  They were flashing, probably at risk of punishment, a thank-you. 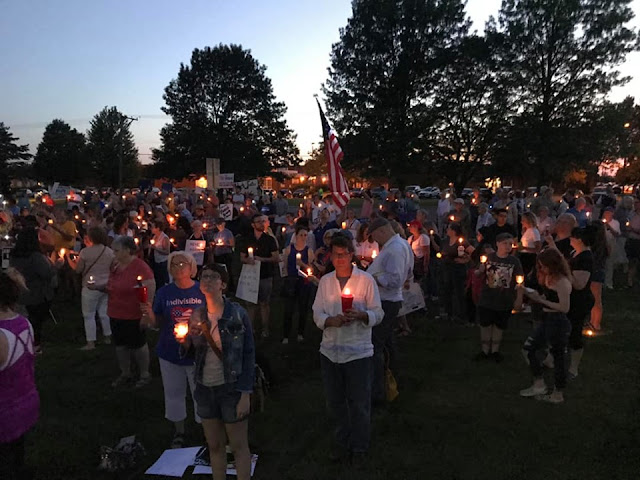 Posted by Patrick Murfin at 6:46 AM